Winter cover crops in Iowa corn-soybean systems are mostly limited to small-grains species like cereal rye or winter wheat because of their abilities to 1) germinate under soil temperatures occurring near or after corn and soybean harvest in the fall; and 2) overwinter to the following spring.[1] Cover crop variety trials conducted by PFI cooperators from 2013-2017 bear this out: Cereal rye, winter wheat and winter triticale routinely out-performed brassica and legume species in terms of fall and spring groundcover when overseeded into standing corn and soybeans in early fall.[2–5] 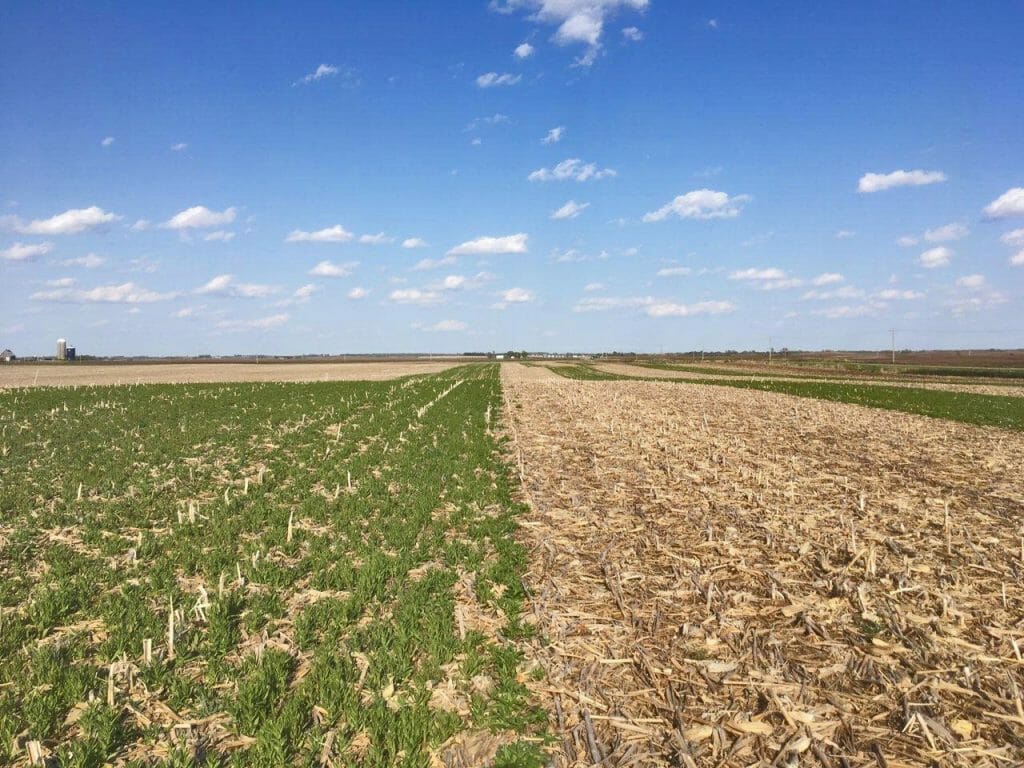 Strips of camelina cover crop and no cover crop at Bill Frederick’s farm near Jefferson on May 4, 2019. The camelina was seeded Oct. 5, 2018.

Even so, farmers who have used cereal rye cover crops for over five years have begun to express interest in finding alternative, successful, non-small-grains cover crops for corn-soybean production systems. Dr. Andy Lenssen, professor of agronomy at Iowa State University, has recently been experimenting with camelina, a winter-hardy brassica species that has shown promise as a cover crop in experiments conducted on university research stations. In 2018, Dr. Lenssen presented an opportunity for PFI cooperators to try camelina as a cover crop on their farms. He offered the seed and in exchange the cooperators planted strips of camelina following corn or soybean harvest.

“I am interested in finding different cover crop species that will help my succeeding corn crop perform better than following a cereal rye cover crop,” Rob Stout said about his motivation for conducting this trial. “I’ve wanted to see camelina in action for a couple years,” Bill Frederick said. Wendy Johnson echoed both Stout’s and Frederick’s sentiments: “I am interested in alternative crops and cover crops to use in Iowa. Depending on this trial’s data, we might use camelina on our farm.”

All three cooperators seeded a camelina cover crop in Fall 2018 with seed provided by Dr. Andy Lenssen, Iowa State University Department of Agronomy. Frederick seeded the camelina into corn residue; Johnson and Stout seeded into soybean residue. Cover crop and crop management details for each farm are provided in Table 1. 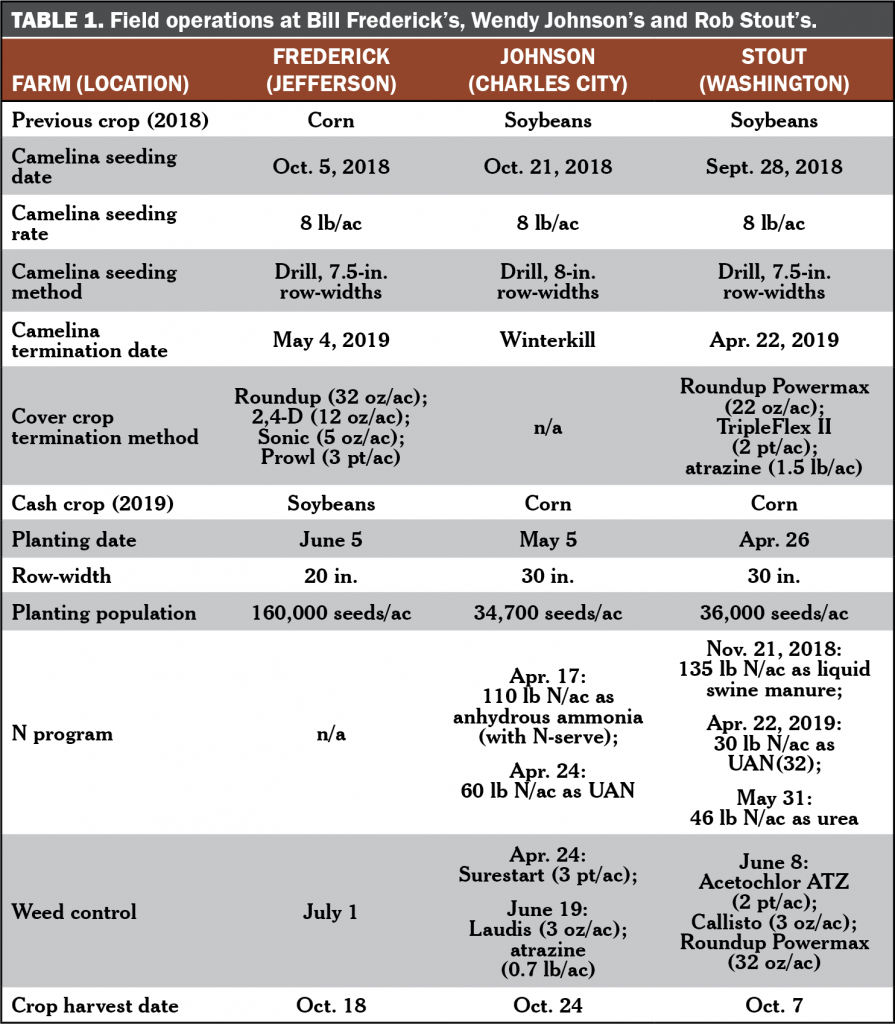 To test the effect of the camelina cover crop on cash crop yield, each cooperator compared two treatments:

After the camelina emerged from the soil, Dr. Lenssen travelled to each farm to determine stand densities within one month of the seeding dates. This occurred on Oct. 17, 2018 at Frederick’s; Nov. 8, 2018 at Johnson’s; and Oct. 18, 2018 at Stout’s. The following spring, each farmer estimated the height of the camelina prior to termination and cash crop planting. In Fall 2019, the cooperators harvested the cash crop from each individual strip; corn was corrected to 15.5% moisture and soybeans were corrected to 13% moisture.

To evaluate any effects of the camelina cover crop on crop yield, we calculated the least significant difference (LSD) using a t-test. If the difference in yield resulting from the two treatments was greater than or equal to the LSD, we considered this a statistically significant effect. On the other hand, if the difference resulting from the two treatments was less than the LSD, we considered the treatments to be statistically similar. We used a 90% confidence level to calculate the LSDs, which means that we would expect our findings to occur 9 times out of 10. We could make these statistical calculations because the cooperators’ experimental designs involved replication and randomization of the camelina cover crop and no-cover-crop treatments (Figure A1).

The camelina was roughly 6 in. tall at Frederick’s on May 4, 2019 prior to chemical termination and subsequent soybean planting. At Stout’s, the camelina was roughly 11 in. tall on Apr. 24, 2019 prior to chemical termination and subsequent corn planting (see photos). The camelina did not successfully overwinter at Johnson’s (the most northern location of all farms involved). “We had cold rain and freezing conditions during much of November [after the camelina germinated]. We didn’t get snow cover until mid-January [2019],” Johnson said. Dr. Andy Lenssen, who collaborated on this project, reported that camelina has survived winters in experimental plots in central, southwest and northwest Iowa: “Snow cover seems to become important when temperatures get colder than -20° F, especially if seedlings were exposed to comparatively warm conditions that caused some loss of dormancy.” 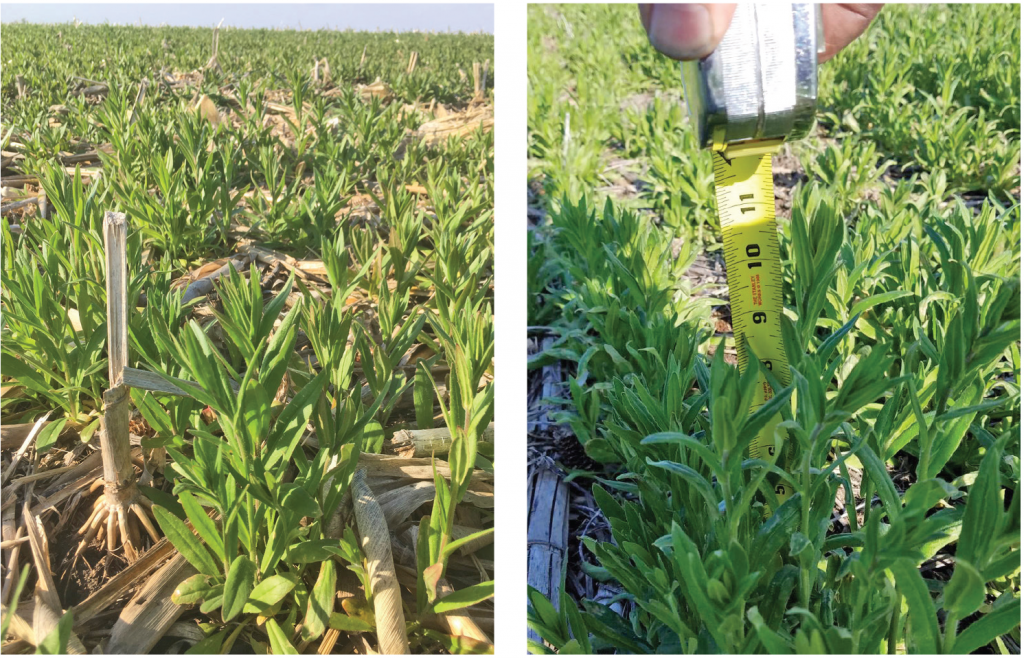 Compared to the no-cover-crop control, the camelina cover crop had no effect on soybean yield at Frederick’s nor did it have any effect on corn yields at Johnson’s or Stout’s (Figure 1). 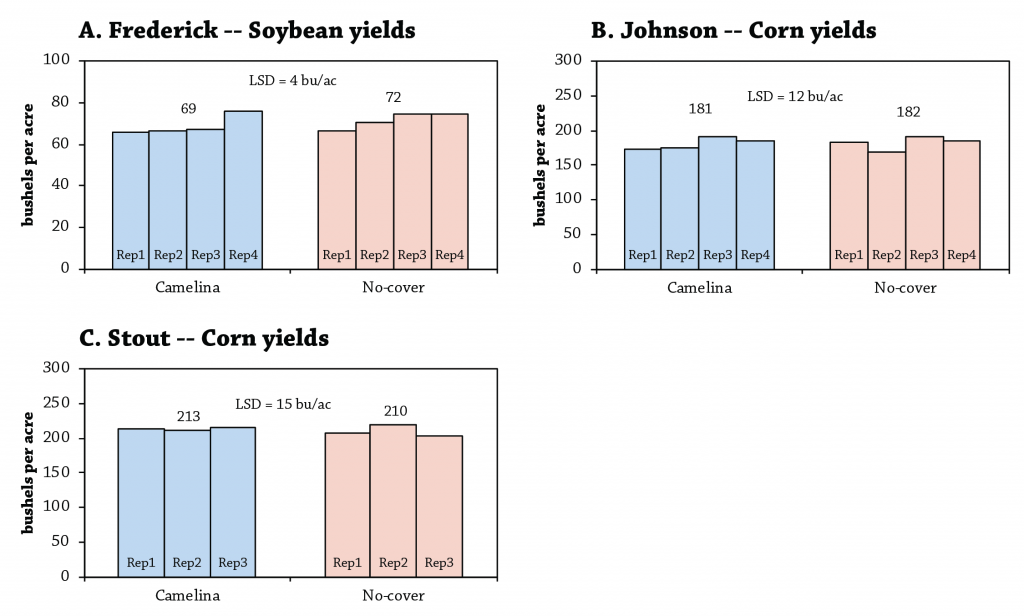 Figure 1. Crop yields at A) Frederick’s; B) Johnson’s; and C) Stout’s. Columns represent individual strip values. Above each set of columns is the treatment mean. By farm, because the difference between the treatment means is less than the least significant difference (LSD), the treatments are considered statistically similar at the 90% confidence level. Click to enlarge.

Across the three farms, the camelina cover crop had no effect on soybean or corn yields. This is an important finding that echoes the results of a long-term on-farm project coordinated by Iowa Learning Farms and PFI. The cereal rye cover crop in that study had a mostly neutral effect on corn and soybean yields.[7] It is also important for those who might desire diversifying their fall-sown cover crops instead of solely relying on cereal rye. “I think camelina has a lot of potential as a cover crop,” Bill Frederick said. “Low seeding rates because of its small seed size will lower application costs.” The camelina successfully overwintered on Frederick’s farm near Jefferson in west-central Iowa. Though, because the camelina cover crop failed to overwinter at one farm in this trial (Wendy Johnson’s near Charles City), more work on best management practices should probably be conducted before broader adoption of camelina as a cover crop in Iowa.

Figure A1. Sample experimental design used by the cooperators. The design includes randomized replications of the camelina cover crop and no-cover-crop treatments. This design allowed for statistical analysis of the results. Click to enlarge.

Figure A2. Mean monthly temperature and rainfall for Oct. 1, 2018 through Oct. 31, 2019 and the long-term averages at the nearest weather stations to each farm.[8] A) Jefferson (Frederick); B) Charles City (Johnson); C) Washington (Stout). Click to enlarge.