This project was funded by Ceres Trust; Seed provided by Johnny’s Seeds and High Mowing Seeds 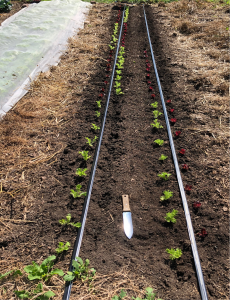 Salad greens are prized crops for vegetable growers. During 2017 and 2018 farmers conducted variety trials on head lettuces to search for the most heat-tolerant varieties for their farm.[1,2] Jordan Scheibel and Jon Yagla were interested in a similar variety trial comparing production of Salanova varieties with Eazyleaf varieties for mini-heads and salad mix, particularly during the hot summer months. Scheibel said, “I have been using Salanova varieties on my farm since 2016 and have found them to be anecdotally superior to the other one cut lettuce varieties. However, I have yet to find a red leaf Salanova variety that I really like so I wanted to do a trial to see if one of the Eazyleaf varieties would fit into that slot for me.”

Both farmers planted four replications of lettuce varieties in randomized, replicated trials. Scheibel trialed three Salanova: Red Sweet, Red Butter and Red Oakleaf; and three Eazyleaf: Brentwood, Buckley and Stanford. Yagla trialed four varieties over three successions. Salanova at Yagla’s included Red Butter and Green Sweet; Eazyleaf included Ezrilla and Stanford. Information about varieties, including seed cost, can be found in Table 1. Varieties were selected based on farmer preference, similarity between Salanova and Eazyleaf varieties, and their production suitability for the summer. Seeds for the trials were provided by Johnny’s Seeds (Winslow, ME) and High Mowing Seeds (Wolcott, VT). 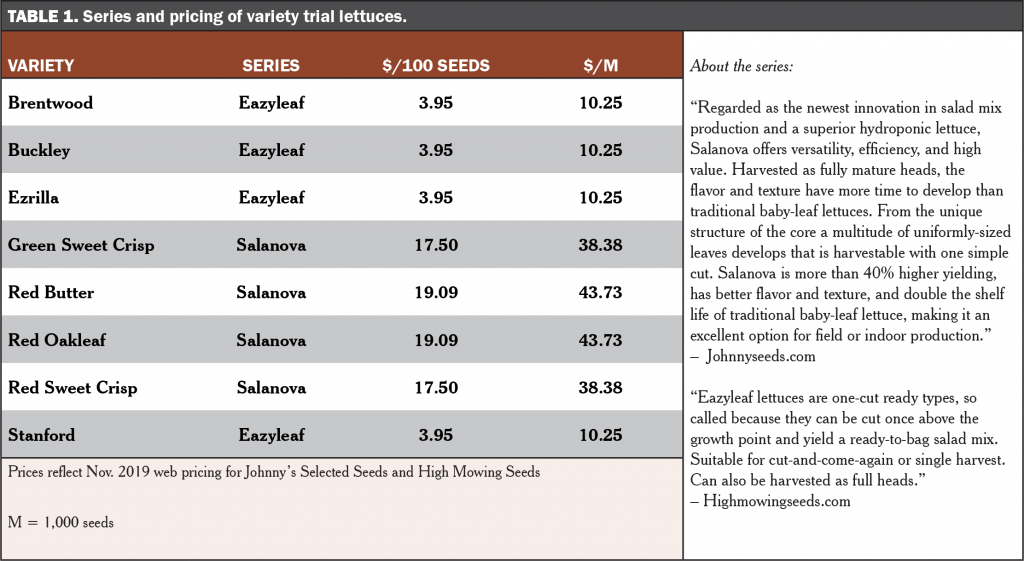 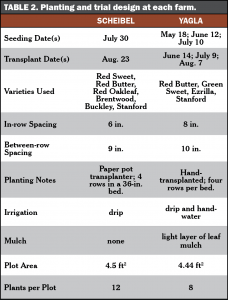 Production practices including mulching, spacing, irrigation, planting dates and harvest dates were determined by farm and are detailed in Table 2. Farmers collected yield data by plot, including the number of heads harvested and harvest weight. During each harvest they also scored each plot for issues with quality, specifically: bolting, flavor, bottom rot and tip burn.

Presence of these issues in each plot were scored as “Acceptable (A)”, or “Unacceptable (U)”. At times farmers marked A/U as a middle score. To create average scoring for quality, numerical values were substituted in the following manner: “U” = 0, “A/U” = 0.5, and “A” = 1.0. A score of 1.0 indicates that the farmer did not see any quality issues during harvest; scores closer to 1.0 indicate better quality. These scores were not statistically analyzed.

To determine the effect of variety on lettuce yield, we calculated Tukey’s least significant difference (LSD). If the difference in yield measurements for any two varieties was greater than or equal to the LSD, we confirm that variety had a statistically significant effect on yield. On the other hand, if the difference in any yield measurements was less than the LSD, we consider the varieties to be statistically similar. We used a 90% confidence level to calculate the LSDs, which means that we would expect our rankings to occur 90 times out of 100. We could make these statistical calculations because the farmers’ experimental designs involved replication and randomization of the three treatments (Figure A1).

At Scheibel’s, no variety managed a statistically significant difference in yield measurements, including plot weight, harvestable heads, head weight and Brix, as shown in Table 3 and Figure 1. Scheibel noted that his weed management was poor in this trial, and that it may have caused some head loss and smaller heads. 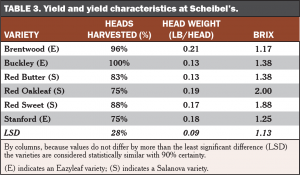 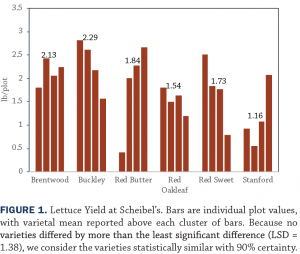 Scheibel observed the most bolting in Stanford and Red Butter; those two varieties also scored the lowest on flavor. Buckely, an Eazyleaf variety, was the only variety to have no issues with bolting during the trial. None of the varieties showed incidence of bottom rot or tip burn (Table 4). 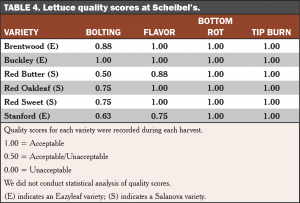 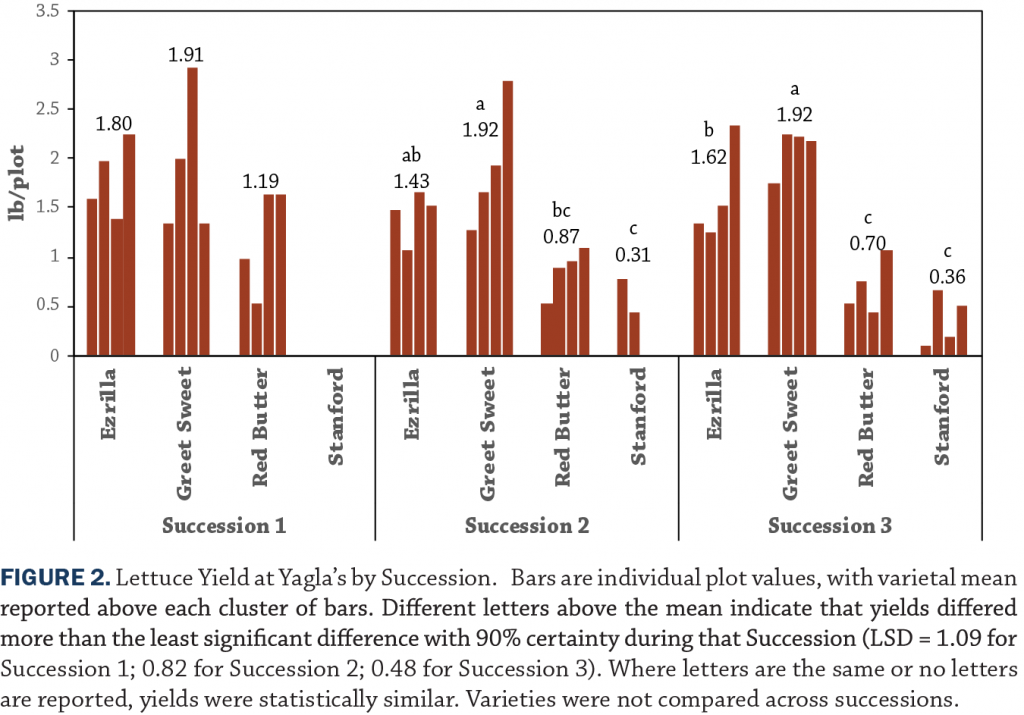 Yagla noted that Green Sweet Crisp, a Salanova variety, was the least susceptible to bolting, followed by Ezrilla, an Eazyleaf variety. Red Butter and Stanford both had issues with bolting, and Stanford had additional quality issues with bottom rot and flavor (Table 6). 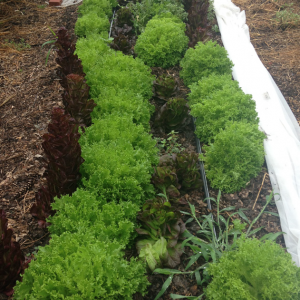 Differences in resistance to bolting between red and green varieties were clear in the field. Red Butter performed better than Stanford, for the red varieties at Yagla’s

Both farmers were impressed with how well the Eazyleaf lettuces compared to the Salanova lettuces, considering the difference in seed cost. Looking ahead at future production, Yagla decided not to continue with one-cut lettuces at all, instead saving the space for full-sized head lettuce which do well for him. Though Scheibel was impressed with some Eazyleaf varieties, he decided to only reorder Salanovas for 2020 production. “I liked the Salanovas better; I think they work better as a series. I did order more green varieties than red varieties, and particularly ordered more Green Sweet.”