Humans have been cultivating vegetables while raising children since the dawn of agriculture. But at a time when child-rearing has become less visible to young mothers-to-be – and vegetable farming is nearly as mysterious – starting on both adventures at the same time provides plenty of challenges. For two PFI families, however, the combination is also building a fulfilling life. 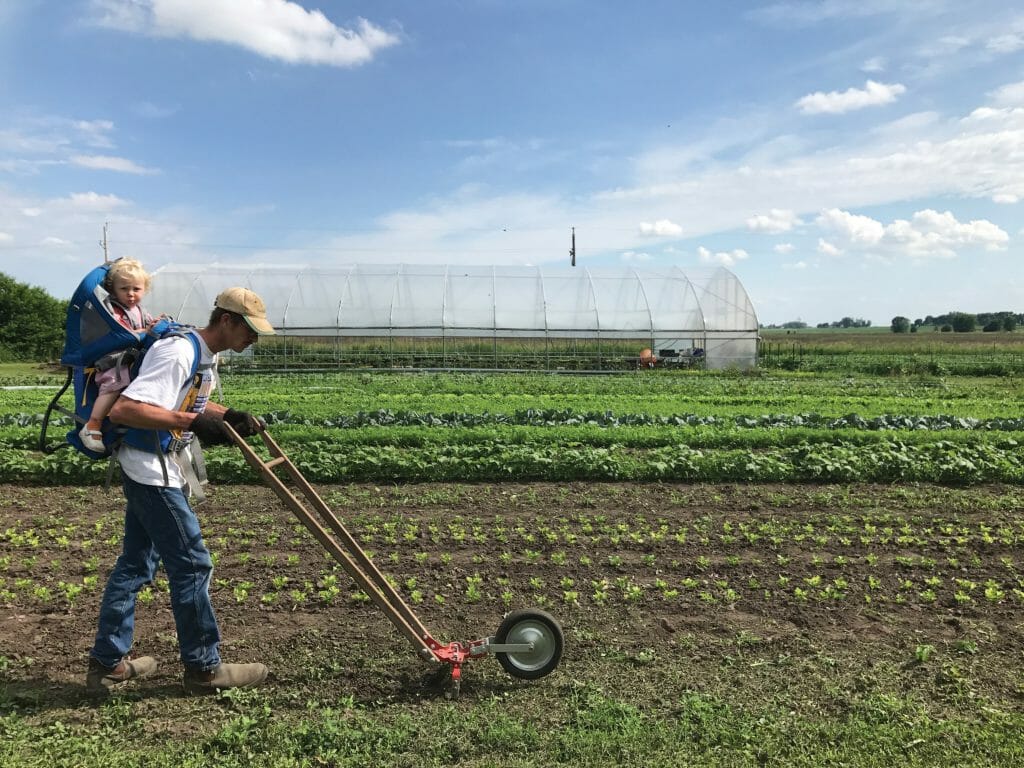 Young Jane Kaiser rides on her father Travis’ back while he works in the vegetable field.

Lindsay and Travis Kaiser own and operate Kaiser Farm, a diverse, certified organic vegetable farm on a corner of Travis’ family’s third-generation dairy farm near Waverly. Lindsay and Travis moved to the farm in 2013 while Lindsay was working full-time as the assistant produce manager at Hy-Vee. Travis was, and remains, the dairy’s primary milker and herdsman (in 2017, he and Lindsay bought half the dairy, while his brother, Russell, bought the other half). For 21/2 years, Lindsay worked full-time off the farm and was the primary vegetable farmer, doing markets on her two days off from Hy-Vee.

When they decided to have children, they knew they wanted to have them in the winter. “We definitely planned having kids around the vegetable season, and were fortunate it worked out,” Lindsay says. “I can’t imagine having a baby in the middle of the season – that would be the end of the season.” Their son, Weston, was born in December 2015, and daughter Jane followed on the last day of February 2018.

Though both were “winter babies,” the experience for Lindsay as a pregnant woman, mother and farmer was very different for each. “It was easier, baby-wise, with Weston, because I had all winter to raise the baby. By the time I was able to be in the field, he could sit up and was more aware, and other people could watch him more easily.” The first season after the baby, the Kaisers were ready with their support system, hiring two part-time employees to help with the vegetables and having Travis’ mom come over every morning, all summer, to watch the baby.

Lindsay was still doing the CSA with two drop sites, and sometimes would bring Weston along, with varied success. Toward the fall, when he was about nine months old, Weston began spending time in a stroller in the barn with Travis. “We’ve gone through at least half a dozen thrift store strollers,” Lindsay says. “They just get so dirty on the farm.” They would cover the carrier with insect netting, which has an elastic bottom to fit over carriers, strollers or pack-and-plays. 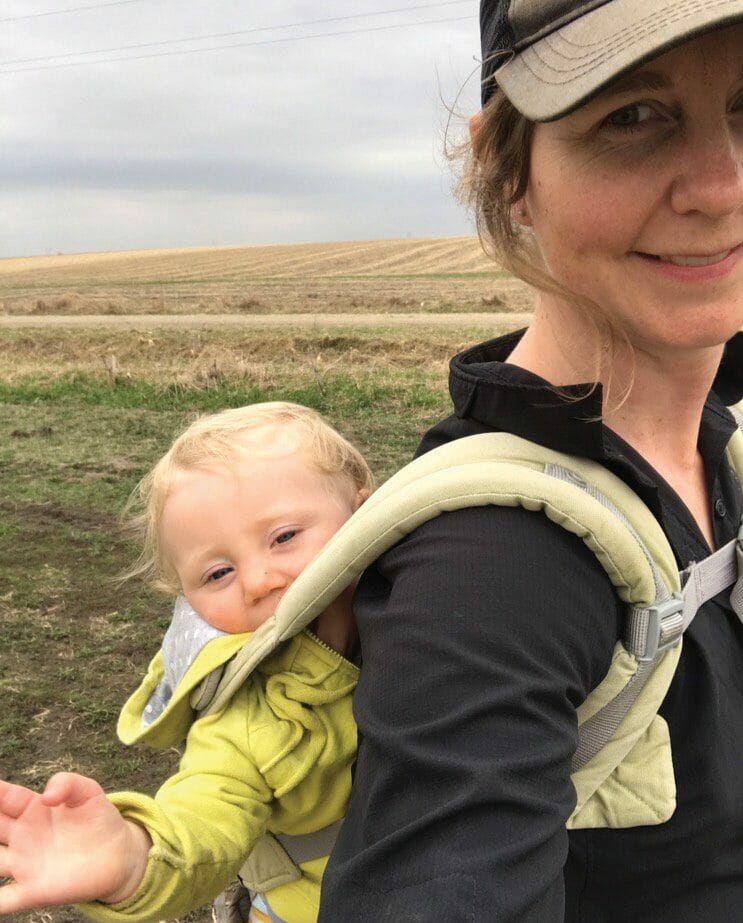 Jane Kaiser rides on her mother Lindsay’s back.

Though having Weston in December was beneficial for spring work, it meant being very pregnant during the height of the previous growing season. “I felt like I was 10 months pregnant when I was picking pumpkins. That isn’t even possible, but it felt that way,” Lindsay recalls. Like many first-time mothers, Lindsay was unprepared for the number of required check-ups and doctor visits, which were stressful and, for her, the physical toll of pregnancy on her body. She was also surprised by the fatigue, heat intolerance and forgetfulness.

“Once we had the baby, the support system made things easier,” Lindsay says. “But I would recommend to other women: Don’t wait until the baby arrives to gather your support network. You will need it while you’re pregnant.”

Preparing for Jane’s arrival in February 2018, Lindsay knew she needed to make a change. “With two kids, I knew I could not reliably run a CSA with just the two of us working the farm. I could expand to hire additional labor, or I could focus on a single market and raising two kids.” That year, Lindsay and Travis dropped the CSA and instead grew crops for just the Cedar Falls farmers market – notably peas, cherry tomatoes, greens and garlic. 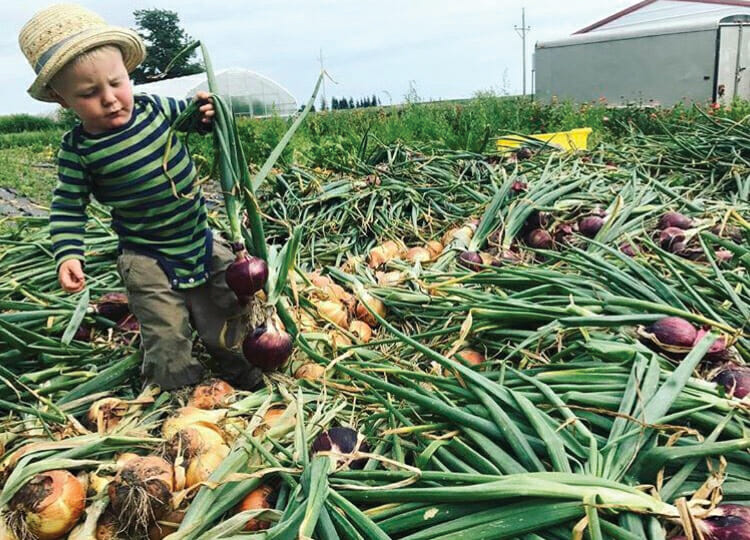 They altered their row spacing to accommodate their Farmall A, which made it possible for Travis to quickly cultivate the 3 acres, while Lindsay did the planting, harvesting, seeding and hand-weeding. An extra car seat in the car of Travis’ dad let Weston run farm errands with his grandpa much of the time, and Travis’ mom helped out with Jane many mornings. Lindsay’s mom would also come from Iowa City on Saturdays to watch the two children while Lindsay worked the farmers market.

I would recommend to other women: Don’t wait until the baby arrives to gather your support network. You will need it while you’re pregnant. – Lindsay Kaiser

In spite of the challenges, having children while working on the farm also came with some unique benefits. Field work kept Lindsay physically fit during her pregnancies. She had access to healthy, organic food. And the seasonality of the vegetable farm afforded her a sort of maternity leave. In hindsight, Lindsay realizes that running the CSA when Weston was a baby was hard on everyone. Aware of this, she and Travis have made changes to the business that work well with their family – and for their customers.

And, more CSA customers and friends are having babies, so Lindsay’s network of parents in Waverly is growing. Though she doesn’t often post photos of her children to social media, she does sometimes browse the posts in the “Farming with Babies and Kids” Facebook group for affirmation that they’re doing okay.

While Lindsay and Travis were planting the first seeds of their vegetable farm in Waverly, Amber Mohr and Jeremy Hall were doing the same, across the state in Avoca. In 2013, they moved to a farm with their children, Ernie, Lenora and Walden. At the time, Ernie was 6, Lenora was 3 and Walden was 6 months. The family timed their move based on when they had enough capital – but Amber and Jeremy did manage to have Walden while Amber was still working as a curator for an art museum in Lincoln, and thus still on her employer’s health insurance.

Jeremy, who does freelance editing for academic journals, has worked from home since Ernie was born and was the primary caregiver until the move to the farm, where the couple could share more of the child-rearing duties. Amber set up the vegetable production and marketing, while Jeremy took over chores for the layers and broilers while continuing to do up to 16 hours of editing per day (he says he functions fine on four hours of sleep).

Starting a farm with three young children meant starting small and having realistic expectations for both the farm and the childrens’ ever-changing role. For Amber, this often meant – and still means – changing her expectations to match the current reality. “My first year, I grew a lot of green beans because I had a good market for them,” she says. “But with small kids interrupting my harvest seven times per plant, it was impossible to keep my place in the field, harvest efficiently and get a good product to the cooler.”

She found the same issues for delicate greens, like salad mix. “I couldn’t get them cut and cooled quickly enough,” she recalls. “I learned I needed to grow sturdier things so I could leave the field to get someone on the potty.” The only easy-to-manage child the first year was Walden, who Amber says was afraid of grass and would stay on a blanket by the garden. 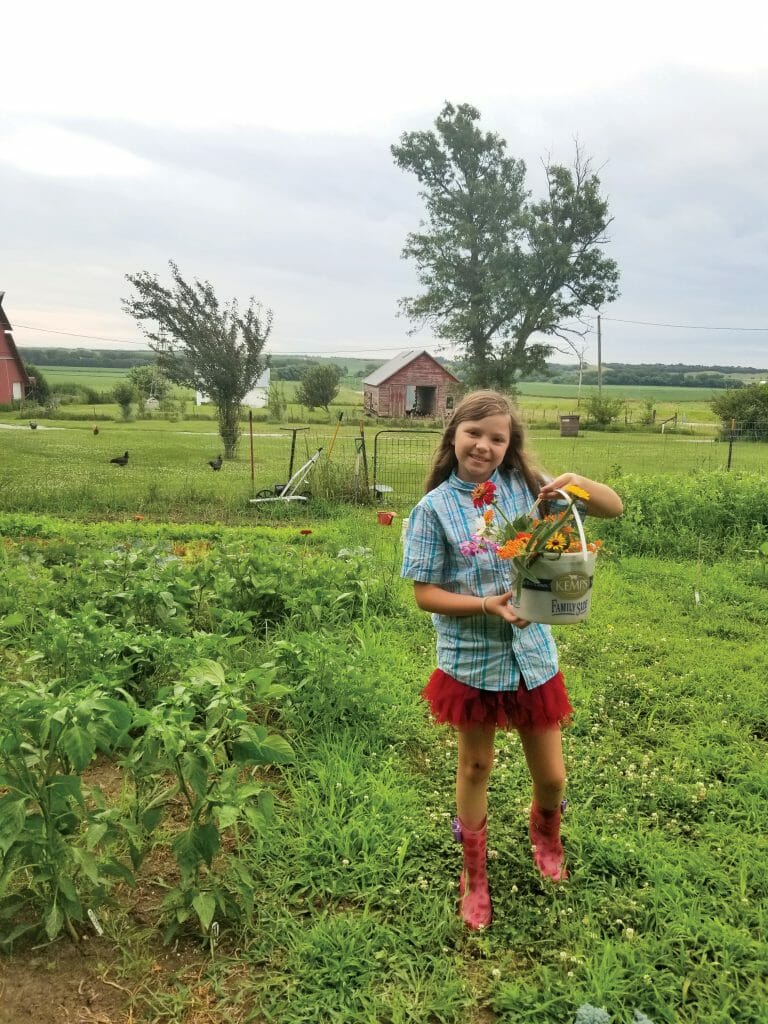 Len Hall before the 2019 market premiere of her flower business, Len’s Stems.

As the children grew, Amber and Jeremy had to be very clear about priorities: that the farm work is important, and that many things around the farm are not for play. Early on, pieces of equipment would be missing, like a removeable broom handle that had become a play bo staff. Amber and Jeremy started using a simple reminder – “tool or toy?” – to help the children recall what objects were fair game to play with. “The kids are really pretty good now about being safe on the farm,” Amber says. “But when other kids are on the farm, I learn over and over what becomes play things that I didn’t even think about.”

Amber notes that one perk of being a produce farmer is that you can change your crops every year. “Quick-growing crops wear on me and the kids,” she says. “I grow a lot more herbs than I expected to, which I sell to restaurants. I also focus on longer-season crops and cut-and-come-again crops. If it’s something I broadcast-seed, I’ll get what I can and then till in the rest.” Finding the right markets for crops she can manage, and maximizing her profit in the time she has, is essential, too. “Having kids is hard on your body, and being with kids all day can drain your energy. I can make $40 on basil in 10 minutes, or I can work an hour for $10 of lettuce.

”I grow a lot more herbs than I expected to, which I sell to restaurants. I also focus on longer-season crops and cut-and-com-again crops. – Amber Mohr

These days, the Mohr-Hall household has found its stride and relies on routines and good behavior to keep everyone happy. Ernie, now 12, loves helping with animal chores. Lenora, 9, helps harvest vegetables and manages some small areas of flowers that she sells through her enterprise, “Len’s Stems.” Amber knows there are times of the day that won’t be productive, but she plans her work accordingly. During the summer, the children get up when the 6:30 a.m. hall light is turned on and play together until around 10:30 a.m.

From then until 1:30 p.m., Amber is with the children – preparing a snack, then lunch, then getting them settled for the mandatory quiet time in the afternoon. From 2-4 p.m., Walden, 6, naps while the older children independently read, do art projects or build Dungeons and Dragons campaigns. This is Amber and Jeremy’s best time for focused work, until dinner prep starts around 4 p.m. After dinner, the house is again pretty quiet, with Walden in bed, the older children reading and the adults finishing up the day. 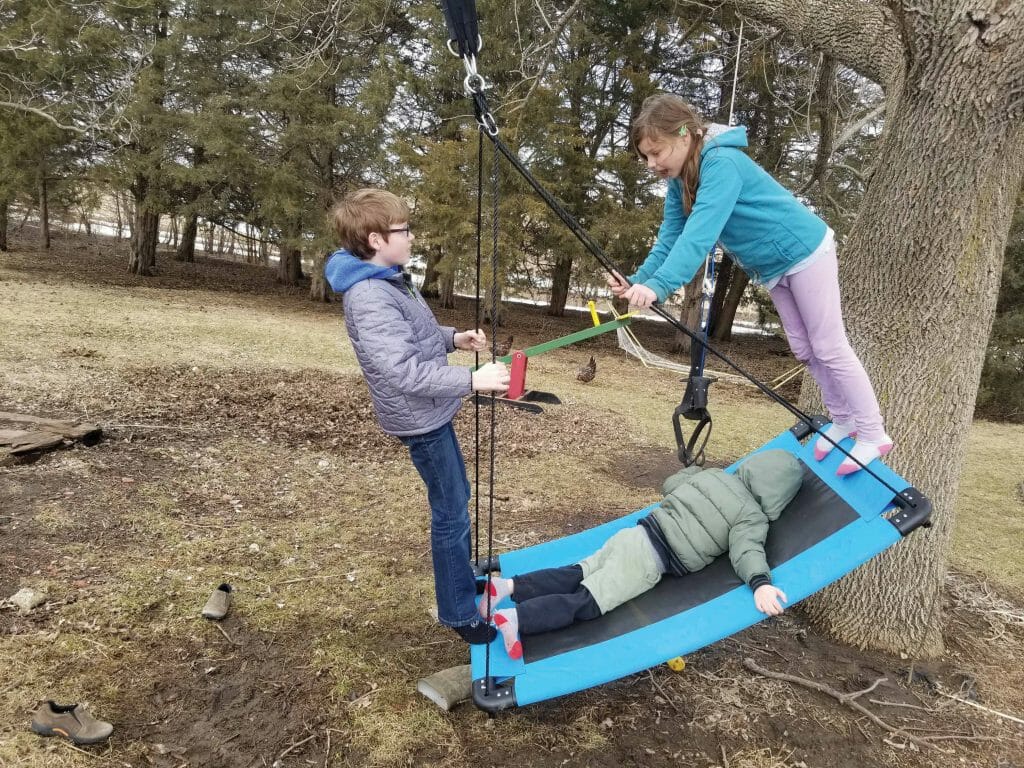 For the Hall siblings, at least half their outdoor time finds them all together on this swing.

Though the Kaisers and Mohr-Halls live across the state from each other with children of different ages, there are commonalities in their experiences. Both attend public library programs at least once a week and rely on their small-town communities for weekly excursions to the playground, for ice cream – and for Amber’s older children, to learn a multitude of skills working at the farmers market. Both sets of children spend a lot of time outside, and each has an affinity for different parts of the farm.

In Waverly, Weston knows all the names of the implements, while Jane is drawn to the animals, only subdued to napping by a lullaby from the clucking hens. Amber’s children have plans to build a separate house for their parents to move into someday, when their aging bodies are ready to limit their harvest to the newly planted apples, cherries, gooseberries and honeyberries. Ernie is an eager machinist and livestock worker. Lenora enjoys the harvest, and Walden, so far, specializes in tart and sour plants like rhubarb and green tomatoes.

A Focus on Community

Measuring Conservation on the Farm