Pruning is a common technique used by farmers because it allows the plant to divert its energy toward producing fruit instead of growing more foliage. Benefits include the plant producing larger fruit earlier in the season along with less pest and disease issues.

The objective of this project was to evaluate the impact of double-leader pruning on tomato yield and labor-time in the high tunnel. The growers hypothesized that overall yield will be lower from pruned plants, but pruning would save enough labor during harvest to offset the loss. 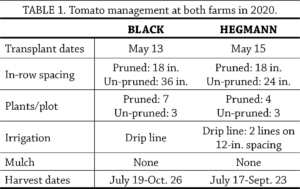 A randomized replicated trial of pruned vs. un-pruned tomatoes was conducted in the high tunnels of Maja & Carmen Black in Solon and Natasha Hegmann in Elkport (Figure A1). The variety used was Big Beef. The study had four replications of both treatments for a total of eight plots. The treatments were:

Tomato management used for both growers is presented in Table 1.

To evaluate any effects of pruning vs. not pruning on tomato yield, the least significant difference (LSD) was calculated using a t-test. If the difference in value was greater than or equal to the LSD, the treatment has a statistically significant effect. However, if the difference between the values was less than the LSD the treatments were considered to not have a significant effect on the values. For the Blacks’ measurements, we used a 95% confidence level for the calculations meaning we would expect our findings to occur 95 times out of 100. For Hegmann’s calculations, we used a 90% confidence level. These statistical calculations could be run because the growers experimental design included replication and randomization of the treatments (Figure A1). We did not conduct statistical analysis on labor. 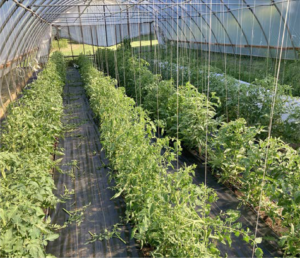 High-tunnel set up at Hegmann’s farm.

FIGURE 1. Time spent on labor at the Blacks’ farm divided by the task: weeding, trellising and pruning.

At the Blacks’, there was no difference in tomato yield for any of the measurements collected: plot weight, average tomato weight, number of firsts, number of seconds and the ratio of firsts to seconds (Table 2). At Hegmann’s, the pruned treatments produced larger fruits and the un-pruned treatments produced more fruits. Total plot weight, however, did not differ at Hegmanns (Table 3). 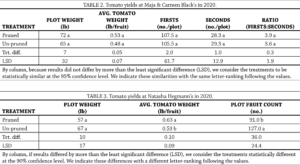 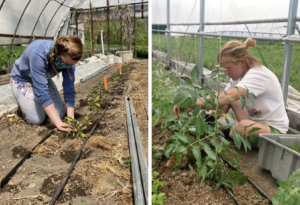 FIGURE A1. Cooperators’ experimental design consisted of two treatments that had four repetitions to compare the effect of double-leader pruning on labor and yield of the tomatoes. This allowed statistical analysis of the results.