The Journey to an On-Farm Research Project: A Student’s Tale

Have you ever watched a piñata party? A line of people, waiting blindfolded to sightlessly swing a stick at a cardboard animal filled with candy. There are lots of swinging styles. Some run towards it, wielding the stick overhead. Some do exploratory taps before committing to a swing. A few take three half-hearted swings then pass the stick, their party obligations fulfilled. Others whack with zeal, undeterred by their blindness. All of these approaches have merit, and it’s never clear which will actually break the piñata.

The Quest for a PFI Research Project

The path to crafting a meaningful on-farm research project can sometimes feel like a piñata party: a hazy endpoint, unsure of the shape or strategy. In January 2018, I left my home in Colorado to start a doctoral program at Iowa State University. I arrived in Ames to a week of sub-zero temperatures. I had gotten a master’s degree in sustainable agriculture at ISU a few years before, so I wasn’t fazed by Iowa’s winter welcome. The program I had done, fondly called Susag, is an ISU subculture.

And like any subculture, it has its own heroes, including the Leopold Center; Practical Farmers of Iowa; potlucks; and SARE grants awarded by the Sustainable Agriculture Research and Education program, a funding body that distributes federal money for research and education. SARE is one of the few places graduate students can apply for funding to support a project of their own design. When I started my doctoral program that snowy January, I still held these idolatries in my head. I had a goal of getting a SARE grant to work with PFI. I wanted those badges of honor to adorn my sustainable agriculture sash. The problem was I didn’t have a good idea of what to propose I should actually do with PFI. I went to the annual PFI conference a week after I arrived, hoping for ideas – and was quickly overwhelmed. Over the next few months, I wrote draft after draft of proposal ideas, but none seemed right. I was doing some exploratory taps, looking for the piñata, but wasn’t connecting.

In Pursuit of the Soil Sponge

As late March neared, and with it the deadline for the SARE proposal, I panicked. I started thinking through the lens of services I could offer farmers, rather than focusing on a research question I could answer. About the same time, I received a price quote for a full soil nutrient analysis on my doctoral research plots – it was scandalously expensive. The prohibitive cost led me to wonder if there was a particularly expensive, but useful, test I could do for PFI farmers.

I searched and found an analysis that is such a pain, and is so time-consuming, few researchers even do it: the soil-water retention curve. This test measures how much water your soil holds at a range of pressures. If you imagine your soil as a sponge, this measurement tells you how much water that sponge will hold. The results can help predict a soil’s ability to store water and supply it to plants. The more water a soil can hold, the better buffered a crop is against drought. Additionally, the shape of the curve reflects the soil structure and can tell you if your soil has large or small pores. These are both eminently useful insights that can guide management practices. The catch is, measuring the soil-water retention curve can take weeks to complete.

I scoured the internet and found just one study that had measured the soil-water retention curve in a corn-soybean rotation with and without a winter rye cover crop. Had I found a way to both contribute to science and work with Practical Farmers of Iowa? I broached the idea with Stefan Gailans, PFI’s research and field crops director, and he thought it was doable. I set about writing a proposal to measure the sponginess of the soil for PFI farmers. I was taking a full swing at the piñata, albeit blindfolded. To my delight, the project was funded! I’d busted the piñata and had a SARE grant to collaborate with PFI farmers. The next hurdle, however, was finding some of those farmers.

A Fork in the Road

In December 2018, nearly a year after I had first arrived in Ames, I attended the PFI Cooperators’ Meeting, hoping to connect with some farmers. As I sat and listened, I heard all sorts of questions. None were about soil-water. There was no proverbial candy coming out of the piñata. I did, however, notice there were a lot of questions about weeds. At one point in the meeting, someone said, to no one in particular, “Is there any way we can get a graduate student to do some weed measurements? That sure would be nice.” 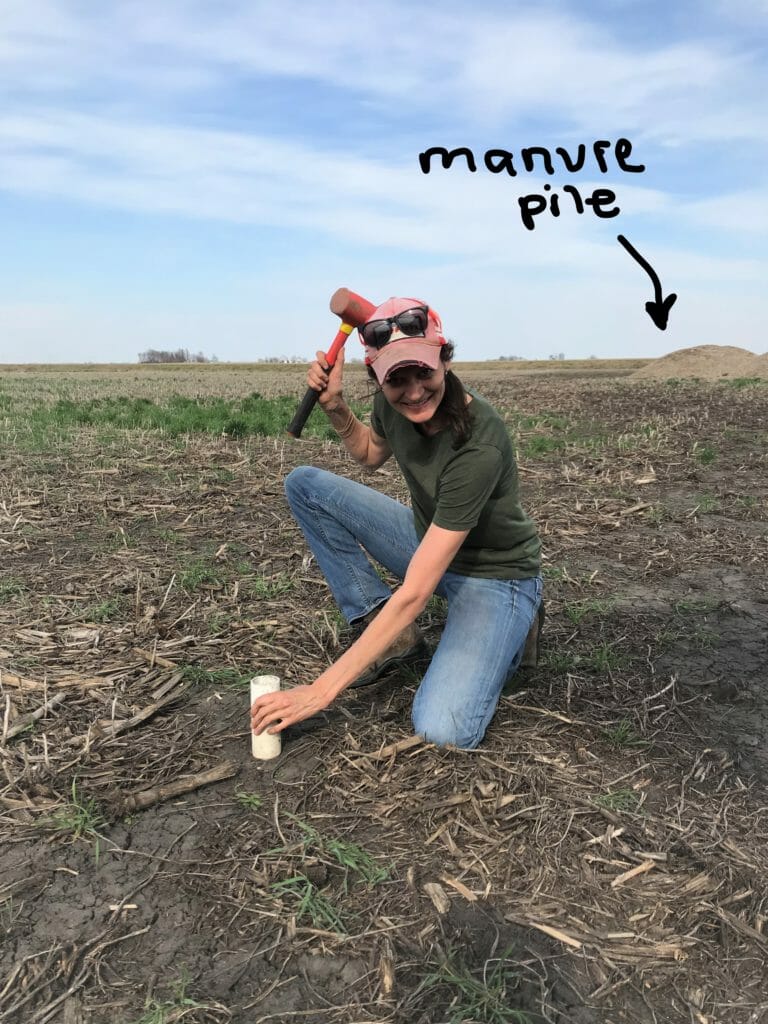 Gina Nichols samples the weed seedbank near what she says is “possibly the tallest point in Iowa.”

I now had two realities to reconcile – what the farmers wanted, and what I had thought would be valuable and had financial support to do. With some careful planning and a push from Sarah Carlson, PFI’s strategic initiatives director, I designed a double project. Both soil sponges and measurements of weed seeds require soil, so I would just sample soil for both questions. Rob Stout of Washington, Iowa, Jim Funcke of Jamaica, Iowa, and some U.S. Department of Agriculture folks had cover crop strip trials that were rounding their 10th year (20th year in the case of the USDA). Long-term trials are the perfect places to measure both weed seed banks and soil properties. I had nicked the piñata. With a little direction from the party crowd, I was able to crack that sucker open.

The Joy of Discovery

I commenced the execution phase of the project. I had an incredible support team that included Mickala Stallman and Wyatt Westfall, two undergraduate students who helped me without complaint. My advisor, Matt Liebman, and his lab were likewise always ready to help. Visiting the farms to get samples was a joy. One reason I love agricultural research is that it can take you into the depths of the countryside, where there are, without fail, treasures. Rob and Jean Stout’s house is near a massive collection of gas station signs. Jean fed me and my helper ham sandwiches and raisins, and we got pecan rolls from a bakery nearby.

The USDA plots are the oldest cover crop experiments in the Midwest; a niche tourist attraction, admittedly, but deserving of a visit. Jim Funcke’s field had a teetering pile of turkey manure, reminding me of the legend that the highest point in Iowa is on top of a manure pile. Jim may have been eligible to claim that honor that year.

My support team and I spent a lot of the summer watering weed seedlings, and I spent a few weekend evenings literally watching soil dry. It was a blast (I write that without irony). I found that the plots that had been cover-cropped for 10-plus years had less waterhemp seeds – exciting, as waterhemp is resistant to many common herbicides. I also found the soil 10 centimeters deep wasn’t affected by cover cropping. This is also important information, as it helps us have realistic expectations for what cover cropping can provide.

So what is the moral of this double-project? My takeaways are as follows: (1) If you worry excessively about asking the perfect question, you will never ask anything. Someone needs to take a swing at that piñata, no matter how ugly that swing might be. (2) Simply accumulating experience is valuable. I’m a better scientist for having done both projects. Every swing contributes, hit or miss. I would venture that many PFI members have had an instance where they, like me, felt like they had swung at, but completely missed, the piñata. But the wait I see it, just by swinging you’re contributing to the party. Moreover, I think swinging is the fun part.

Cereal Rye for Weed Management: A New Tool in the Toolbox?

Does Cover Cropping Change the Sponginess of the Soil?