Does Cover Cropping Change the Sponginess of the Soil?

Cover crops offer several well-documented benefits to agriculture. Some benefits are not as well-studied as others. For example, cover crops may increase the amount of water a soil can hold, which would mean crops grown in systems that utilize cover crops would be better buffered against drought conditions. This idea has a theoretical basis, but has not been well-studied in field settings. This is partially due to how difficult it is to measure the amount of water the soil can hold. 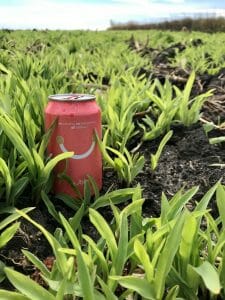 To understand how we can measure the soil’s water-holding capacity, imagine you just bought a new sponge. It holds a lot of water. After using it a long time, it seems like the sponge can’t hold as much water. You want to compare the sponginess of your old sponge to a brand new one. To compare them, you let the sponges sit in a tub of water over night. In the morning, you take out one sponge and squeeze it super hard over a bowl. By measuring the amount of water that came out of the sponge, you know how much water that sponge can hold. You do that for the other sponge. Now you can directly compare the two sponge’s water-holding capacity.

To see whether cover cropping can increase the amount of water soil can hold, I did that sponge experiment, but with soil. 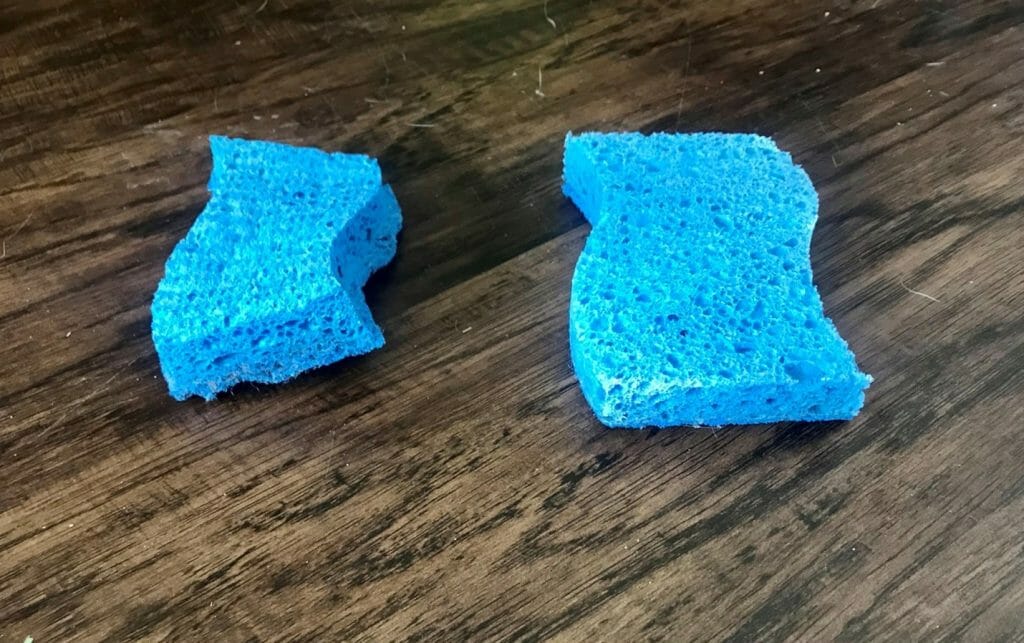 With the help of Practical Farmers of Iowa (PFI), Sustainable Agriculture Research and Education (SARE) funding, and the U.S. Department of Agriculture (USDA), I recently (depending on your definition of recently, I suppose) visited three long-term cover crop experiments in Iowa. 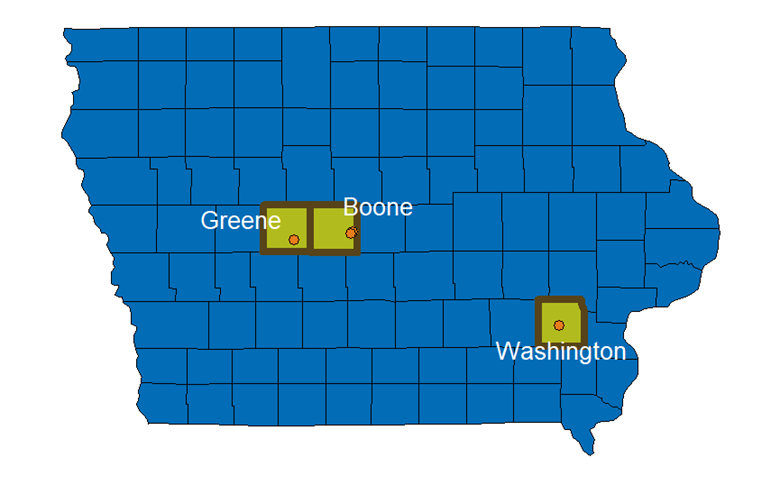 The Greene and Washington county experiments were on PFI Cooperators’ land, and were in corn-soybean rotations. The Boone county fields were experiments managed by the USDA, and they had two corn-soybean rotations: one where the corn was harvested for grain, and another where the corn was harvested for silage. All of the experiments have been no-till for at least 10 years. Additionally, each experiment had large strips where a winter cereal rye cover crop was planted every year, interspersed with strips that had no cover crop planted. 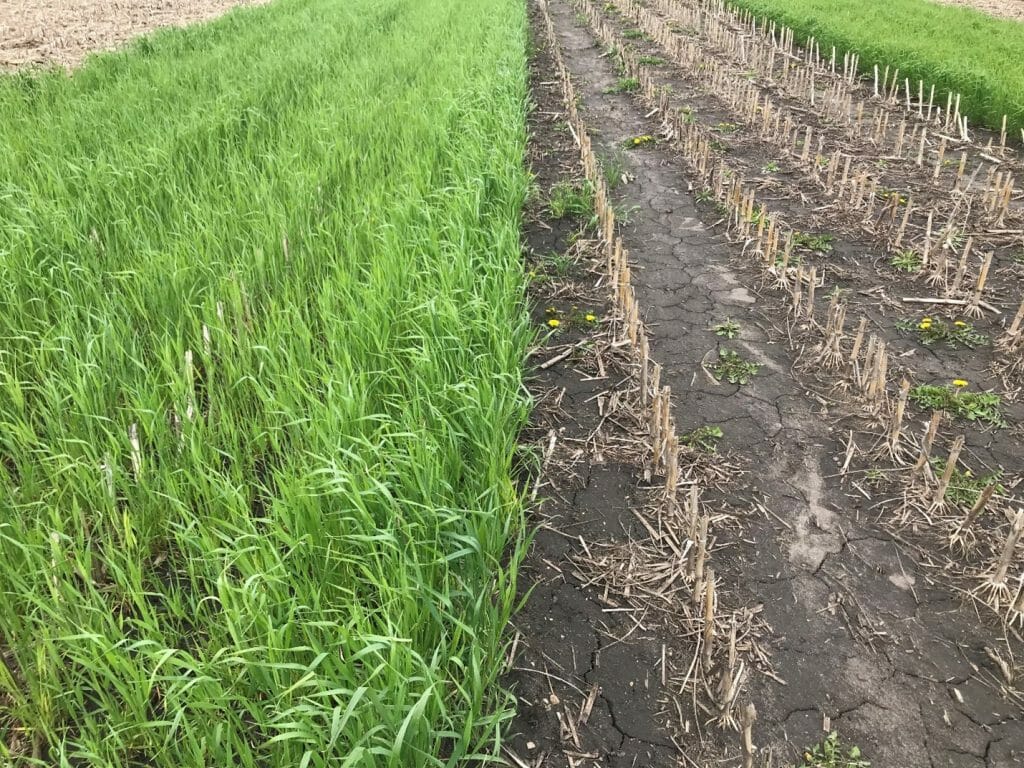 These cover and no-cover strips had been in the same place, managed without tillage, for at least 10 years. Long-term, replicated cover crop experiments at multiple sites. Truly a researcher’s dream for testing whether cover crops can alter the soil’s ability to hold water. 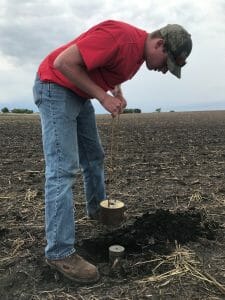 In the spring of 2019, I went to each field right after it was planted with the cash crop. In each strip in every field, I dug a hole four inches deep, then had my helper, Wyatt Westfall, pound a metal ring into the undisturbed soil.

We then dug up the ring and put it in a little cup with a lid. After doing that in every plot, we took all the cups back to the lab refrigerator.

Once I had visited every field, I commenced the tedious process of measuring the soil’s water holding capacity. 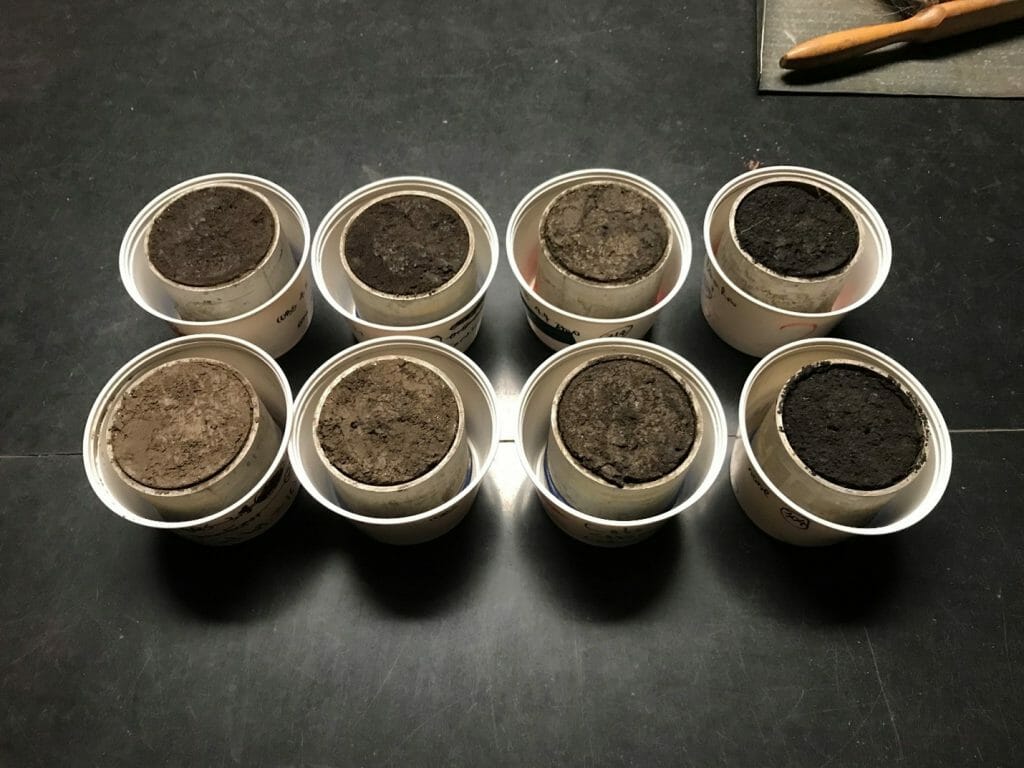 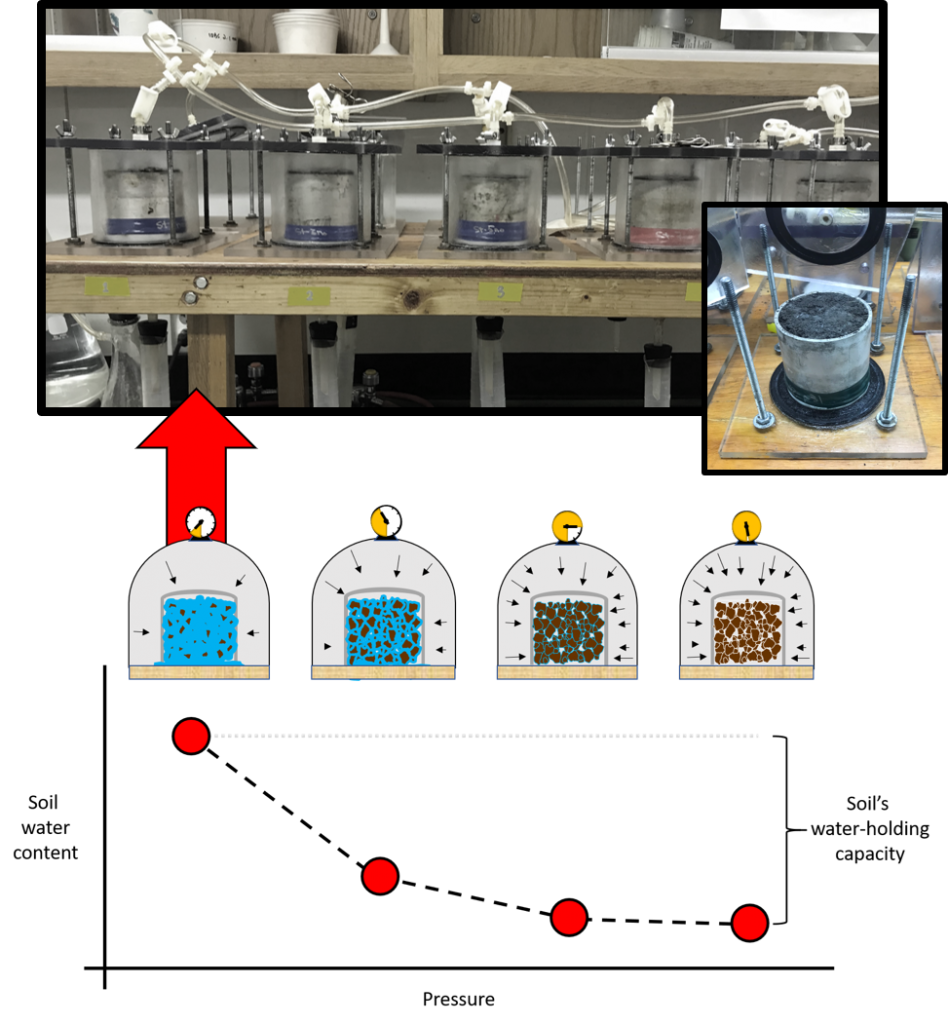 The Nitty Gritty About Soil Texture

Before I tell you the results, I want to take a step back. Dr. Anna Cates with the University of Minnesota wrote an excellent article titled “The connection between soil organic matter and soil water.” We can use her framework to think about how cover crops would affect soil’s capacity to hold water.

Soil can be thought of as having large pores between aggregates (pores you can see) and small pores inside of aggregates (pores that are harder to see). The large pores help with infiltration – they get water into the soil. Small pores hang on to the water, loosely enough for plants to use, but tightly enough that it doesn’t drain away with gravity.

Sandy soils will have lots of large pores, meaning water moves quickly through the soil. What they really need is organic matter to make more small pores to help hang on to the water before it leaves. On the other side of the spectrum, soils with higher clay contents might have trouble moving water through the soil. For example, clay soils often suffer from ponding. These clay soils would benefit from having more large pores. 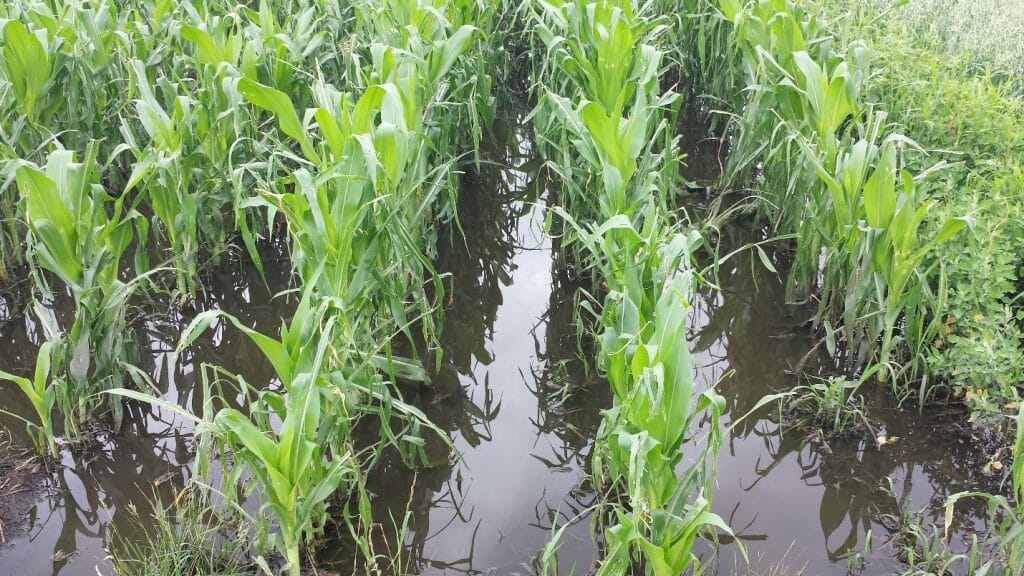 This is an important point. It doesn’t mean cover crops can’t help your soil hold water. For some folks with sandier soils, they might help build those small pores their soil might be lacking. For folks with soils that already have small pores, the role of cover crops might be a bit different. Cover crops reduce erosion, no question, so the cover crop’s service might be more in keeping the wonderfully structured soil you’ve been building from going into the river. Additionally, many studies have found building soil structure takes a lot of time. Reducing tillage is often the first step, but many producers report cover cropping helps with the transition to reduced tillage. Based on the ‘large pore, small pore’ framework, it is possible cover crop roots and their associated encouragement of biological activity during the traditionally fallow season are helping to create larger pores faster than would happen switching to no-till without cover-cropping.

Based on this framework, the first thing you should ask me is, ‘What was the soil texture of the fields you visited?’ I’m glad you asked. 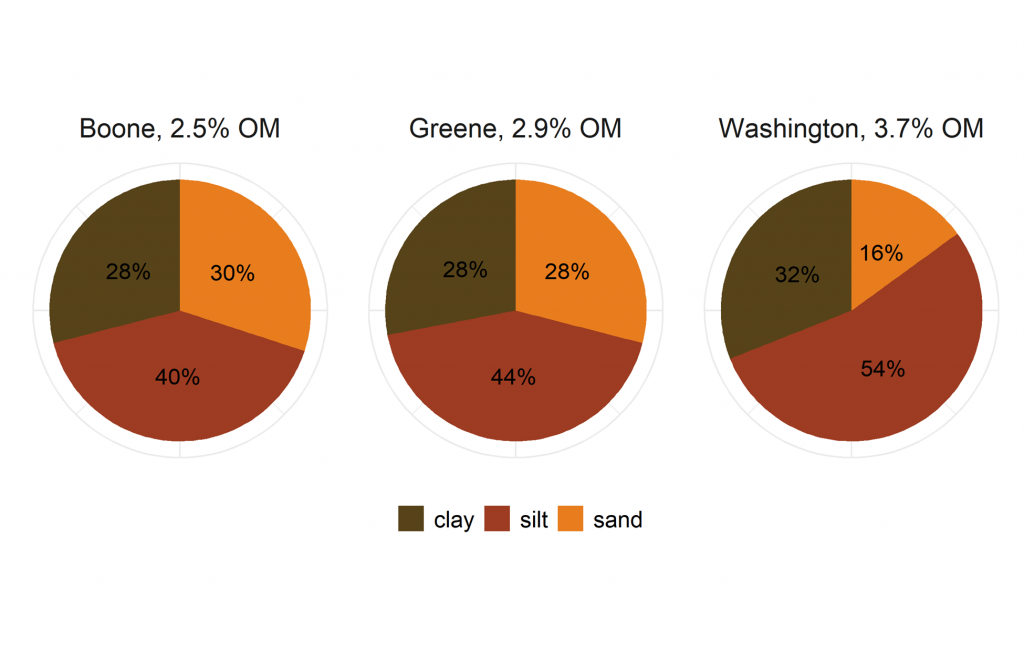 None of these sites have sandy soils, and they all have pretty high organic matter contents. When I looked at the amount of water versus pressure, there was not a significant difference in any of the experiments. 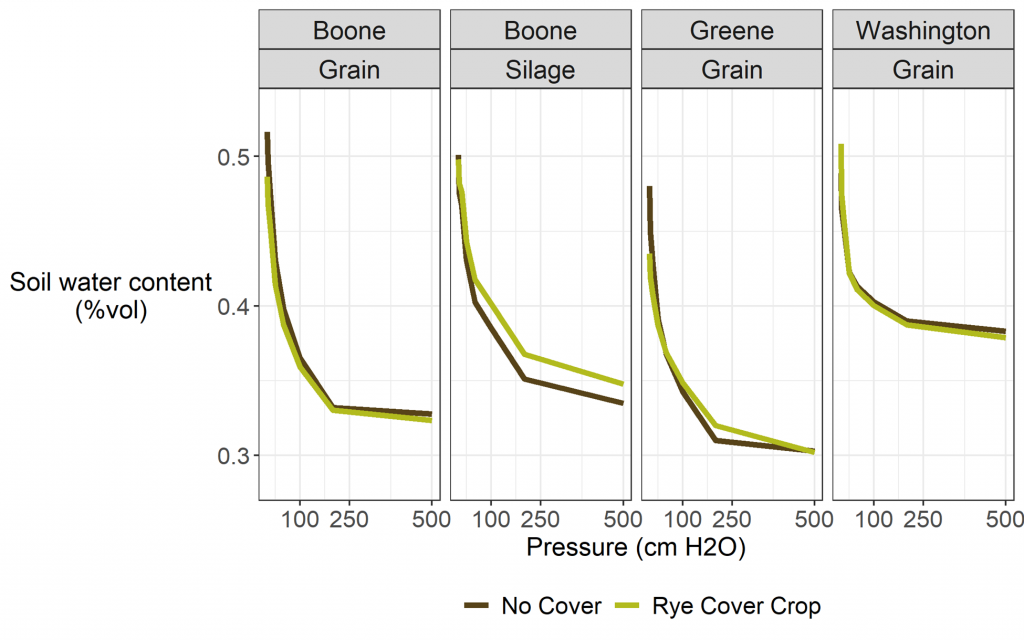 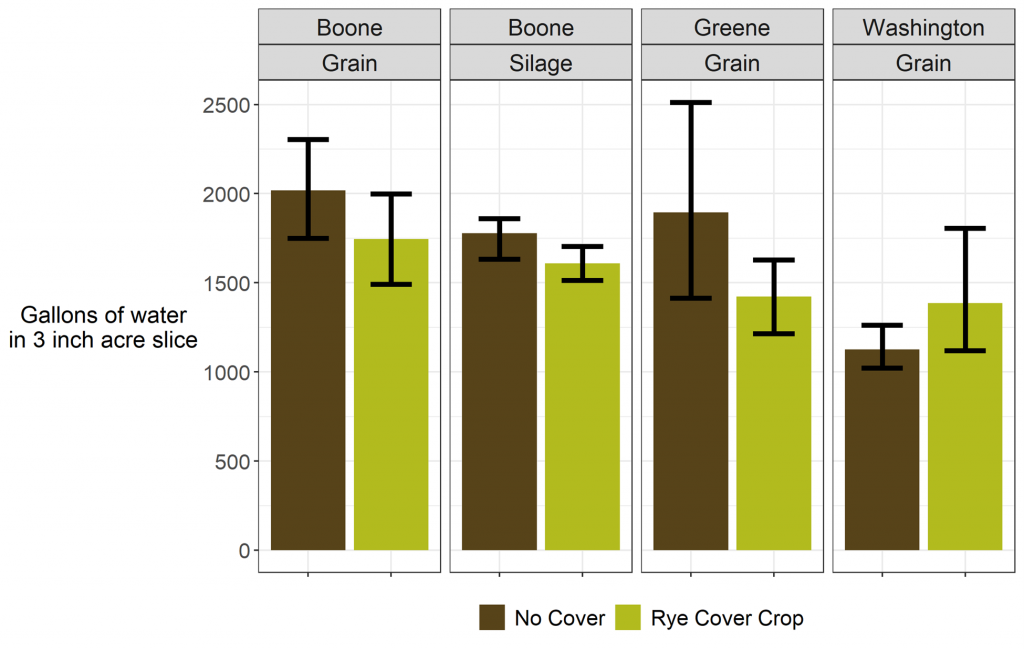 But, based on the soil texture, this isn’t terribly surprising, right?

There is another way of looking at this data. I think these results might show that after 10 years, the strips without cover crops have ‘caught up’ with the cover cropped strips. We don’t have baseline measurements, nor measurements taken a few years into the experiments, so this is all conjecture. However, another PhD student at Iowa State University, Britt Moore, has seen this ‘catch-up’ dynamic at another USDA site, albeit at shallower soil depths than I measured.

In summary, while I didn’t find any evidence cover cropping increased the soil’s capacity to hold water in these four experiments, depending on your soil texture, that might not be the point of cover crops in your operation. At these sites, the cover crops might be working to get as much water into their soil as possible, where it can hang on to it for later.

I hope this helps you define your cover crop goals and gives you a framework for thinking about how ‘it depends’ applies to you. Happy cover cropping!

Gina Nichols is a PhD student at Iowa State University and a proud member of PFI. This research project was possible thanks to financial support from SARE Grant #2017-38640-26916. If you have questions about this research, email Gina at vnichols@istate.edu.

Cover Crop and Reduced Tillage Benefits in the Field and Beyond