Ginger (Zingiber officinale) is a tropical plant whose roots are often harvested for consumption. In addition to its use as a spice for Asian dishes, ginger root has many medicinal uses such as relieving nausea, reducing inflammation, and boosting immune system function.[1] Although it is available in grocery stores and co-ops, ginger is not commonly grown in Iowa. For ginger to be grown outdoors, it needs to be in the USDA Hardiness Scale’s Zone 7 or higher, meaning the temperature doesn’t normally drop below 0°F.[2] Iowa is located mainly in Zone 5 with sections in Zone 4b, where temperatures can be as low as -25°F.[2] Ginger is also tricky to grow in general: the plant takes months to form edible roots, needs to be brought in during the winter in colder climes, has specific shade and soil requirements, and cannot dry out while actively growing.[1] 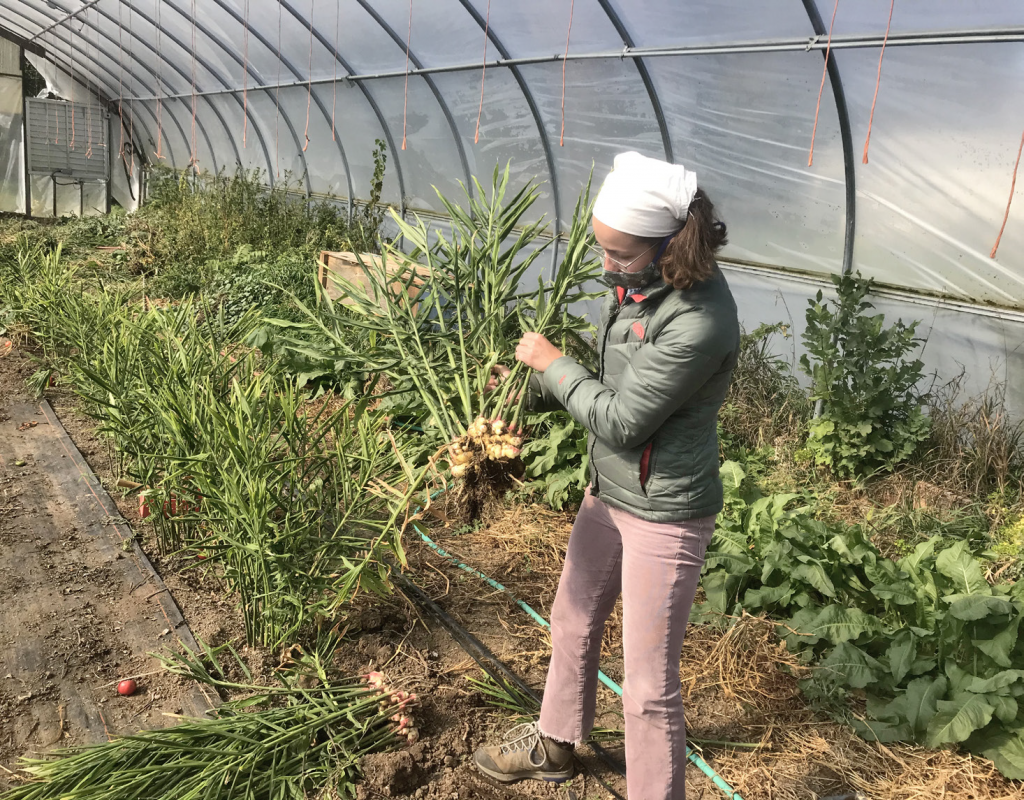 Little is known about growing ginger in the Midwest, so cooperators were curious about growing it in Iowa. They were especially curious about ideal growing conditions and what variety produces the best ginger. Caughey was motivated to improve her growing practices, having only grown one variety of ginger in one cover condition: “Is growing out in the field covered just as good… [and] can I grow out ginger from the Coop and it also produces the same yield?” Caughey asked. Schintler was extremely motivated to improve her own practices also. “Our greenhouse space is very limited, so if we can grow ginger plants that produce successfully in the field, that will open up greenhouse space for us to grow other products that cannot be field grown.” Schintler said.

Yagla began pre-sprouting ginger in mid-March 2020. Pre-sprouting consisted of holding seed pieces at 75-80°F in a damp medium, such as peat, coir, or soil mix. Yagla and Quee moved seed pieces to 1020 trays (20 seed pieces/tray) for sprouting in March in warm, bright conditions. In late May or early June, once soil temperatures maintained 70°F, all cooperators prepared beds and planted or transplanted ginger seeds in rows. Harvest and measurement of ginger rhizomes occurred in late September through mid-October. Ginger management details for each farm are provided in Table 1.

All cooperators used a paired trial of two varieties and two environments. The variety treatments were Organic Peruvian Yellow and an organic ginger of Variety Not Specified (VNS) from the New Pioneer Co-op Grocery store in Iowa City. The two environmental treatments were no cover versus cover, such as a high tunnel or row cover. The treatments were randomized and had four replications each (Figure A1).

At harvest, cooperators measured ginger yield in pounds per plot. They also performed two scaled quality assessments: firmness (too soft, some give, firm) and rhizome color (no yellow, some pink; pale yellow, lots of pink; rich yellow, some pink). 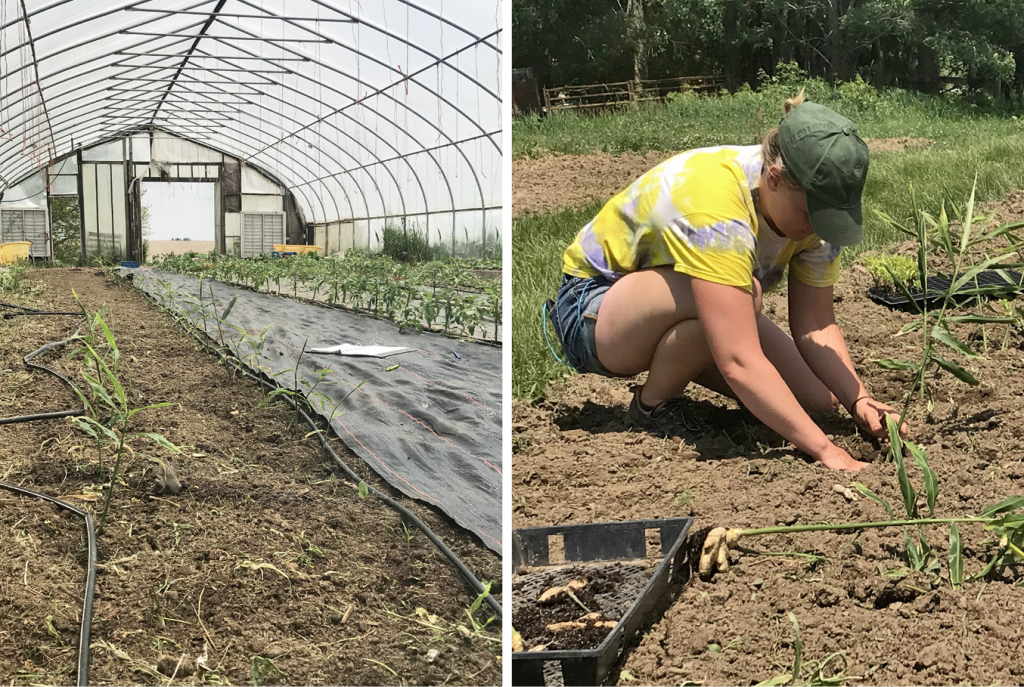 A comparison of the two environmental treatments. On the left, The high tunnel setup at Quee’s farm. On the right, harvesting ginger grown outside at Quee’s farm.

Ginger yields by variety and cover

Generally, there were no differences between the two varieties when either covered or uncovered (Figure 1). The exception was at Yagla’s: VNS was statistically greater than Peruvian Yellow when uncovered. For Quee and Caughey, no significant difference in yield was observed between row cover or high tunnel cover and field-grown ginger. Interestingly, the cover treatments gave mixed results among the farms. Quee, who used a high tunnel, will in the future only grow ginger indoors due to low yield in the field. Schintler and Yagla, on the other hand, had better luck in the field than under the row cover or cat tunnel. 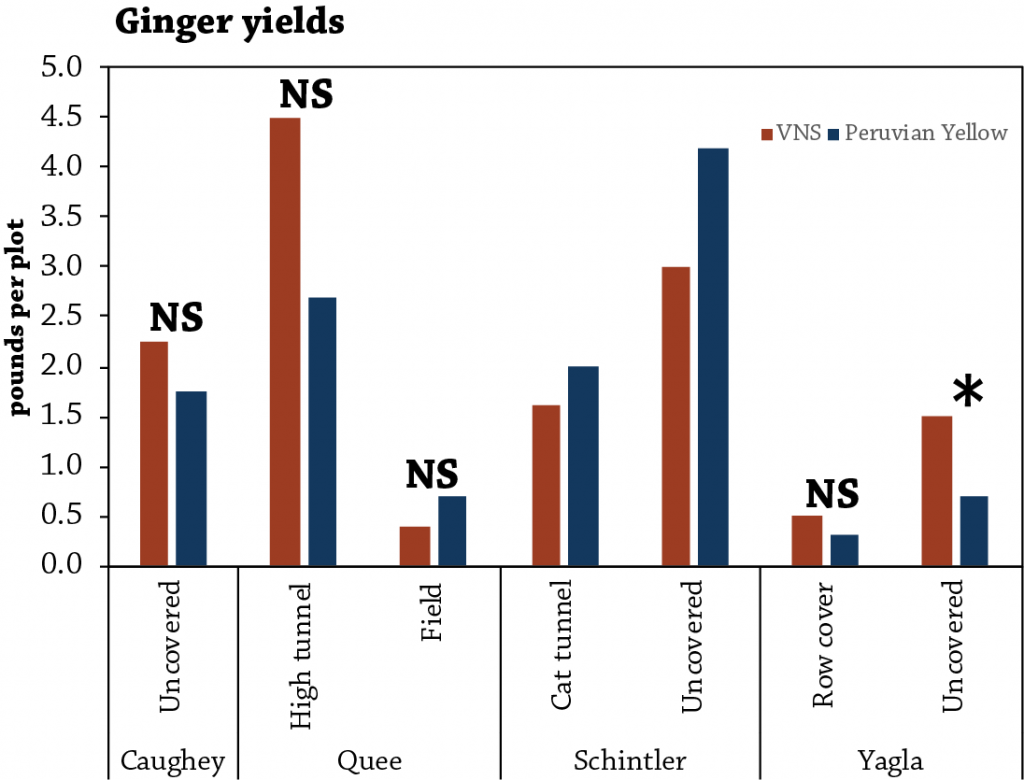 Caughey, Quee, and Yagla measured ginger firmness. The ginger rhizomes were generally very firm across variety and cover treatments (Table 2). Having firm rhizomes is a requirement for a mature ginger plant, which shows the ginger was able to adequately grow in as little as five months.

Quee and Yagla measured rhizome color at the time of harvest. Yagla’s rhizomes were mostly pale yellow with lots of pink, except for the VNS in the uncovered plot. Quee had a marked difference in color between the cover treatments, with the uncovered rhizomes having a richer yellow than the covered (high tunnel) ones (Table 3). Rhizome color is an indicator of maturity, and according to Yagla, darker yellow rhizomes indicate a more mature ginger with extra spice. Color is also a common way to indicate disease pressure or to tell the difference between ginger varieties, although in this trial, the differences between varieties was not pronounced.

Cooperators for this trial set out to learn what varieties and covers worked best for growing ginger, a tropical plant, in a Midwestern climate. Although there was mostly no difference between the two tested varieties of ginger, there appeared to be a difference in yield from covers, so cooperators learned which growing tactics worked best for their individual farms. Cait Caughey found that her soil was too compact for the ginger. “I would likely have better results growing the ginger in raised beds and will do so this next season.” Caughey said.

Mark Quee learned how to strategize his ginger placement: indoors and away from other plantings. “I’ll probably try sourcing seed from both sources again, just to get more data” Quee said. Molly Schintler, on the other hand, wants to keep growing ginger outside if she can get a comparable yield from it.
Ginger is a unique crop for an Iowa farm. Caughey and Quee are especially interested in growing ginger again, with enough knowledge for it to turn out better next year. “I enjoyed planting based on treatments + learning the process of a trial that could beget replicable results. I would like to try again and I think learning the method was absolutely worthwhile,” Caughey said.

FIGURE A1. Cooperators experimental design consisted of four replications of the two varieties, in two environments (8 plots in both environments). This design allows for statistical analysis of the results.

FIGURE A2. Mean monthly temperature and rainfall for May through October and the long-term averages at the nearest weather stations to each farm. A) Caughey B) Quee & Yagla C) Schintler.[3]