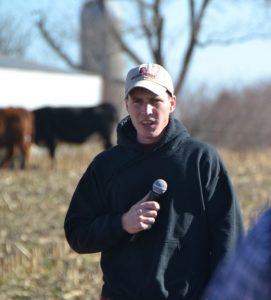 AMES, Iowa — A three-year on-farm research project by Practical Farmers of Iowa is putting a price tag on the forage produced by cover crops. Two years of data from an on-going study show that the practice of grazing cover crops, combined with cost-share funding, provides positive returns within the same year cover crops are planted.

This finding is significant because some of the benefits of cover crops may take a few years to manifest – and the costs can be hard for farmers to justify in the short-term, when profit margins are shrinking.

The PFI data, however, shows that with proper management, grazing cover crops is a prime means by which farmers can realize sizeable profits within the first year.

Three cow-calf producers in the North Raccoon Watershed – Wesley Degner, of Lytton; Bill Frederick, of Jefferson; and Mark Schleisman, of Lake City – are participating in the project, which started in 2015 and will run through May 2018. The project is supported by the Iowa Department of Agriculture and Land Stewardship.

Key findings from the research include:

The full report – “Economic Impact of Grazing Cover Crops in Cow-Calf Operations” – includes detailed economic analyses from each farm and is available at practicalfarmers.org/farmer-knowledge/research-reports.

For the study, the participating farmers seeded cover crops of their choosing, intending to graze the forage produced. Cattle grazed on cover crops in the fall, and some continued to graze into the winter and spring.

While water, minerals and some supplemental feed were all provided when needed, cover crops and crop residue comprised the vast majority of each herd’s ration.

At the start of each cover crop grazing season, the farmers estimated how much feed their cattle would need based on animal weight and daily dry matter requirements.

This value, minus any supplemental feed provided, was considered the amount of feed farmers were able to offset by grazing cover crops. A conservative value of $80 per ton was assigned to the amount of feed saved. The price of grass hay varies, but can often cost $90 to $140 per ton.

“When cattle are out grazing covers, we don’t feed cows their normal ration, which saves us money,” says Wesley Degner.

The second component of the project was an economic analysis to determine the actual economic impact of grazing covers. The participants tracked all expenses throughout the study and entered the data into a spreadsheet developed by an economist at Iowa State University that estimates the forage value of cover crops. This tool will soon be available for free on ISU’s Ag Decision Maker website.

Across the three farms, the value of cover crop forage ranged from $28 to $61 per acre, before costs were removed. Costs included establishing and killing the cover crop, labor, fence and water.

In some cases, costs exceeded forage value – and in these cases, the cost-share dollars made up the difference.

All three farmers received cost-share assistance for their cover crop acres, either from their county Natural Resources Conservation Service or from the Iowa Department of Agriculture and Land Stewardship. Cost-share payments ranged from $11 to $41 per acre, and were included in the economic analysis.

Once factored in, the total net economic gain from feeding cover crops to cattle ranged from $355 to $40,192 per year (or $2 to $60 per acre). This variance can be attributed to the farmers’ different levels of experience with cover crops and their understanding of issues related to cover crop planting and grazing management.

Wesley, for instance, had never planted or grazed cover crops before this project. He says the experience gave him the confidence to increase his cover crop acres from 85 to 293 acres. “I’m still learning,” he says, “but I think grazing both in the fall and spring will help me remain profitable.”

Cost-share funding can be especially helpful for farmers, like Wesley, who are new to certain farming practices. The funds let farmers try unfamiliar practices and hone their skills while providing a financial buffer against mistakes.

Mark Schleisman, by contrast, has over 10 years of cover crop grazing experience and has figured out ways to remain profitable regardless of cost-share dollars. “We started planting cereal rye because it was easy to calve in,” Mark says. “Now, our cover crops are grazed as a way to justify the costs.”

He adds that he is most excited about the role cover crops have played in allowing him to expand the size of his herd. “My dad ran 200 cow-calf pairs on the same acres that we now run 360 pairs on. Because we can graze cover crops, we’re producing more on the same amount of land.”

For more information on this study, or other on-farm livestock research through PFI’s Cooperators’ Program, contact PFI Livestock Coordinator Meghan Filbert at (515) 232-5661 or meghan@practicalfarmers.org. 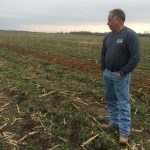 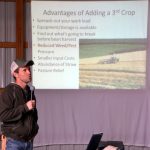 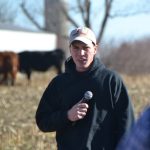