For the tenth consecutive winter season, beginning and aspiring farmers in Practical Farmers’ network assembled for a two-day retreat to network and make progress building their farm businesses. The location and dates vary each year in an effort to attract new farmers from around the state, landing this year at the Wesley Woods Retreat Center in Indianola, Iowa. 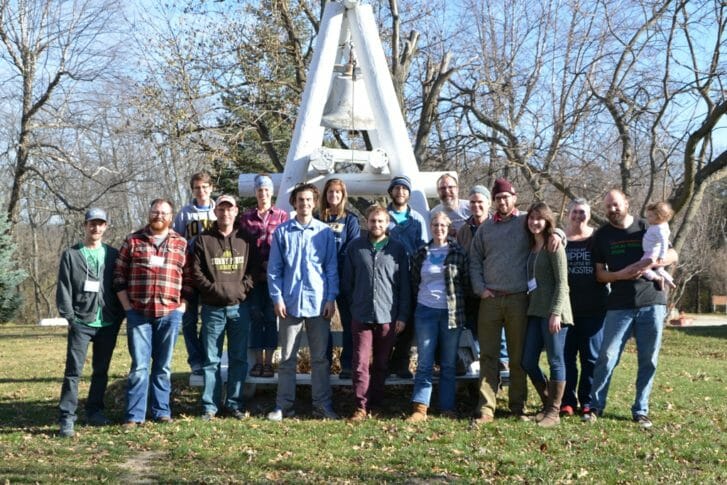 Most of the attendees at this year’s retreat.

Day one began after lunch with individual goal setting exercises. The foundation of a healthy farm—or any business—begins with goals that are guided by your values. As tedious as it may seem, it’s important to write down what kind of farm you want, what lifestyle you want to lead, what your comfort is with financial risk, and to identify your attitudes toward community, land ethics and other issues. This is especially important when working with a partner. Using these values, the farmers then outlined goals for personal, financial, production, and marketing avenues, and organized them as short-term or long-term, as well as by priority.

For the rest of the day we were joined by three “advanced beginning farmers”—those who have been farming on their own for 6-10 years. Jordan Scheibel of Middle Way Farm, Kate Edwards of Wild Woods Farm, and Wade Dooley of Glenwood Farm made up the Farm Vision Panel, where each of them described their farm and the evolution that led them to this point. Each farmer had a unique story to share, and helpful insights behind the decisions they had to make in their early years on their own.

Jordan: “I went to the beginning farmer retreat from like 2011 to 2013, and I still have my farm vision map from 2012! I really enjoyed going back and looking at this, because a lot of things are different, but actually a lot of things I can say “oh, I did that!” I grew faster than I thought I would.”

Kate: “When I quit my job I realized it took a lot of money to farm and I quickly found out, the only thing I can grow is vegetables. It was an entry for me because it was the lowest input capital costs to get into farming.”

Wade: “Farming is layers, like an onion, and some of it smells. But if you cook it right, it’s delicious!” 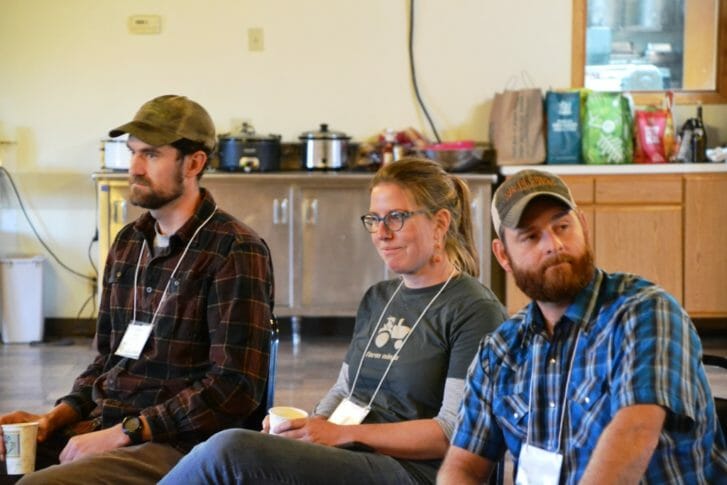 Attendees had a diversity of questions for the panel, one of the more valuable aspects of the retreat as reported in their feedback. The conversation covered CSA’s, employees and labor—including hiring processes and managing employees—finding the right scale, doing soil tests, working within farm leases and the infrastructure issues that relate to renting land, and much more.

Like all the past beginning farmer retreats, the evening time was spent sharing delicious food, which included an incredible roast purchased from Angela and Jason Johnson’s Lucky George Farm, among other things. Time spent chit-chatting and networking is always a highlight of the weekend.

Day two focused on goal setting, planning, and marketing, featuring the experience of two seasoned PFI farmers. Rick Hartmann of Small Potatoes Farm spoke to the group about how he and his wife Stacey rely on a series of plans that help guide their decision-making process. We walked through the practice of creating a 5 year plan, annual plan, seasonal plan, weekly plan, and a daily plan that all work together.

Here are a few comments from attendees after the event:

“We got a ton of value out of this retreat. Thanks so much!”

“The conference brought to my attention lots more questions and ideas to think over and develop. That’s great.”

“This [retreat] is a must for anyone serious about planning their farm future.”

“I am much more motivated to make another 5 year plan and dial in my plan for the 2018 season.”