Our fifth stop on the cover crop caravan this spring took us to Postville in northeast Iowa. We were greeted that morning with a fresh snow fall that unfortunately made it impractical to see cover crops in action, luckily our presenters had lots of photos to remind us what spring and summer look like. Don kicked off the field day by describing his cover crop practices and experiences and then we had a special presentation from Liam McVey, a local sixth grade student with a top prize science fair project on soil organic matter. NRCS Area Agronomist Neil Sass then wrapped up the day with a deeper look at the science of soil organic matter and new results from a cover crop seeding date and rate study Neil and his colleague Jacob Groth conducted last year. 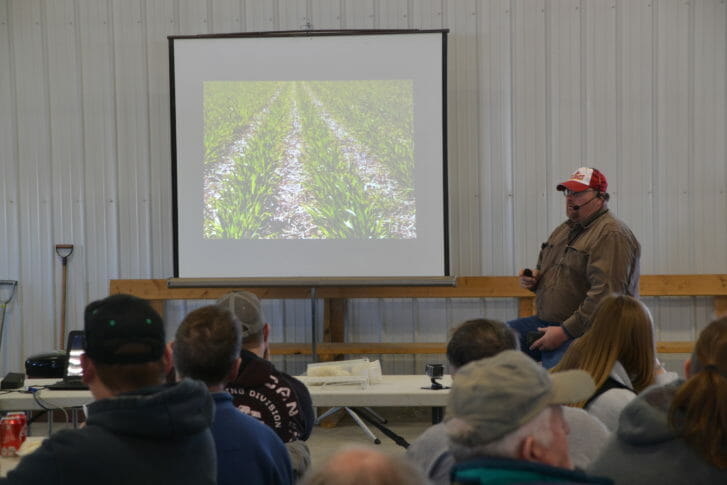 Don Elsbernd discusses cover crops at his field day in his (heated!) shop.

Don has been planting cover crops for years on his farm in Allamakee and Winneshiek counties, even though some would say that’s “too far north” to do cover crops successfully. He first got into cover crops because he was concerned about erosion on soybean ground due to lack of substantial residue. But with more experience his goals have evolved and grown to three:

Among the tricks he’s tried to accomplish these goals within his short window for cover crop growth are dormant seeding and interseeding.

Dormant seeding refers to an over-wintering cover crop that is planted late in the fall. “It’s best to seed cereal rye before Oct 15,” Don said, “but it’s hard to do up here – so we often end up planting into low soil temperatures so we don’t visibly see any growth in the fall.” But, come spring that rye greens up and grows. To plant the rye, Don uses his regular soybean planter with a special disc that he purchased from a company called SeedRight out of Ohio. They make and sell these discs for Kinze and John Deere air seeders so that you can plant rye or other small grains with your normal soybean equipment. 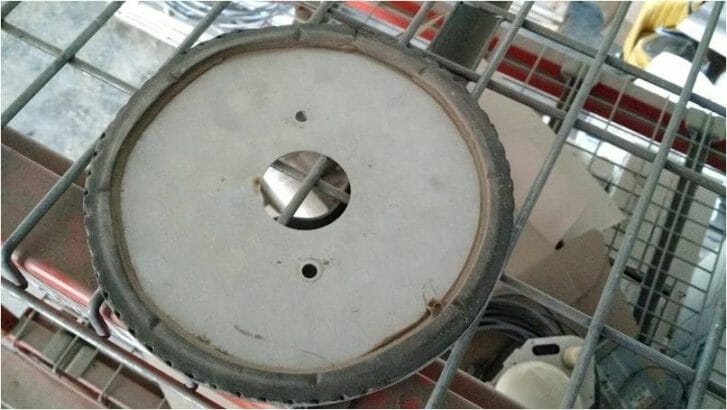 Because of the late planting date in dormant seeding, Don tries to let his rye grow as long as possible in the spring so he gets the benefits of out of it he’s seeking. When planting corn, Don shoots for 8-10 inches of rye and then he strip tills and sprays to terminate the rye only 1-2 days before corn planting. Then Don applies nitrogen with his planter. He says, “There’s not a lot to the allelopathy theory about rye and corn – I believe it’s more about the Carbon to Nitrogen ratio and that’s why early fertilizer is important.”

For soybeans, Don lets the rye grow as long as possible with crop insurance rules. When he plants the beans into living rye he uses a coulter, but no row cleaners. A keen audience member piped up with a question – “Do you have trouble with getting the rye residue to break down in time so you can plant cover crops again that fall?” When he first started cover crops, Don said, “Yes, it took a long time to break down. But after three years of cover crops, we’ve got enough going on in the soil it breaks down much more quickly. Now sometimes in July I wish I had more residue!” Last year he had beans in the high 70 bushels to the acre and 2016 was his best year ever. “We’re able to grow better beans by terminating rye late than without cover crops,” Don said.

How does he find the economic benefit of this system? In addition to those impressive soybean yields, it’s through weed control. On both corn and bean ground, Don scouts and determines if a second pass of herbicides is necessary after planting. “It depends on the weed pressure that year,” Don said, “some years 20% of the fields get a second pass and some years 90% of the fields do.” He’s seen particularly good control of waterhemp in his fields using rye in his weed control program. 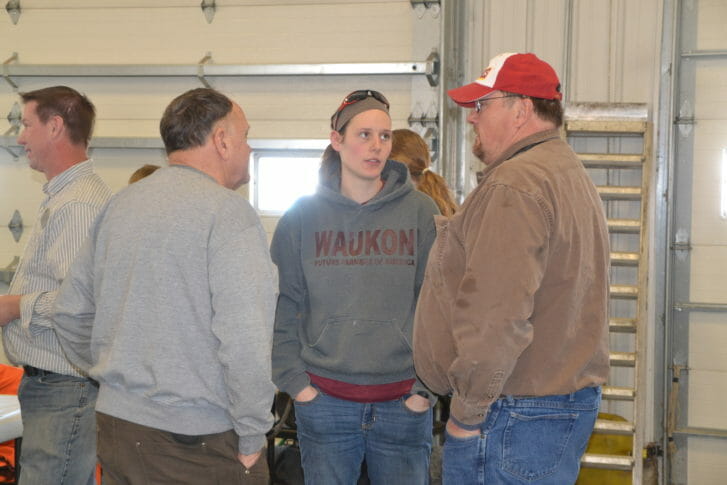 Don (right, in cap) answers questions after his presentation.

Don began experimenting with interseeding 3 years ago – and the first two years it flopped. He got in the field too late into V4 in corn because his Hagie High Boy was too busy spraying until too late and the cover crop failed to establish before canopy closure. Recognizing this equipment limitation last year, he purchased a rotary hoe attachment for his planter bar and finally had successful establishment by planting ryegrass in early V4 with the new equipment. “Ryegrass is a different animal,” Don said. “It’s hard to terminate because you have to wait until it’s growing in the spring and it often winterkills, but you get more fall growth as a trade off.” In order to make sure he doesn’t have herbicide carry over that prevents his cover crop establishment at interseeding, Don using a very short lived residual in his burndown pass and then skips the second application altogether or puts on Status (another short lived product) one day after planting. He did have a bad experience one year with Harness, which contains atrazine, preventing his interseeding from establishing. 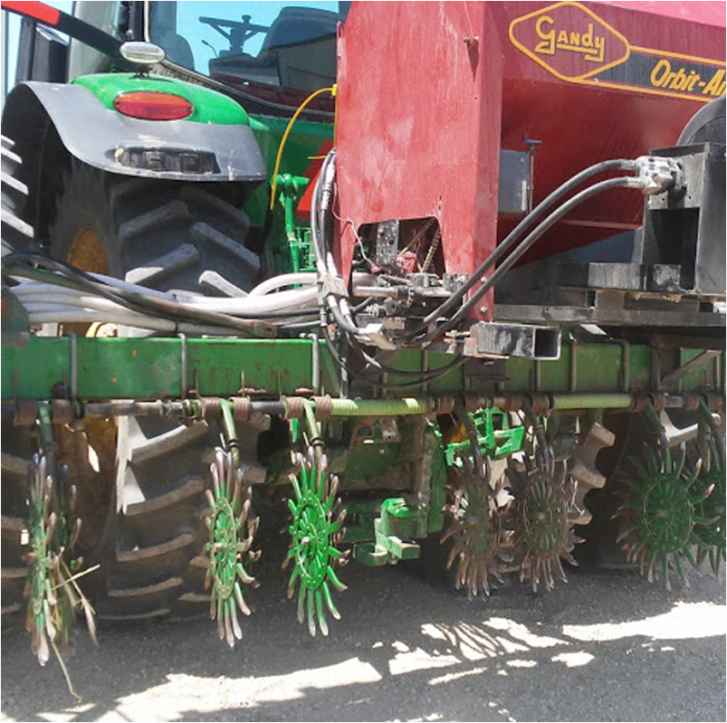 Don’s rotary hoe attachment that allowed him to successfully seed cover crops at V4 corn this past summer.

Liam McVey from a local area school then stepped up to the microphone to discuss his first place science fair project. In his experiment, he planted grass and beans into four types of soil – sand, eroded soil, topsoil and potting soil. After three weeks of regular watering, he stopped watering the plants to simulate a drought. The sand and eroded soil pots wilted almost immediately while the good top soil and potting soil plants persisted, looking healthy, for much longer. This demonstrates how organic matter in soils improves water holding capacity that makes farms more resilient. “Organic matter is really important,” Liam said. “It can almost decide the whole way a plant grows.” He recommends checking the color of your soil as a good, quick indicator of organic matter. Darker soils have higher organic matter. 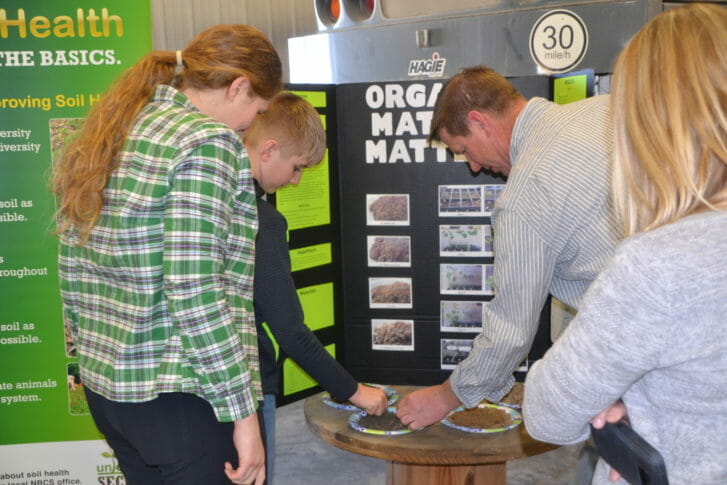 Our final presenter, Neil Sass, then discussed results of his seeding date and rate study with colleague Jacob Groth. In their trial they seeded rye on October 11 and Oct 31 at both 1 bushel/acre (full rate) and ½ bushel/acre (half rate). What the discovered was that before May 1st seeding date really caused a big difference in shoots per foot, with the earlier seeding producing more shoots per foot, but given enough time, the late seedings will catch up with their tillering.  Neil explained, “higher seeding rates do lead to higher populations initially, but as the plant tillers the populations equalize over time.” So, in systems where cover crops are terminated after Mid-May the seeding date is not so important – such as delayed cover crop termination after soybean planting. But in early terminated systems, such as before corn planting in early April, the seeding date has the ability to significantly impact cover crop biomass in that year. In Neil’s words: “May makes organic matter.” 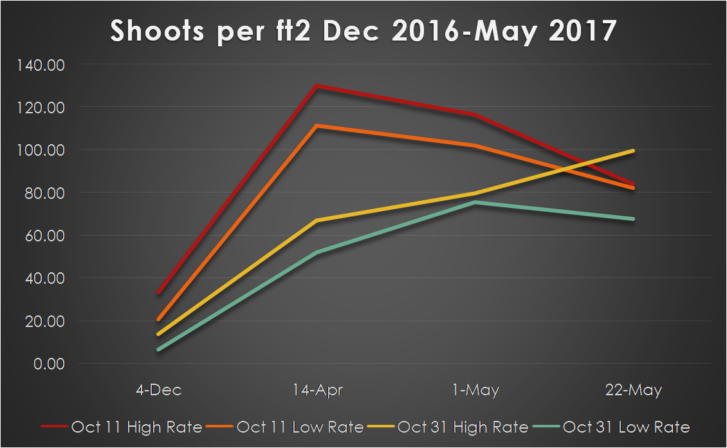 Shoots or tillers per square foot as the year progresses demonstrates how plant populations converge with enough growth time regardless of seeding rate or planting date.

Overall, the half seeding rate performed just slightly less than the full seeding rate in its planting date group – indicating that using a half rate may be a cost-effective strategy to managing cover crops for maximum return on investment. The higher seeding rate may only be recommended in years when cover crop planting is late and termination is early the next spring. However, this is just one year of data so the ability to make generalizations is limited, Neil and Jacob planted cover crops in this trial design again this past fall (2017) so that they will have more data to analyze and extrapolate from the very different weather conditions we are already experiencing this spring. 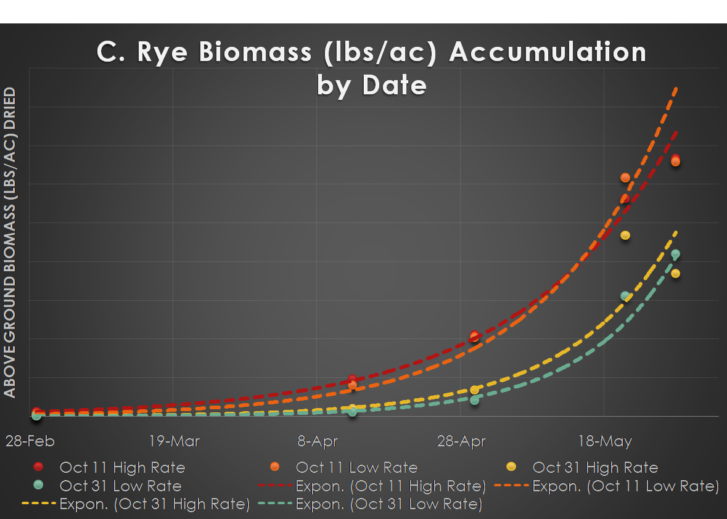 This graph from Neil’s slides shows the cereal rye growth curve for all four treatments in his cover crop seeding rates and dates study. 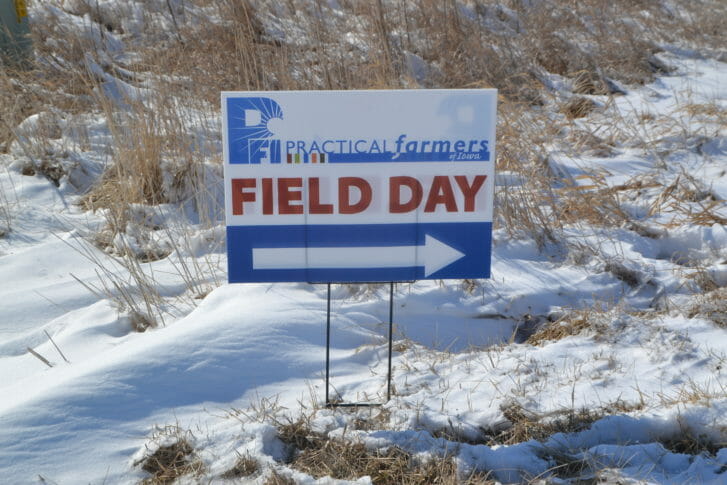