We kicked off our  2018 Cover Crop Caravan field day series on March 27 with Mike Jackson in Oskaloosa. The event started indoors at the Mahasaka County Extension Office in town before heading to the field to view some cover crops that were green and waiting for warmer temperatures to spur some growth. Mike shared with the group the when, what, how and why for cover crops on his family’s farm. 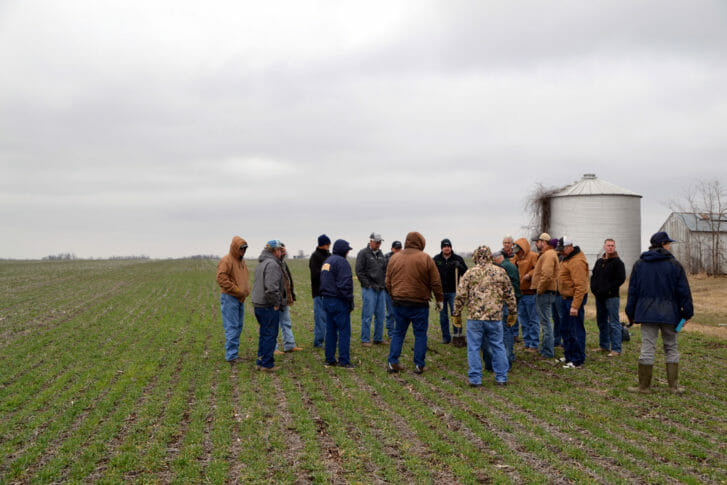 When do you order cover crop seed?

Mike shared with the group that he starts considering pricing and ordering cover crop seed in mid- to late July. He said this is when seed houses start to set their prices and you could score an early discount on seed if you act this early. It’s also important to watch the weather conditions in some of the cover crop seed producing regions of the country, Mike said. A drought in the Dakotas last year caused triticale prices to jump by $3-8 per bushel from September to November last year.

What cover crop species do you use?

By far the most widely-used cover crop species is cereal rye. This is because cereal rye can germinate at low soil temperatures (~34 degrees Fahrenheit), overwinters well in Iowa and can produce a substantial amount of growth the following spring–this growth is important for erosion protection, sequestering nutrients, controlling weeds, improving water infiltration and building organic matter. Mike said that he will also sometimes include oats with the cereal rye as the oats can produce more aboveground growth in the fall than the cereal rye. You can learn more about cover crop species success in Iowa from Practical Farmers’ cover crop variety trials.

How do you seed cover crops?

Mike’s preferred method for seeding cover crops is to drill them shortly after harvesting corn and soybeans in the fall. Some call this “chasing the combine” with the drill. As for seeding rates, he considers a few factors. 1) If the long-term forecast in the fall is for warmer-than-usual temperatures, Mike will lower his seeding rate a bit to 35 lb/ac. Farmers are generally seeding 50-60 lb/ac of cereal rye. 2) Knowing the seed size goes a long way to getting the cover crop stand that you desire. “The smaller the seed, I will back my rates off,” Mike said. This is because there are more seeds per pound as seed size declines. Fifty pounds of one cereal variety will contain a different amount of seeds than another variety. Check out this blog post about determining seeding rates based on cereal rye variety seed sizes. 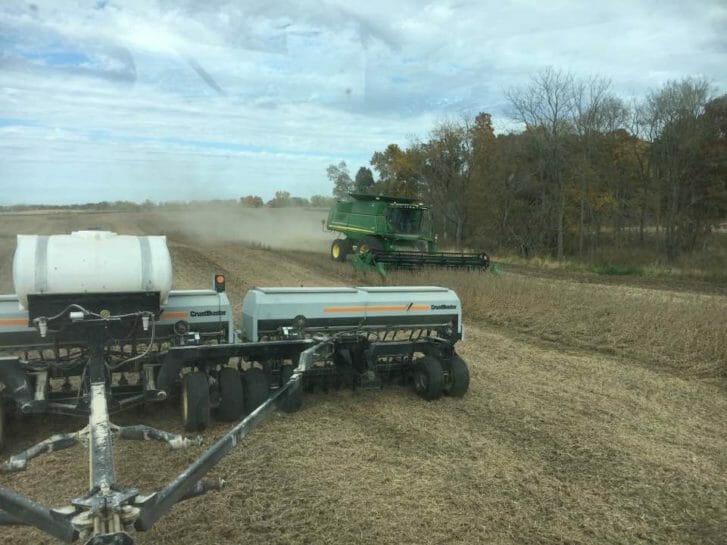 “Chasing the combine” with a drill seeding cover crops at the time of soybean harvest in the fall. Photo credit: Mike Jackson.

How do you plant corn or soybeans after a cover crop?

When going to corn, Mike will terminate the cover crop 6-10 days prior to planting the corn. It’s important the the cover crop is actively growing and temperatures are suitable for chemical termination with herbicide (glyphosate). “You know the cover crop is growing and can be killed if you’ve already mowed your lawn once,” Mike said. A proper nitrogen program is also key to success when planting corn following a cover crop. Mike shared that he will typically either apply 100 lb N/ac as hog manure in the fall or about that much N as UAN in the spring pre-plant. He then side-dresses more N as dry urea in late May or early June. Cover crop termination date and N fertilizer strategy have been found to be extremely important issues to consider when following a cover crop with corn. 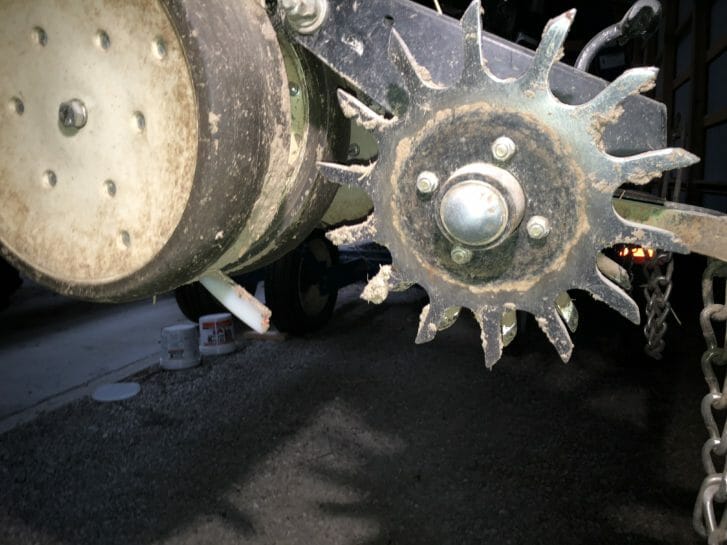 Mike uses spiked closing wheels on the back of each planter unit when seeding corn following a cover crop. Photo credit: Mike Jackson.

When going to soybeans, Mike will terminate the cover crop closer to the time of planting (within 1-3 days) when the cover crop is about knee-high. As prior Practical Farmers research has shown, this technique does not harm soybean yields and can provide improved weed control. 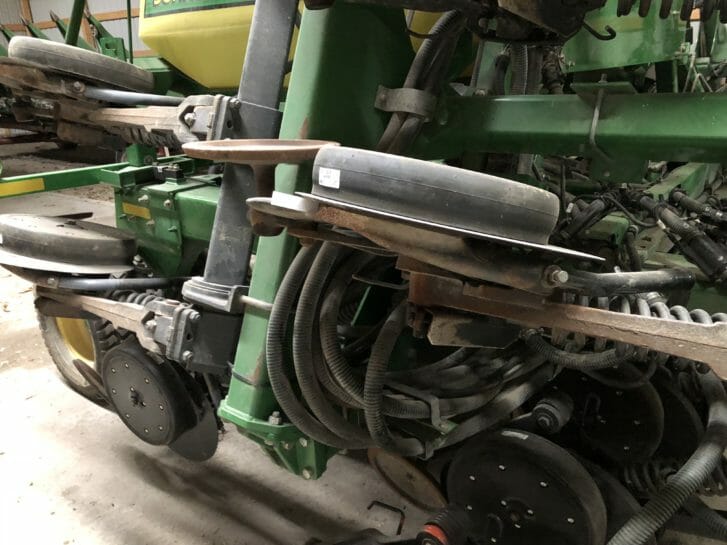 When drilling soybeans following a cover crop, Mike ensures that the disk opener is sharp enough to cut through all the cover crop residue. Photo credit: Mike Jackson.

Checking your seeding depth is very important when following cover crops, Mike said. “It’s hard to plant too deep in heavy cover.” That’s because you’re not just planting into soil but also plant matter on top of the soil. Other farmers have shared that they set their planter or drill a little deeper when following a cover crop to account for the extra material they are seeding into. Just as important is closing the seed trench after the seed is placed in the ground. Mike uses spiked closing wheels on the back of each planter unit to accomplish this.

Mike is the sixth generation of his family to farm in Mahaska County. “My father showed and taught me to take care of the land not for you but for the next generations,” he said. It’s all about the ability of cover crops to improve the soil for Mike: “Cover crops can build carbon and organic materials which will increase the soil’s holding power of fertility which can translate to greater yields down the road.” 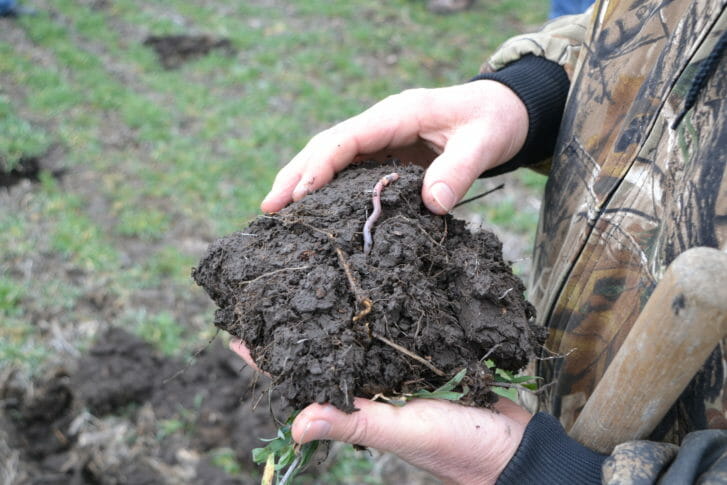 Mike’s father, Mark Jackson, shows some of the below-ground benefits from cover crops: improved soil structure and habitat for earthworms.

Jason Steele, NRCS area resource soil scientist for southeast Iowa, was on hand to explain and demonstrate the benefits to the soil from cover crops and reduced tillage. 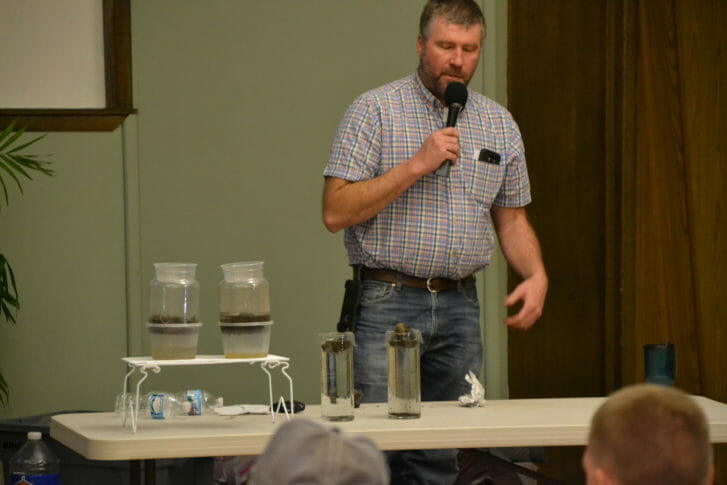 Jason Steele performed the tabletop rainfall infiltration and soil slake test demonstrations. At left in both demos is a soil from a cover crop+no-till field and at right is a soil from a field with no cover and conventional tillage. The cover crops help water infiltrate and hold soil aggregates together. 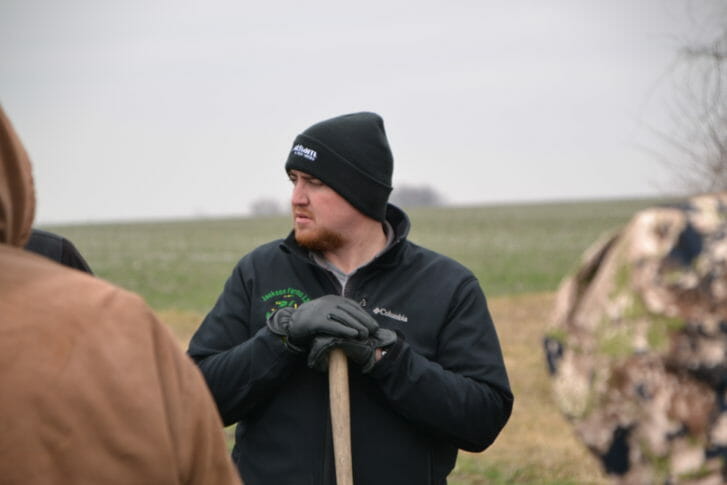 Mike Jackson hosted the field day in Oskaloosa on March 27, 2018.