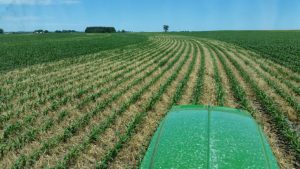 AMES, Iowa — As the date for corn planting approaches, farmers who planted cover crops last fall need to prepare to terminate that growth and apply the right amount of nitrogen at corn planting to ensure the best corn yields.

Research by Practical Farmers of Iowa has found that killing the cover crop two to three weeks before corn planting – the common timeframe on most Iowa farms – combined with an effective fertilizer strategy can maintain corn yields while saving farmers money.

Stefan Gailans, research and field crops director for Practical Farmers, says there’s a misconception among new or inexperienced cover crop farmers that extra nitrogen beyond their typical corn fertilization rates must be applied to corn following a cover crop – a belief that leads these farmers to spend money needlessly. In reality, it’s not rate that matters, he says, but timing.

“Generally, farmers do not need to apply any more nitrogen to their corn than if they did not use a cover crop,” Stefan says.

“There’s still a timing aspect, but the most success we are finding is when farmers apply some nitrogen at the time of corn planting, and then more in June. The total amount applied does not need to exceed their usual rate of nitrogen. This strategy is what’s important, not the rate.”

The research – “N Fertilizer Strategies for Corn Following Cover Crop” – was conducted during the 2017 growing season by Practical Farmers of Iowa with experienced cover crop farmers Dick Sloan, of Rowley, and Tim Sieren, of Keota. The report is available online at practicalfarmers.org.

The project was supported by the Iowa Department of Agriculture and Land Stewardship, Division of Soil Conservation; and the Natural Resources Conservation Service.

The aim of the study was twofold: to compare the effect of a standard versus delayed cover crop termination date on corn yields; and to identify possible nitrogen fertilizer strategies for successfully growing corn following a delayed termination date.

While most farmers kill their cover crop two to three weeks before planting corn to ensure the best corn yields, they also sacrifice some of the cover crop’s benefits, such as its ability to protect soil from erosion and absorb excess soil moisture before planting (which, in turn, can let farmers access their fields sooner in the spring).

For some farmers, these – and other – cover crop benefits are compelling reasons to look for ways to extend the number of days cover crops are growing in the spring.

“I want to achieve maximum growth and benefits [from my cover crop] without limiting corn yield,” says Dick Sloan, about why he chose to conduct the research. “I also hope others will gain confidence to add cover crops to their farm systems if we share practical management tips and lessons.”

For Tim Sieren, participating in the project was a way to experiment with getting the most biomass from his cover crop while also finding out which nitrogen sources and application methods are most profitable.

“I want to learn more about fine-tuning nitrogen applications to corn following rye, and about terminating rye to get the maximum biomass ahead of corn planting.”

Tim, meanwhile, planted cereal rye exclusively in a field previously sown to soybeans, and terminated his cover crop 19 days before planting corn in the standard treatment and one day before in the delayed treatment. For each termination date, Tim tested two different nitrogen fertilizer strategies.

Both farmers adhered to field research best practices, including replicating and randomizing the setup of the research plots.

Researchers found that waiting to kill the cover crop was a boon for biomass production, but resulted in lower corn yields in virtually all cases regardless of nitrogen rate or strategy.

The exception came where Dick followed corn with corn and applied fall hog manure in addition to applying nitrogen at corn planting and side-dress.

In this instance, Dick experienced no yield drag from the delayed termination – but Stefan points out that this particular treatment lacked cereal rye, which tends to be a more aggressive cover crop than other species.

For more details on this study, or other on-farm field crops research through PFI’s Cooperators’ Program, contact Stefan Gailans at (515) 232-5661 or stefan@practicalfarmers.org. 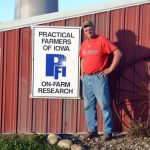 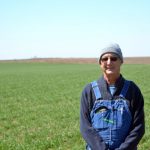 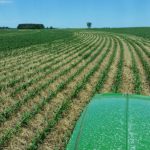