For more than 30 years now, Practical Farmers has remained focused on helping farmers build resilient farms and communities, primarily through on-farm investigation and farmer to farmer education. As our membership has diversified since the 1980’s, we’ve continued to build our farmer-led niche to include programming for nearly all enterprises and production practices.

PFI’s number one value is to welcome everyone, but in order to welcome everyone and their diverse viewpoints, the board of directors has been careful to get involved in agricultural policy. Still, just as we recognize the value of our members’ knowledge for teaching other producers about their practices, there’s also value in sharing this knowledge with lawmakers. One of the most effective ways to influence policy makers is for a farmer to explain face-to-face how that issue directly affects them and other Iowans. You can read more about Practical Farmers policy work here, including farm bill issues approved by the board. 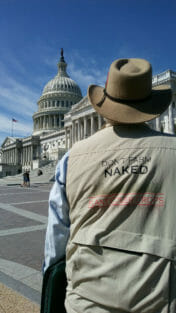 PFI’s Board President Mark Peterson recently participated in a “fly-in” to Washington D.C. organized by the National Wildlife Federation. One of the issues important to NWF is to better align crop insurance with conservation practices. Crop insurance reform is not currently a board-approved area for PFI to advocate on, but we’re always happy to assist groups such as NWF find someone like Mark who cares about the issue and wants to help on their own behalf.

I recently caught Mark on a morning too wet to plant his beans, and was able to ask about his trip to D.C.

Steve B. Carlson: What was the purpose of your trip and who organized it?

Mark Peterson: It was organized by National Wildlife Federation and the purpose was to further their agriculture-related causes. Although their organization focuses on wildlife, they know the importance of cropland and pastureland for wildlife habitat. The Donnelly bill was the big thing I pushed. They have about 7 points they wanted to push and you pick what fits best for you.

To me it shouldn’t even be a bill, my understanding is that it’s all about getting the wording changed on cover crops and termination dates (note: federal crop insurance says you have to terminate cover crops within five days of planting or risk losing your crop insurance, which can be a barrier to adopting cover crops or can minimize their effectiveness). To me, you would think that something that simple shouldn’t require legislation. That should just almost be the flick of a hand so-to-speak and it’s taken care of. But nothing’s simple.

SBC: Which representatives, or their staffers, did you meet with in D.C., and what did you talk about with them?

MP: I actually met with somebody in the office with all six of the Iowa offices. All in one day—it was a long day. Ryan (Stockwell, director of sustainable agriculture at NWF) went with. There were other folks from National Wildlife– I was the only one from Iowa.

I had appointments with five out of six of the offices. The one office I didn’t have an appointment with was (Representative) Dave Loebsack. Two years ago Melanie and I were together out in D.C. and they held a coffee meeting with Dave Loebsack and David Young and Rod Blum. When we were out there, it lasts for half hour to an hour, and Melanie and I were standing in the room with 60-70 other Iowans who were all vying for attention from the various congresspeople in a short period of time. I was standing there with the vest on (PFI’s “Don’t Farm Naked” vest), and a hand came up on my shoulder and I heard, “Don’t farm naked—why not?” And before I turned around I said “with a profile like mine that ought to be fairly obvious.” Then I turned around and out of the corner of my eye I saw the congressional pin on his lapel, and thought “oh my gosh, I have just mouthed-off to a congressman!” Turned out it was Dave Loebsack, and he said, “Cover crops, I wanna know more about this. Let’s sit down and talk.” And we sat down and we talked about cover crops for 10 or 15 minutes while his aide was tugging on his sleeve saying “we need to get going.” But he wanted to know what we can do to make cover crops successful.

Fast forward to this trip, and I didn’t have an appointment with Loebsack but I went to that coffee meeting by myself. Loebsack came in the far door and talked to a couple people, then saw me across the room and came all the way over and said “I think I know you, what’s your name?” I said “Yeah you do, it’s Mark Peterson and we talked two years ago. Maybe this will help you remember,” and I had the vest on again and I turned around, then we sat down and talked for 10 minutes about cover crops. Not only that, but he grabbed his farm aide and had him talk to me for another 10 minutes about why I was there—the Donnelly bill. All because of the Don’t Farm Naked vest!

Ryan and I then went and we met with (Representative) Young first, and it was with David Young himself as well as a member of his staff. And since David is my congressmen he definitely affords me the time, and he’s been out to our farm, and he’s very receptive to what I had to say.

We went to (Representative Rod) Blum’s office and there we met with a staffer, and talked about the same stuff. They’re very willing to listen and they’re very willing to give you a certain amount of their time. Then I believe we went to (senator) Joni Ernst’s office and met with her ag. staffer Michael, who is from my local area. Nice guy, very receptive, and grew up on a farm over here and I’ve known the family for 40 years. Pretty much the same story—tell your story about why you’re there and what you’d like to see accomplished. We talked to Michael first, and he said “Joni does want to meet with you,” so we got on the ‘special train’ and went over to the Senate. There we talked to her and visited about the same thing.

Then we went to (Chuck) Grassley’s office and met with Senator Grassley himself and his ag. staffer, and sat and talked with them. Then we finished up the day with (Representative Steve) King’s office, where we ended up talking to King’s staffer.

SBC: How did you feel the meetings went– were they receptive to your concerns and suggestions?

MP: Interesting thing was all six of them, talking to them about this Donnolley bill, all said “This makes perfect sense, it needs to change. Why can’t this be done administratively?” All they’d have to do, from the USDA administrative side of it—this is a section of federal crop insurance that says you have to terminate the cover crops within 5 days of planting or risk losing your crop insurance, and they want that stricken—is change the language. All six of them said it makes sense. There’s enough evidence at least on soybeans to prove that there’s no reason you should have to terminate your crop on any specific date. It should be left up to the individual farmer.

The Donnolly bill is the way they would have to do it on the legislative side to change it. On the administrative side they could just put different wording in there.

Unexpectedly, I got a meeting scheduled Friday afternoon to sit down with Bill Northey (recently appointed USDA Under Secretary for Farm and Foreign Agricultural Service, former Iowa Secretary of Agriculture) to ask for this change administratively. We talked about the 5-day rule, and he said “This makes perfect sense, and if nothing else we ought to get an exception for soybeans.” To be totally honest I thought I’d hear back from him by now that we got that handled, but it still hasn’t happened. That’s the disappointment, it just takes forever.

SBC: Did you leave D.C. thinking the trip was worth your time to meet face-to-face with our law makers?

MP: To me as a small-town country boy who does get involved somewhat with politics as a county supervisor, it seems to me that what I went out there for is simple enough that a stroke of a pen should take care of it, but it takes moving mountains to get anything done.

And National Wildlife in general and Ryan Stockwell says it’s worthwhile. They say it is way more effective to have a well-versed member of the congressperson’s district talking to them rather than someone from their (NWF) staff.

I feel good about getting in to visit with all the folks. And it’s nice to have fun with the legislators—whether they recognize my vest, or like Young referred to my hat as a crocodile Dundee hat—I honestly like having that kind of relationship with our legislators. When you get to that level you can crack the surface and get down to the nitty gritty and talk. If you go out and can personally explain how this has affected your farm, that’s what they want to hear. They want the personal stories.

If you’re a PFI member and are interested in meeting with your lawmakers in D.C. to talk about farm bill issues, contact me at steve@practicalfarmers.org and let me know what issues are important to you.