On June 28 about 50 folks gathered in a church just west of Bedford in southwest Iowa to learn about small grains production; malting and brewing beer; and proper grazing management in pastures and cover crops. Our agenda was packed with speakers ranging from farmers to home brewers to extension agronomists – headed up by our hosts Pam and Rick Sprague of Sprague Bees and Beef.

After dinner, we started our program off with Paul Ackley who set up our discussion for the event by tying small grain cultivation and extended rotations with soil health. “Soil is a living system, so it’s correct to talk about it as soil health,” Paul says. “I’ve spent my life farming unlearning what I learned in college courses. Chemistry is a small part of how soils work, microbes are a big part.” In order to build his soil organic matter, Paul began grazing cover crops on his farm 10 years ago and found that he was able to increase his soil organic matter only to three parts per million. So he further diversified by adding wheat and summer cover crops. Now his soil organic matter is at four parts per million and rising. 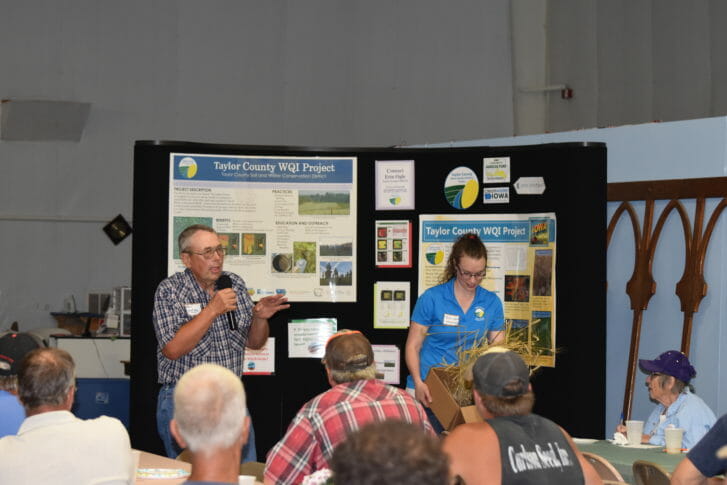 Though soil health is Paul’s primary goal, maintaining his farm profitability is also an important objective. “I grow wheat so that I can afford to grow corn,” Paul says. “My input costs are $75-120 less per acre when I’m growing corn after wheat.” Then he broke down those cost savings for us. With the small grains in the rotation, Paul doesn’t need to apply phosphate and potash to the other crops in his rotation so that decreases his expenses by $50/acre. Additionally, the varied growing seasons of wheat versus corn and soybeans help him control problem weeds and decrease his weed seed bank. So, he estimates he uses $15/acre less on herbicides than in his two-year rotation. The balance of the savings ($10-55) come from reducing his nitrogen applications to corn. “N is the big ticket item, I usually am able to cut N by about fifty pounds in my three-year rotation,” Paul says.

As far as the wheat itself, Paul favors soft wheat because it copes better with the high humidity in southern Iowa than hard wheat. For yields, he plans for 60 bushels per acre and tries for 80. And after wheat harvest, Paul burns down weeds with an herbicide pass and plants a diverse grazing mix for his cattle. Usually this mix includes forage sorghum, millet, kale, forage collards, turnips, rape, sun hemp and cow peas. He prefers to avoid the sudan grasses so there’s no danger of prussic acid poisoning.

Next up on our agenda were the home-brewers Mick Ware and John Standerford. They shared the process of malting and brewing beer and how they came up with the idea of making a Taylor Co. beverage. Unfortunately, they couldn’t find any barley grown in Taylor County so they turned to their friend and our host Rick Sprague to try out the crop. Rick liked the idea because “we’re always looking for a way to help our economic situation. Without a big highway like a 35 or 80 how can we find economic opportunity in Taylor County? This might be one way. If we start a microbrewery they could hire a few young people and create demand for alternative crops like barley and hops.”

Then we headed out to the barley field to take a look at what was going on. Aaron Saeugling of Iowa State Extension discussed some of the agronomics behind growing barley. The first thing is to understand your market. With barley you can grow two-row or six-row varieties. For malting and brewing beer, two-row barley is preferred because the larger kernel provides more extract and sugars for the brewing process. Six-row barley is favored for animal feed because of the higher grain production of packing as many kernels onto the plant as possible. 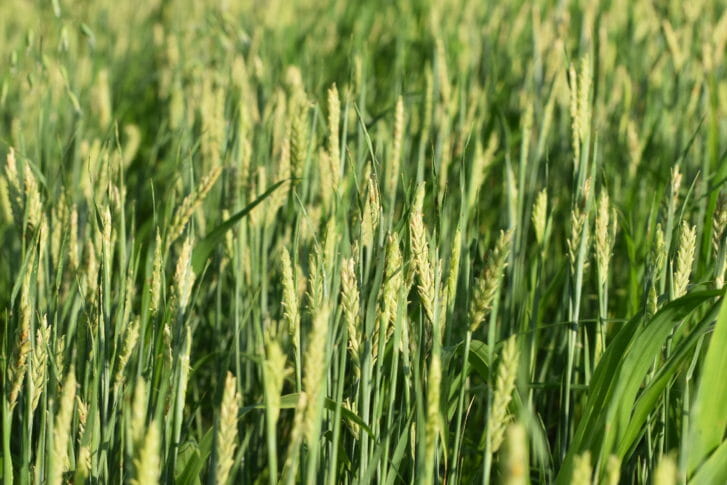 Two-row barley has a distinctive flat head because, as the name suggests, each head contains only two rows of barley. Two-row barley is favored by home brewers for its larger kernels.

“Timing is everything with winter small grain planting,” Aaron says. “You have to take the drill to the field with you when harvesting the corn or soybeans. Spring small grains too should be planted into the field as early as possible.” He also recommends a cautious nitrogen strategy – too much and the crop can grow tall and leggy and lodge, so keepingnitrogen applications to 40-60 lbs. top dressed in the spring is a best practice. 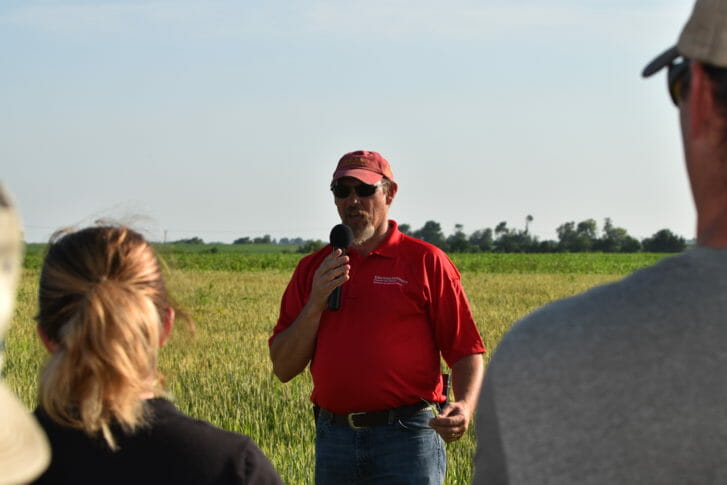 Rick’s field will be combined standing and after Mick and John take what they need for malting and brewing into their Taylor Co. Beer, Rick will feed the rest of his barley to his livestock.

After discussing barley production, we then turned our attention to the opportunities provided by growing cover crops after small grain harvest and grazing. With the longer window, more cover crop species are feasible, Aaron says. “Radish and turnips are an option with more growing degree days and combining that with a grass like sorghum sudangrass fills that summer slump for biomass and forage production. If you’re concerned about prussic acid management in the fall when the frost moves in, you can use millet instead to generate that biomass. Another drawback to sorghum sudangrass is that it has a lot of moisture so baling it is tough.

From there we loaded up on a hay wagon and trundled down the road to see a pasture scoring demonstration by Brian Peterson, grassland specialist, on a pasture that was already established. “Body conditioning scoring on an animal is a lot like pasture scoring, you’re assessing not only the volume of forage, but the quality,” Brian says. NRCS has developed a 10-factor rubric that you can use when walking your pasture to come up with an overall pasture score. It assesses plant diversity, erosion, soil compaction and plant residue left on the field after grazing. You can download the scoresheet with all 10 factors here. 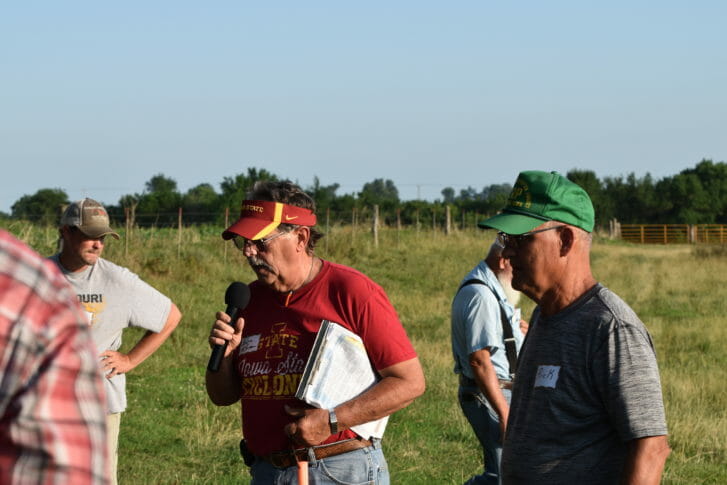 We finished the day back in the cool church where Mick and John treated us to five of their homebrewed beers, bread and cookies made from the spent grain that is left over after the brewing process is done. If you’re interested in learning more about growing barley and other small grains for brewing and distilling markets, check out this blog of a small grains shared learning call on this topic. 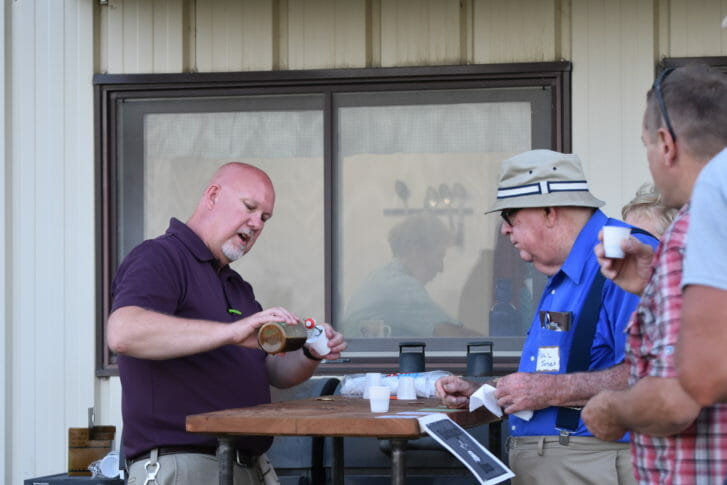 Home brewer John Standerford pours some of his and Mick Ware’s homemade beer for a field day attendee.