“I don’t think I can farm next year unless it’s on my own land, and unless I have someone to farm with me.” After spending two years fighting weeds and a crop-eliminating flood on rented ground, this was the ultimatum Hannah Breckbill offered herself in the fall of 2016. Luckily she found both. In 2017 she created a cooperative farm business with her cousin, Emily Fagan (their grandmas are sisters), and purchased ground from an LLC that had pooled their money to protect a 40-acre parcel of land in the rolling hills near Decorah. At their field day on June 21, 2018, Hannah and Emily showed attendees their farm and discussed their business structure, financial arrangements, and enterprise budgets they are using to create a sustainable farm and business. 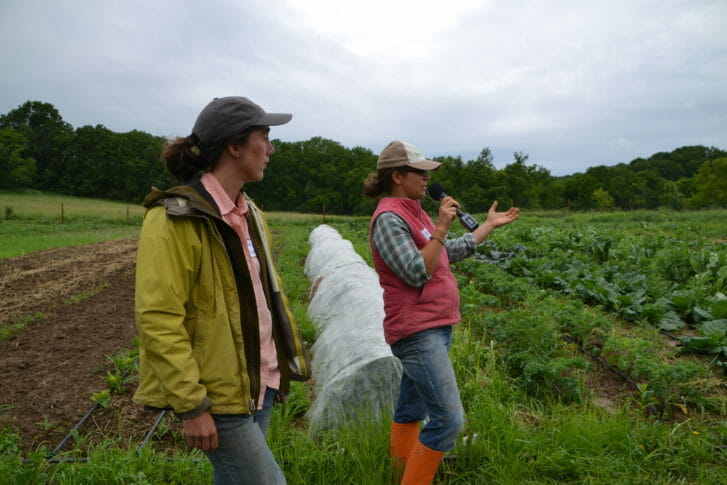 Hannah bought into the LLC, and is now an owner of some of the land and rents some of the pasture from the other owners (shares came in $5,500/acre, and the LLC did not speculate on the land – keeping rates for her consistent at $5,500/acre). Hannah obtained ownership of some of the acres outright, and she and Emily, along with support from the community, family and friends, have invested in a deer fence, well, greenhouse, moveable high tunnel, cooler, delivery van, and soon will have a new pole building to serve as a pack house and storage area. They shared the financials from their farm, including revenue, expenses (sources and uses) and profit for each year Hannah has been farming. “Even if your farm’s financial numbers are never going to be the same as mine, I think it’s useful for people to have some numbers in front of you,” said Hannah. “To start this farm, I liquidated my savings of $12,000 – there isn’t a lot of saving in entreprenuership. There are a lot of places to use money and use it well.”

The certified organic vegetables, sold through CSAs in Decorah and Rochester, wholesale accounts, and the Decorah and Cedar Rapids farmers markets, are the revenue for Humble Hands Harvest, and are Emily and Hannah’s full-time jobs for the season (they have other employment in the winter). In 2018, they each received $1,000/month from the farm, and work 5.5 days/week. In 2017, they did enterprise budgets on each of their crops. To do this, Emily followed Richard Wiswall’s template in the Organic Farmers Business Handbook. Emily walked through the process of doing this on their farm, and shared their most profitable crops: cherry tomatoes, carrots, peppers, green beans, zucchini, cucumber, garlic… “All of the crops it seems like you spend your whole life doing, and feel like you’re wasting your time – it turns out you’re not wasting your time. Which is great. If you want to be nerdy and look at my spreadsheets later, you sure can!” (Go here for other enterprise budgets done through PFI’s Cooperators’ Program). 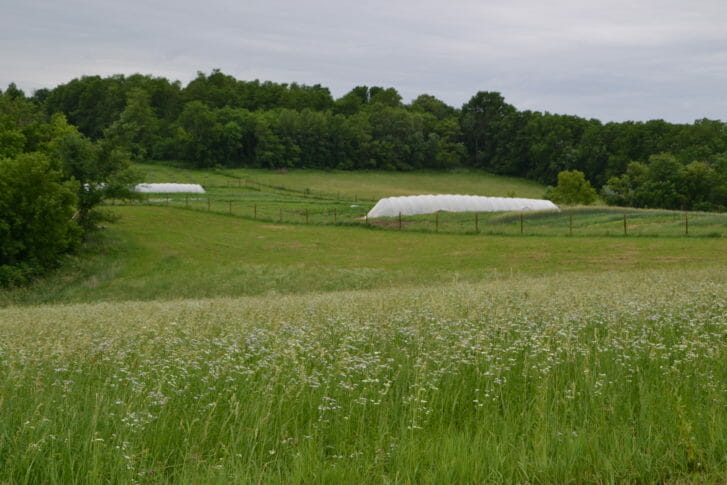 Hannah and Emily acquired field tunnels from a farmer friend, and this year are growing melons under them. The tunnels took about a day to put up, and the melons (in June) were doing well. 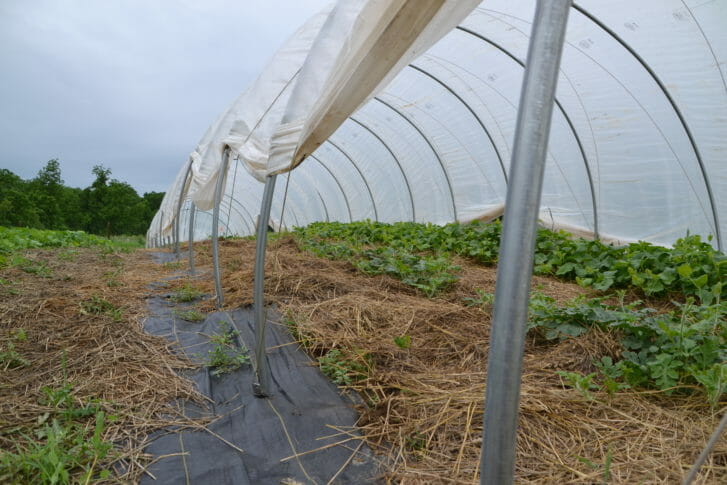 Hannah had the pasture hayed in the fall, and they decided to use the extra straw as a mulch. This is their first year doing a heavy mulch, which they plan to till under in the fall prior to seeding a cover crop. At the end of the season they’ll decide if they plan to continue the practice. Hannah and Emily do not use any cultivation equipment; only hand-hoe and hand-pulling. In 2017 and so far in 2018, cucumber beetle hasn’t been a problem on the farm. 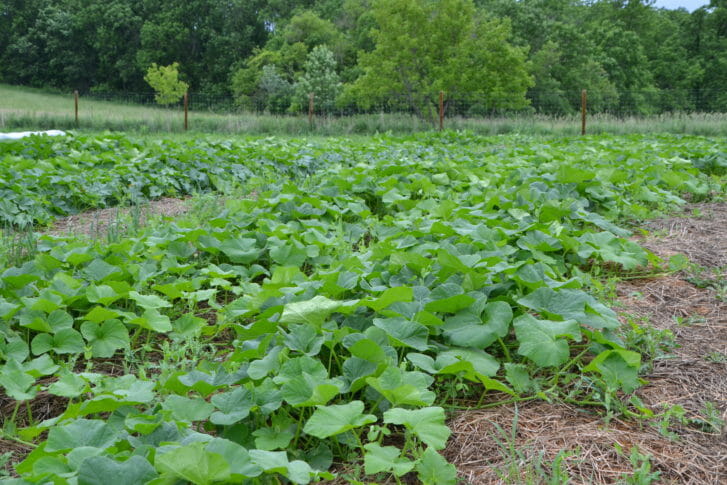 Hannah and Emily have installed a deer fence around 2 acres of land. Just prior to the field day they planted grapes along the fence line. 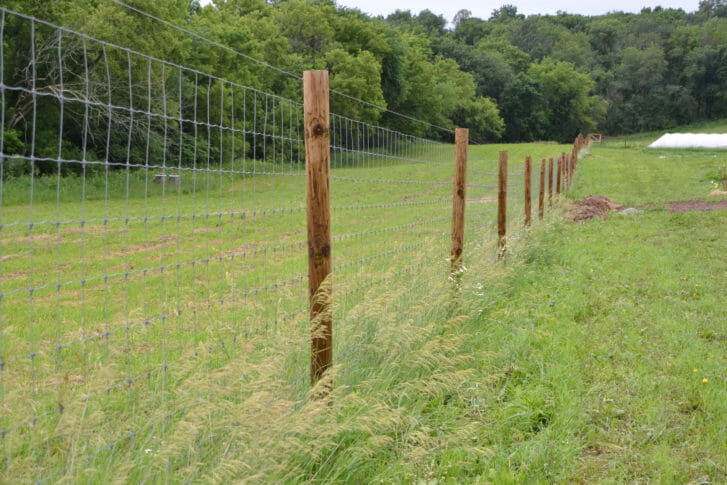 The length of the beds at Humble Hands was determined by the flattest portion of the property, so each row is 150 ft long. The volume of crops they produce is based primarily on what they want for their CSA and wholesale; ensuring they have enough volume and variety for each week (as a mathematician, this practice is fun for Hannah). Farmers market can sometimes be an outlet for the extras and outliers. 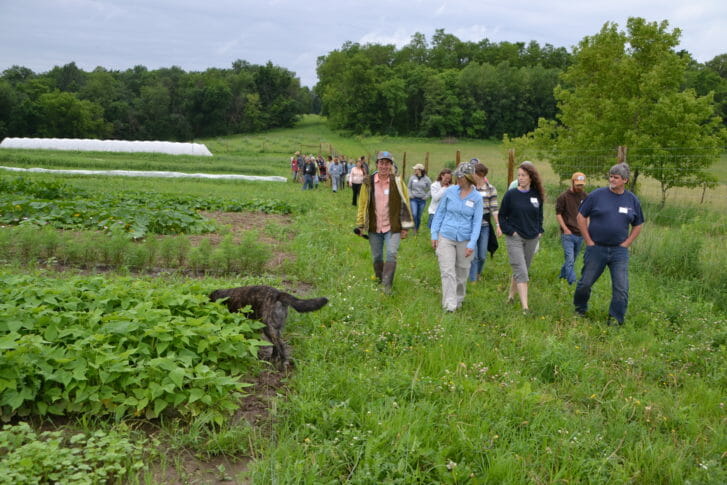 This 21 hp Kubota does the mowing and tilling on the farm. Because of this, all the beds are 50-inches wide. 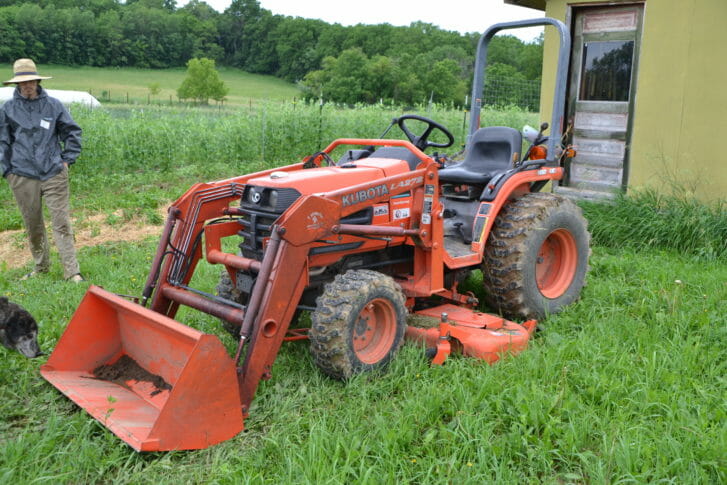 “The most important thing with onions is getting them weeded. Once you finish, you pretty much have to start over again. For Hannah’s birthday party this year we weeded the onions,” said Emily. The photo below shows the onions, in a high-clay soil, next to a rye cover crop that came up so nicely Hannah decided to keep it, and plans to harvest the grain with a scythe. She has done this before; grain from last season was used to bake the rolls served at the field day. 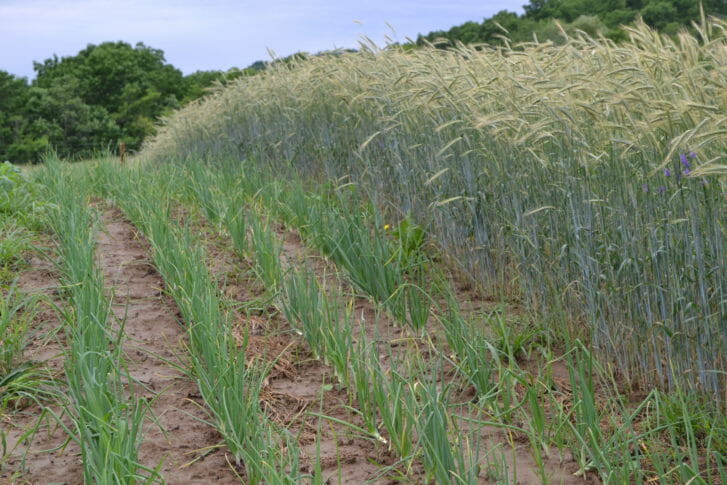 After each crop is harvested, Emily and Hannah till in the bed and seed a cover crop. Last year they mostly used buckwheat during the summer, but this year they are also experimenting barley and clover. Hannah and Emily keep the cover crops mowed to prevent seed set, which makes the field a patchwork of different levels of cover crops growing up after, between, or before the next vegetable crop. The only perennial weed Hannah and Emily are fighting is thistle. They are keeping them from setting seed; letting the thistles put energy into flowering and then pulling them. 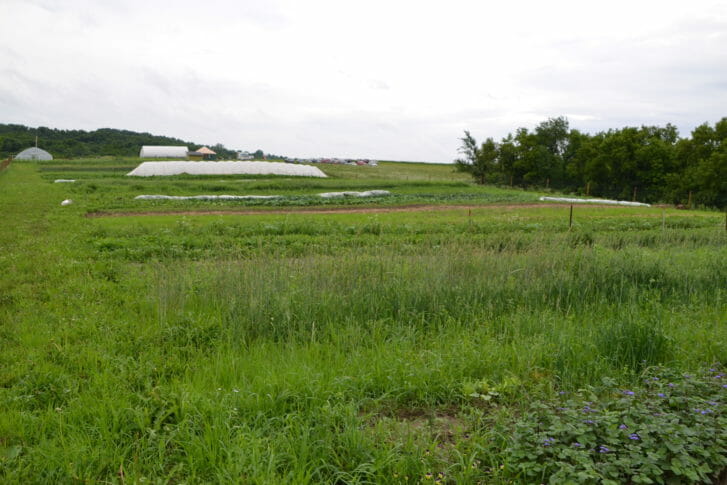 Emily and Hannah installed this Four Seasons Tools high tunnel in May, right when they wanted to plant tomatoes. Hannah and the delivery truck driver unloaded 5,000 lbs of steel by hand, and over the next three days Hannah, Emily, Thor and friends constructed the high tunnel in three days. On the fourth they put on the plastic. On the fifth and sixth days they planted tomatoes. (On the seventh day, we hope they rested). “I’m excited to have the moveable high tunnel – we can grow tomatoes until they finish producing, then move the high tunnel over the greens for the winter,” said Emily. 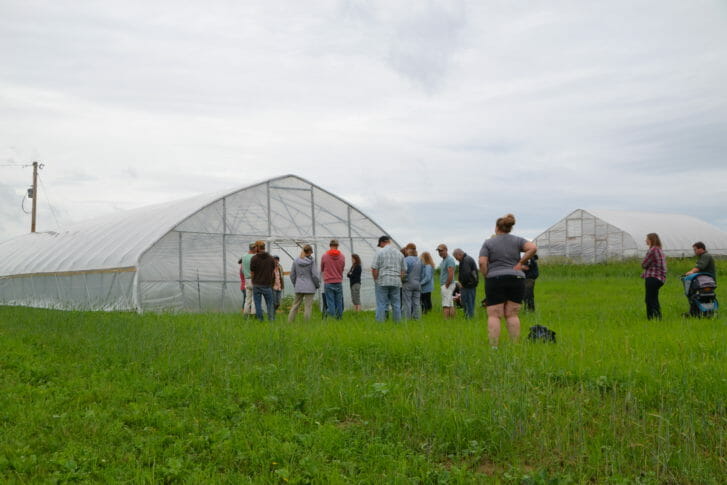 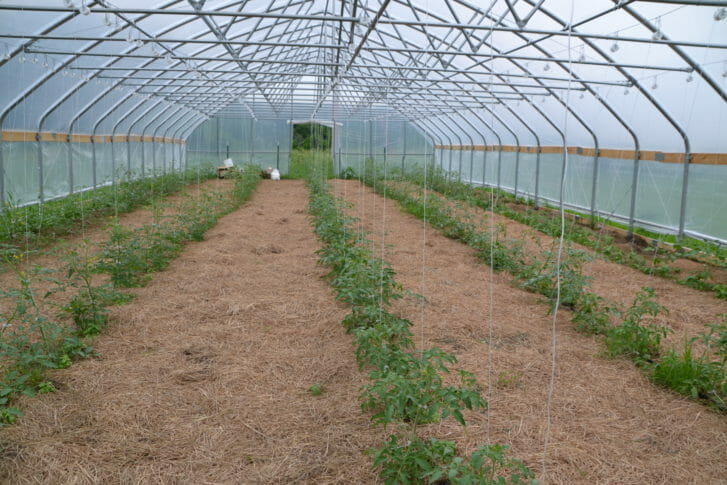 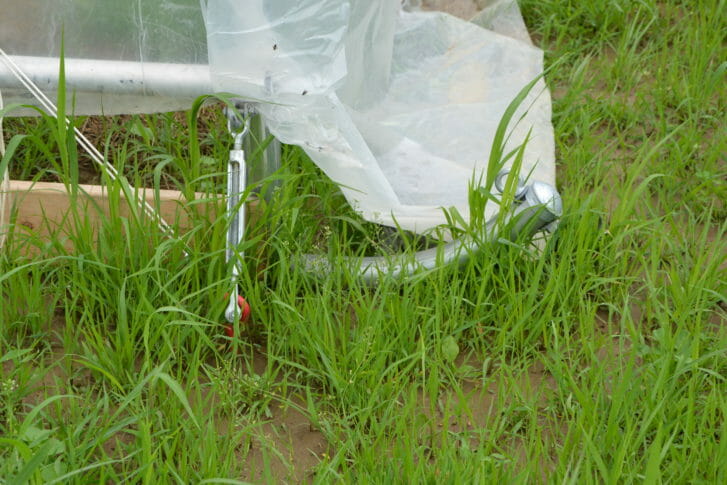 Part of the vegetable fields are currently growing up grafted apple trees. Thor has ~350 varieties planted, about 5-10 trees of each variety. Some of these will be “Mother” trees, and the scionwood will be taken to graft more trees. Over the next few years all the trees will be sold or planted to other areas on the farm, freeing up the bed space for annual vegetable crops. Working with Dan Bussey, the apple historian. The farm uses drip irrigation throughout their crops. Each row can be turned on and off from the lay flat hose. 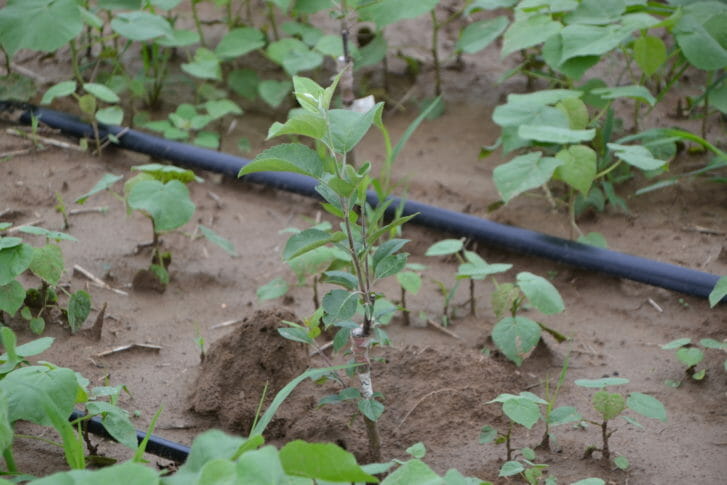 This spinach is going to seed, and they’re letting it go! On purpose! In addition to the apples, Thor is launching a seed company specializing in varieties from the upper Midwest. Instead of growers being paid up-front by the seed company, the growers are paid based 15% of the sales of their seed to customers. This model – essentially commission – shares in more of the risk, but could provide a higher margin of return to the grower, too. Thor selected this model after talking with growers who would have benefited from such a system.  Hannah and Emily are experimenting with spinach seed for this venture. 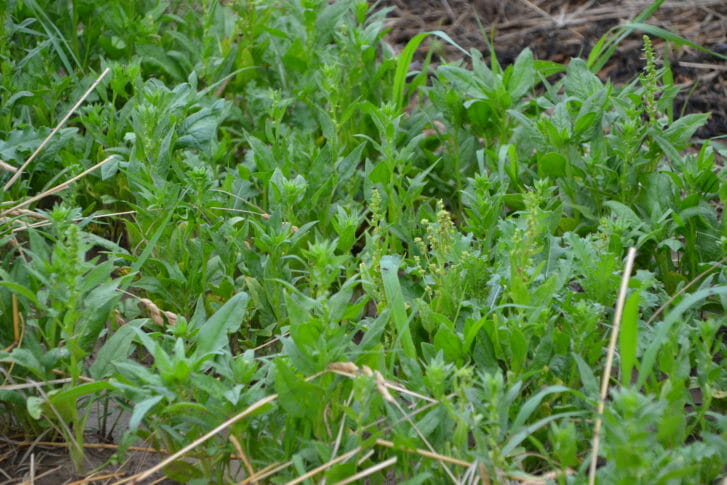 The livestock portion of the farm is Hannah’s project for now, but may eventually join Humble Hands cooperative business. The sheep are a Katahdin-Dorper cross; a hair sheep for meat. I’ve been growing my flock for a few years, keeping the ewe lambs back for breeding. Next year I’ll be selling all the lambs. 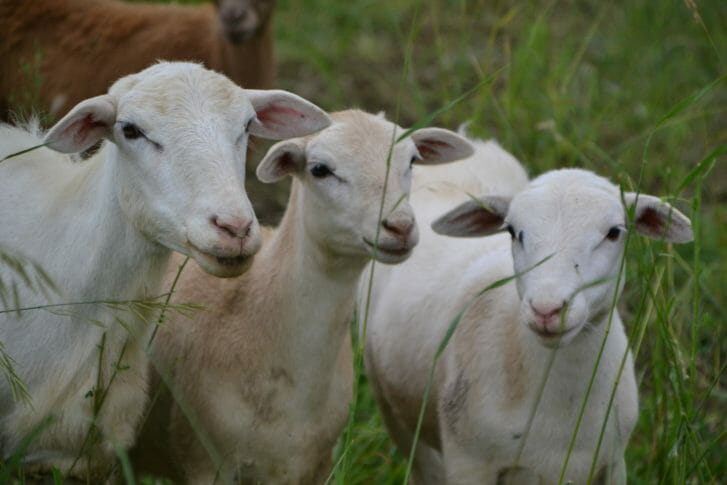 “I decided to experiment with pigs this year, because there was no bacon at the Decorah farmers market. I justified it to myself by saying that they were tilling the ground for areas where I wanted to put trees – the trees – hazelnuts, chestnuts, some hickory and pecan hybrids, are waiting in the greenhouse,” said Hannah.

It takes the 10 pigs about 2 or 3 days to root up a 12 x 60 ft section. Hannah cover crops after them, and then will put in the trees when the ground cover is established. Below, the pigs are on new ground, moved to this spot only 2 hours prior. The pigs are moved every 2-3 days. The pigs came in early May from Driftless Pastures in Seneca, WI.  Mangalitsa-Mulefoot hybrid. Hannah moves the pig pen by herself, though moving the shade structure is a little awkward to manage. The pigs get a soaked organic pastured feed ration. 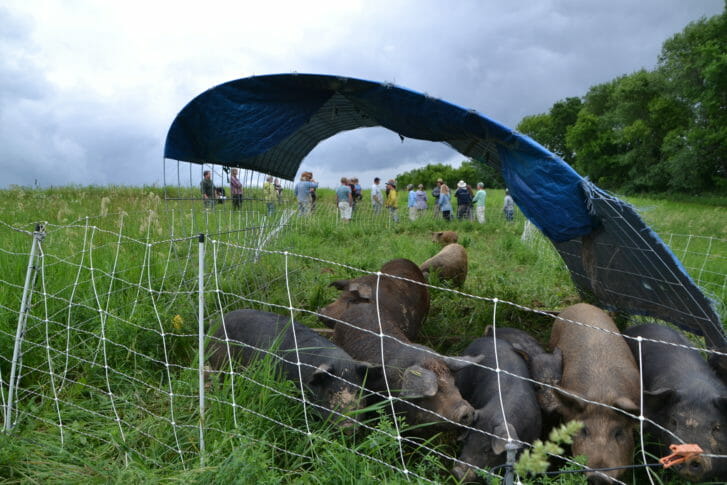 A planned tree-crop area recently vacated by the pigs. 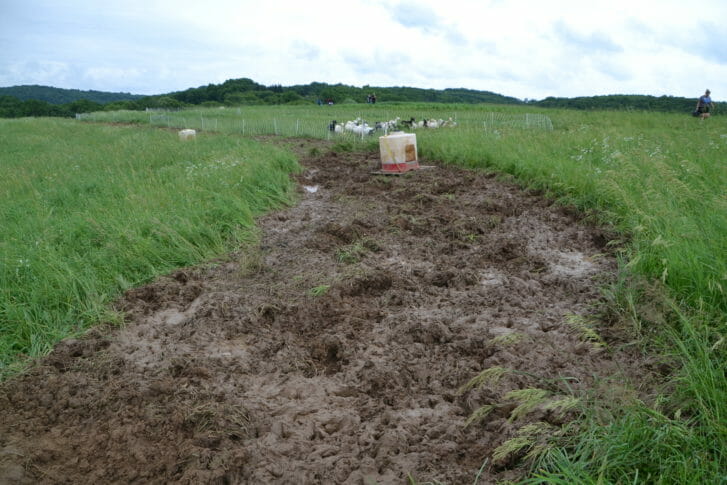 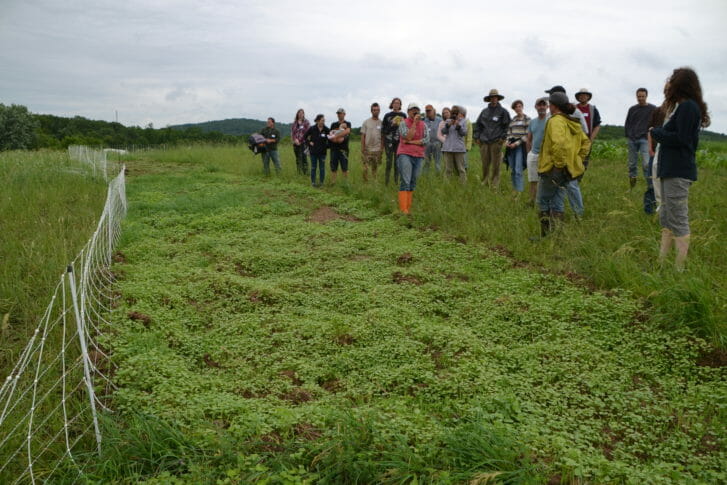 At the end of the field day as the rain began, attendees gathered in the greenhouse to enjoy a potluck featuring a roasted lamb and buns made with grains hand-harvested by Hannah and baked by . 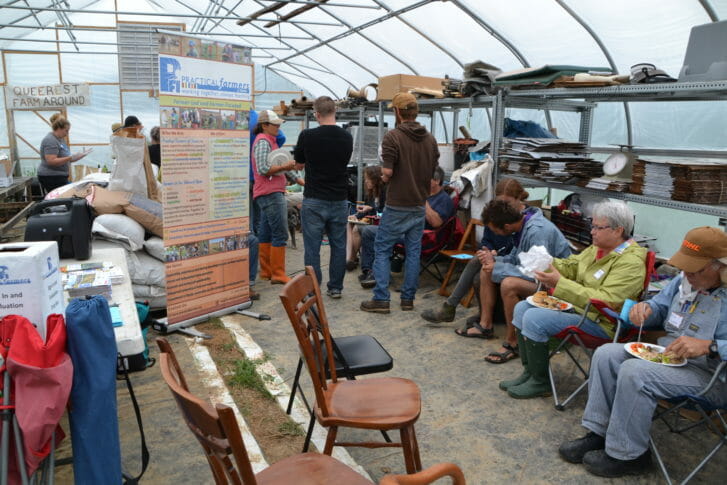