It seems like breweries, both large and small, are getting creative with their products. Consumers are more and more interested in finding unique-tasting products and some are seeking out the locally-sourced brews. So, how do breweries source their ingredients to make a tasty end product? And how can farmers find ways to tap into these markets with what they grow? 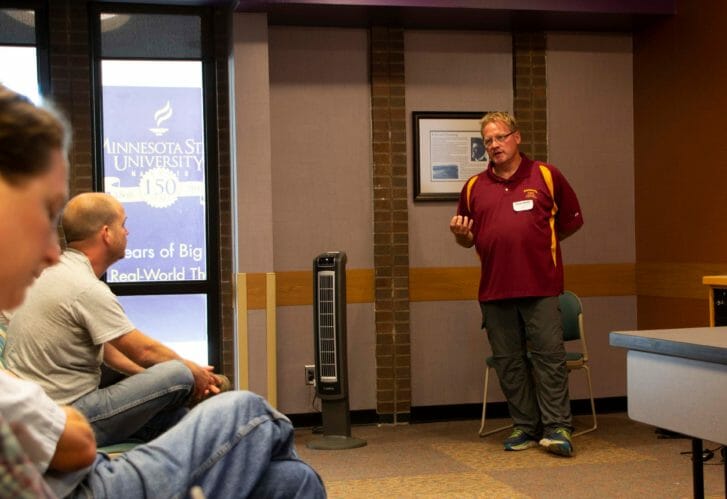 Kevin Smith gave one of the market break-out sessions on how to understand and grow for breweries at the small grains conference, Rotationally Raised: Making Small Grains Work, in Mankato, MN on July 30. Kevin is a professor of agronomy and plant genetics at the University of Minnesota. He has years of experience researching and breeding barley, a small grain commonly used for making beer.

Kevin’s presentation went over some of the basics of the malting and brewing processes, what it takes to produce one of the most important ingredients in beer, malted barley, as well as how breeders develop varieties for malting and brewing.

Producing barley is different than producing other commodity crops like corn or soybeans because of how it’s tracked through the supply chain. Kevin says, “One of unique things about barely versus commodity crops is that the identity of the variety is preserved all the way through the supply chain.” So, if a brewer has a problem with a batch of malt the brewer can trace it back to the malt house, back to the farmer and possibly the field where it came from. Breweries malt barley varieties separately in order to control the taste and quality of the beer they produce.

If you’re going to grow and sell barley, it’s important to know a little bit about what breweries do with it. In order to make beer, there are two separate processes: malting and brewing. Some companies just do the malting or just the brewing, while some of the larger ones do both. 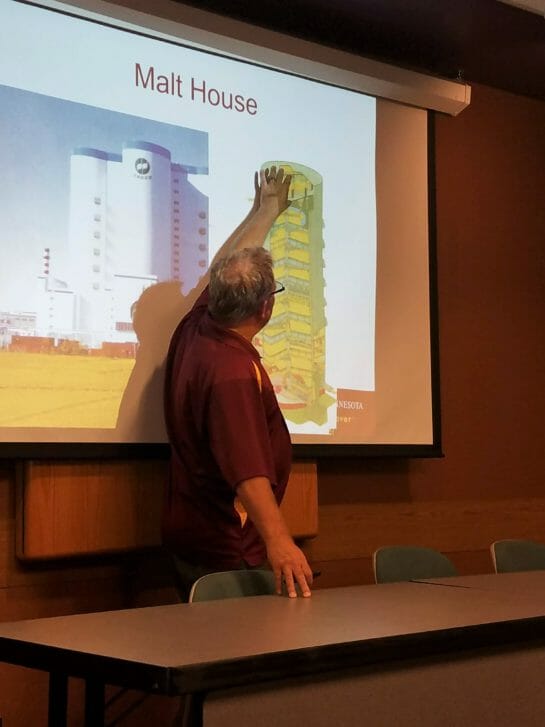 Kevin describes how barley moves through a malt house

With malting you’re taking barley grain and converting it into malt, which is done by softening the grain with water and allowing it to germinate. With brewing, you’re taking that malt and soaking it in hot water to release the sugars which makes food for yeast. The mixture will ferment and turn partially into alcohol. So, making beer is a bit of bubbly chemistry. 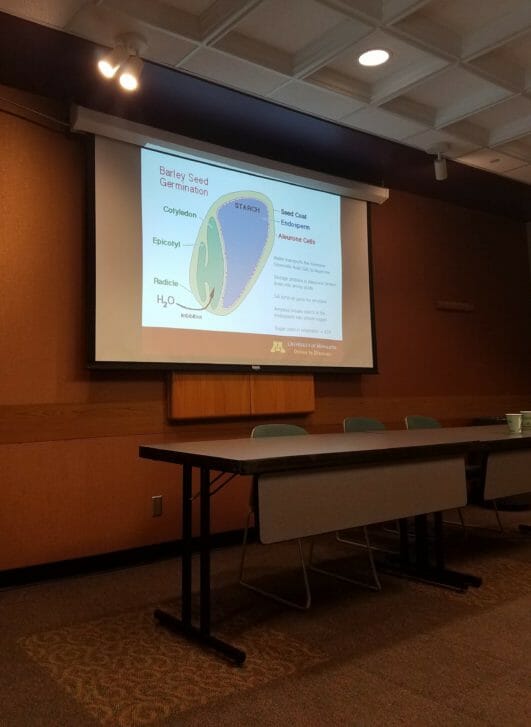 When barley gets railed in for the malting process, it goes through a cleaning step, and then it goes into a steeping tank for the grain to take up water. Harvested barley is stored at about 13% moisture so the steeping process brings the grain up to about 40% moisture.

The water softens the kernel, allowing the seed to germinate. Because you need a living seed for malting, germination rates are really important. During malting, big storage proteins in the seed are broken down to create enzymes, which are needed to break starch down into smaller pieces for the yeast to feed on during fermentation.

When the water-soaked barley passes the “smoosh test”, the malting process is stopped. The germinated seed will go into a kiln to dry – the temperature and amount of time it’s dried determines how much flavor is added. This is where light or dark malts come into play.

The brewing process includes mashing, lautering, boiling and fermentation. To start, you take the malted barley and run it through a mill to expose all the starches. Then, hot water is added to start the mashing process, which lasts for only about an hour or so. Then the temperature is raised to stop the process. At this point some of the sugars have been converted into alcohol, but not for the entire mash. Kevin noted that you need some sugar left to have an interesting tasting beer.

In lautering, the sugary liquid known as wort is then separated from the spent grain and filtered. After this, the wort is boiled to sterilize the beer and extract oils from the hops. The bitter wort is transferred to fermentation vessels for three to seven days, and the yeast is added at this point. While complicated, Kevin says, “It’s good to know a little bit about the malting and brewing processes involved to help understand things about raising barley as a crop.”

There are very few barley varieties available at any one time because they are tracked throughout the supply chain. Once brewers find a variety they like, they usually want to stick to it as part of their recipe, especially with larger brewing companies.

Kevin says, “There was a time where 80% of the acreage in the Midwest was one particular variety”. The downside to having so much of one variety makes the crop more vulnerable to disease though. 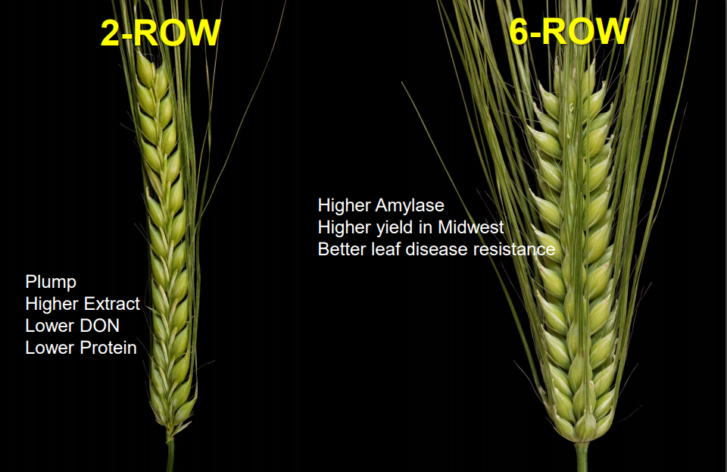 Barley varieties come in 2-row or 6-row heads. So if you look at a head of barley, the 2-row varieties only have a spike on each side of the head. With 6-row barley there are three on each side. Keep in mind that more spikes may make more kernels, but they will tiller or grow out more so it doesn’t necessarily mean more yield. Kevin says 6-row barley seems to do better in the Midwest, while 2-row barley thrives in the western U.S. 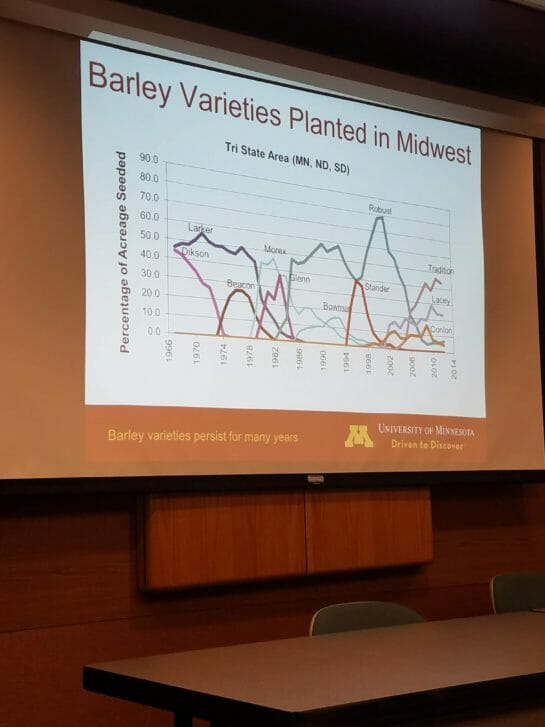 Barley varieties grown in the Midwest are relatively limited in number

Larger breweries might add other grains to their beer, known as adjunct. Since 6–row barley has a higher enzyme level, it’s easier to mix with another ingredient or adjunct like corn. Craft brewers are more traditional in their use of ingredients and generally use 2-row barley varieties since they have a higher malt extract.

Kevin says there are about 100,000 acres of barley left in northwestern Minnesota. Because of this, finding a way to get barley to market can be challenging. The crop may need to be transported a long distance by semi or rail to get to the malting house. So before you start growing barley, it’s very important that you know where it’ll be sold. And if you sell barley through a big malt house, you’ll need a contract.

On-farm storage is also pretty important. Some grain may need to be stored on your farm since the malting house may not be able to accept it all at once. And, as far as risk management goes, it’s good to know that there is a malting barley endorsement to cover your losses in states like Minnesota, Nebraska, or North Dakota. Read more about it here or check out Kevin’s presentation.