Dennis Carney’s conservation ethic stems from observing too much soil erosion and soil movement into streams and rivers. He’s a fifth generation grain farmer between Marble Rock and Greene in north-central Iowa. Most will deny that soil erosion is of any concern on such a flat landscape teeming with rich, black soils. But Dennis outright disagrees with this line of thought. “Wind erosion does happen!” Dennis exclaimed to attendees of his field day on Sept. 6 as he shared the practices he uses on his farm to conserve soil. Since coming back to the farm in the early 1980s after attending Iowa State University, Dennis has strategically incorporated no-till, cover crops and the Conservation Reserve Program (CRP) as routine practice. 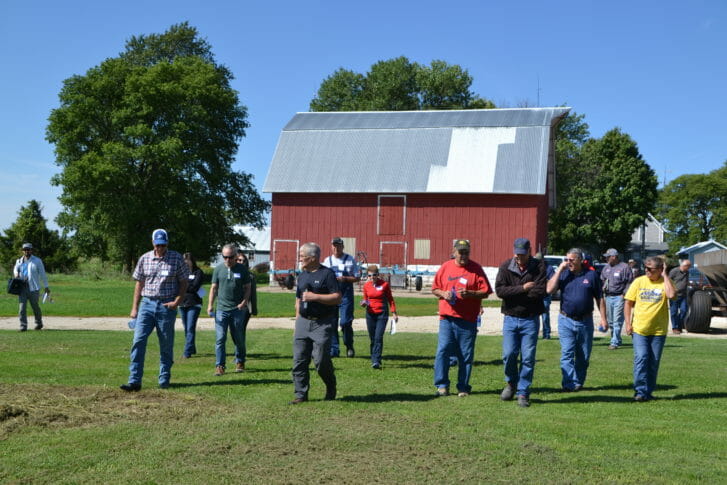 Dennis Carney (center with microphone) leads field day attendees to a corn field where a cereal rye + rapeseed cover crop was flown on a week prior.

The road to no-till

Dennis kicked off the day by explaining how his conservation ethic evolved since taking courses on soils at ISU. He cited a quote by Hugh Hammond Bennett that has stuck with him for years: “Americans have been the greatest destroyers of land of any race or people, barbaric or civilized.” Bennett, of course, is famous for the creation of the Soil Conservation Service after addressing Congress in 1935 as a dust cloud moved in from the Great Plains and Midwest that shrouded Washington, D.C. The SCS is now the Natural Resource Conservation Service.

Adopting reduced tillage practices was the first step in the process for Dennis. “I don’t really like riding in a tractor,” Dennis says about one of the reasons he is drawn to no-till. He admitted, though, that the thoughts and opinions of his father and grandfather were initial obstacles to overcome. Their first foray into no-till began by planting corn into undisturbed soybean stubble. “It wasn’t that difficult!” Dennis says. 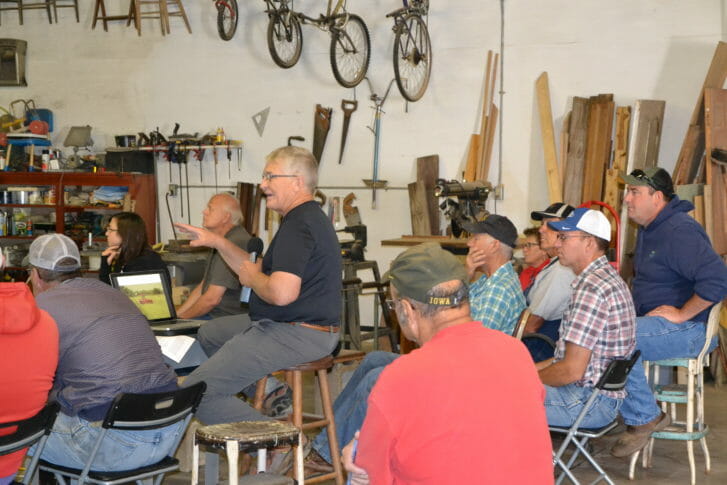 Dennis Carney sharing with the group his reasons for no-till and cover crops.

No-till leaves a lot of crop residue on the soil surface and that provides some protection for the soil against wind and water. But that residue is not enough protection, Dennis says. After farming for 35 years, Dennis began learning about cover crops from fellow farmers and from members and staff of Practical Farmers of Iowa. It was the scientifically verified improvement in soil erosion prevention as well as water quality improvement that led to Dennis adopting cover crops on the farm. 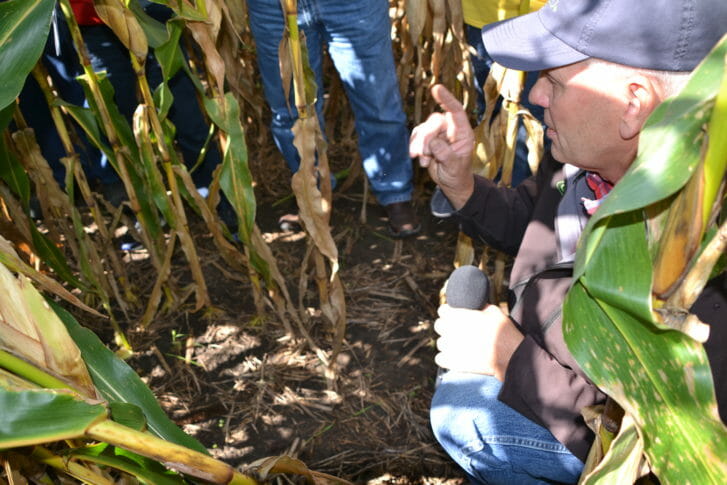 Dean Sponheim of Sponheim Ag Services shows field day attendees cereal rye and rapeseed seedlings in standing corn. The cover crops were flown on a week prior to the field day. 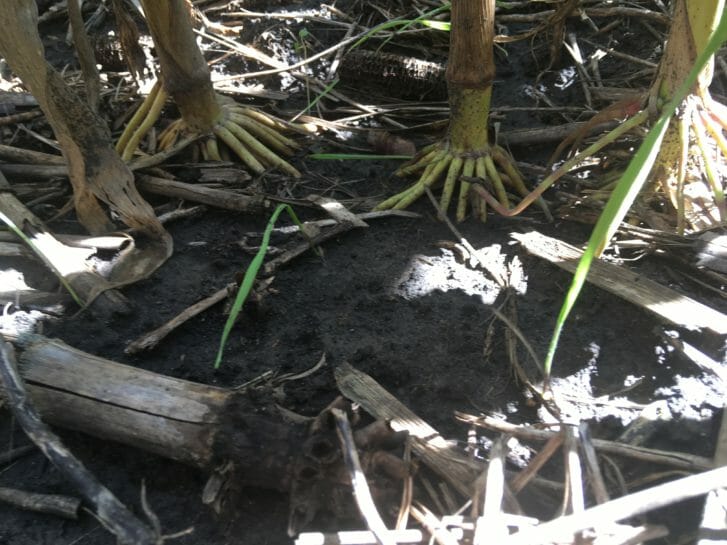 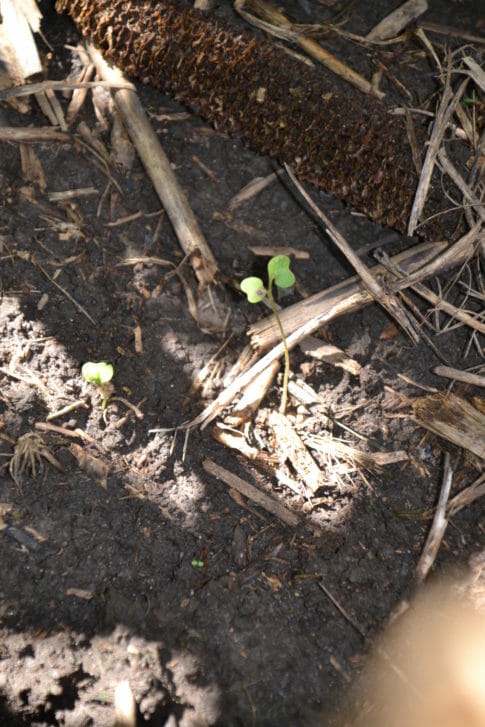 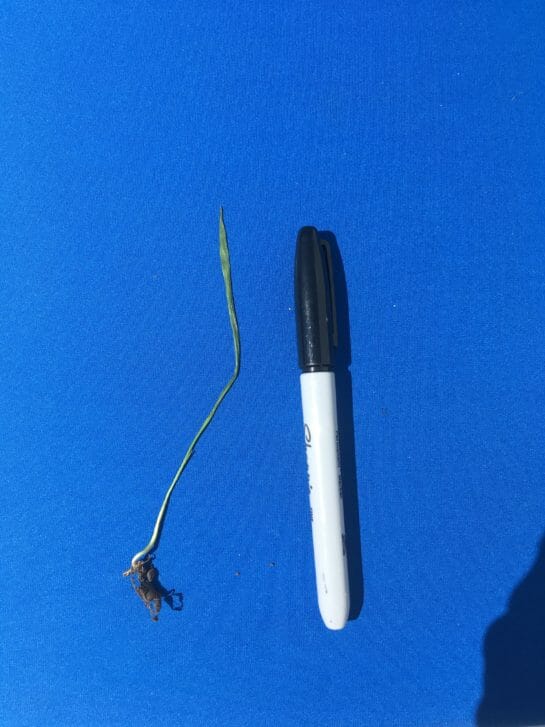 Dennis is moving towards seeding a cereal rye cover crop on all acres going to soybeans or corn as his experience has grown. Because cereal rye consistently overwinters, Dennis likes how the cover crop takes off growing in the early spring protecting the soil. Come cash crop planting time, Dennis is in no rush to seed corn or soybeans in April. Instead, he’s typically waiting until May. “The corn I plant in the first week of May comes out of the ground fast and generally catches up to the corn my neighbors plant in April,” Dennis says. He’s also impressed by how well soybeans emerge through a thick stand of a cereal rye cover crop. Dennis seeds soybeans the day before terminating the cover crop which results in a lot of residue to plant through. “It works surprisingly well,”  Dennis says. “Soybeans are amazingly tough coming through all that residue.” He’s also seen improvements in weed control in soybeans thanks to the cover crop. PFI farmers have previously documented this in on-farm research trials as part of the Cooperators’ Program.

The improvements in soil structure, water infiltration, erosion protection and weed control now has Dennis asking others “How much money are you losing by not doing no-till and cover crops?”

View the slideshow depicting machinery and field passes associated with no-till and cover crops that Dennis shared with the group.

Dennis has also been one of a few farmers working with ISU Extension Entomologist Erin Hodgson on a project investigating soybean host-plant resistance to aphids. Dr. Hodgson explained that for the past several years, plant breeders at ISU and other universities in the Midwest have been using traditional breeding techniques to develop soybean varieties that are resistant to aphids. In trials, these resistant varieties show no yield drag compared to their susceptible counterparts. They are seeing far less aphids on resistant plants than they are on susceptible plants. Dr. Hodgson explained that aphids are far less successful in persisting and reproducing on resistant plants owing to a change in aphid body chemistry resulting from feeding on the resistant soybeans. 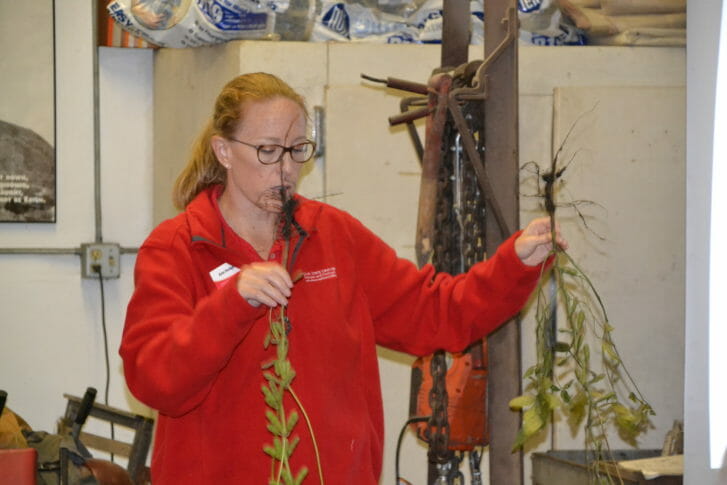 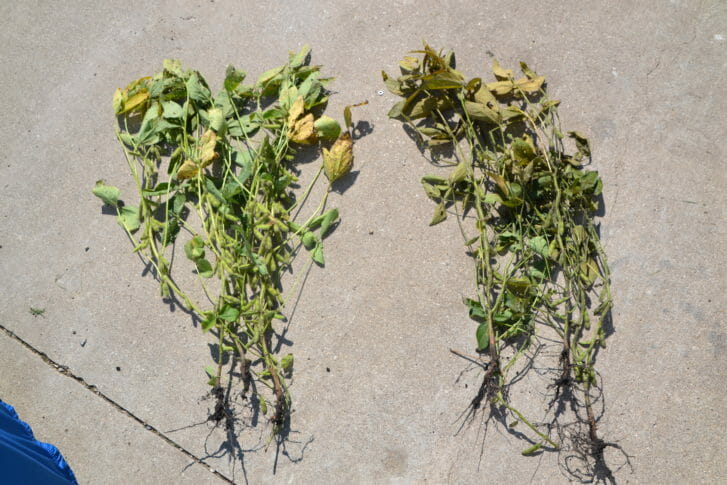 Learn more about Dr. Hogson’s and Erika Rodbell’s work in this handout they provided at the field day.

Dr. Hodgson says the resistant varieties are available through Albert Lea Seed House, Blue River Hybrids and the ISU Research Foundation; that they do not cost more than susceptible varieties; and that they’re a good choice for non-GMO and organic growers as no varieties with transgenic herbicide tolerance are yet available.

We’d like to thank the Iowa Farmer’s Union, Albert Lea Seed House and the Iowa Ag Water Alliance for sponsoring this field day.