On a damp afternoon in early September, 50 people gathered at the agroforestry site Red Fern Farm in southeast Iowa to learn about a variety of fruit and nut crops. Tom Wahl and Kathy Dice started the farm and nursery more than 30 years ago and now grow over 75 tree and shrub species that produce a range of common and not-so-common fruits and nuts. For a wide variety of information about the crops they grow and sell at Red Fern Farm, visit their website.

Tom and Kathy split the group in two and each took their group on a tour of a portion of the farm. Kathy’s group learned all about chestnut production and marketing, and Tom’s tour covered heartnuts, pawpaws, Asian pears, honeyberries, and American persimmons. The groups reconvened for a break, then switched tour guides. 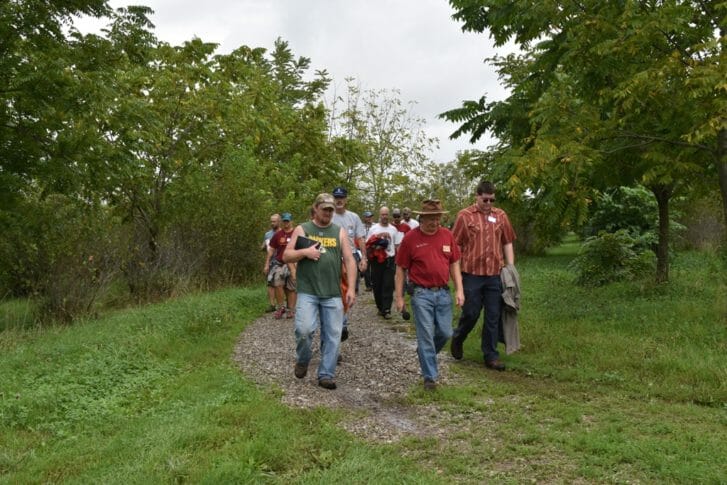 Tom’s tour began with heartnuts, the only walnut in the world that, according to Tom, cracks out whole, unbroken kernels. The heartnut is a genetic mutation of the Japanese walnut.  The heartnut is notoriously difficult to graft successfully, but for heartnut production, heartnut scion grafted on a black walnut rootstock bears quickly and heavily.  Ungrafted heartnut seedlings are often found in nurseries, but seedling trees risk reverting back to producing nuts more similar to a Japanese walnut.  Like other walnuts, it emits the juglone hormone, which is toxic to certain plants like tomatoes and potatoes, so caution needs to be taken when selecting a site. 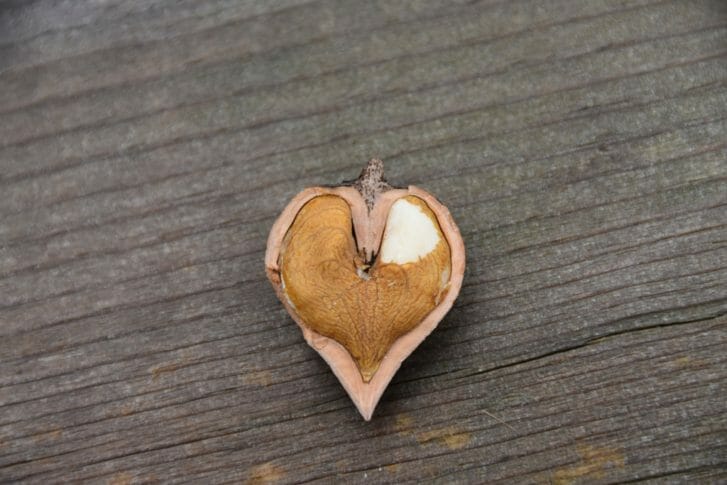 Due to their heart shape, not only is there a market for the sweet and mild nut, but Tom and Kathy are able to sell the empty shells for $6 a pound. Otherwise, they sell to you-pick customers: $2 a pound for un-husked clusters, or $4 a pound after being husked.

We hardly needed to move from under the heartnut tree to find the next crop on our tour, as the pawpaws grow very well as an understory tree.  Still, they do produce better in full sun. 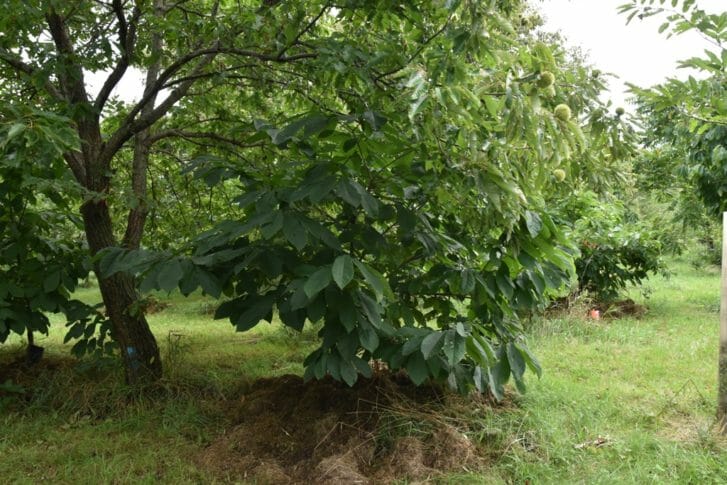 The pawpaw is a tree crop native to the area that produces a fruit that has custard-like texture and flavor described as a cross between a banana and a mango. They ripen throughout September and October, and though they don’t keep very well (2-4 days, longer if refrigerated) Tom says there is nearly always more demand than pawpaws. The ripe fruits are so soft, they recommend mulching heavily under the trees to provide cushion for the falling pawpaws. Fortunately, mice do not prefer the bark of a pawpaw tree, so the concern of providing mice habitat around the base of a tree is minimal. 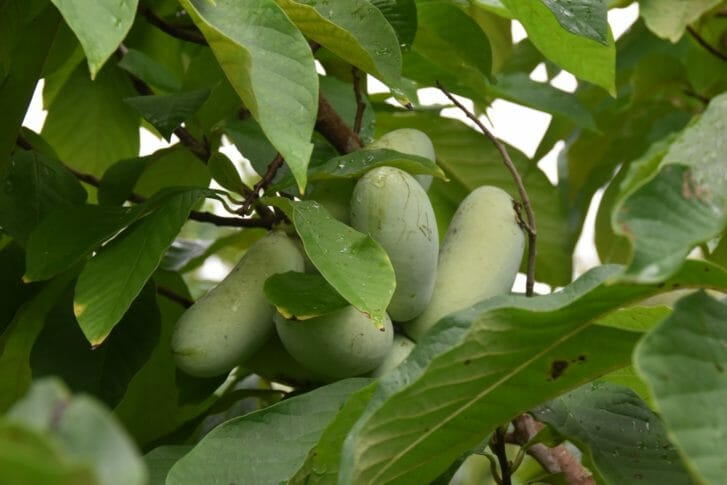 Tom recommends planting seedling pawpaws rather than grafted trees, as the grafted trees are shorter-lived and will sucker. The young trees need care during establishment, including shade and weed control. He recommends two-foot tall tree shelters to help them establish. Trees typically begin to bear fruit after 4-6 years; Red Fern Farm charges $3 per pound for you-pick or $5 per pound pre-picked.

Along with nearly all the crops found at Red Fern promoted by Tom to other growers, the Asian pear is recommended because of its ease of management. A good sized Asian pear tree will take 5 or 10 minutes to prune, compared to what Tom says could be an hour of pruning on a comparable apple tree. In addition, it requires no spray, though he recommends finding a blight resistant variety. The most labor required for Asian pears is for thinning the crop. The fruit is apple-shaped and crunchy, but with a russet-like skin and pear flavor. Commercial prices for the pears can range from $2.50 to $8.50 per fruit. 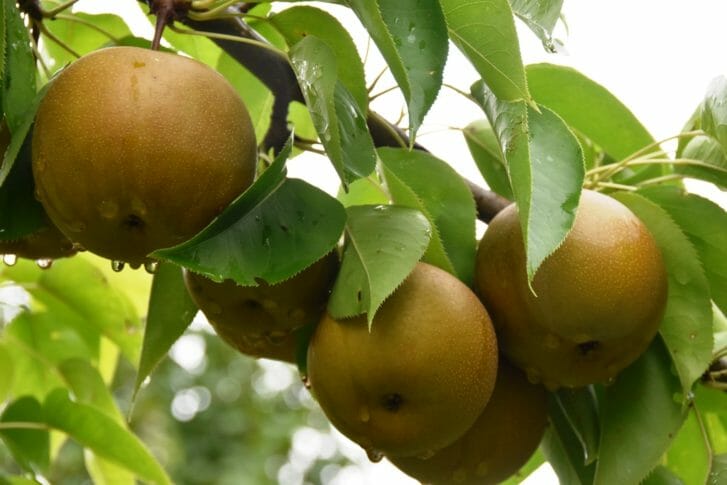 A cold-hardy, native fruit recently added to the farm is the honeyberry, a shrub-like honeysuckle that produces unique edible berries. Some varieties are said to have a black raspberry or blueberry flavor, and can be shaped similar to a grape or elongated blueberry. They bear fruit early in the year – by June – but most varieties need to be hand-harvested as the berries tend to hide under leaves. They’re shade tolerant, and can be planted in the margins of forests or as an understory crop to chestnuts and other large tree crops. A single bush can produce 8 – 12 pounds of fruit, which can be sold for $12 per pound in some markets.

The American Persimmon, like many of the other native crops at Red Fern Farm, is valued because it does not require any sprays to produce fruit. As Tom says, the genus name for persimmon literally means “fruit of the Gods,” and is the single most popular fruit tree in the world. When ripe, persimmon has nearly the highest percent sugar (35 brix) of any fruit. Their commercial rarity is due to a small window of ripeness– astringent when underripe and very soft and delicate when ripe. Yet, a large tree can yield 5,000 pounds of fruit, sold at Red Fern for $2 per pound to you-pick customers. 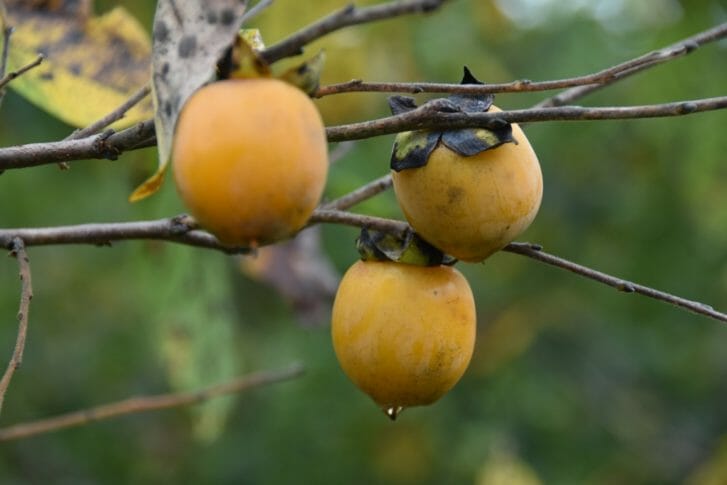 After a short break to enjoy pawpaw ice cream, bars and fruits, and persimmon brownies, pudding and fruits, guests switched tour guides to see the other half of the farm.

Kathy’s portion of the tour covered the crop Red Fern Farm is most famous for: chestnuts. Everything discussed on the tour, and more, can be found in their Iowa Chestnut Grower’s Primer. Chestnuts inherently want to grow as a bush rather than a tree, so they highly recommend using a five-foot tall tree shelter for establishing a healthy tree (seen in the photo with Bart and Adam above). The ventilated tubes act like a greenhouse, they protect it from deer browsing, and prevent the tree from growing branches too low on the trunk. Once the tree peeks out the top of the shelter, prune the top to encourage branching at that height. 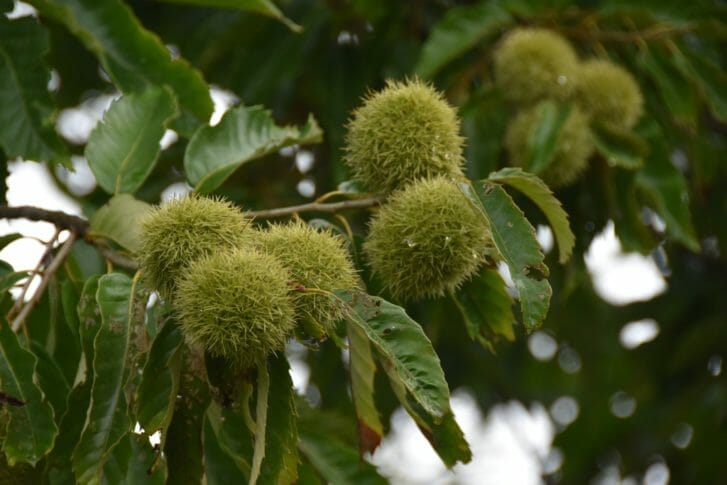 Kathy recommends planting chestnuts with 20 foot spacing between them, on well-drained slightly acidic soil. Though Tom says the Iowa Woodland Suitability Recommendations needs updating, anything suitable for a White Oak will be ideal for chestnuts. The trees are tip-bearing, so its important they don’t grow close enough together to touch. After 15 to 20 years, the 20-foot spacing may not be enough, requiring every other tree to be removed as needed. During establishment they use the herbicide Oust, and Kathy says organic fertilizer such as chicken or turkey litter and irrigation will speed up their growth.

Red Fern starts with grafted trees because their known genetics produce quality nuts, and the grafted trees begin producing quickly. However, seedling trees are preferred for a grove because they grow faster and produce more nuts per acre. Therefore Tom and Kathy collect the nuts from their grafted trees to plant as seedlings, which they sell in their nursery, ensuring those trees have quality genetics as well as the vigor of a seedling tree.

Kathy took time to talk about the farm’s marketing strategies for the chestnuts, which involves a couple months of intense scheduling with a list of customers. Currently there are 230 customers on their list who will be given a date and time to come and gather nuts using Holt’s Nut Wizard. Weekend times book very quickly, and Kathy says they charge $0.25 per pound less for those who come gather on weekdays ($2.50 per pound). The alternative, if Red Fern Farm ever had excess inventory (which they haven’t), is to sell nuts to the buying cooperative Prairie Grove Chestnut Growers in Columbus Junction, who will pay between $1.40 and $2.50 per pound, depending on size. 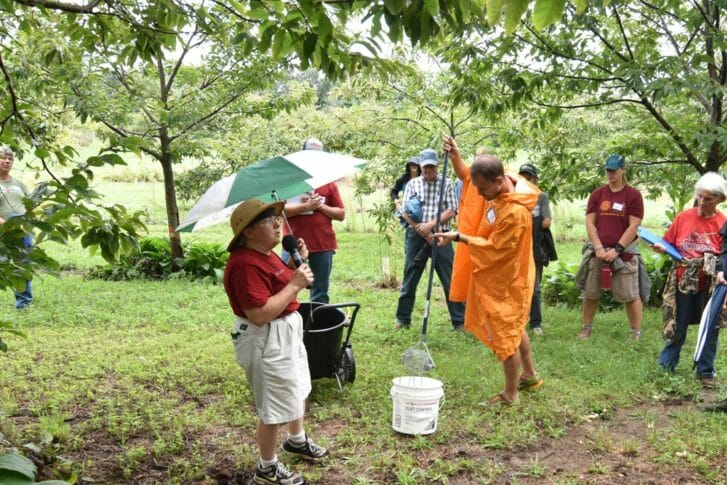 For more information and a source for many of the trees mentioned, visit the Red Fern Farm website. Thank you to this field day’s sponsors: the Sustainable Iowa Land Trust, and the Iowa Farmers Union. 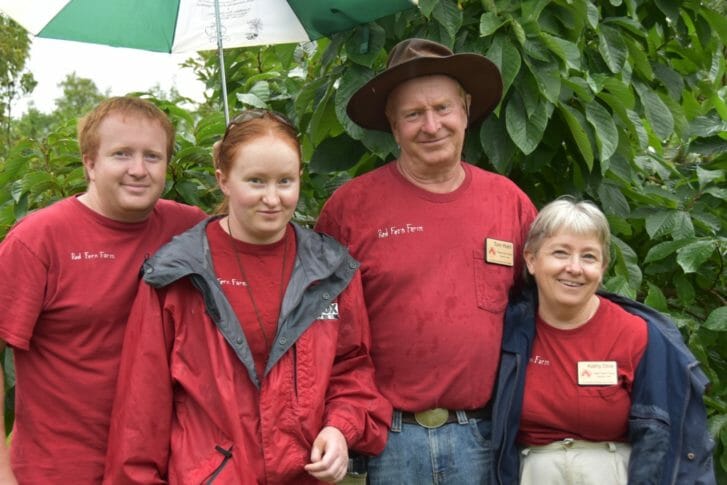 Thank you to our wonderful field day hosts James, Theresa, Tom and Kathy!