Three generations of the Deal family were on-site to lead nearly 50 field day attendees on a tour of their apple house and farm on a recent September morning. While Tracy Deal orchestrated the field day logistics behind-the-scenes (and managed the youngest generation still-in-training) and Cindy Deal managed the on-farm store, brothers Chris and Benji helped their father, Jerald, run the field day. 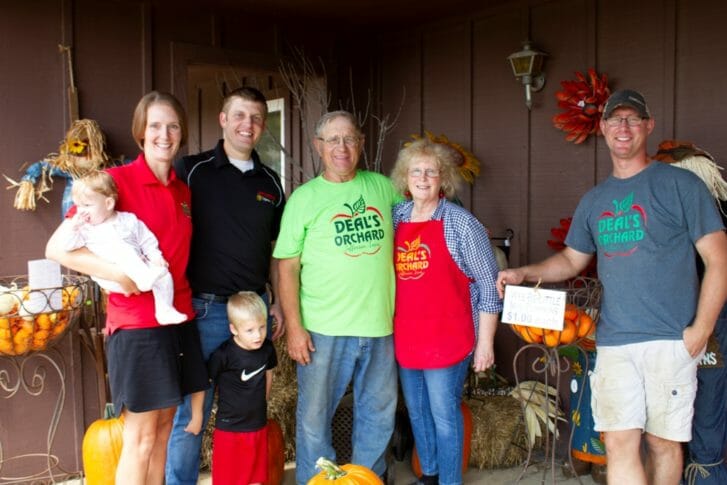 Left to right: Tracy and Chris Deal with their two children, Jerald and Cindy Deal, and Benji Deal.

In 2017 Deal’s Orchard celebrated their 100 year anniversary as a family farm. Over the years the farm has diversified beyond apples to include pumpkins and squash, Christmas trees, sweet corn, tomatoes, a range of value-added apple products and a site for agritourism. Starting the day with freshly-made apple cider donuts, attendees heard a brief history of the farm then learned start-to-finish about their apple cider operation—including their hard cider production—before venturing out to see their pumpkin patch and high tunnel tomato production.

Each year Deal’s Orchard harvests around 13,000 to 15,000 bushels of apples from 45 acres of apple trees, which employs four to six workers for picking during the height of the season. The harvested apples are brought into the apple house to be cleaned and sorted, then quickly moved into the cooler. Honeycrisp is the exception to this. This popular but difficult variety stores better if left in the ambient temperatures of the apple house for three before going into the cooler. In addition, apple grading machines easily bruise Honeycrisp,  so they need to be hand-sorted. Because of the additional labor required in the packhouse and in thefield, the Deal’s, and all other Iowa growers, charge up to three times more for Honeycrisp apples than any other variety.

The other 24 varieties of apples grown on the farm arrive in the pack shed and go through the grading machine. The machine moves the apples down a conveyor belt to sort them by size, where they’re then hand-graded by a team of employees. The employees sort based on quality: 1 being best, 2 being sold at a slight discount for baking, 3 is bruised or blemished fruit that will be used for cider, and the 4th grade is rotten fruit that goes to livestock. 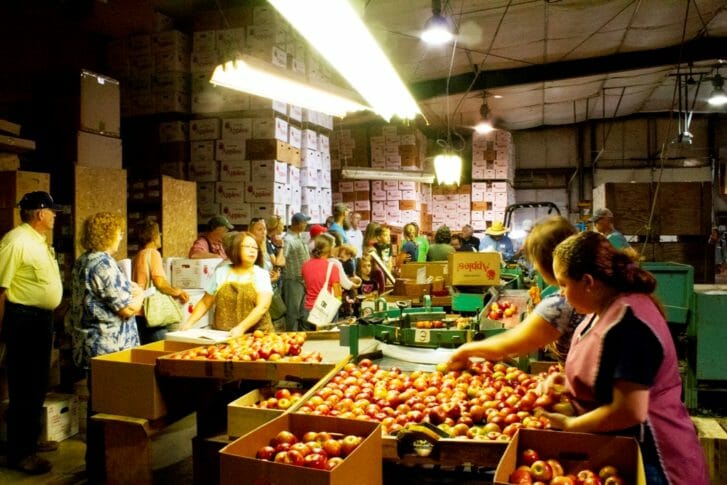 After grading, the apples are taken to the cooler, which is kept at 32 to 34 °F. At the time of the field day, Jerald estimated 15 to 20 percent of harvest was complete; after the peak of harvest, their cooler will have bulk bins and boxes stacked to the ceiling. The cooler doubles as a fermentation room for Benji’s hard cider operation, which was first licensed in 2011. This year, of the 30,000 to 35,000 gallons of fresh cider produced at Deals this year, Benji will ferment 3,000 gallons into hard cider. 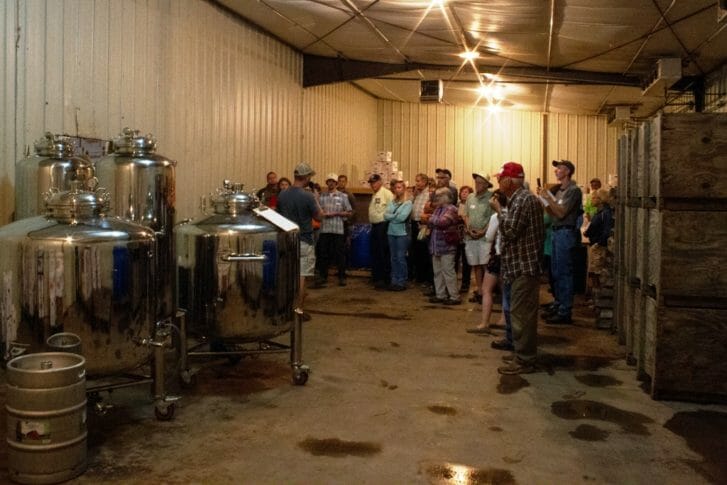 Twice daily the Deals spray water on the floor of the cooler to prevent the cooling system from dehydrating the apples.

The orchard doesn’t grow any hard cider-specific apple varieties, but Benji likes to double the amount of tart apples in the fresh cider that will be fermented. Once pressed into juice, the cider is given sulfite to kill any natural yeast, then Benji introduces the type and quantity of yeast preferred for his final product. To ferment, they use the temperature-controlled brite tanks, as well as 55-gallon food-grade barrels. After the tank fermentation, fresh cider is added back, in a process called “back-sweetening,” and the final product is kegged or bottled and distributed throughout central Iowa.

During harvest season the orchard presses cider three days a week, and were pressing during the field day. Their crew presses around 1,000 gallons of cider in a session, getting three to four gallons out of a bushel of apples. Retail, Benji says, they can sell a bushel of Grade 1 apples for $35; but a bushel of apples that goes into cider will sell for $5.50 per gallon (wholesale) or $7 (retail), which translates to somewhere between $16.50 and $28.00 per bushel. Cider is a smart way to find value in lower quality apples, but considering the equipment and labor that goes into processing the fruit, Grade 1 apples are more profitable. 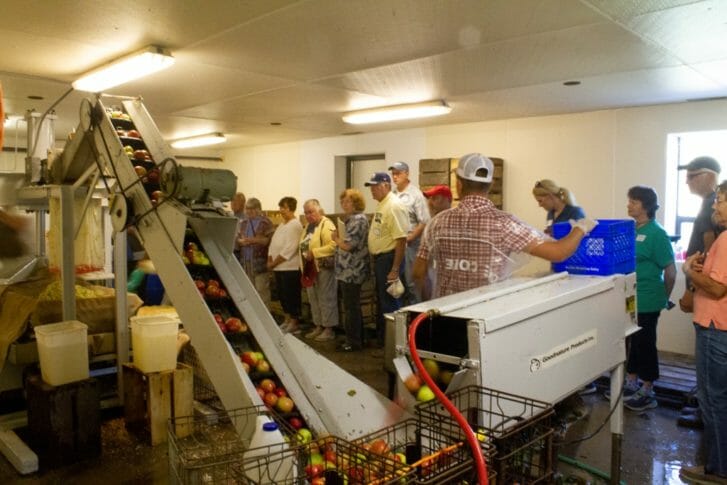 The apples are first sanitized, then loaded onto the elevator. 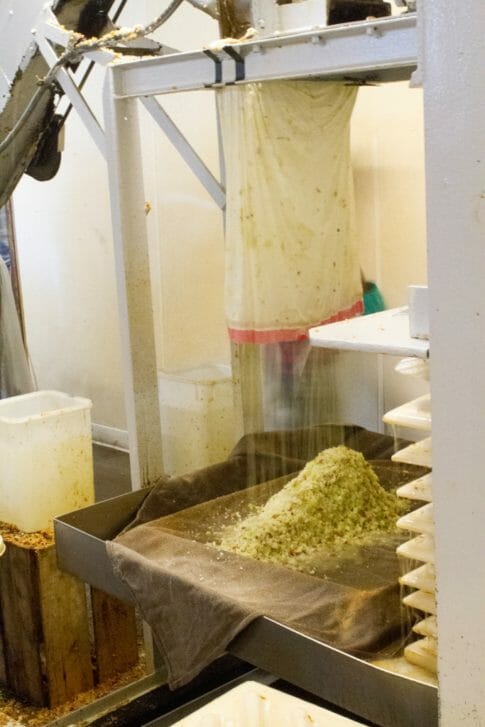 Next, they’re dropped through a grinder that chops the apples into a pulp. A cloth is laid over a frame and filled with the pulp, then folded and stacked. 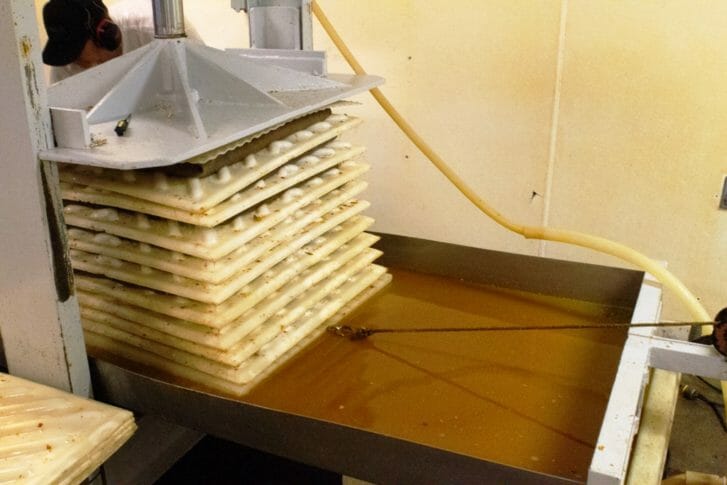 Once the apple-pulp-sandwich reaches ten layers, a hydraulic press squeezes 30 to 40 gallons of juice out of the pulp. 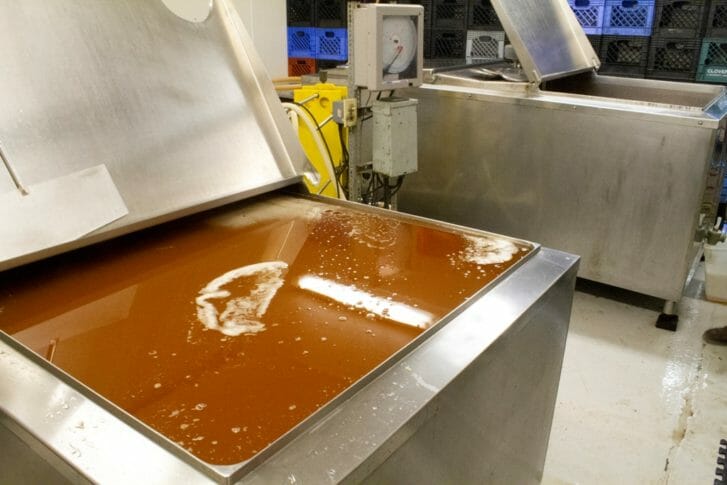 The cider is pumped to tanks that run the juice through a flash-pasteurizing machine, which heats it to 170 °F for a few seconds.

Out on the Farm 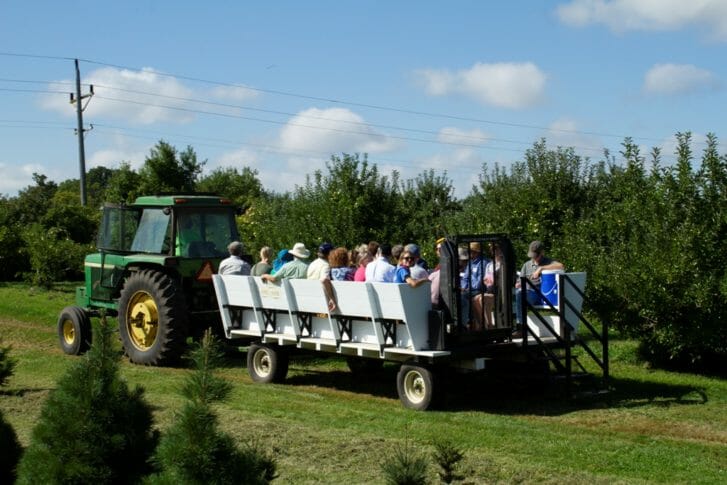 The 45 acres of apple trees at Deal’s is comprised of several orchard plots. We loaded two wagons and toured through the orchard just outside the apple house, stopping to pick and snack on Chieftain and Golden Delicious apples. Most of the trees at Deals are grafted onto semi-dwarf rootstock, which means they’ll only grow to a height of 15- to 18-feet tall. Jerald Deal is in charge of the orchard management, and told attendees this spring’s high temperatures and rain led to a horrendous infection of fire blight. 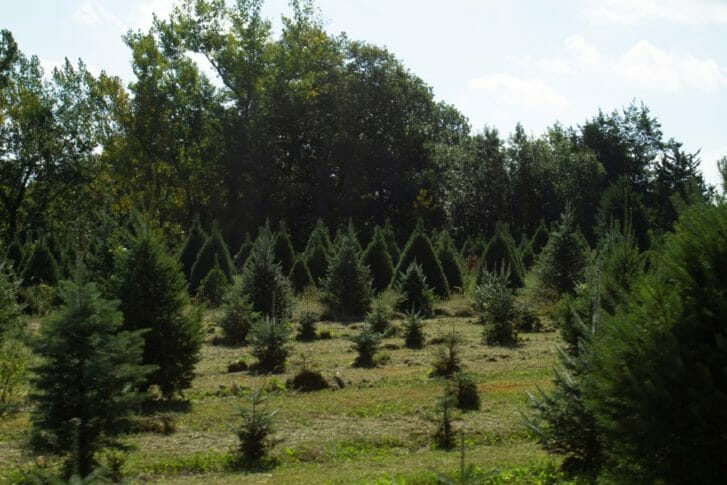 The farm includes four acres of Christmas trees, including pines and firs.

Ten acres of the farm are planted to a wide variety of pumpkins sold at the farm store, as you-pick, and to many of the local Hy-Vee and Fareway stores. Just next to the pumpkins is a large field currently used for parking overflow, which was planted to sweet corn on April 11 then later harvested and planted to cereal rye. Next year the two fields will switch; the current pumpkin patch will be sweet corn followed by cereal rye. The pumpkins are planted in late May or early June using only the 1st and 5th row of an 8-row MaxEmerge planter, then the 8th and 3rd rows on the way back. 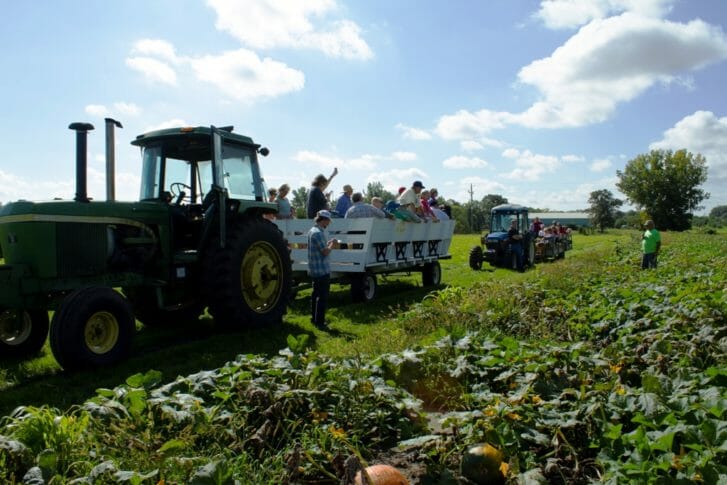 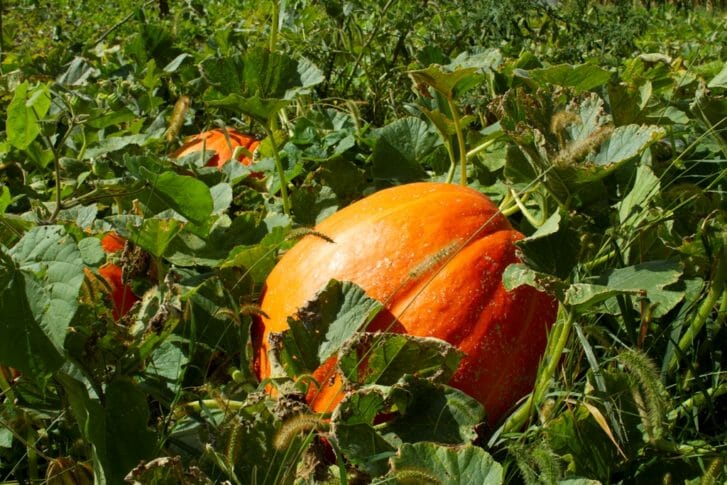 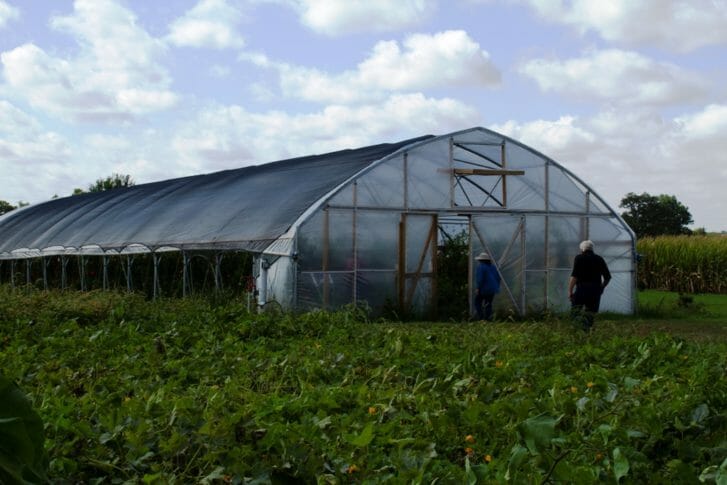 With a little time to spare before lunch we made a quick stop by the Deal’s new high tunnel, built during a Practical Farmers of Iowa workshop in the spring of 2017. Used entirely for tomato production, Chris and Benji talked about the season extension benefits and also a few of the growing pains they’ve experienced with managing tomatoes indoors. They use drip tape, plastic mulch, and two different trellising techniques to manage more than 200 plants in the 30′ x 96′ structure. 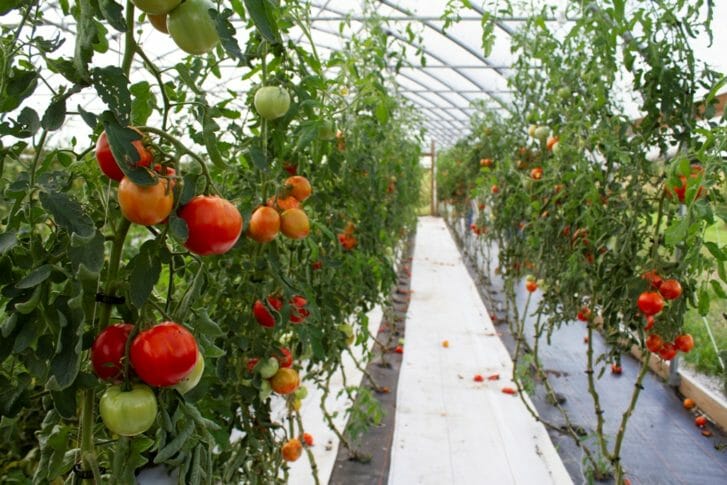 Scarlet Red and Jetstar tomatoes are still going strong in the high tunnel. 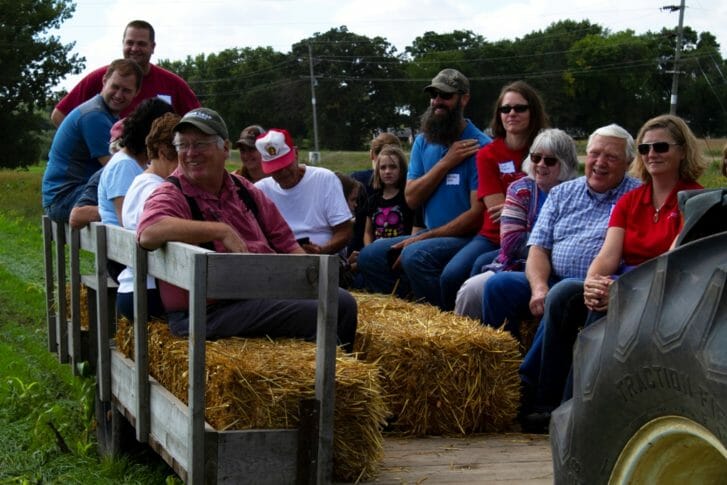 Benji, Chris and Jerald kept everyone entertained as they admitted their own mistakes—or mentioned each other’s. “You can either do it smart, or work harder,” Jerald said. “We work harder.” 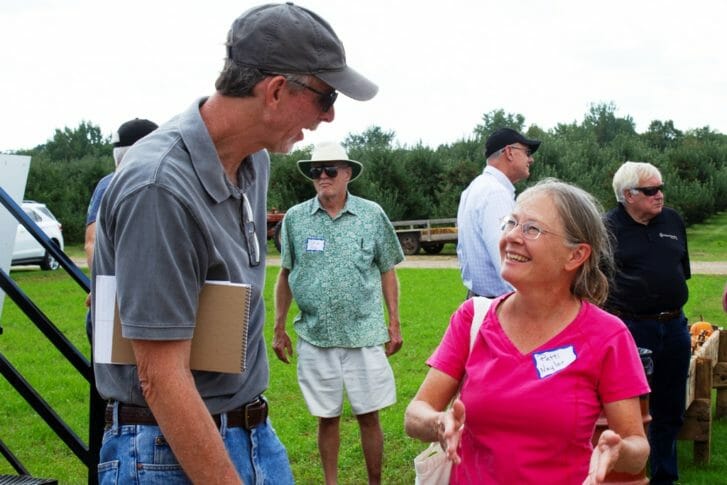 Maury Wills of Adel and Patti Naylor of Churdan chat after the farm tour.