On July 17, about 30 people gathered at the north-central Iowa farm of lifetime PFI members Kellie and A.J. Blair to learn how the Blairs are integrating cover crops, livestock, reduced tillage and on-farm research to increase their conservation and profitability.

Kellie and A.J. operate AKR Farm, Inc. near Dayton, farming with A.J.’s father, Kelly, and uncle, Don. They are the fourth generation to farm the land, and their two young children – Charlotte and Wyatt – represent the fifth generation on the farm.

The Blairs raise corn, soybeans, cover crops (primarily cereal rye, though they’ve planted some oats and vetch), cattle and pigs – and they recently added a new enterprise, raising their own cover crop seed. A.J. started farming in 2004, and Kellie joined the farm in 2007, after marrying A.J., at a time when cattle had been absent for two generations. 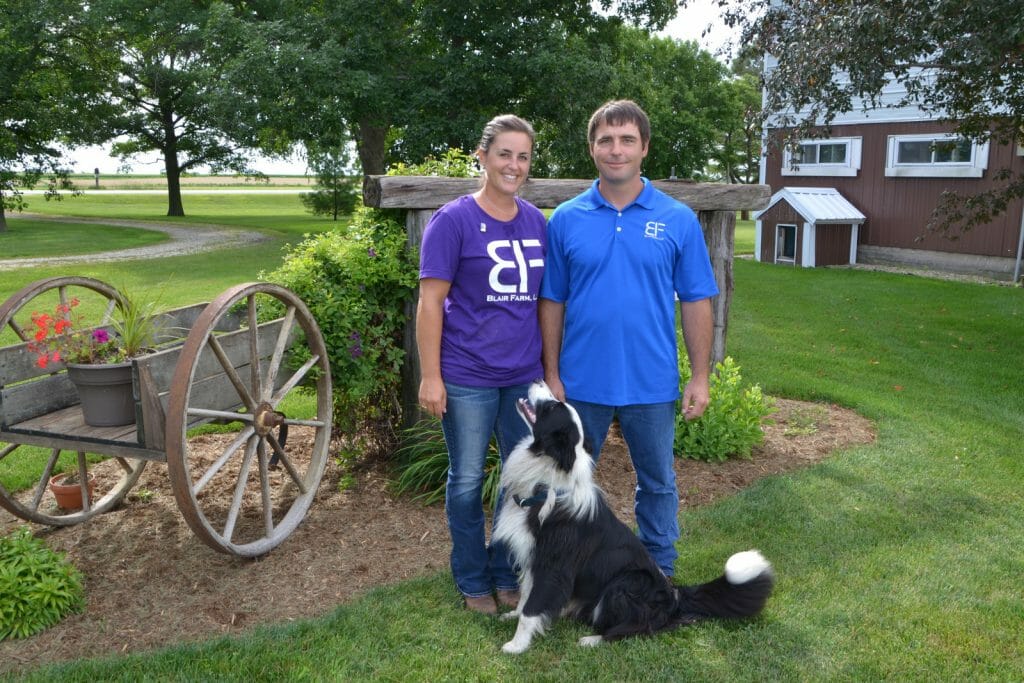 Being good stewards of their land is such a high priority for the family, it’s enshrined in their farm’s mission statement. The Blairs started experimenting with cover crops on a small scale about 10 years ago, but have steadily increased their cover crop acres each year. 2017 was the first year they harvested cover crop seed.

In 2010, as part of an effort to increase their on-farm conservation, Kellie and A.J. built a monoslope barn that can house 250 feeder cattle and established Blair Farm, LLC to encompass the cattle operation. They started by custom-feeding, then in 2013 added a cow-calf operation. Today, they have a herd of 60 cow-calf pairs and three bulls. Kellie and A.J. explained that cattle play an important role in the farm’s conservation practices.

Not only do the cattle close certain loops on the farm – they eat grain and forage raised on the farm, and cattle manure (along with hog manure) is used to fertilize crops – they integrate naturally with cover crops: the cattle graze the cover crop, which offsets other feed expenses, boosting the economic value of cover crops in the operation.

“It was a pretty easy fit to graze cattle on cover crops,” A.J. said. “We’ve chopped ryelage and fed it to cows, and planted sorghum-sudangrass behind [the ryelage] and fed that to cows.”

“Every year, we do a little bit more – but we started out small,” he added. “Cover crops work really well with the cattle operation – and, of course, we know about the soil and water quality benefits.”

In the field, guests got to see some of the Blairs’ replacement heifers that were grazing a sorghum-sudangrass cover crop. 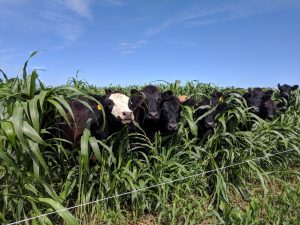 Simmental-Angus cows peer at the crowd through a thick stand of sorghum-sudangrass.

The animals are fenced in with single-strand electric fencing, powered by a solar charger, and moved every two to three days. A.J. described this system as being “super easy and cheap to move the cows around.”

For water, the Blairs gravity-feed water from mobile tanks into a tub, while minerals and salt are supplied in tubs in the grazing paddock. The water in the tanks is replenished with a 12-volt solar water pump, which draws from a county water main that A.J.’s dad had installed.

This setup – the portable electric fencing and solar-powered mobile water system – has let the Blairs easily graze the cattle on cover crop forage in fields that lack permanent fencing and watering systems. It’s also let them use their crop fields more months out of the year – one year, A.J. said they used this system to overwinter their cows in the field, and “it worked really well.” 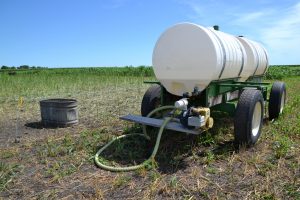 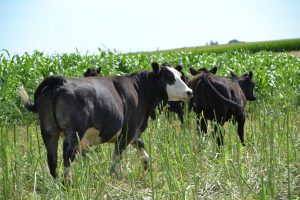 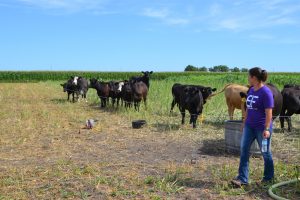 Curious cows come to check out the field day crowd. The replacement heifers are grazing a sorghum sudangrass cover crop.

In their early cover crop days, the Blairs started by aerially applying the cover crop. The advantage, A.J. explained, was they could get the cover crop on regardless of whether it was wet or dry.

“But we couldn’t always get the coverage we wanted,” he said. So they switched to using a Hagie highboy. This gave them better coverage, “but if it was wet, we couldn’t get the cover crop in.”

Two years ago, they rented a cover crop drill, and now they drill everything. “We see good growth in the spring and in the fall,” A.J. said.

The Blairs use cereal rye on their farm in a variety of ways, from planting it to harvest the seed, to letting their cattle graze it, to baling it and using as cattle forage (in addition to its soil and water conservation benefits).

During the field day, guests got to see a field where the rye had been baled earlier in the year and was covered with some of the rye residue. A.J. also pointed out another field of rye destined for cattle grazing: “That forest of rye will be gone in 48 hours,” he said. 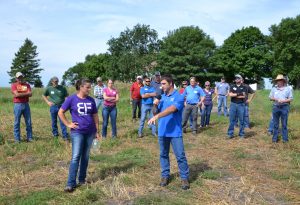 Kellie and A.J. Blair show field day guests a field they baled earlier in the year that had cereal rye growing. The yellow straw is the leftover cereal rye reside.

Some other details about their use and management of rye include:

“We really don’t have quantifiable measurements for what we need out there. We do 20-25 pounds per acre ahead of corn. Even for seed, there’s not a lot of information out there for rye, so it’s kind of a guessing game.”

“Rye is one of the most photosensitive crops,” he said. “When we got hot days in June, it put a stop to growth . . . . If we’d got more growth this year, I think the weed control would be even better.” A.J. added that another benefit of using rye for weed control is that it breaks the chemical cycle. “It gives a year off of [contributing to] chemical resistance – I like that.” 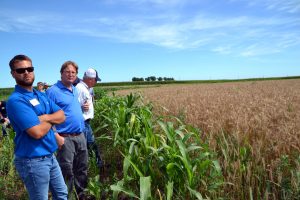 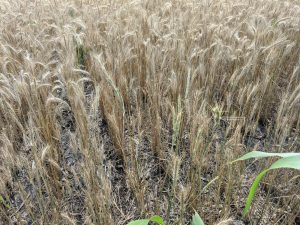 Close-up of the VNS rye, showing the mixed levels of crop maturity.

Kellie and A.J. have been no-tilling their soybeans for 10-15 years. The past few years, they’ve been using a no-till drill. The switch from tillage in their beans came when they realized they were losing a valuable source of livestock feed and bedding by tilling residue into the ground. At the time, they just had pigs – but realizing they could use their fields more efficiently was one of the factors in their decision to add cattle back to the farm.

A.J. explained that no-tilling their beans has given them more flexibility during planting season. He and Kellie have also seen a noticeable difference in the soil structure of their no-tilled fields.

“With no-till, you have more days to get into the field, because you can get in when it’s wet,” A.J. said. “Timeliness translates into yield too. And the improved structure of the soil contributes to yield. We have about 10 worms per square foot. In a lot spots where there’s residue, you kick that away and there’s a worm scurrying around.“

He also said he thinks “rye was sort of the missing piece for no-till. I’d never seen the soil structure before. Normally, if you’d go through [the field] in water, you’d smear the soil. But those rye root balls are holding the soil structure together.”

His advice to someone trying no-till in beans for the first time? Just get out there and do it. “Nobody has research to show there’s a yield loss to no-tilling beans,” A.J. said.

No-tilling corn: In the past few years, the Blairs have started experimenting with no-tilling some of their corn acres. This year, they no-till a third of their corn acres. “Today, you couldn’t point that corn out, so we got lucky this year,” A.J. said. “We changed our nitrogen protocol and added more up-front, plus starter.”

They also do strip-tillage on some of their acres, and will evaluate how this compares to their no-tilled corn. 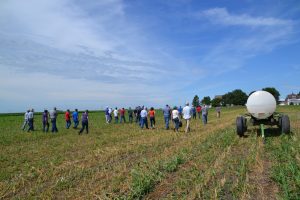 Guests walk back to the shed through through the rye field that was baled earlier in the year, and past the mobile water tank used for the cows.

The program portion of the field day ended back at the shed with a discussion of some of the Blairs’ on-farm research projects. They are big proponents of using science and data to help them continually improve their operation.

Where they have cover crops planted, they said they have found lower levels of nitrates coming from the tile lines in the study. “Cover crops may be expensive and hard,” Kellie said. “But we have a responsibility to try to bring those nitrate levels down.” 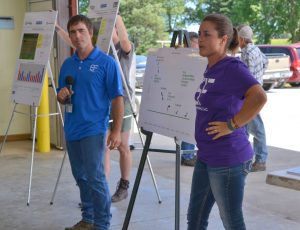 Kellie and A.J. Blair discuss some of their on farm research results.

Scott Nelson, director of ISA’s On-Farm Network, spoke about the value of on-farm research, the importance of replication for high-quality results and how to plan a trial. Stefan Gailans, PFI’s field crops and research director, ended the day by sharing some background about the Cooperators’ Program and highlighted some current projects related to the field day topics.

Thank you to the Blair family for hosting this event, and to Bio Till, Iowa Agriculture Water Alliance and Iowa Farmers Union for sponsoring! 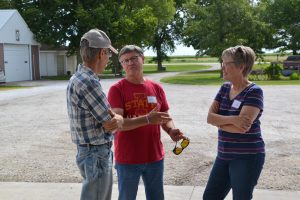 Kelly Blair, A.J.’s father, speaks with PFI members Larry and Ruth Neppl. The Neppls have been PFI members since 1988, knew A.J. as a boy and are renting some land to Kellie and A.J. 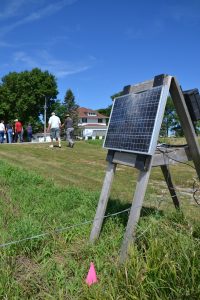 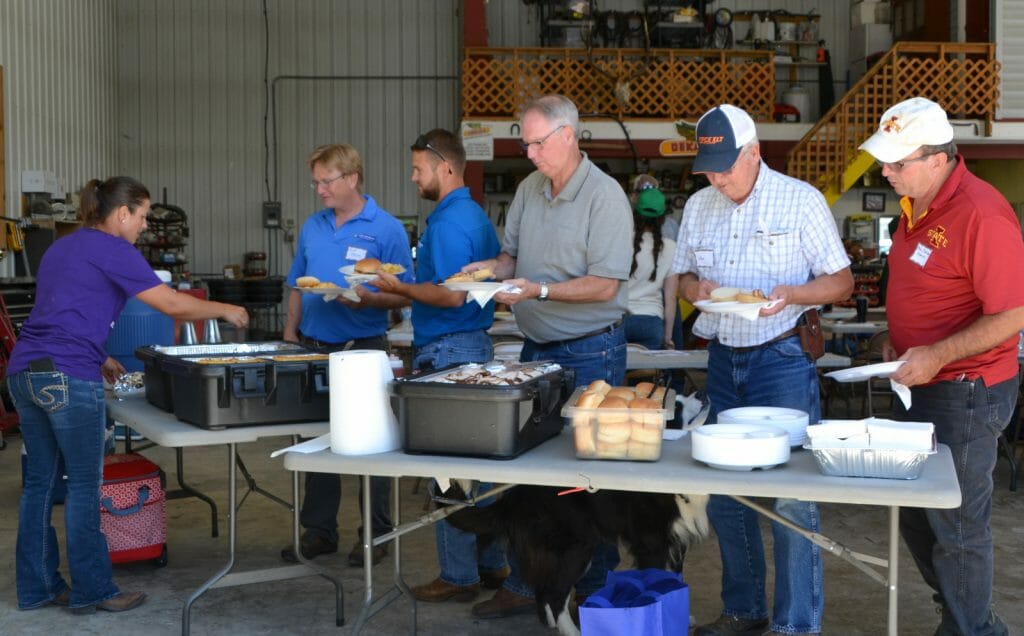