Wheat can be used as the sole cereal grain in grow-finish pig diets. While wheat is an expensive feed grain in cash grain markets in the Corn Belt, it can have a beneficial role in an integrated crop-livestock system when fed on or near the farm.

Pigs fed wheat-based diets can grow as efficiently – and with similar meat quality – as pigs fed corn-based diets when energy and amino acids are balanced. In addition, farmers who feed wheat can save on feed costs because wheat’s high nutritional content lessens the need to feed ingredients such as synthetic lysine and phosphorous. 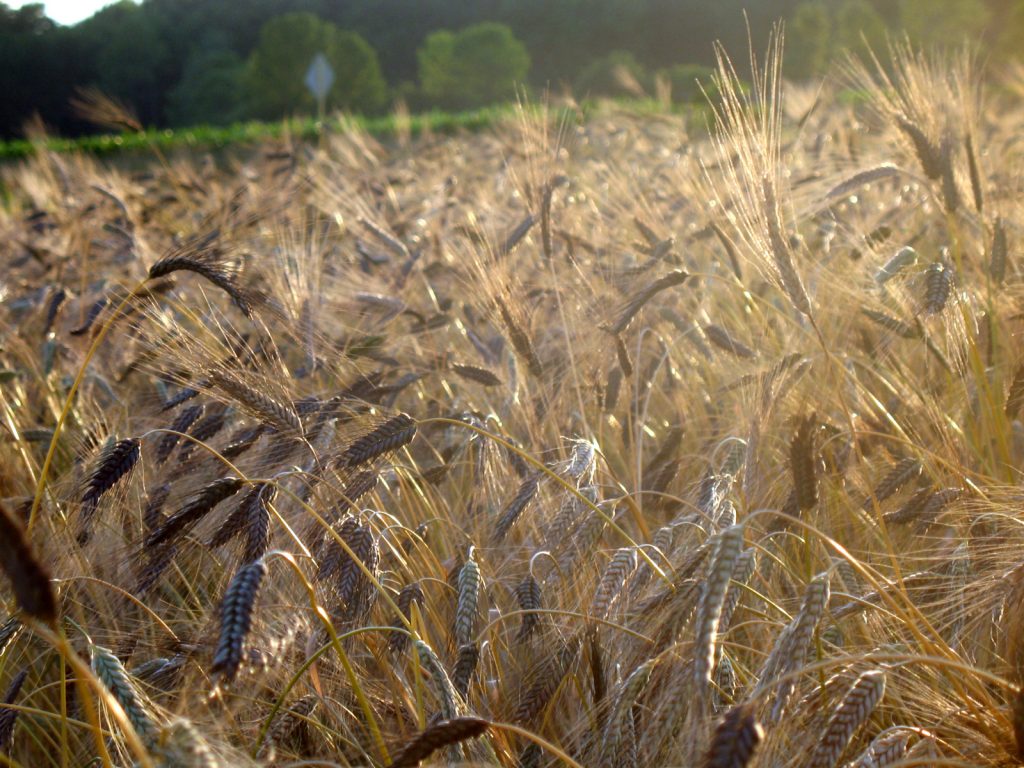 “Making these kinds of substitutions and if you can buy wheat for the same price of corn, that’s where you are saving money” – Dr. Terry Coffey, chief of science and technology for Smithfield Food Inc.

Paul and Nancy Ackley, who farm near Bedford, have been growing small grains like winter wheat for many years, integrating wheat into their field crop rotations. Paul, along with Kristy and Bob Walker of Iowa City, shared advice about growing winter wheat during a PFI farminar in November titled Where to Begin With Winter Wheat Production. During the farminar, Paul discusses why he began to grow winter wheat and shares advice with the Walkers on how to start integrating wheat into their diversified farm operation.

In North Carolina and surrounding states, where corn is in short supply, wheat is commonly used as an alternative feed grain. “There are times where we have feed bins with 100 percent wheat due to the limit of corn in our area,” says Dr. Terry Coffey, chief of science and technology for Smithfield Food Inc., which is based in North Carolina. Due to this shortage, he says the company is committed to using wheat as an alternative feed grain. “Wheat is a great feed for pigs. It is just a matter of balancing the economics of the value of the grain.”

Compared to corn, wheat has a lower energy content. Both soft and hard red winter wheat contain more crude protein, lysine and phosphorus, and the latter is also more bioavailable to pigs than corn.

Although wheat contains more protein and lysine than corn, the balance of amino acids in wheat is rather poor. This means that pig diets formulated with wheat should be balanced on a lysine basis, rather than a crude protein basis.

“With the nutrient content of wheat, you’ll find that you won’t need as much synthetic lysine because the amount of available lysine is higher in wheat than in corn,” Terry says, “You won’t use quite as much as your phosphate source, because the content of more available phosphorus is there as well. That is where the value proposition lies.”

Terry adds that depending on the price of soybean meal, which can be a protein source for pigs, wheat can be a more cost-effective way to balance a pig’s lysine needs. Because wheat has more lysine in it than corn, “wheat is going to be worth 102-106% the feeding value of corn pound for pound.”

Wheat can replace corn entirely in pig rations across all production phases – keeping in mind to balance for lysine and protein. Experts recommend that wheat occupy no more than 90 percent of gestating sow rations and no more than 95 percent for grow-finish rations

“Smithfield is not afraid to use it in any stage of production,” Terry says, “Be cautious about feeding lactating sows, to make sure they do not get off feed due to a new ingredient.” He says that with gestating sows, it is important to remember that adding even 20 percent wheat to the ration can change the bulk density of the sow’s diet. “It would be primary to use wheat in the grow-finishing phase more than other phases of production,” he says.

How Much Should You Pay for Wheat? 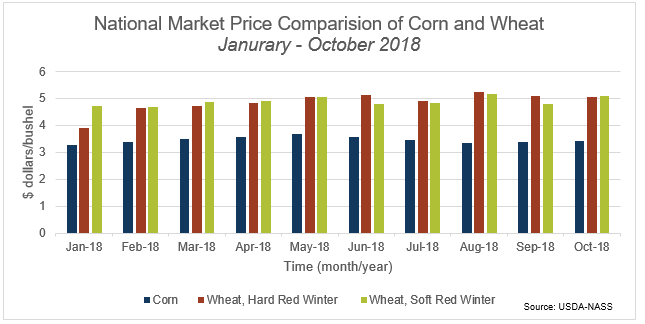 When you look at the tables 1 and 2, you’ll see that rations with wheat are more expensive than rations without. However, when planted in rotation with corn and soybean, wheat keeps a living cover to help protect soil and water quality. Along with these environmental benefits, growing wheat in corn-soybean rotations can reduce other costs, such as input costs, and improve yields of the cash crops.

Feeding wheat in rations entirely or with moderate inclusions can also lower feed costs. Terry notes that including 10 percent wheat in your ration means less lysine and phosphorus is needed. “These lower amounts of ingredients contribute to the math that can save you money,” he says. “If you can grow your feed economically, wheat planted right after corn gives you a positive feed value by rotating crops on the land. Once the math of crop production works, then the feeding part is easy – wheat makes an excellent feed for pigs.”

Using the Wheat Price Estimator, developed by Beob Kim and Hans Stein at the University of Illinois Urbana- Champaign, is another way to assess and calculate the cost of replacing corn with wheat in swine diets. 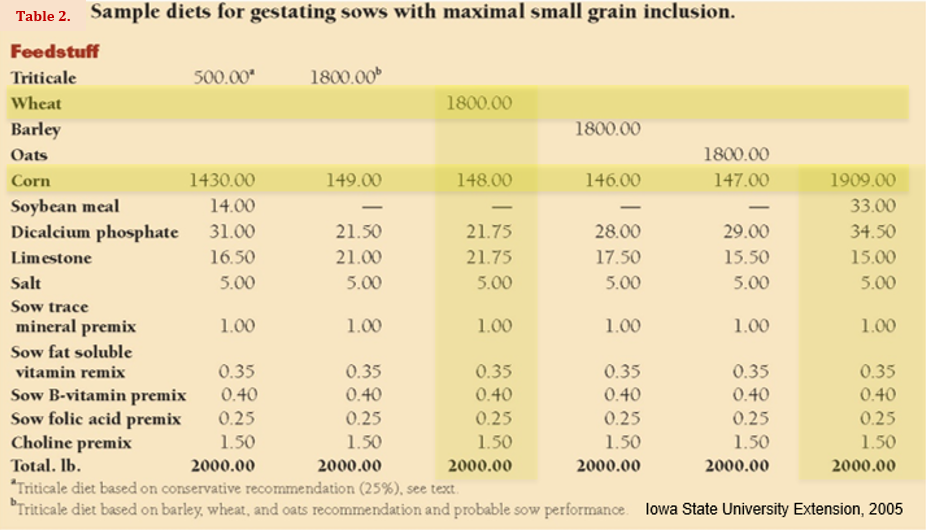 Table 2 highlights gestating sow rations with and without the inclusion of wheat. From the two rations compared, the relative cost of corn and wheat based on current market prices are shown below.

If you are searching for additional businesses that sell, buy and clean small grains in Iowa and the Midwest, check out our Small Grains Business Directory for more information.

Where to Begin With Winter Wheat Production