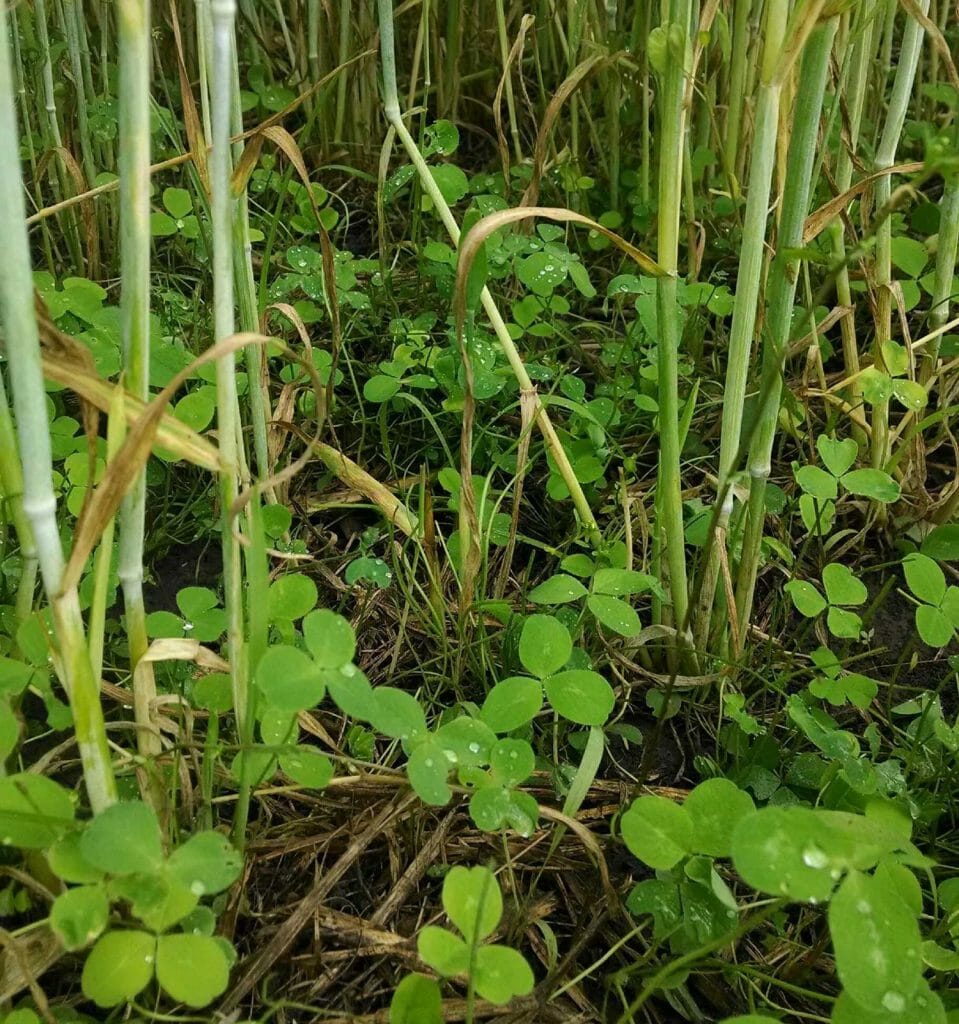 An underseeding of clover with rye (pictured) or co-seeding of oats and alfalfa is one option for establishing a cover crop in the small grain year that allows for maximum nitrogen production because the clover or alfalfa is ready to take off immediately after the small grain is harvested. With an underseeding it’s best to remove straw to allow light to reach the legume below.

Practical Farmers of Iowa was founded by farmers in the 1980s farm crisis who were looking for ways to reduce their inputs, bring down their annual operating costs and make it through the lean season until land and crop prices came back into balance. Back then, they investigated extended rotations that included legumes as a way to grow nitrogen instead of purchasing fertilizer inputs, and that lesson is more applicable than ever into today’s agricultural economy.

Legumes tend to have more expensive seed and don’t fix much nitrogen until the plant flowers – usually impossible in the short and cold time between corn and soybean harvest and planting. But, farmers who harvest a small grain in July have a unique opportunity to use legume cover crops that will actually have time to produce nitrogen. Farmers looking at their options for a legume cover crop have two main options a) seed a clover or alfalfa cover crop in the early spring so it is growing at the same time as the small grain or b) wait until August after small grain harvest and plant a cover crop then.

Daryl DeGroot, who farms near Hull in northwest Iowa, decided to test out a one-year cover crop of alfalfa co-seeded with his oats in 2017. “We drilled 16 pounds per acre of alfalfa with the oats,” Daryl says. “Usually alfalfa is pretty expensive, but we had the opportunity to buy an older variety from our dealer that was cheaper than red clover.” Daryl farms row crops and has a 250-cow dairy herd, so he’s no stranger to growing alfalfa as a crop, but this was the first year he essentially used it as a cover crop – he allowed the alfalfa to grow for only a single year before terminating it and planting corn the next year. 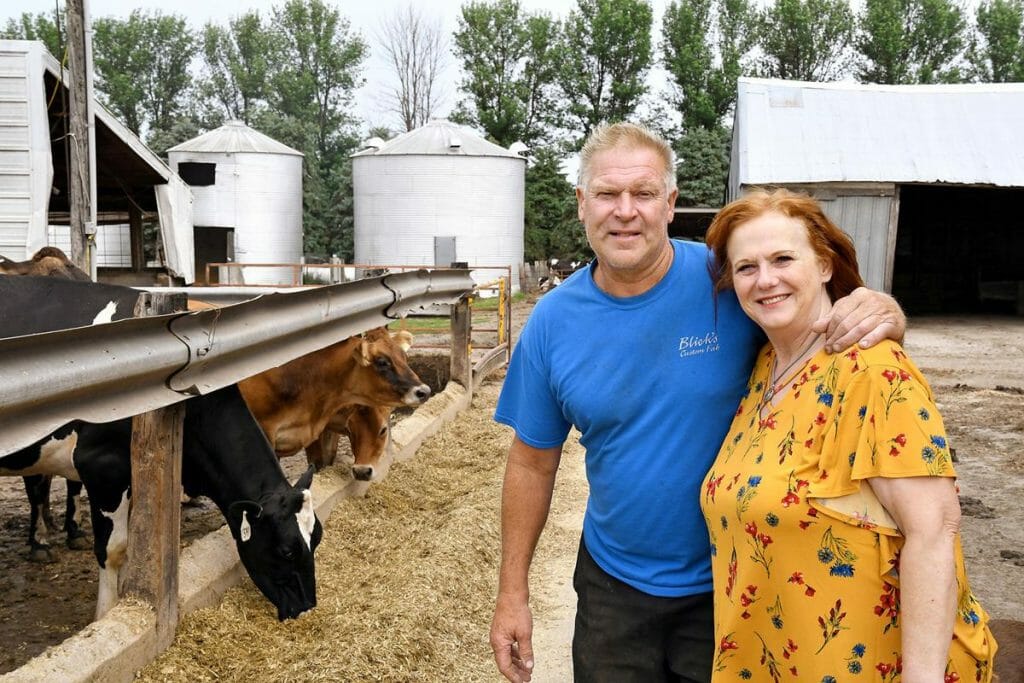 PHOTO CREDIT: The N’West Iowa REVIEW. Daryl and Marla De Groot raise row crops and operate a dairy outside of Hull, in far Northwest Iowa. Daryl relies on manure and alfalfa to provide sufficient nitrogen for his corn in three and four year crop rotations.

After he harvested his oats in July of 2017, Daryl harvested square bales of straw according to his usual practice. “It helps the alfalfa get uncovered so that it can grow,” he says. Later that fall, he took a forage cutting off the alfalfa – about two tons – and then injected manure into the field. “The field is right next to a farrowing hog facility so we spread a lot of manure out there from that,” Daryl says. Because it’s a farrowing facility, there isn’t a lot of nitrogen in the manure: they have it tested periodically and it’s about 11 pounds of nitrogen per 1,000 gallons out of that lagoon. In fall of 2017 they applied 14,000 gallons of the manure to the field and figured that gave them about 140 pounds of nitrogen. “We injected the manure right into the alfalfa,” he says. “You could see where it went, but the alfalfa didn’t get disturbed too much.”

After the hay cutting and the manure application, the alfalfa still had a little time to grow left in the fall. Daryl figured it grew 4-5 inches that fall after the manure application and then another 4-5 inches in the spring so it was just shy of a foot tall when he terminated it with Roundup. “It was a really old, cheap alfalfa variety so it was not Roundup Ready,” he says. “We were able to terminate it completely with a pass of Roundup and Surestart 10 days before we planted corn.”

After the alfalfa was terminated, Daryl planted right into the residue with the same settings he uses to plant into a rye cover crop. “We fill the 400-gallon water tank that’s meant for starter fertilizer with water to get down pressure,” he says. “I run one rubber and one spiked closing wheel with trash whippers.”

Daryl’s nitrogen plan for his corn came entirely from the manure he applied and the nitrogen he estimated from his alfalfa. “Quite often we’ll do a spring nitrate test, but we didn’t get it done in spring of 2018 because the weather was so poor,” he says, “so we’re not exactly sure what nitrogen came from alfalfa. Usually I figure that if it’s a two-, three- or four-year alfalfa I’ve got all the nitrogen I need for a corn crop. From the one year, I figured I had half of a usual nitrogen program – 80 lbs/ac or so.”

At harvest, it was time to see if this one-year alfalfa experiment worked. Although he harvested 235 bushels per acre of corn, Daryl cautions, “I have years of history applying manure on this field.” Farmers just starting out in a three-year rotation or who don’t have manure in their system should do more testing of both manure and spring soils so they can make informed decisions about how much nitrogen is needed for the corn crop. 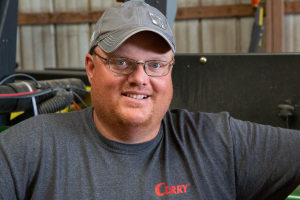 Jeremy and Kelly Gustafson farm near Boone in central Iowa and have experimented with planting a diverse summer cover after an oat crop to provide pollinator habitat and sequester nitrogen for the corn in the following year of the rotation.

Later that fall when the cover crop was thriving, Jeremy applied hog manure. “We have our own manure tank mounted onto strip-till units,” he says. “We get manure sampled every time we put it on, so we have a pretty good grasp of what the manure content is. It varies even from building to building. On this field, we applied manure with a nutritional content N-P-K of 20-20-30 per 1,000 gallons. We’ve found that lowering the gallonage and covering more acres gets better long-term outcomes with manure breaking down gradually over time and releasing more nutrients year to year.”  Gustafson estimates that there was 60 pounds of nitrogen in the application to this field.

In the spring, Jeremy cultivated the field to work in the cover crop residue and then planted corn with his normal herbicide program. “Since it was winterkill,” he says, “we didn’t do anything different with the planter.” He also took a pre-sidedress nitrate test to measure the nitrate available in his soil, and took that into consideration along with his historical knowledge of performance on that field. The test showed that he had about 30 pounds of nitrogen per acre available in the soil already, so he top-dressed only 70 additional pounds of nitrogen with Y drops in June. Together, 30 pounds of nitrogen from the cover crop, 60 pounds from the hog manure and 70 pounds of nitrogen from liquid 32 percent made up his total nitrogen program of 160 pounds per acre.

A summer cover crop mix can meet a variety of different goals. Not only do legumes fix nitrogen, they flower and provide pollinator habitat. As this was one of Jeremy Gustafson’s goals, he used sunflowers in the mix in addition to legumes and grasses.

In 2018, Jeremy’s corn grown in this extended-rotation field yielded 210 bushels per acre with 130 pounds of applied nitrogen – only 70 of which came from a purchased fertilizer product. So, he was able to meet his goals of adding more diversity into his fields, increase pollinator habitat and save some money on fertilizer at the same time. Both Jeremy and Daryl stress the importance of testing in order to make confident decisions regarding their nitrogen programs, particularly as they are just starting out with trying these cropping systems and don’t have a lot of historical knowledge about how they’ll behave on their farms. Soil and manure tests allow them to make informed decisions to cut their purchased fertilizer inputs while maintaining competitive corn yields for their areas.

This article is based on PFI’s March small grains “shared learning call.” Each month, PFI invites farmers, researchers, and/or industry professionals to share tips and findings on small grains production. Farmers from across Iowa and the Midwest call in to listen along and ask questions. For more information about joining these calls, contact Alisha Bower, PFI strategic initiatives manager at alisha@practicalfarmers.org or 515-232-5661.