Small grains offer a range of benefits to livestock, farmers and the landscape

Farmers have to remain productive and competitive in the marketplace while sustaining their natural resources. This requires them to adapt – and one way farmers have adapted is by using cover crops in their corn and soybean rotations.

Cover crops help to control erosion, bind up free nutrients and suppress weeds. Small grains are commonly planted as a cover crop – but when grown to full maturity for grain, they can unlock additional environmental and economic benefits. When grown as a third crop in rotation with corn and soybeans, for instance, small grains help to build organic matter, break up compaction and produce biological nitrogen. They can be grown as feed grain, silage, or straw – options that provide economic and risk management benefits. 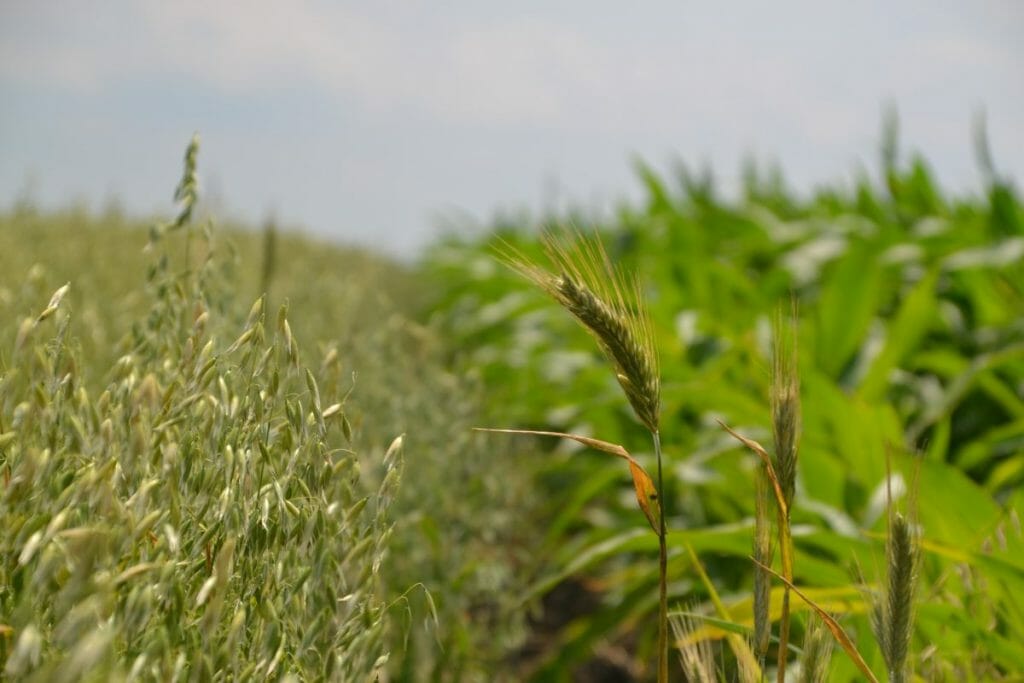 Oats, on the left, and rye, on the right, are two types of small grains that can be used in place of corn in livestock feed rations. As with all cereal grains, however, it’s important to know the nutritional profiles.

Nutritionally, small grains are similar to corn, with a few differences. Small grains are higher in crude protein than corn and have a higher lysine content – a limiting amino acid essential in swine diets. Because of this, replacing corn with small grains in rations can lower feed costs because farmers can feed less of other ingredients like soybean meal, lysine and phosphorous. It’s important to note that ruminants and monogastrics digest grain and forages differently due to their intestinal tract makeup. So how do various small-grains species compare to corn?

Ron Rosmann, of Harlan, feeds barley, oats, wheat and triticale, in combination with field peas – a mix called succotash – mainly to his pigs. “Field peas have 22-23% protein and barley is [nutritionally] equivalent to corn,” Ron says, “so there is no need to add any soybean meal to succotash.” 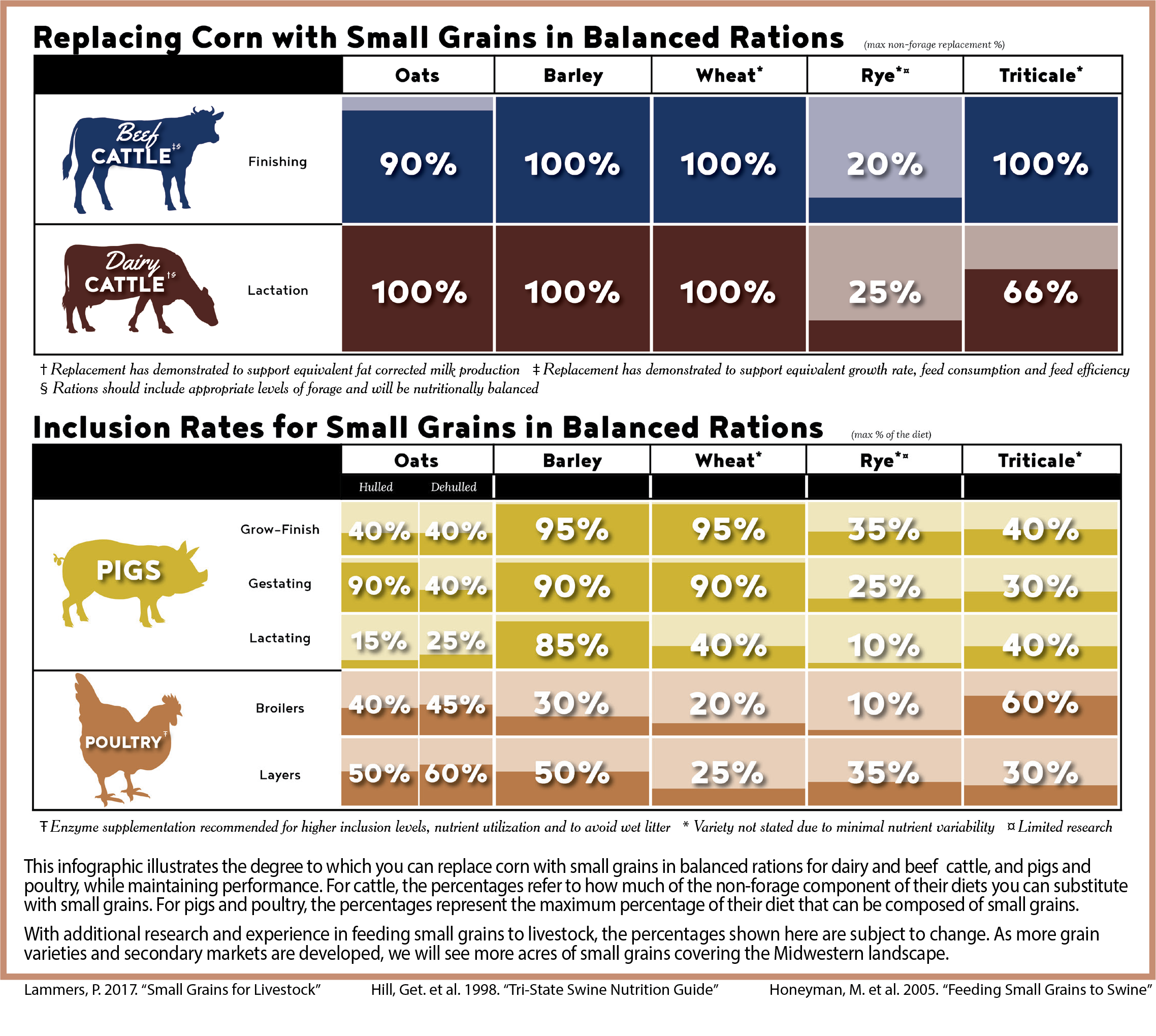 Ruminant animals like cattle, sheep and goats digest grains and other concentrates in their rumen through microbial fermentation. The digestibility of grain can be improved by mechanical processing such as rolling or coarsely grinding to break the seed coat. Small grains also tend to be low in some minerals, especially calcium, and tend to have low vitamin A activity. Thus, it’s important to supplement vitamins and minerals to ensure a balanced ration. “There is no magic secret,” says Dr. Pete Lammers, an animal nutritionist at the University of Wisconsin-Platteville. “We can feed oats, barley, wheat and triticale to beef cattle and they will perform just as we would expect them to perform on corn grain – as long as we balance the ration.”

Compared to cattle, monogastric animals like pigs and poultry digest fiber inefficiently – but pigs digest fiber better than poultry. When adjusting feed rations for swine, the main concern is the lysine content because lysine is the first limiting amino acid in pig grain-based diets. In a report on feeding small grains to swine, Iowa State University Extension and Outreach noted that small grains contain 30-50% more lysine than corn, which also reduces the need for soybeans in the diet as well. Feeding oats to pigs can also be a natural way of controlling parasites, according to Jeff Mattocks, feed nutritionist with The Fertrell Company. Speaking at PFI’s 2017 annual conference, he said: “Due to the sharp fiber, the hull of the oat passes through the digestive tract causing a natural irritation to the parasites that build up in the digestive tract.”

When dealing with poultry diets, it’s important to remember that poultry can’t handle the same level of small grains in their diets as pigs. Small grains also reduce the availability of energy and other nutrients. To increase small-grain inclusion rates, nutritionists recommend supplementing poultry small-grain diets with enzymes like xylanase and beta-glucanase.

Is the Price Right?

Terry Coffey, chief of science and technology for Smithfield Food Inc. in North Carolina, says the company is committed to using wheat as an alternative feed grain – especially when corn is in short supply. “If you can grow your feed economically, wheat planted right after corn gives you a positive feed value by rotating crops on the land,” he says. “Once the math of crop production works, then the feeding part is easy.”

Proper grain testing and nutrient analysis are key to getting the most benefit out of adding small grains to livestock feed. Growing and harvesting conditions can influence the nutritional composition of small grains even within the same variety – which means it’s important to get feed tested every year. While it’s impossible to prevent all problems, certain measures will greatly reduce the chance of serious effects. Consider testing grains for mycotoxins when weather conditions are right for the fungus to develop, or when many of your animals are showing signs of performance and health issues. If feeding ruminants, sample total mixed ration ingredients; if feeding monogastrics, sample grain mixtures. Samples can be sent to Dairyland Laboratories in Wisconsin.

Rye has a mixed reputation due to its susceptibility to ergot, a mycotoxin that affects livestock health and performance. To combat ergot, new varieties like hybrid rye have been developed with traits that make it less susceptible to ergot toxins.