For the Zellmer family, scouting fields is an integral facet of management

Integrated pest management emphasizes employing a diverse set of strategies to mitigate risks based on observations from the field. But as chores go, crop scouting is easier said than done. In theory, it’s simple to walk your fields, assess what’s happening and make adjustments based on what you see. But as farms get bigger, it has become a challenge to keep tabs on what’s going on across an entire farm.

When making management decisions, farmers often have no choice but to rely on hired scouts or data provided by the technology that’s part of every new piece of farming equipment. In the modern farm economy, walking the fields can almost seem old-fashioned. But for some farmers, scouting is an integral part of a multifaceted approach to monitoring fields. These farmers are also finding that taking a proactive, rather than reactive, approach to pest management can pay big dividends. 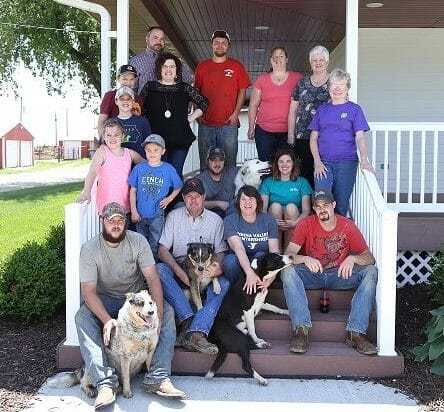 The Zellmer family. Alan is in the front row, second from left, holding a dog in his lap.

Factors that influence a farmer’s approach to pest management include farm size, location and individual differences in personality or management style. If a farm is very large or spread across several counties, doing spot checks in every field might be daunting or impractical; these farmers often hire a crop consultant to do their scouting for them. Other farmers rely on the farmer network. They listen to the talk at the coffeeshop or wait until they see neighbors out flying a plane and follow suit. Some farmers lean on personal experience. They’ve had good results and thus go with “the usual,” applying the same inputs every year based on the calendar or plant stage.

Other farmers take a more hands-on approach, opting to scout their own fields. These farmers stay attuned to pest activity by closely monitoring insects, weeds and pathogens. Alison Robertson, Iowa State University extension field pathologist, encourages farmers to adopt this more hands-on management style. “I like to say that in those years where you don’t need to spray, you could take your family on a vacation to the Caribbean in the middle of February,” Alison says. “Wouldn’t that have been nice this past winter?”

PFI member Alan Zellmer raises field crops and cattle on his fifth-generation family farm in southwest Iowa. He says he makes a point to visit every field every seven days, and not just when crops are growing. “Scouting eliminates a lot of surprises, and I think that’s very important,” Alan says. “I’m on offense, not on defense. Just a year ago, we hired a drill operator and he left me ‘rabbit runs.’ We fought those strips being weedy all summer long. That proved two things: Not only does the rye cover crop cut back on how much herbicide we have to spray in the first place but, it also emphasized just how important it is to get out there and see what’s going on. That way you can tackle the problem head-on.”

“Scouting eliminates a lot of surprises, and I think that’s very important. I’m on offense, not on defense.” 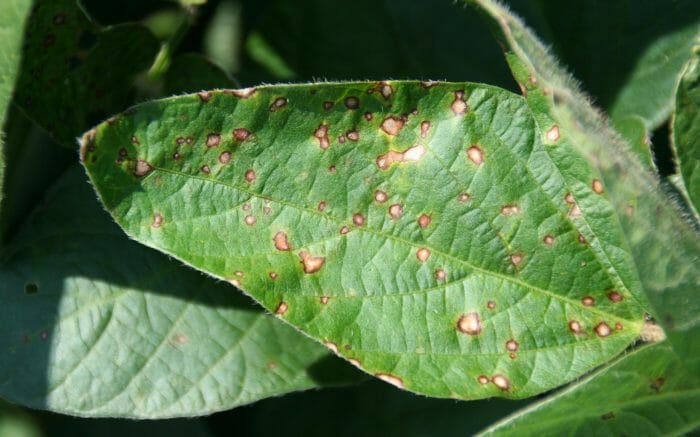 In 2018, there was a huge outbreak of frogeye leaf spot across the western half of Iowa and it caused some yield damage. The people who scouted their fields noticed it and sprayed a foliar fungicide. Photo courtesy of Daren Mueller, assistant professor and extension plant pathologist at Iowa State University.

Scouting won’t always reduce the number of inputs, but by applying the right tool for the job at the right time, farmers can get more bang for their buck. Erin Hodgson, ISU extension entomologist, recommends getting into every field every seven to 10 days. “Some insect pests, like aphids, can have exponential growth, doubling populations every two or three days,” she says. “Waiting a month is going to be too late in many cases.” Similarly, a single waterhemp plant can produce up to 250,000 seeds. With potentially hundreds of plants growing in fields, weed pressure left unchecked can spell big problems. Correctly identifying pests in the field is critical for selecting the correct tools to economically manage the issue.

There’s no silver bullet that will give you a pest-free farm, but experts and farmers agree that diversifying your rotation is the single most effective cultural practice to reduce pest pressure. “Most of the pathogens we’re dealing with are surviving on residue,” Alison says. “In a corn-soy rotation, the disease is more likely along the border where a corn-on-soy field meets a soy-on-corn field, and once it’s there, it spreads.”

Erin adds: “A lot of pests aren’t mobile, they’re host-specific. If that crop isn’t present in the field, it’s a death sentence.” For Alan, adding cover crops to his corn and soybeans not only reduces disease pressure, it has a direct effect on his bottom line. Alan hires an air seeder to get rye on early into standing corn and then no-tills beans into that cornstalk-rye mix the following spring. “We call them ‘rye beans’,” he says. “For the last six or seven years, they’ve dramatically outproduced our conventional beans. I can’t believe it sometimes.” 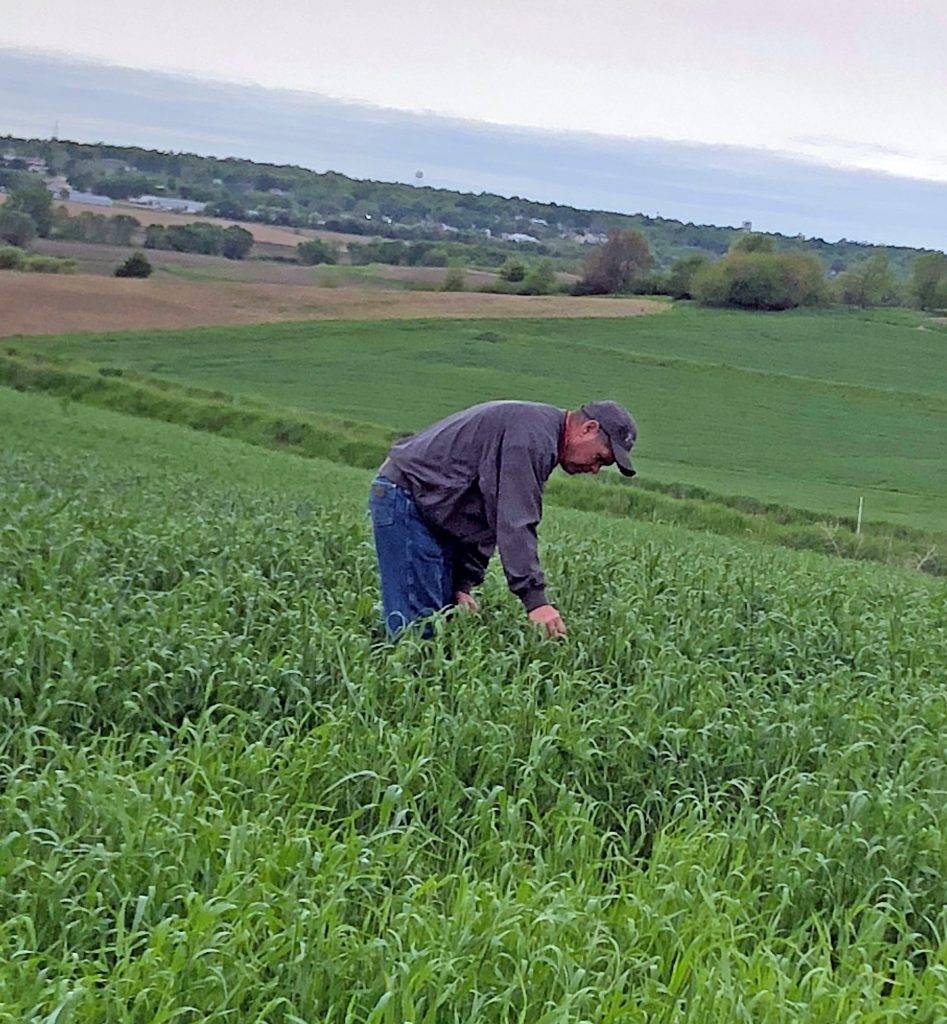 Many farmers like to scout from the road – but Alison says this is a common mistake that can lead to the unnecessary application of inputs. “It’s important to walk in from the edge where many pests and diseases – like gray leaf spot or northern corn leaf blight – thrive because there’s more light or more grasses,” she says. “You might end up treating 160 acres for a problem that’s only on the outside edge. Avoiding that requires walking to several different locations within that field. For example, if the field slopes, go to the bottom and compare it to the top. Different things will be going on in the high and low ground.”

To get a representative sample of what’s going on in your field, Alan suggests walking in a W shape or a zigzag pattern. “I take random routes across the farm and across the field on an ATV,” he says. “I use my smartphone to take pictures and if there are any issues, I share them immediately.”

Smartphones, social media and other technological advancements make scouting today easier than it’s been in the past. Alison notes that state crop pathologists are using social media as a way to crowdsource data and rapidly share information. “They’re particularly fond of Twitter,” she says. “Farmers can tweet pictures of what they’re seeing and what county they’re in to @corndisease and @soybeandisease, and the date is embedded. When you see that someone in the county next to yours is starting to see leaf spot, you are more likely to head out and scout for it in your own fields.”

Alison adds: “Even without a researcher’s knowledge of the diseases most likely to affect corn in V5 or V6, for example, you can use social media to help you narrow down what you’re looking for, which makes it easier to find.”

“Most of the pathogens we’re dealing with are surviving on residue. In a corn-soy rotation, the disease is more likely along the border where a corn-on-soy field meets a soy-on-corn field, and from there it spreads.” – Alison Robertson

Alan is also exploring the use of drone technology to assess his fields in the present and make projections about the future. “My son has a drone and we’re starting to venture into that field,” he says. “We’re not experts, but we can use what we see to assess weed pressure and also estimate yields and tonnage. If our crop is falling short, at least we know ahead of time and can plan to chop corn.”

Using IPM to Learn and Adapt

So how can scouting today lead to a healthier bottom line tomorrow? It’s the cumulative learning process and how that affects your decision-making, Alison says. “Once you get familiar with your field and are aware of the problems, you can make better management decisions not just this year, but in future years,” she says. “For example, say you have a gray leaf problem. This year, that might mean spraying a fungicide, but next year that might mean choosing a resistant variety so that you no longer need a fungicide.”

“At times, we get overloaded with data. One field may receive a considerable amount of green snap and the field right next to it has no difference,” Alan says. “Then it’s time to circle the wagons. The combined knowledge of my family, the farmer network, my reps and consultants, and my own experience are how I determine the best path forward. Are there going to be failures? Absolutely. But they won’t strike twice.”