In 2017, PFI began a research partnership with Alison Robertson and her lab team at Iowa State University. Alison is a professor of plant pathology at ISU studying the effects of cover crops on corn seedling disease. The team had recently published a study, led by Jyotsna Acharya, that showed corn yields decreased as the gap between cover crop termination and corn planting narrowed.

The team used cereal rye as the cover crop in their study. When they terminated the cover crop at least 10 days before planting corn, they saw no difference in yield compared to the no-cover check. But when they terminated the cover crop closer to the time of planting corn, the number of corn plants at harvest time was significantly reduced, which in turn reduced grain yields. The culprit turned out to be corn seedling disease: When the researchers killed the cereal rye closer to when they were ready to plant corn, the frequency of seedling diseases went up. “Cover crops may act as a ‘green bridge’,” Jyotsna writes in the study. That’s because cereal rye can harbor soil pathogens that also affect corn seedlings. By contrast, widening the time interval between terminating the cover crop and planting corn significantly reduced disease pressure on corn seedlings in the study.

“We think these findings reinforce the recommended practice of terminating a cereal rye cover crop at least 10-14 days before planting corn,” Alison says. After Alison presented her team’s findings at the 2017 Cooperators’ Meeting, exploring the subject further on farms became a priority of both the ISU team and Practical Farmers members. Cooperators tested cover crop management practices that could better ensure success on their own farms and serve as examples of strategies for other farmers to consider.

One on-farm research project involved seeding a cereal rye cover crop such that no cover crop would be growing in the eventual corn row. Some farmers created these no-cover-crop skip zones by using planters they’d normally use to plant corn or soybeans to seed cover crops in 15- or 30-inch row-widths. Other farmers plugged openers on their seed drills resulting in cover crops seeded in twin rows that left a 20-inch gap where the corn would eventually be planted. Some also refer to these techniques as precision-seeded cover crops. In all cases, the farmers planted corn into the skip zones in an effort to avoid any possible negative effects of the cover crop.

A cereal rye cover crop is seeded in “twin rows” at Michael Vittetoe’s farm on April 30, 2018.

Michael Vittetoe, who farms near Washington in southeast Iowa, was one of the participants in the project and talked about it at his field day in June 2018. “We wanted to learn what adjustments to our management practices are needed to successfully plant corn into a green cereal rye cover crop,” he said during the field day. Farmers have had mixed results with planting corn into a green, living cereal rye cover crop. Some report no problems with this practice. Past PFI research by Dick Sloan and Tim Sieren, however, echoes the results of the study by Alison’s team: They found that planting corn too soon after terminating a cereal rye cover crop can reduce yields by 5 to 21 bushels per acre compared to waiting at least 14 days to plant corn after terminating the cover crop.

Michael, like many other farmers, knows that the soil and water benefits of cover crops are directly tied to how much cover crop growth you can achieve. He also appreciates a cover crop’s ability to suppress weeds. “Weed suppression is excellent when the rye is alive, but begins to fade rather quickly once the rye is terminated,” Michael says. If you terminate a cover crop 10-14 days before planting corn, that cover crop is likely only 6-8 inches tall. That’s why he seeded a cereal rye cover crop in twin rows in fall 2017 and planted corn into the resulting skip zones the following spring. He compared two cover crop termination dates: four days before planting corn and eight days after planting corn. 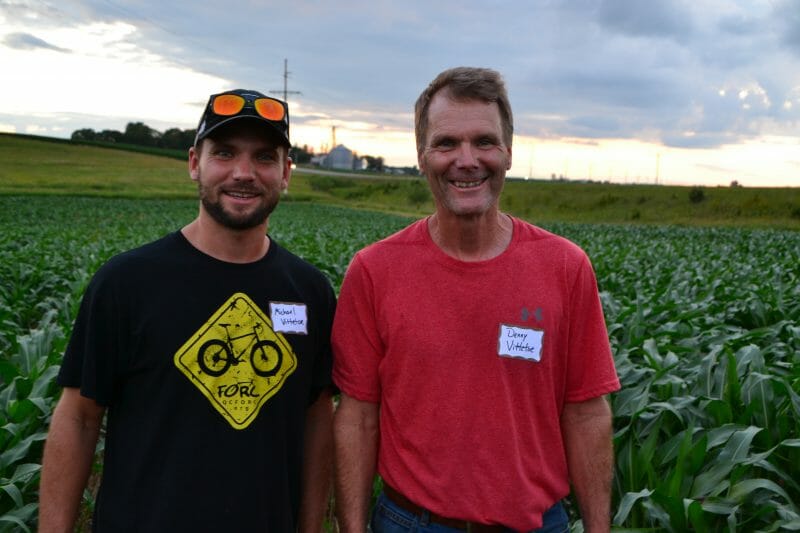 Michael Vittetoe and his father, Denny, at the PFI field day they hosted on June 26, 2018.

“We now feel comfortable enough with the early-season weed suppression by the cover crop that we are dialing back our pre-emerge residual herbicde program in 2019.” – Michael Vittetoe

“The corn in the late termination strips was a touch on the spindly side, which probably indicates it was looking for more sunlight,” Michael says. Tom Kaspar, a retired USDA Agricultural Research Service scientist who researched cover crops in Iowa for more than 20 years, thinks nutrient stress could be another factor. “My observations are that corn plants are nutrient-stressed early on when following a cereal rye cover crop, which could be one of the causes for yield drag in corn,” Tom says. In Michael’s trial, the cover crop killed a week after planting didn’t have a chance to return nutrients to the soil that it had taken up as the corn seedlings were emerging – which may have led to nutrient deficiency in the young corn seedlings.

“Weed control was a big factor in why we wanted to do this trial,” Michael adds. When seeding the cover crop in twin rows with a skip zone, Michael says he feels more confident narrowing the time interval between terminating the cover crop and planting corn. “We now feel comfortable enough with the early-season weed suppression by the cover crop that we are dialing back our pre-emerge residual herbicide program in 2019,” he says. “We hope to continue to cut back on herbicide use in the future.”

In a similar research, project, Tim Sieren and Jack Boyer used strip-till to remove a cover crop from the eventual corn row. Strip-till disturbs the soil only in a 6-inch- to-8-inch-wide band, where the distance between the center of each strip is 30 inches. Tim farms near Keota in southeast Iowa and Jack farms near Reinbeck in central Iowa. Both seeded a cereal rye cover crop in fall 2017 and made a strip-till pass in spring 2018 before planting corn. They compared the costs and benefits of this approach with no-till-planted corn. In the strip-till treatment, Tim’s corn yields were statistically higher by 15 bushels per acre. That yield improvement more than paid for the cost of the strip-till pass.

Jack, however, saw no yield difference between strip-till and no-till. When Alison’s lab team sampled the farms in late May, about half of the corn seedlings from either tillage treatment showed signs of disease. Just as her team had found in Michael Vittetoe’s experiment, removing the cover crop from the eventual corn row had no effect on the incidence of corn seedling disease. “The different findings between the on-farm trials and our trials on the research station serve as a learning opportunity,” Alison says. “It shows why research needs to be done over several years and locations in order to draw accurate conclusions.”

For Tim, the trial was an affirmation of his use of strip-till. “This trial confirmed the yield increases I’d been suspecting from my strip-till practices,” Tim says. “I credit the better yields from strip-till to drier, warmer soil in the row zone, which accelerates corn seedling emergence.” Tim notes that because strip-till removes the cover crop from the corn row – and thus, eliminates some of the competition the young corn would face – he feels more comfortable terminating a cover crop within one week of planting corn. Tim says: “That allows me to let the cereal rye grow taller and gain more biomass before I terminate it and plant corn compared to when I terminate the cover crop two weeks before planting corn in a no-till situation.”

When Alison spoke at the PFI field day Michael and his father, Denny, hosted in June 2018, she put Iowa’s cover crop need in perspective. “We need cover crops on 12 million acres in Iowa,” she said. “That’s roughly every other field in the state.” These are the number of cover crop acres needed to meet state water quality goals outlined in the Iowa Nutrient Reduction Strategy, first released in 2013. Among all of the practices listed in the strategy, cover crops are one of the most effective at reducing the amount of nitrogen and phosphorous moving from farmland soils to rivers and streams. According to recent estimates, nearly 1 million acres of farmland in Iowa have cover crops. By testing management practices and demonstrating success, PFI cooperators hope to encourage further adoption of cover crops across the state’s agricultural landscape.