Jeff and Gayle Olson find community and knowledge through PFI

Jeff Olson always knew he wanted to farm. He lived part of his childhood on a Henry County farm parcel that had been in his family in the late 1880s.

“I got addicted to farming playing in the dirt with my farm toys. Indoors, the oak flooring in our farmhouse was my rows. I’d go out and pick plantain heads, which look like mini ears of corn, plant them, and then go up and down the rows with my toy tractor.” With the future of the family farmland in question, Jeff’s parents moved to the town of Swedesburg when Jeff was nine. Jeff says, “I just hated living in town because I wanted to farm so bad.” Gayle Olson grew up in Castalia in northeast Iowa on an 80-acre farm. “In the hills where I grew up, you had to take care of the soil or you lost it. You couldn’t grow crops on it if you didn’t figure out how to keep the soil on the hill.” This led her dad to grow crops in a long rotation to feed their livestock, while also working as a bulk milk hauler. 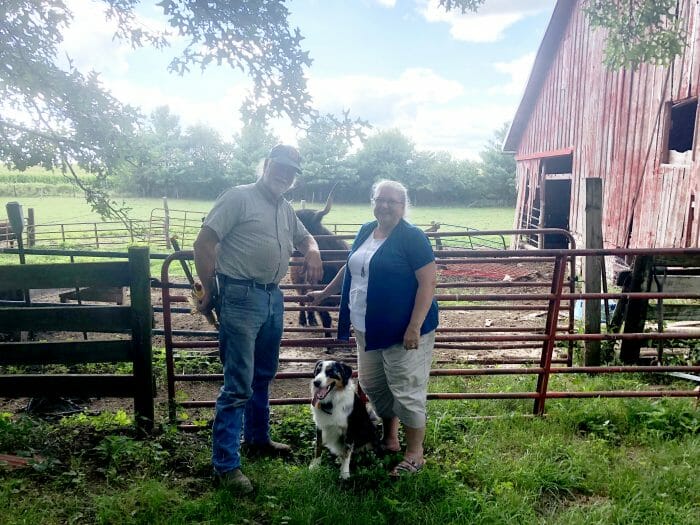 Jeff and Gayle Olson pose on their farm with their Australian shepherd dog, Gusto, and the Scottish Highland cattle they keep at their home pasture.

After Jeff received a bachelor’s degree in engineering and master’s degree in agriculture from Iowa State University, he returned home and worked multiple off-farm jobs. “I worked for anybody who would hire me. I worked for my farmland landlord driving a truck. I built grain elevators.” After receiving a bachelor’s degree in sociology and a master’s degree in family and consumer science education from ISU, Gayle worked in extension in youth and community development, first in Henry County, then in Louisa County. While building their careers, Jeff and Gayle pieced together farmland to rent and purchase to build their farm enterprise.

Jeff and Gayle currently farm about 1,300 acres and own about 330 of those acres. They rent from Jeff’s family, as well as a family who operates a corporation called Scattered Acres. Both the family land and Scattered Acres, as the name implies, contain multiple detached parcels. “It’s very inefficient,” Jeff says, “but it’s the land available for us to farm.”

Jeff and Gayle have tried to purchase more farmland contiguous to their home place, but other operations in the neighborhood are aggressively trying to expand their land base. Jeff and Gayle farm a combination of organic and conventional crops, and raise some livestock. “We worry about certifying rented ground organic, since we don’t own it,” Jeff says. “If we had more connecting land, we could put fences up and raise all kinds of livestock.”

“Being able to talk to other people who are doing wild and crazy things, both the education and the pure support, is crucial to how we’ve shaped our farm.” – Jeff Olson

He adds that hard work has ensured they have always been able to make money farming. “Organic helped us get into specialty products, and we’ve had good success. We’ve had some failures, too.” In addition to premiums for organic, Jeff and Gayle have received a premium for a multitude of niche products, like non-GMO beans and corn, white corn, blue corn, high-starch corn, International Organization for Standardization soybeans and low-linoleic soybeans. These premium crops require considerable paperwork, but the Olsons are well-versed with paperwork because of 50-50 crop-share arrangements. “We already ID-preserved stuff,” says Jeff, explaining how some bins are “mom and us,” others are “cousins and us.”

Jeff believes that farming “correctly,” including rotating crops, takes a lot of work. “It takes a lot of farmers, and we don’t have enough farmers to do it right,” Jeff says. “As we’re getting older, I’m worried about physically being able to keep up with everything.” Fortunately, Jeff and Gayle’s son, Ian, works on the farm. So does Jesse, a friend of Ian’s. “Jesse didn’t grow up on a farm,” Gayle says. “But he has a huge work ethic and loves being outdoors and able to spend time with animals. He’s been a really good fit.”

Now lifetime members, Jeff and Gayle have been PFI members since 1989. Research and demonstration has taken place on family farmland since the 1880s, when Jeff’s great-great-grandfather, in exchange for product, put in a tile demonstration project on what is now well-traveled U.S. 218. Jeff and Gayle have done their own on-farm research, including a project with the Iowa Natural Heritage Foundation and Super Crost Seeds, along that same visible roadway.

Jeff first met PFI co-founder Dick Thompson in college during an Agricultural Engineering Society meeting in 1976. He met Dick again as a soil and water commissioner in the late 1980s. Dick had heard of Jeff and Gayle’s research through Gayle’s work at ISU Extension. Practical Farmers needed a researcher in southeast Iowa, and Jeff and Gayle were ideal members. They were already conducting on-farm research, and were practicing ridge-till and strip-till. The Olsons participated in early PFI trials like late-spring soil nitrogen tests, strip intercropping, ridge-till with and without herbicides and many more.

In 2013, Gayle and Jeff received PFI’s Master Researcher award for conducting at least 20 on-farm trials through Practical Farmers, and holding at least five field days to share knowledge gained. From 1990 to 1997, Jeff served as a Practical Farmers board director. He is proud of recruiting David Lubben and Susan Jutz to the board, both of whom served as board president. Since 2017, Gayle has served as a board director as well.

Jeff says some of his favorite early farming memories were of crews working together. “The corn-shelling crew, hay-baling crew or barn-raising crew,” he says. “Camaraderie and working toward a common goal, especially helping someone out, makes you feel good. That doesn’t happen much in local communities anymore. Our PFI network helps bring back this camaraderie.” Through their involvement with PFI, Jeff and Gayle have helped foster that sense of community the organization creates.

“Being able to talk to other people who are doing wild and crazy things, both the education and the pure support, is crucial to how we’ve shaped our farm,” Jeff says. Gayle adds: “You can say things to other PFI members that you’d get made fun of if you said out loud to your neighbors. The access to knowledge that comes from old-timers and their depth of experience, and new-timers and their on-farm research, is invaluable. Information sourced through PFI is especially critical as public funding has decreased, and more land-grant university research is funded by agribusiness. There’s such a strong railroad train going in the direction of industrial ag. There’s still a lot of people who don’t want to farm that way – who don’t think it’s best for the land, for their families or for their planet.”

Practical Farmers now has over 3,500 members – and Gayle believes this growth will increase PFI’s visibility and reach, including PFI’s ethos of inclusivity. But she also notes that a bigger and more diverse membership will require members to stay focused on shared values. “With more members, it’s more likely we will be respected and more people will take note of the effectiveness of our collaborative learning model,” Gayle says. “The diversity within PFI is a very good thing. It’s important to share the concept that there are many ways to farm. As we get more diverse, we need to keep in mind the shared values that make us all part of the same organization. If we lose sight of those, we’ll be in trouble.”

Jeff sees on-farm research continuing to play a vital role in PFI’s future: “There are a lot of snake oils to research and prove or disprove through PFI on-farm research. We have to acknowledge that what really works is Mother Nature’s prairie definition. Diversity and keeping land covered. We need to work better to emulate the prairie.”

“Information sourced through PFI is especially critical as public funding has decreased, and more land-grant university research is funded by agribusiness.” – Gayle Olson

Gayle echoes Jeff’s sentiment. “We need roots in the ground all year round,” she says. “Our future generations deserve the opportunity to farm. There are people who want to farm in ways that are more in harmony with the planet. The emphasis needs to be more on that than only making money.”

Gayle would like PFI to connect more with youth. Their daughter, Torey, took part in PFI summer camp, a past PFI iniative, as both attendee and counselor. “Camp was a way for Torey to be actively involved in PFI, to take a leadership role and feel a sense of identity,” Gayle says. She and her fellow board members have helped bring youth programs back to PFI’s priority areas. We will explore how to better connect with our young population over this next year.

These days, one of Jeff’s favorite activities is doing chores with his granddaughter, Riley. “She loves to go out and ride on our UTV with me to check the cows.” All three of Jeff and Gayle’s children – Torey, Kinsey and Ian – are really interested in the future of the farm. Jeff and Gayle, like many Iowa farmers, don’t yet know what that future looks like. Hopefully, with the help of their PFI friends, they will be able to set a course for the future of their farm that honors their values.