Farming With a Plan

A business plan crafted while serving in the Savings Incentive Program continues to help Caleb and Jacqueline Shinn navigate their farm through change.

Growing up involved in agriculture is partly what drove Caleb and Jacqueline Shinn to think about farming with their family. Upon returning home from his deployment with the military, Caleb found a job in Osceola, Iowa. Once in their small apartment, they started looking for a farm on which to raise their growing family.

Jacqueline had grown up on a farm and Caleb spent summers doing a variety of farming-related jobs. Knowing they wanted to return to farming, the Shinns kept their eyes open for potential farmland. In 2012, three months after moving into their apartment, Caleb noticed a “for sale by owner” sign on a nearby farm. A few days later, with the help of a realtor, Caleb and Jacqueline placed an offer on a 12-acre farm, which would become L4 Farms.

Initially, the Shinns had intended to plant soybeans their first spring on the farm. But they quickly realized the plot was too small to effectively rent or custom-hire the work. Since the land had been a former horse pasture, they decided to graze cattle instead – something Jacqueline had always wanted on the farm. The couple purchased a cow and a heifer expecting that both were already bred – and intending to start the process of building a herd. But it turned out only the cow was pregnant. The rookie mistake was the first of many hiccups the family would encounter as they embarked on the farming path – one that started as a hobby, but grew into a business. Because Caleb wanted a little bit of everything on the farm, as their family grew, so did the farm’s enterprises. Today, the Shinns raise beef, pork and eggs for market, and fruits, nuts, vegetables, bees and rabbits for family use. 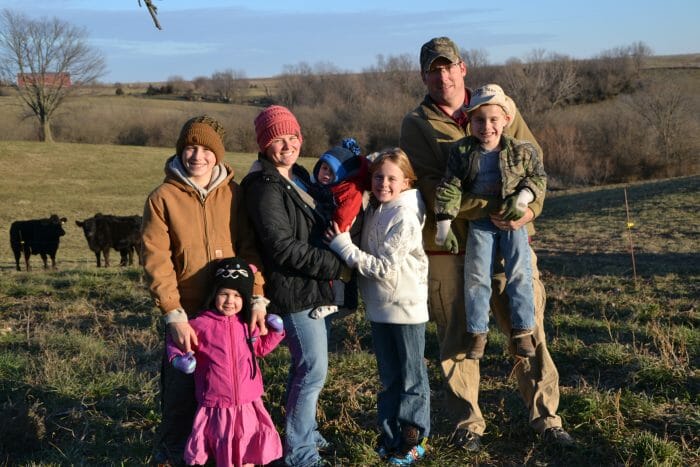 The Shinn family poses for a portait on their farm near Osceola.

The Shinns’ farming plans didn’t always include business aspirations. Initially, they just saw the farm as a lifestyle choice they wanted for themselves and their family. So as they got started raising cattle, their decisions were based on what made the most sense for them as a family. Caleb discovered the work of Joel Salatin, a well-known grass-based farmer and author from Virginia. Wanting to be good stewards of the land – and inspired by Joel – he and Jacqueline decided to use rotational grazing practices to help improve the farm’s soil. The pivot to seeing farming as a potential business came after Caleb and Jacqueline successfully marketed their son’s first steer in 2014. “We found that farming had the potential to not only feed our family, but also provide additional income,” Caleb says. In early 2015, the shift to farming for profit accelerated: The Shinns added eggs as an enterprise, and they experimented with raising broiler chickens as well.

In the fall of 2015, Caleb and Jacqueline learned about Practical Farmers’ Savings Incentive Program. Knowing a sound business needs a solid plan, they applied to the program in hopes of getting help creating their farm business plan. After being accepted into the two-year program – the Shinns officially started in January 2016 and graduated with the SIP Class of 2017 – they were connected with a mentor and started attending various PFI events, where they had a chance to network with and learn from other farmers. These connections, they say, led to tangible improvements in their farm business. “Hearing from other farmers and professionals helped us improve and increase efficiency on our farm,” Caleb says. Through SIP, the Shinns learned about marketing methods to help them sell halves and wholes of the livestock they raised. They even found an insurance agent that meet their needs through an exhibitor while attending the PFI annual conference.

Getting a start in farming can be difficult, and sometimes you need a little guidance to keep you on track. The Savings Incentive Program (SIP) was created as part of an effort to help beginners establish viable, sustainable farm businesses. The program was structured with input from beginning farmers, and direction from established farmers.

Savings Incentive Program Applications are NOW OPEN for the 2021-2022 class. Submit your application HERE before October 12, 2020.

Creating a Plan – and Planning for Change

Another part of completing the Savings Incentive Program was creating a business plan. When the Shinns applied for the program, they had a simple business plan that outlined what they wanted to accomplish within the following seven years. But they found this plan lacked the details needed to specify how they would reach those objectives – and they weren’t sure how to craft a plan that provided enough of a roadmap without being too cumbersome.

This is where the Savings Incentive Program really helped. Caleb and Jacqueline weren’t looking to create the kind of exhaustive business plan one could take to the bank to seek a loan. Rather, they wanted a plan that would help them become more effective and efficient. “Going through the business plan portion [of SIP] showed us many options to tweak and guide our plans,” Jacqueline says. “The largest advantage we got from SIP was learning the sequential layout of how to build the business plan.” In fall 2016, nearly a year into the Savings Incentive Program, the couple experienced firsthand the importance of having a robust and adaptable plan: Caleb was deployed overseas again, and he and Jacqueline discovered their fifth child was on the way. These developments prompted some necessary changes to keep the farm going.

“The largest advantage we got from SIP was learning the sequential layout of how to build the business plan.” – Jacqueline Shinn

Rather than putting the program on hold, Caleb and Jacqueline decided to stay in the program so they could keep building their knowledge – and the farm – during this challenging phase. Caleb kept learning while overseas, watching farminars live in the early-morning hours. Meanwhile, Jacqueline examined what farming activities could still happen while at home raising the family solo. Labor and time had become a deciding factor in what was feasible. Together, she and Caleb looked at their business plan and made adjustments based on the more limited time and labor they now had available to devote to the farm.

In late spring 2017, Caleb returned from deployment to reunite with his now larger family. He appreciates that his family is growing up on the farm. “The farm is the best playground the kids could have, on top of learning some good skills,” he says. He and Jacqueline are currently working to create better and more efficient fencing for their grazing system. They are also working to improve the genetics of their livestock – and they continue to learn and seek advice from others. Tending to their business plan and adjusting it as needed remains a regular part of their business practice. Having seen the benefits of creating a strong business plan, Jacqueline now stresses the importance of this process to other beginning farmers.

Don’t put in just enough,” she advises. “This will be your business. Dig in to the business planning like your life depends on it.”

Planning for the Future

Connecting with PFI’s network of farmers and other resources while in the Savings Incentive Program also continues to be helpful. “I find myself looking at the PFI listserves, and love reading what others are asking,” Caleb says. “It is a great tool that I want to use more in the future.”

As the Shinns look to the future, they see L4 Farms scaling up and moving closer to Van Buren County. Jacqueline’s family still lives in the area, and she would like to move closer to assist aging family when the time comes. She and Caleb are now using their business plan to help plot this move and secure funding to purchase around 100 acres. The move could be five to 10 years down the road – but as Caleb and Jacqueline have learned, careful planning can help them prepare for the reality ahead.