This is part one of a two-part series. This blog lays the groundwork for discussing habitat and wildlife conservation on working lands in a more scientific way. Part two will focus on identifying conservation goals and intentionally designing wildlife habitat on the farm to meet those goals.

We’ve had several habitat-focused PFI field days so far this season. At every field day I’ve tried to eavesdrop on conversations between hosts, speakers and attendees. Besides the usual fantastic exchange of information and ideas, I’ve been hearing a consistent question from members: “What is habitat?”

It’s a question I’ve been thinking about for a while now and the answer is more complex than one might think. Furthermore, a clear understanding of what habitat is and the nuances involved when talking about habitat is necessary for a more comprehensive discussion about habitat and wildlife conservation in working lands. To start and try and get to the bottom of some of these issues, I spent some time with Dr. Adam Janke, assistant professor and extension wildlife specialist at Iowa State University and picked his brain for insights. 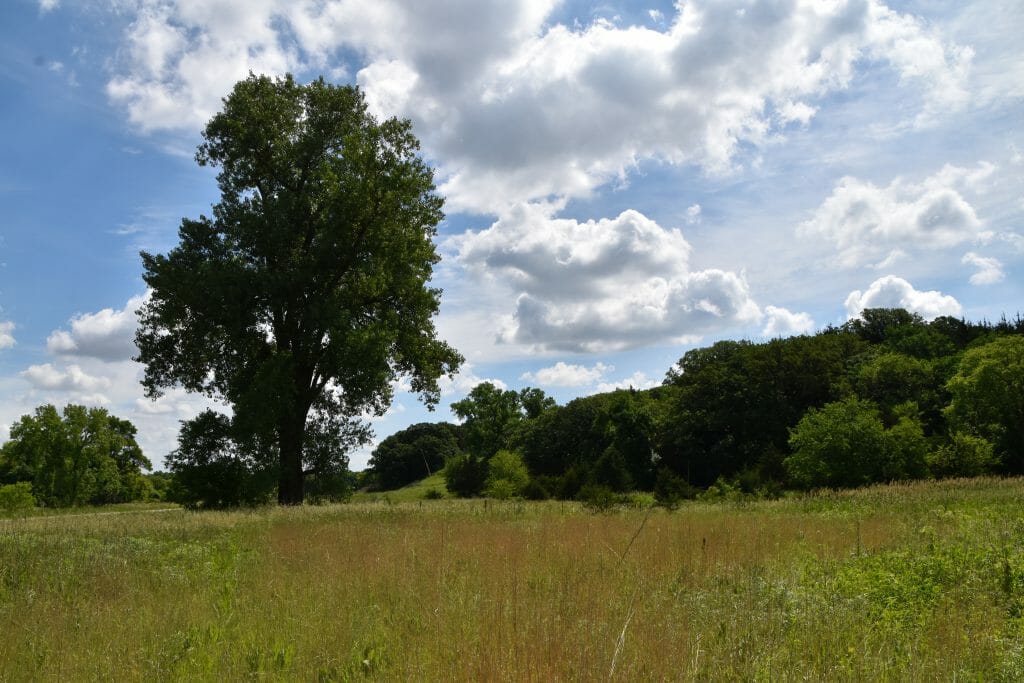 One thing that quickly became apparent is that there are two fundamental ways people use the word “habitat.” In casual conversation, most use it to describe the ecosystems or environments available to animals like prairie habitat or coastal or wetland habitat. This usage is often focused on the ecosystems and the plant communities, or maybe the hydrology of a given area. Adam, however, notes that such usage can be misleading when thinking specifically about wildlife. 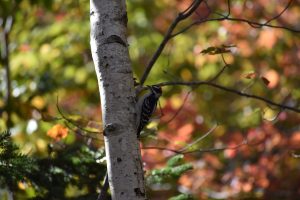 The smallest woodpecker found in Iowa, the downy woodpecker is a habitat generalist that can even make itself at home in suburban areas and can frequently be seen at backyard bird feeders.

“When thinking about wildlife conservation, habitat the noun is functionally meaningless without context,” he explains, “We need to talk about habitat as a function of a particular species, not as a general environment.”

Why is species-level context so important? Because different species of wildlife have different habitat requirements. As Adam explains, “Asserting that I’m ‘creating habitat’ could simultaneously mean you’re building a flat-roofed building where common nighthawks will nest or that you’re restoring host plants for the regal fritillary butterfly to a native prairie—same word, drastically different meanings.” 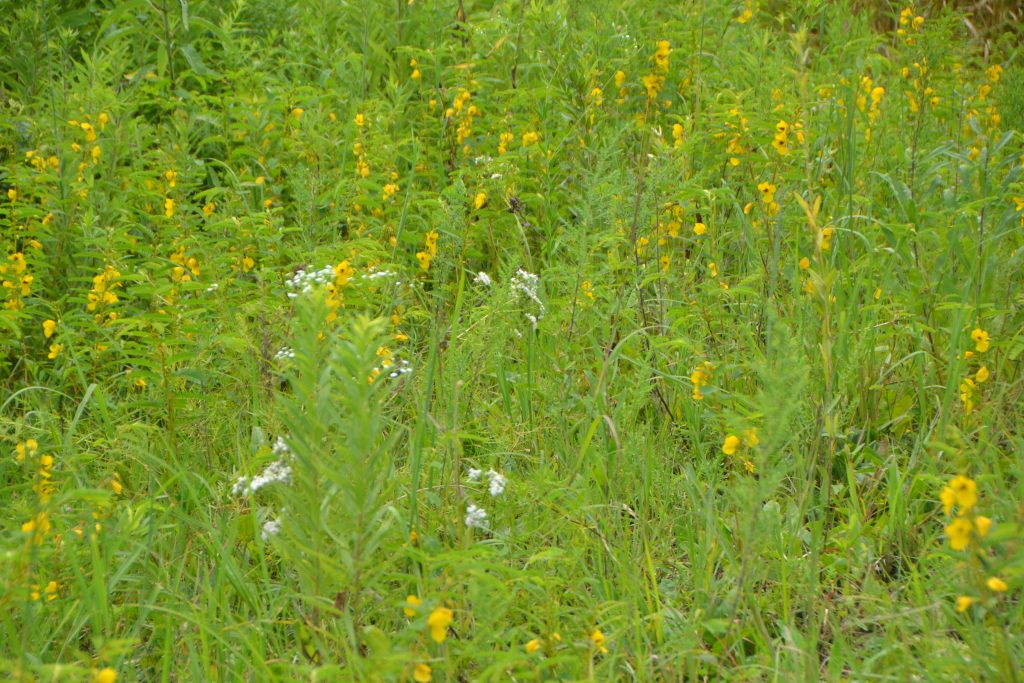 Restored prairie in Monroe County; note the differences in plant communities between this prairie and the TNC prairie pictured above.

Take prairie as an example. There are actually three types of prairie found in North America: tallgrass prairie, which was found in more eastern areas including parts of Iowa, Minnesota, Illinois, Indiana and Missouri; mixed-grass prairie, which historically dominated the Dakotas, Nebraska, Kansas and Oklahoma; and shortgrass prairie, which is found at the western edges of the great plains in Montana, Wyoming, Colorado and parts of Texas and New Mexico. When we talk about prairie in Iowa, we’re most commonly referring to tallgrass prairie, but we should always keep in mind that not everyone uses prairie to refer to the same types of plant communities.

Prairies can also be classified as wet, dry or mesic. Based on different hydrology and soil types, prairies in each of these groups can look and function quite differently. For example, a wet prairie in Iowa might include flora and fauna such as swamp milkweed, joe-pye weed, great blue lobelia, short-eared owls and northern harriers. A dry prairie, by contrast, may include species like round-headed bush clover, leadplant, butterfly milkweed, horned larks and upland sandpipers. To say that one is restoring prairie habitat, therefore, is not specific enough when considering wildlife outcomes. If the goal is to benefit upland sandpipers, one needs to think about habitat in the context upland sandpipers—restoring or creating wet prairie habitat is not going to meet that species’ needs.

The word ‘habitat’ is not a synonym for ‘ecosystem,’ although ecosystems are critical (and perhaps primary) components of habitat. In addition to biological communities of plants and animals, however, a species might have other requirements like structure, space or distance to certain features. All of these non-biological factors are also critical building blocks for what we might call habitat. To further complicate matters, most species need different types of habitat for different purposes and at different times.

Like bison, elk once called Iowa home in astounding numbers. Like the bison, extensive loss of large contiguous prairies and overhunting extirpated them from the state by the 1870s.

Water is not usually an issue for most upland birds—pheasant and quail can get the water they need from small puddles, dew on plants, or even just from their food. In Iowa, access to water is rarely an issue for pheasant or quail.

Shelter, also referred to as cover, is more complicated. There are different types of shelter: predator cover, nesting cover, brood-rearing cover, winter cover, etc. Some of these types of cover may overlap, but others do not.

“Cover is biologist speak for where wild critters spend their time while not feeding,” Adam explains, “The primary role of cover for pheasants and quail is to provide refuge from predators, to escape temperature extremes of cold winter and hot summer days and to provide a place to nest.” 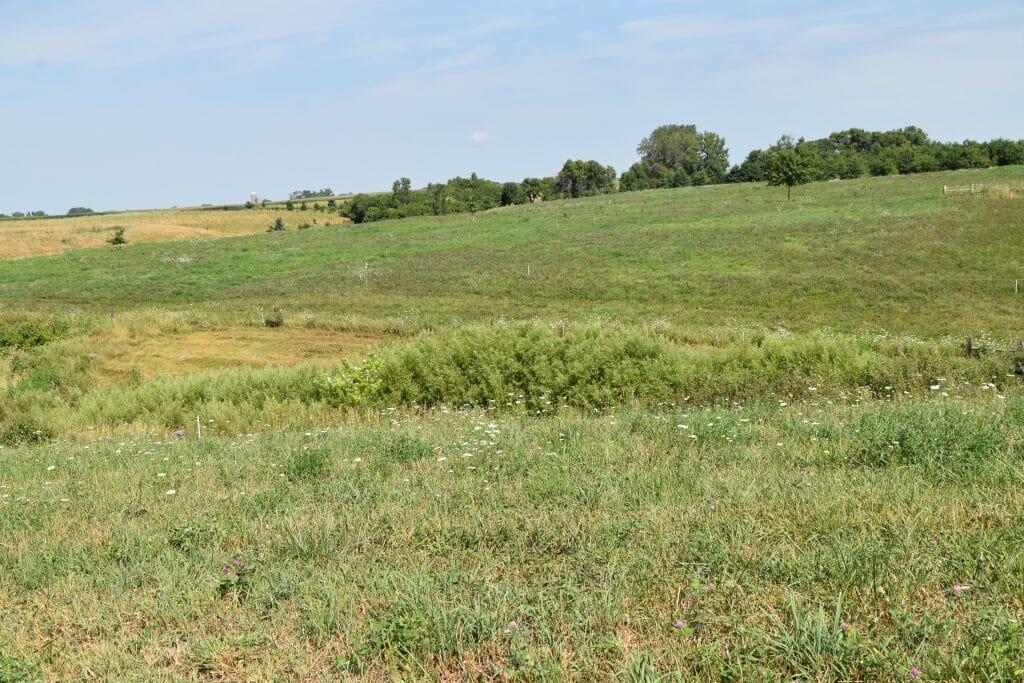 Although not true prairie, this diverse pasture in Polk County can serve similar functions for many (but not all) species.

Pheasant and quail are both ground-nesting species, but while pheasants nest in grass fields (the larger the better), quail are more of an “edge” species and prefer to nest near field edges readily building nests in fencerows or similar edge habitat. The type of grass can make a difference as well. Both species prefer native bunch grasses (e.g., bluestem or Indiangrass) over exotic cool season grasses like brome or fescue, although quail generally prefer shrubbier vegetation. Compared to exotic grasses, native grass species provide better aerial cover as well as better mobility on the ground.

Predator cover is critical for quail in particular, and bobwhites typically prefer shrubby or brushy vegetation like blackberry, raspberry or dogwoods. This brush provides dense cover that quail need to avoid predators. Shrubby habitat also provides refuge from extreme temperatures and weather, protecting quail and pheasant from hot summer days and cold winter nights. Native bunch grasses can also serve as excellent winter cover—unlike most exotic grasses, native bunch grasses are rigid enough that they bend but don’t break under heavy snowfall. The result are tunnels under the snow and grass that provide winter and predator cover while allowing for movement on the ground, something that sod-forming grasses like brome and Kentucky bluegrass cannot replicate.

A common moth species found across the world, the White-striped Black Moth uses a wide array of Impatiens species as host plants.

In terms of food, both pheasant and quail are fairly omnivorous, eating both insects and seeds. But quail and pheasant need different types of food at different times and in different places. For example, young chicks feed almost entirely on insects, and quail chicks in particular require bare ground with substantial overhead cover. A quail chick is roughly the size of a bumblebee when it leaves the nest; if ground vegetation is too thick, these tiny birds are unable to move about to find food, and a lack of overhead cover makes them easy prey for any nearby predators. But even more mobile adult birds need food sources close to winter cover. Pheasant and quail rarely starve to death, but a mismatch between cover and food sources can lead to exposed birds that are then vulnerable to other sources of mortality like predators and weather.

The requirements we just looked at for pheasant and quail seem pretty similar—sure, quail prefer more edge-of-field habitat, and need more brushy or shrubby vegetation, but that’s not a huge difference. What really separates quail habitat from pheasant habitat is a fourth component, what Adam terms the special considerations. 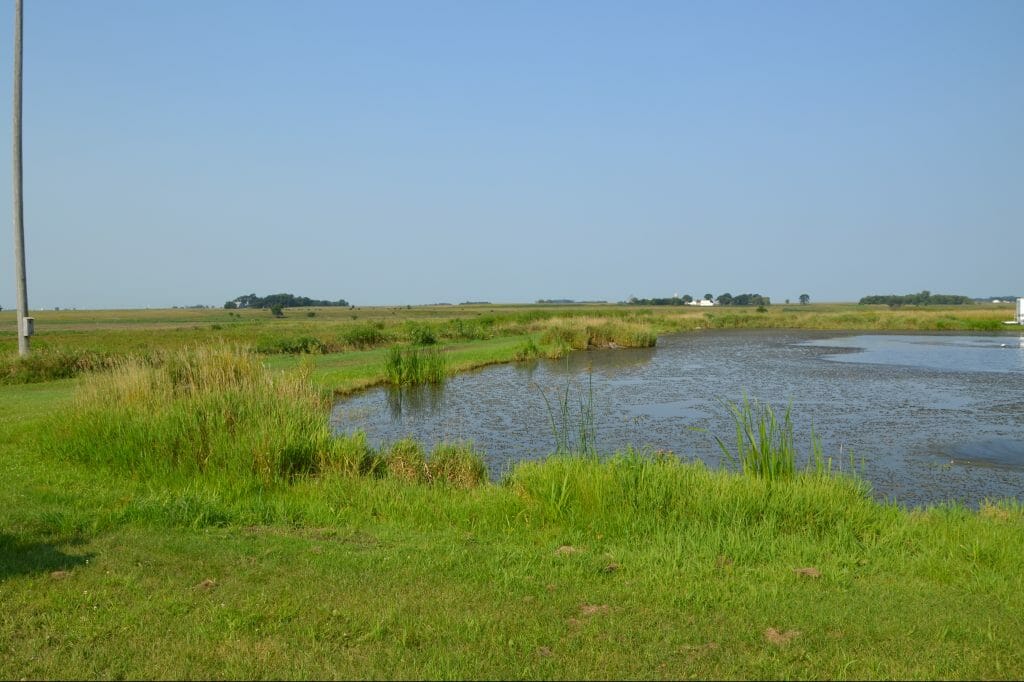 Wetlands are critical habitat for a variety of species, but especially migrating waterfowl and shorebirds. Different types of wetlands with different vegetation and different ratios of open water may be better suited for different species.

“Everything needs food, water, and shelter,” he says, “but then there’s special considerations—these may include the configuration of habitat on the landscape, space requirements, or the presence or absence of specific features.” Quail and pheasant share a special requirement — dusting areas. These bare-ground areas, used by quail and pheasant for dust bathing, are fairly common throughout the state.

These species differ, however, in their configuration requirements. Whereas pheasant will fly for miles to reach suitable habitat of various types, quail are much less mobile. Quail need all of the various types of habitat discussed above within roughly half a mile. Pheasants may prefer to run, but if pressed they will fly, and are strong flyers when properly motivated. Quail rarely fly, and only for short distances; for the most part, quail walk everywhere, and their habitat requirements reflect this relative immobility. When designing habitat for quail or pheasant, it is critical not only think about what type of habitat to install but also where that habitat is going to be located on the landscape. Habitat that benefits pheasant will not necessarily benefit quail if it’s not configured appropriately.

Another example of special considerations, particularly configuration and space requirements, can be witnessed by comparing two other grassland bird species: the dickcissel and the prairie chicken. Both species are native to Iowa, although the dickcissel is now much more common due in large part to the flexibility of their habitat configuration requirements. 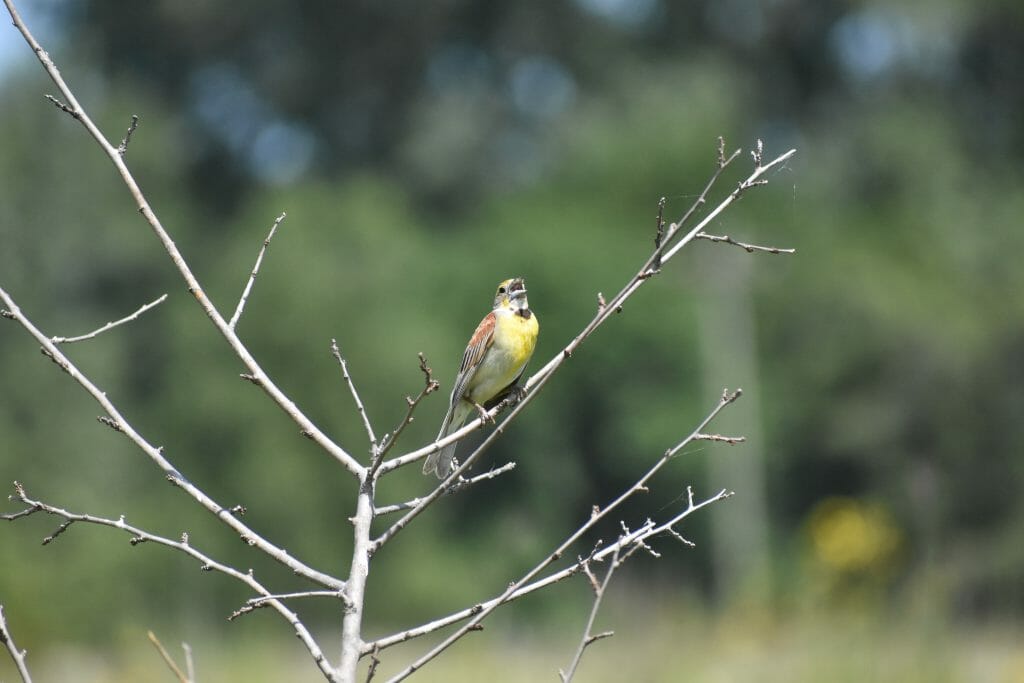 Dickcissel are a common sight and sound in the prairie; this fellow is enjoying his perch on a dead sapling in Linn County, IA.

“Dickcissels are really a generalist species—check their food, water and shelter boxes and they’re there,” Adam says, “Size, scale, layout, configuration, it doesn’t matter, they just need the basics.”

Prairie chickens on the other hand, are almost exactly opposite. “Prairie chicken need all of their boxes checked but on a huge scale,” Adam explains, “They really need thousands of acres of contiguous habitat, and they are extremely averse to tall objects, like trees and powerlines, within sight distance.” This scale requirement, as well as the aversion to tall objects, means that restoring prairie chicken habitat is much more difficult that restoring dickcissel habitat, even though both of these species are grassland birds. 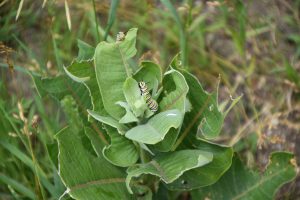 There are also generalist and specialist species. “Think about a monarch butterfly,” Adam says. “Monarchs only lay eggs on milkweed plants—they are specialists and cannot substitute another host plant.” In contrast, painted lady caterpillars can use a variety of plants as hosts, including some very common plants like thistle, and are one of the most widely distributed butterfly species on the planet. This specialist vs. generalist comparison is important to keep in mind when discussing habitat—for some species, habitat can mean something very specific, and for other species it might encompass a much broader range of environmental conditions.

In summary, there are several factors that must be considered when thinking about habitat and wildlife conservation. First is the fact that habitat must be considered in the context of a particular species—to use the term more generally risks missing or confusing key requirements. Second, every animal needs food, water, and shelter, although what these types of habitat look like will vary by species and by season. Third, special considerations such as space, configuration and location of habitat on the landscape, and scale are also critical when thinking about habitat. And fourth, definitions of habitat for a given species may be broader or narrower depending on whether or not that species is a generalist or a specialist.

In the follow-up to this blog we’re going to try and apply some of these principles of wildlife habitat to talk about how we can set goals and design and implement habitat intentionally on the farm to meet those goals. Stay tuned!

Lessons from the Prairie