“Cover crops are great, but you’ve got to have goals and reasonable expectations for them.”

I’ve heard some version of this statement from many of the cover croppers in Practical Farmers of Iowa’s network.

PFI farmers value learning from their peers – and they also appreciate the power of sharing their own stories and experiences. So I approached a few PFI farmers and asked them about their goals for cover crops and how they’re using cover crops on the farm to work towards those goals. What follows are the first-hand accounts of these farmers.

Their stories and advice share a common thread: an openness to change, and a drive to continue learning and improving.

Sam is a fifth-generation farmer near Williams in Hamilton County. He raises corn, soybeans, seed corn and seed soybeans with his father and uncle.

One spring we got a big rain and saw no soil movement. That was the day we were sold on cover crops. Before using cover crops, we’d see soil washing and 18-inch-deep gullies with those kinds of big rains. We had to repeatedly repair those gullies with a box scraper. So our main goal for cover crops is straight-up and simple: erosion control.

“We’re not quite sure yet how to manage cover crops to capture more weed-suppression or how to achieve suppression more consistently. Research is ongoing!” – Sam Ose

We prioritize harvesting our cash crops in the fall, but as soon as I have a window of opportunity, I seed our erosion-prone acres with cover crops. We’ve had the most success by seeding cereal rye or oats using an airseeder attached to a landroller – I can cover a lot of ground in a hurry. Because we also custom-seed cover crops for other farmers, I try to do an especially good job of seeding our cover crops in the field corners and near road edges so people can see how they look and how well they work. 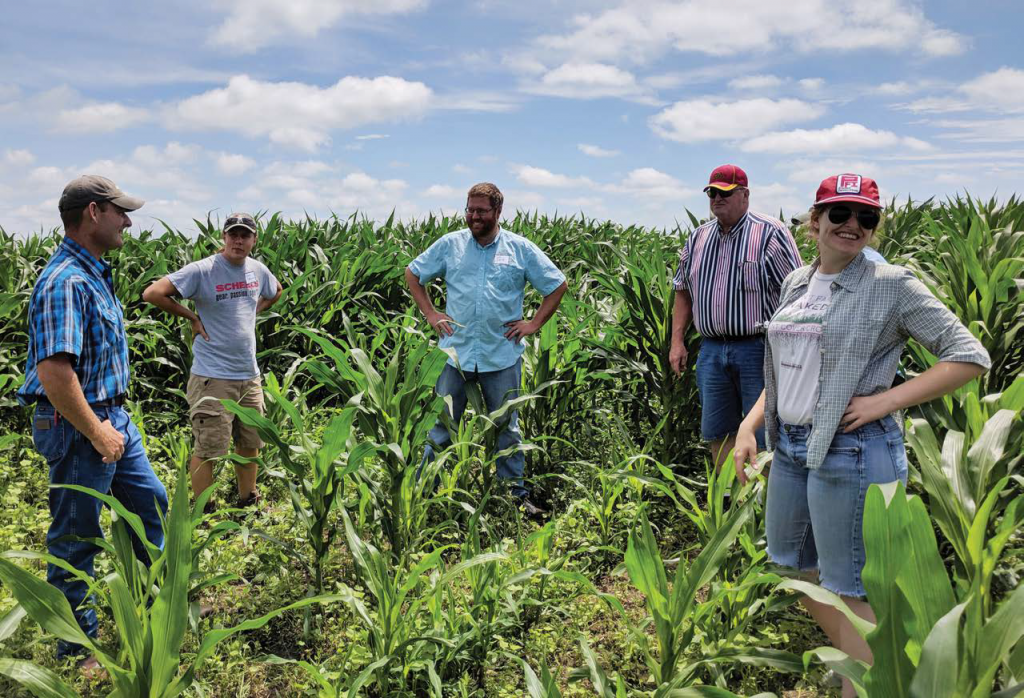 We see evidence of cover crops suppressing weeds in the early spring when we’ve planted soybeans into 3-foot-tall cereal rye – this made for a nice, early-season mulch. That our planter was properly set to plant into thick residue and that the residue was not a problem come harvest time went a long way towards easing any concerns about cover crops from my dad and uncle. We’re not quite sure yet how to manage cover crops to capture more weed-suppression or how to achieve suppression more consistently. Research is ongoing!

Steve is a sixth-generation farmer near Lenox in Adams County. He raises corn and soybeans with his parents and extended family. 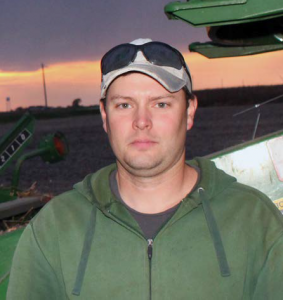 We adopted cover crops at the same time we began converting to no-till. I had seen cover crops in other fields and had read about them online. Many were reporting how well the combination of cover crops and no-till held soil in place – particularly on steep slopes. This aligned with my long-term goals of reducing erosion, improving soil health and more consistent yields over time.

So I’m hoping that implementing no-till and cover crops together will improve our soil faster. I’ve noticed that the fields with a cover crop seem to support equipment better through the season, especially if conditions have been on the wet side. The cover crop pulls water out of the soil and the root channels they create also allow for better infiltration.

We drill cereal rye to cornstalks in the fall; these acres will be planted to soybeans next spring. In the spring, we pay close attention to good conditions for cover crop termination. We terminate the cover crop at about the same time we plant soybeans. This doesn’t add any spray passes to our normal routine – we would be applying a pre-emergent herbicide normally.

There’s always some learning involved with new practices. We don’t see 100% success all the time, but we are making incremental progress.

Levi raises corn and soybeans with his father near Keota in Washington County; 40 acres have recently been certified organic.

Using cover crops to minimize or eliminate the use of ag chemicals was initially appealing to me as we were looking to transition to organic. In particular, we were interested in how to control weeds in both our organic and conventional soybeans with cover crops. We bought a roller-crimper for terminating the cover crop in the spring and laying it down in a thick mat to prevent weed emergence. 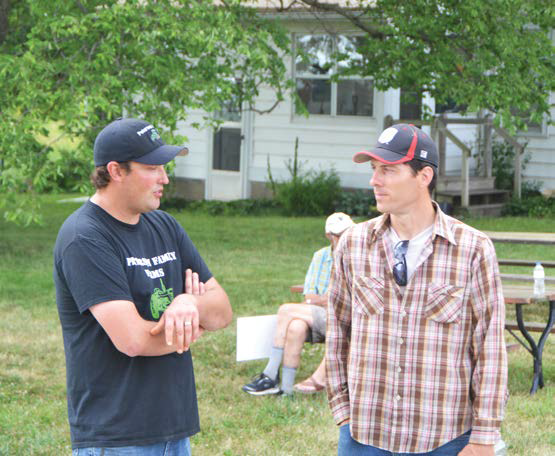 We raise 105-day and 102-day corn in order to harvest early and get a cereal rye cover crop seeded by mid-October. But there’s no excuse to not be seeding rye whenever I can on my farm; even if it’s in November. I’ve seen that, when seeding in November, the rye is only about knee-high the next June. We were still able to roll and avoid the first spray pass in our conventional soybeans.

With this system, we had to swallow the pill that, yes, we are seeding soybeans later in the spring because we have to let the rye cover crop get to the flowering stage before roller-crimping (this typically occurs in early June). But we have seeded soybeans May 20 and then rolled the cover crop two weeks later when the soybeans were 5 inches tall. Those beans seemed to come through the rye mat okay and looked beautiful.

This past year, we were among the first soybeans seeded in our county. May was so wet, but the rye cover crop allowed me to get in the field in early June before most other farmers could who didn’t have a cover crop. As of Oct. 11, those soybeans looked as good as any other beans out there in the county. This has helped me realize that how we treat the soil matters. Ultimately, I hope my kids have access to good-quality farmland that is better than the soil I’m farming.

I like to try new things. A few years ago, I started reading as much as I could about cover crops. I also went to several meetings, like Ray Archuleta’s Soil Health Academy, to learn more. I learned that we need to look at profit per acre, not bushels per acre. It’s not all about yield. It’s also about limiting input costs. So I took it to the next level by establishing a three-year rotation of corn, soybeans and wheat.

I seed a 13-species cover crop mix after wheat harvest in the summer. The mix includes legumes like sunn hemp and peas that haul in some nitrogen from the atmosphere. The atmosphere is something like 70-80% nitrogen; that nitrogen is all there, we’ve just got to make it available to our crops.

“I’m using a cereal rye cover crop ahead of my soybeans for a variety of reasons: to reduce soil erosion, improve water infiltration and suppress weeds with the hopes of reducing herbicide costs.” – Gary Johnson

My goal here is for the mix to enrich the soil and reduce my need for chemical nitrogen fertilizer for the corn I plant the year after the wheat. Can I get away with applying just 120 units of nitrogen per acre? So far this year, that corn is looking good. In the future, I’d love to get someone to put cows out to graze the summer mix that also contains sudangrass, oats, flax, buckwheat, radishes, turnips, collards and sunflowers.

I’m using a cereal rye cover crop ahead of my soybeans for a variety of reasons: to reduce soil erosion, improve water infiltration and suppress weeds with the hopes of reducing herbicide costs. I plant soybeans green: The cereal rye cover crop is sprayed and then rolled with a landroller after the soybeans are planted.

This results in a nice mat of rye residue that really holds back weeds like marestail. Right now, I’m spraying in my soybean fields twice: once to terminate the rye and a post-emergent herbicide later in the early summer. But what I want to see is if I can eventually get away with one shot of glyphosate early in the season and be good on weed control the rest of the year.

I like to sit down in the evening and check out info on YouTube. There’s lots of info out there – people talking about their mistakes and successes. It really helps to learn from other people.

Cody is a fifth-generation farmer near Lytton in Sac County. He returned to the farm three years ago and raises corn and soybeans with his dad.

I wasn’t even really considering cover crops until I got involved with PFI and began attending field days. Dennis and Wesley Degner nearby have been trying cover crops, and after attending Sam Bennett’s field day this summer, it became obvious to me that we had to try something. This is the very first year we have seeded a cereal rye cover crop into standing corn. 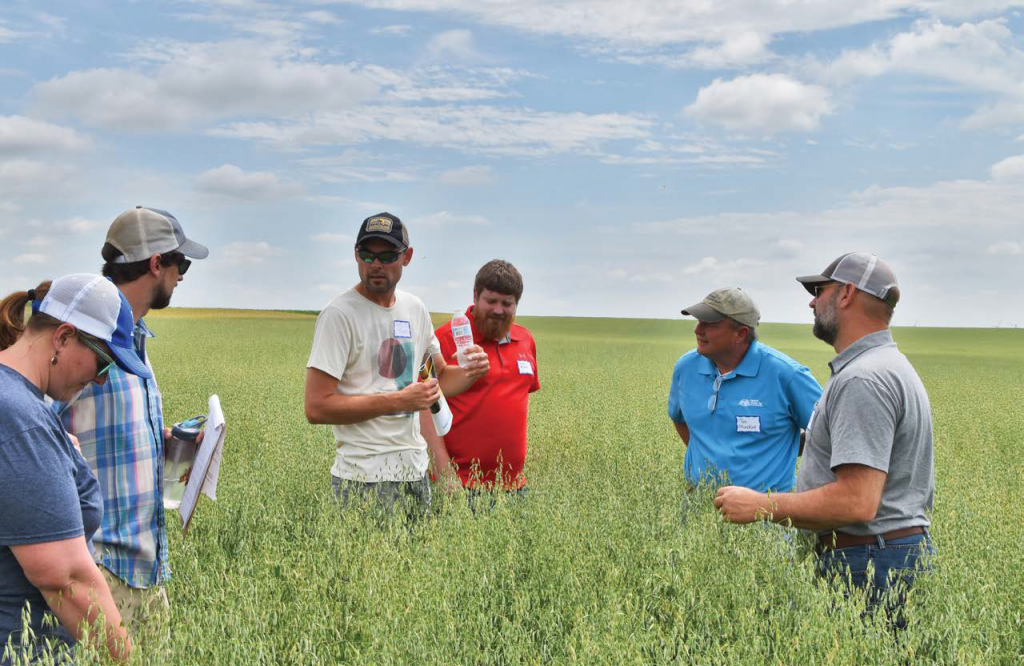 We are certainly not convinced of its success but feel it is worth trying for a few reasons. These include concerns about soil erosion, soil compaction and water quality; the water quality of the Raccoon River has been in question in recent years. I’m foolish to think that regulations will not be forced upon me in the future. I need to start understanding measures to help water quality, prepare myself and my equipment before I am forced to do so.

Also, as first-time users of cover crops, the Natural Resources Conservation Service is providing us cost-share of $25 per acre, so we are under very little risk for the initial investment of seed and application. Right now, we are only trying a cereal rye cover crop in a field that will be soybeans next year. Next spring, I am going to pay close attention to the weather. When it looks like daytime temperatures will be above 60 degrees for two or three days in a row, I will look to spray the cover crop and seed the soybeans shortly thereafter.

I also think the only way to learn new things is to start taking risks. I like to stretch myself and cover crops seemed like a good way to go about this. I need to prepare myself for a greater risk in commodity agriculture going into the future. As such, I am currently considering a transition to organic practices in the next decade. The organic transition is a multiple-year change in mindset: understanding risk and how to adapt to it is a big part of organic farming.

“I also think the only way to learn new things is to start taking risks. I like to stretch myself and cover crops seemed like a good way to go about this.” – Cody Glasnapp

So in one way, cover crops may be my first step towards the organic transition process. It’s about trying new things and keeping my passion on the farm.