Farmers share their strategies and frustrations with this perennial challenge.

But farmers who are successful at managing weeds also know that it isn’t just the tool that matters. It’s the system you create – and when you engage the different pieces of that system – that helps keep you ahead of the weeds. 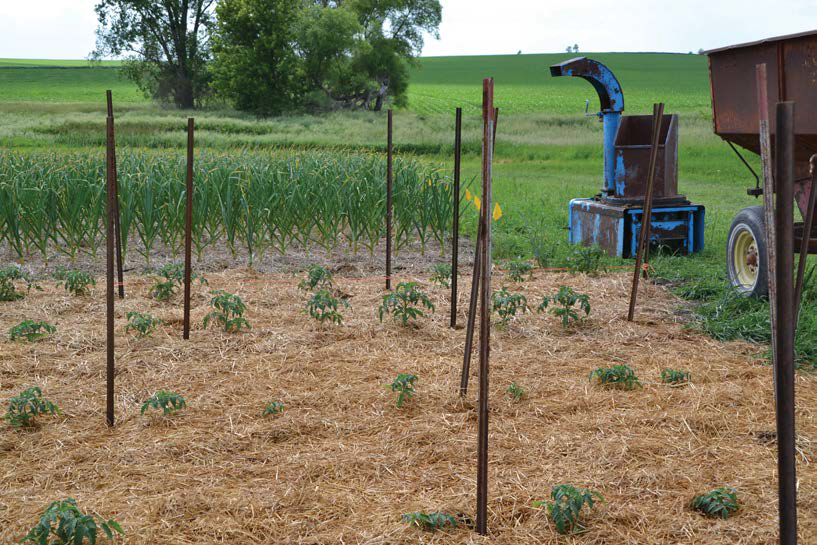 No-till vegetable production is a popular practice among smaller-scale growers, and is weaving its way into the imagination of larger producers, who are only limited – for now – by the challenges of adapting it to their scale. By not tilling or cultivating and keeping the soil covered with mulch, growers preserve and build soil structure and tilth, and keep weed seeds in the seedbank buried.

What is a mulch? From Merriam-Webster, it is “a protective covering (as of sawdust, compost or paper) spread or left on the ground to reduce evaporation, maintain even soil temperature, prevent erosion, control weeds, enrich the soil or keep fruit clean.” To this list, vegetable growers might add: billboard or silage tarps, white or black plastic, landscape fabric, cardboard, straw, grass clippings, living plants, pine needles, chopped leaves, corn stover or other available plant materials. 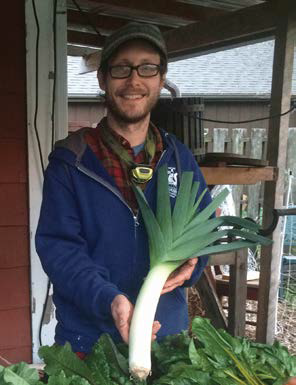 Jon Yagla, of the Millet Seed Farm near Iowa City.

Mulch choice is determined by a variety of factors, including crop season length, growth habit, harvesting system, disease management, soil needs, mulch availability, purchase cost, mulch application – and for non-biodegradable mulches, mulch removal and disposal considerations. For example, black plastic mulch is effective, but can be difficult to remove from the field and has few, if any, options for responsible disposal.

Jon Yagla grows primarily no-till vegetables in an urban setting for his Iowa City CSA. Most of Jon’s crops are transplanted – everything except carrots, radishes and greens mixes. Frequent transplanting creates short successions between mature crops, which helps Jon stay ahead of the weeds.

“The diamond hoe is fast to work with if the weeds are small. I like it better than the stirrup hoe.” – Jon Yagla

To quickly turn over beds between transplanted crops, Jon pushes the leaf mulch from the bed into the walkway, plants the transplants, waters, and immediately re-covers the bed with the mulch. Time-lapse video of this process on another farm can be seen in the 2019 farminar featuring Elizabeth and Paul Kaiser, of Singing Frogs Farm in California.

For longer-season crops like tomatoes and kale, he uses deep leaf mulch, and also likes to use a deep mulch in the pathways. “I am always trying to put down a little less leaf mulch; I sometimes regret having too much mulch down during a wet season.” In shorter-season crops, Jon uses only a light layer of leaf mulch and catches stubborn weeds early with a 7-in. diamond hoe. “The diamond hoe is fast to work with if the weeds are small. I like it better than the stirrup hoe because if there is a light layer of leaf mulch it can slip right under without catching too much debris.“

Patrice Gros, an inventive no-till vegetable farmer in Missouri, primarily uses straw mulch. His 2017 books show his annual straw expense at $1,500, or 6.2% of his farm’s expenses. Hired labor accounts for 41.8% of his farm’s expenses. The half-acre of production beds bring in $80,000 in gross revenue – $56,100 in net revenue. To Patrice, the benefits to the soil and crops, not to mention the cost savings in machinery and labor, outweigh the cost of purchasing and spreading the straw.

To adopt no-till organic, however, requires a significant volume of mulch, which either needs to be grown on the farm, purchased or recycled from another use. Patrice purchases 600 35-pound small squares that he uses on his half-acre. Oats yield about 1 ton (2,000 pounds) of straw per acre. The arithmetic follows that his half-acre of no-till vegetables requires 10.5 acres of oat straw.

Most organic vegetable farmers are using a combination of mulches to suppress weeds from germinating, and mechanical cultivation to eliminate those that do. As in organic field crops systems, cultivation tractors and implements range from vintage classics, like the Allis Chalmers G or Bolens walk-behind tractor with sweeps or beet knives, to modern alternatives like finger weeders, flame weeders and steerable systems.

But several factors set weed management in vegetable systems apart from their agronomic cousins. First, many of Iowa’s vegetable farmers, are growing upwards of 15 different crops – not to mention they are growing multiple successions of some crops, to stagger harvest throughout the season. This means they need equipment that works across crops, or makes it easy to adjust implements or swap them out throughout the day.

“Crop spacing and placement is a quick way to invite weed problems if you choose poorly,” says Rob Faux, a vegetable farmer near Tripoli. “What we’ve learned over time is that we need to choose our row spacing to fit our tools. For example, we moved to planting four rows of onions in a single tractor-width bed so we can use our tine weeder to control early weeds.” 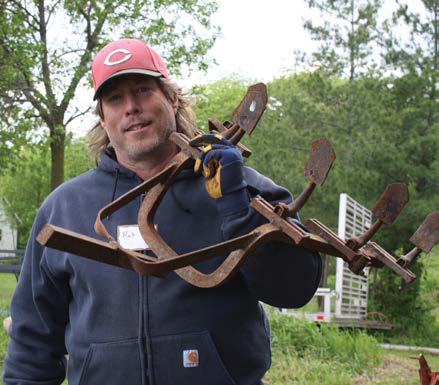 T.D. Holub raises organic vegetables, chickens and eggs near Coggon. He uses straw mulch for some crops, like garlic and tomatoes, but he relies on weekly cultivation with an old S-tine cultivator and a Williams Tool System that has adjustable flex tine weeders, hilling discs and sweeps for the tire tracks. “This season, my goal was to eliminate most hand weeding from my large, 6-acre field,” T.D. says.

“Each year, I look at ways to make weed management easier. Mostly, it just means me getting out there more often and making sure that my cover crop rotations and stale bedding are on time.” – T.D. Holub 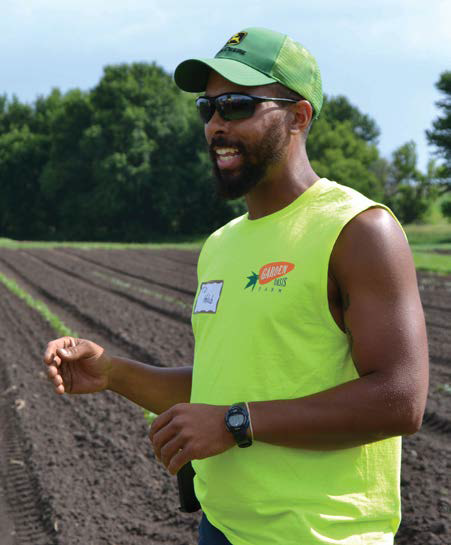 To do this, he set all of his crops to 30-inch spacing and determined to cultivate at least once weekly, twice if possible, before weeds were even visible. “We only had to hand-weed the onions twice this season, and they were quick walk-throughs, not hands and knees crawling through the field.” T.D. notes that better weed control made harvest easier and lowered disease and insect pressure.

Like all farmers, T.D.’s weed management is not perfect. “One area I can improve is stale seed bedding,” he says. “I do this throughout the season, but sometimes I get behind and have to plant into a fresh field. That is when weeds become more of an issue.”

Stale-bedding is a practice where surface-level weed seeds are allowed to germinate, then the field is shallowly cultivated to eliminate the first flush of weeds in their thread stage. The cash crop is seeded or transplanted immediately afterward, taking advantage of the now weed-free field.

“Each year I look at ways to make weed management easier. Mostly, it just means me getting out there more often and making sure that my cover crop rotations and stale bedding are on time.”

Other farmers share T.D.’s frustration with time management and weed control. In addition to the job of managing weeds in each crop, they are also planting, picking, washing, packing, scouting for pests and going to market throughout the season.

“The correct way to manage weeds is to catch the weeds while they are at thread stage,” Rob says. “Unfortunately, I am not so clever as to have found a way to always get those weeds at the proper time. It seems they do not take a look at our calendar for available labor, nor do they give us a pass when the fields are too wet to get into them.”

In addition to cultivation tools, Rob is avid about experimenting with different types of biodegradable mulch, from living mulch like New Zealand white clover, to innovations in paper mulch products. He is also looking at pinch-points for labor to identify areas to improve weed management at the systems level.

“For many years we used straw mulch for our tomatoes to control weeds and prevent soil splash,“ Rob says. “Unfortunately, our labor was always spread too thin that time of year to get the mulch done in a timely fashion. The new solution was to put the transplants directly into paper mulch. While paper mulch may have a higher initial cost, we saved significant amounts on our overall labor cost, and more importantly, we saved labor during a busy time of year.”

But no matter how much you fine-tune your system, there is always more to learn. “The day I think I know everything about weed control is either the day I will be proven wrong, or it will be the day I should stop farming,” Rob says. And in case you’ve let a few weeds get too far along, Rob reminds us that “there is something to be said for providing weeding jobs for those who might need a little character-building.”