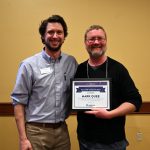 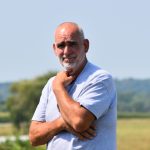 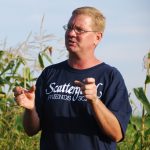 AMES, Iowa — Practical Farmers of Iowa has honored two farmers – Mark Quee of West Branch and Bruce Carney of Maxwell – with its Master Researcher Award for their extensive contributions to on-farm research and knowledge-sharing over the years.

The awards were presented at a dinner on Thursday, Dec. 12, in Ames during Practical Farmers’ annual Cooperators’ Meeting, where farmers and collaborators involved with PFI on-farm research gather to share results of projects and discuss ideas for the coming year.

The Master Researcher Award was established in 2013 to honor those who have conducted at least 20 on-farm research trials through PFI’s Cooperators’ Program and hosted at least five field days with PFI to share the knowledge they have gained.

Mark and Bruce are the first farmers to earn master researcher status since the inaugural batch in 2013. They join 12 other farms or individuals to have been recognized with the Master Researcher Award since its inception. The complete list of recipients is available at practicalfarmers.org/award-recipients.

Mark Quee is the farm manager at Scattergood Friends School, a small Quaker boarding school near West Branch, about 15 miles east of Iowa City. The school’s farm includes 8 acres of organic gardens and orchards; about 30 acres of pasture used to grass-finish beef and lamb; a small flock of turkeys; a few heritage-breed Guinea hogs; and occasional broiler and laying chicken flocks.

“My very first PFI Cooperators’ Program research trial was in 2009, when we looked at the weed suppression capacity of tillage radish in an organic vegetable system,” Mark says.

“Weed suppression results were inconclusive – but as often happens, there were unexpected findings. The soil tilth and structure impressed me so much, I thought I had found the next great innovation in food production: letting tillage radish literally do the tillage for us.”

Bruce Carney farms with his family at Carney Family Farms on 300 acres south of Maxell. The family primarily raises grass-fed and -finished cattle, hair sheep, pigs and poultry. They have also begun adding fruit, nut and shade trees and practicing silvopasture with their diversity of livestock.

Since 2009, when Bruce joined the Cooperators’ Program, he has conducted 20 on-farm trials and hosted seven field days. His research over the years has spanned grazing cover crops, pasture management, monitoring carcass quality in grass-based systems and wildlife monitoring on the farm.

Bruce says he wanted to do on-farm research with PFI to learn more about cattle and pasture. “I want to leave a legacy rooted in perennial agriculture for my children and grandchildren,” says Bruce, who was unable to attend the award presentation.

“I found Practical Farmers of Iowa and learned they were a diverse group of people, farmer-led. It didn’t matter what you wanted to research. PFI would help set it up and connect you with other interested farmers.”

Since 1987, when the Cooperators’ Program began, over 241 farmers have conducted 1,443 research trials on a wide variety of topics in field crops, horticulture, livestock and grazing, wildlife habitat and more.

To learn more about on-farm research at Practical Farmers of Iowa, contact Stefan at (515) 232-5661 or stefan@practicalfarmers.org.