A Farm Transfer in Progress

For the Hjertaas family, dialogue and shared values are guiding succession plans

Blain and Naomi Hjertaas have been farming near Redvers, Canada, for 46 years on farmland that has been farmed by Blain’s family since 1915.

About 12 years ago, the couple was pondering the next step for their farm. Their three kids had all gone off to college and then to professions off-farm. “We thought that maybe a few more years and then we’ll sell the farm and go and put our feet up at the lake and be done,” Blain says. Before acting on this thought, however, their oldest son said he’d like to try farming. “That put things into a different perspective,” Blain says. “We said, ‘Sure, let’s do that. Let’s give it a whirl and see what happens.’”

Blain spoke about his farm transfer journey at PFI’s annual conference in January, which was themed Reclaiming Resilience. “Part of resilience is planning for that next generation,” Blain says, “whether it’s our own families or somebody that’s going to intern and maybe eventually have ownership. If I just had a sale and sold it, the book closes on the 105 years of knowledge my family has accumulated about our farmland. I don’t think that augers well for society.” Blain’s experience offers potential insight for others working on farm transfer. 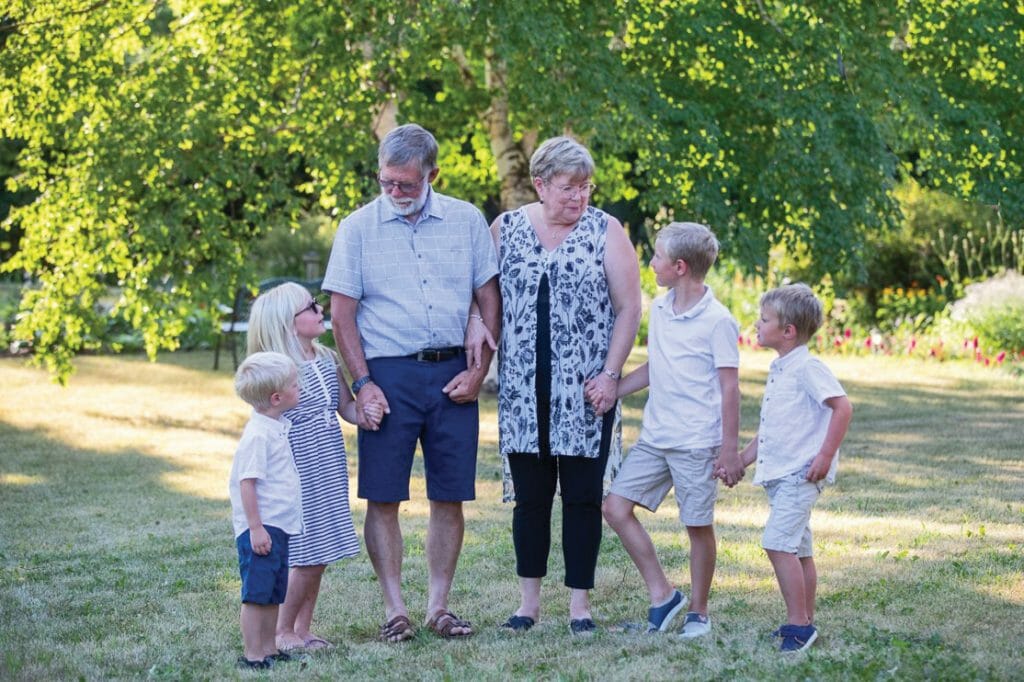 Being profitable, Blain argues, is vital if families are to be successful in succession planning – or in business more generally. He agrees with Henry Ford’s quote: “Whether you think you can, or you think you can’t –you’re right.” In Blain’s view, all farmers have the potential to turn a profit – but he says they have to be willing to delegate some of the tasks they enjoy doing.

“We’re farmers because we like to work with our hands. We’re good at feeding cows, fixing fence, seeding, combining, hauling grain, growing vegetables,” Blain says. “We really like doing that kind of stuff. But those are what I call in-jobs. There’s only one job on my farm that I can’t hire out, and that’s the thinking.”

“Part of resilience is planning for that next generation, whether it’s our own families or somebody that’s going to intern and maybe eventually have ownership.” – Blain Hjertaas

While a lot of farmers don’t relish the business aspect of farming, Blain says it’s critical for farmers to analyze farm profit. “Maybe it’s an hour every morning for five days a week. Maybe it’s three hours two mornings a week. You need to teach yourself habits to work on the business.” While Blain says he counts on financial experts for advice, he stresses that “you can ask them what they think about your ideas, but they can’t dream them up for you.”

Blain advises, “Don’t wait until you’re 94 with one foot in the grave before you start. My son and daughter-in-law have been farming with us now for 12 years, and we have no formal plan in place. We still don’t, to this very day, and that’s probably a mistake. We should have pushed that a little bit harder.”

Soil health is paramount to Blain and Naomi, a value that influences their succession planning. “If my son said he was going to be a big-time chemical user, and soil health didn’t mean anything to him, we wouldn’t get along very well and succession wouldn’t work,” Blain says.

He and Naomi let their returning son and his wife know that if they wished to come back to the farm, it was important their beliefs and land ethic aligned. As big proponents of Holistic Management, they asked their son and daughter-in-law to take Holistic Management training. “So they did,” Blain says, “and they bought into it well, which made it work really well for our goals to align.” 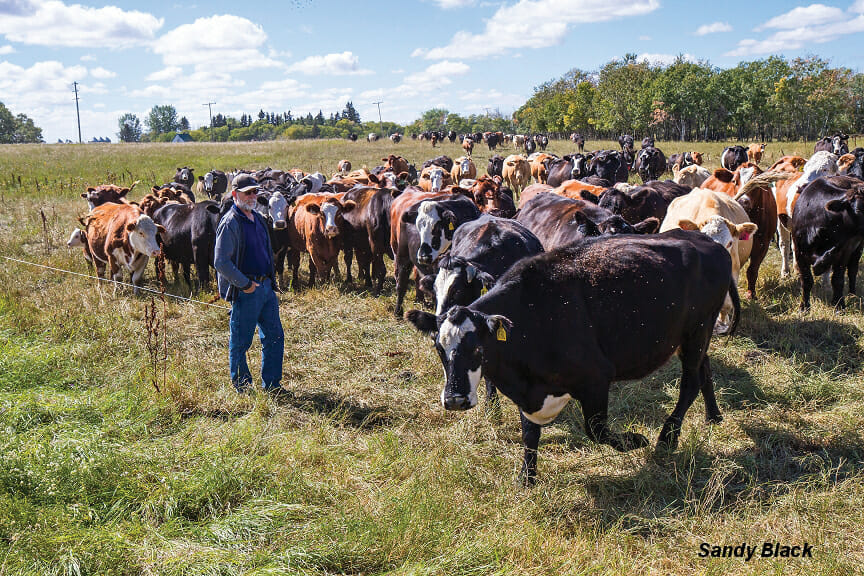 Blain moves cattle on his farm near Redvers, Canada.

Sharing values doesn’t mean farm production won’t change. When Blain and Naomi’s son and daughter-in-law came back to the farm, Blain was operating a cow-calf operation and the whole farm was in pasture. The son added poultry, but didn’t enjoy direct marketing. “Our daughter-in-law was a bit intimidated by cows, so they thought they’d try sheep,” Blain says. Blain’s son and his wife have scaled up their sheep operation and currently are running 400 ewes. While enterprises have changed, the focus on soil health is aligned for both generations.

When the oldest son and his wife shared their desire to come back to farm, Blain and Naomi scheduled a family retreat off-farm. Blain emphasizes the off-farm aspect. If you meet on the farm, he says, “all of a sudden you look out, a cow is out. So guess what I’m going to do? I’m going to go out and chase the damn cow in, and the whole meeting stops for a while. It’s important you go where you aren’t thinking about cows.” Blain and Naomi hired a facilitator for the family retreat to ensure a neutral third party was guiding the discussion. “I don’t think it works for me as the dad to facilitate with the kids,” he says. “We all have to be equal.” The facilitator led conversations about who was interested in coming back to farm, to make sure the other children had a chance to express interest alongside their brother. They concluded they weren’t interested in returning, and this clear communication enabled transfer to continue.

Communication allowed Blain and his returning son to ensure their goals aligned. For both, things work better if they give each other a little distance on the farm. That approach works, however, because they discussed it together first. Some days they don’t talk. His son focuses on sheep, Blain on cows. “Our goals are very similar. We believe in the same things on the land,” Blain says. “But day-to-day operations, it’s better if I let him do his thing and he lets me do my thing. There’s nothing wrong with that, that’s just the way we are. Every person is different. But you need to recognize what your style is and how you can make it work. You need to communicate that.”

Equal Is Not Equitable

In the last few years, Blain and Naomi hired an expert to help plan financial succession. The expert created a plan with complete liquidation, and projected living expenses until Blain and Naomi are 94. This gave them a starting point with their assets and retirement needs. “A lot of people have the idea that if they have three kids, each one gets a third,” Blain says. “That’s equal, but that may not be equitable. What will happen in the end is that our oldest son and daughter-in-law will end up owning a $1.5 million operation for about 40 to 45% of its value, plus all of the years of sweat equity they have put in. My other son and daughter will receive the retirement home plus any other assets we still have when we pass on.”

Because Naomi worked off-farm during Blain’s farming career, she has a good government pension, which has let them set aside about $300,000 in investments not involved in agriculture. “We can use this for retirement,” Blain says, “and it makes it much easier to do a succession plan.”

Over the past 12 years, Blain’s oldest son and daughter-in-law have grown their net worth while using family land and facilities. Blain and Naomi recently purchased an off-farm lake home to retire to. “We’re still going to have roughly $75,000 a year in annual income,” Blain says. “I’m not giving them the cows, but I’m going to let them use our cows to give us annual payments on calves.” For tax reasons, Blain wants to own the cows for the next few years, but he will no longer handle daily management. “They will manage the cows,” he says, “and if they get 30 calves a year, they will pay us those 30 calves a year, plus an annual payment for the rest of the farm.”

While Blain’s farming son and daughter-in-law will need to borrow some money, he believes this is reasonable and fair. “One of the biggest wrecks I’ve seen is when people have everything given to them,” Blain says. “They don’t appreciate it, and in 10 years it’s gone.” Is this equal? “No,” Blain says. “If you look at the money, the oldest son and his wife get more in the long run because they’re buying an asset at a lot less than full cost. But they’ve put in sweat equity.”

Every Situation Is Different

While Blain generously shared his family’s succession experience for others to learn from, he stressed that his experience is just one way to go about farm transfer. “Don’t assume this is the right way,” he says. “I just share it as an example of how we have done it, and I believe it will work. There’s as much creativity as you have in your brains as to how you can do it.”