Farming for the Future

The award is given each year by PFI to an individual or couple that has shown exemplary commitment to sustainable agriculture, generously shared their knowledge with others and been influential in efforts to foster vibrant communities, diverse farms and healthy food. The award ceremony took place on Saturday, Jan. 18, during PFI’s 2020 annual conference. 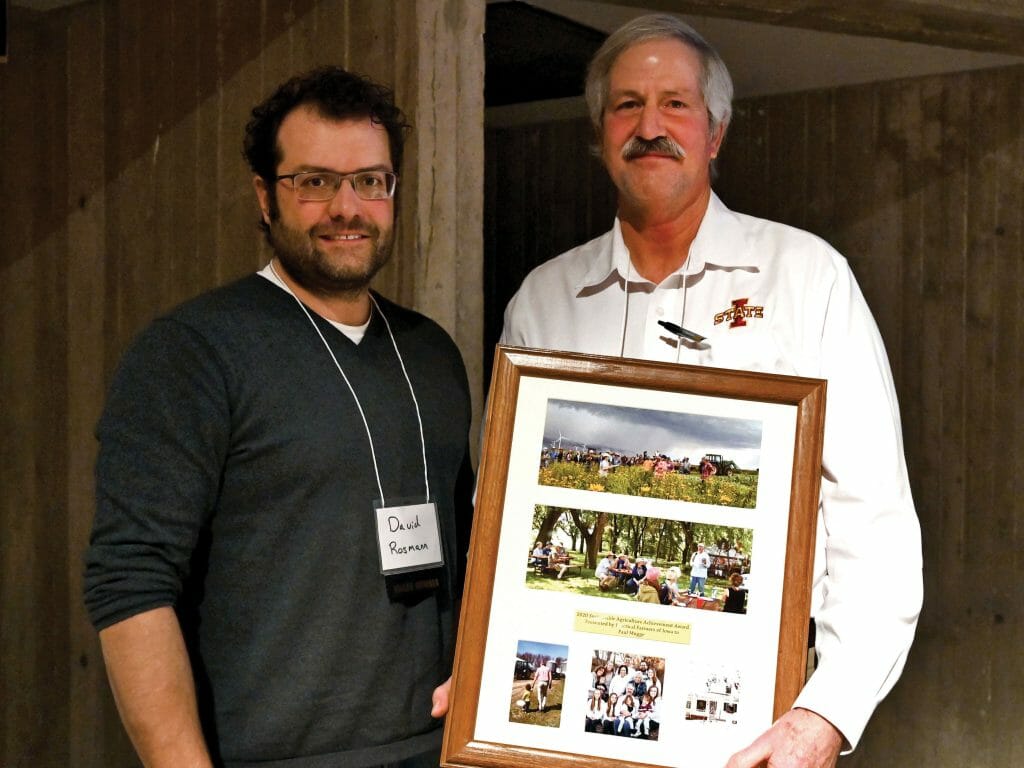 Paul Mugge has been a PFI member for more than 30 years. He and his wife, Karen, farm 300 acres of certified organic crops. Their rotation consists of corn, soybeans, small grains and some legumes. The farm has been certified organic since 2001 and features a mature, 17-year-old restored prairie; prairie strips established in 2015; and a beetle bank installed with Xerces Society in 2018.

“Paul is a farmer and a scientist who is always working to improve his land,” says David Rosmann, a farmer and PFI board member based in Harlan, who presented the award during the conference.

“Paul stands out for his dedication to on-farm research with Practical Farmers of Iowa, going back to the beginning years. He’s such a humble, kind guy who’s never thought ‘my farm is better than your farm,’ and he has always been open and welcoming to anybody coming to his farm, and to making his land and research available to other farmers to learn from.”

In 2013, Paul received Practical Farmers’ Master Researcher Award in recognition of his long-term commitment to conducting on-farm research and sharing the results with others. To date, he has conducted 65 on-farm trials – a PFI record that has yet to be bested – and hosted 22 field days on his farm over the years.

His most recent field days include two events he hosted last summer exploring his work establishing prairie and beneficial insect habitat, and organic row crop production and mechanical weed control on his farm. Paul also served on PFI’s board of directors from 1990 to 1998, and has been active in leadership and volunteer roles with many other organizations over the years.

In October, Paul was selected as the recipient of the Leopold Center for Sustainable Agriculture’s 2019 Spencer Award, which recognizes farmers, researchers and teachers who have contributed significantly to the environmental and economic stability of the Iowa farming community.

In a letter supporting Paul’s Spencer Award nomination, PFI Executive Director Sally Worley said, “Paul has a long-term vision for the farm where profit and stewardship are mutually inclusive . . . . Paul’s farm is a wonderful example of what is possible on Iowa’s landscape.”

In his acceptance speech at the conference, Paul reflected on the influence of other early members, PFI’s progress and the challenges we still have to face, which motivate his decisions on his farm:

“Thirty years ago when PFI was young and just getting started, we had maybe 20 members. We had Dick Thompson and Larry Kallem, Ron Rosmann and Tom Frantzen, Vic Madsen and Jeff Olson – and a lot of those guys are here today. Those guys deserve this honor. I have tremendous respect for all of them. They were ahead of their time, visionaries – and we still have those kind of leaders at PFI. I don’t think we realized at the time that PFI would grow like this.

“There’s a lot left to do. I don’t want to be a Debbie Downer, but we’ve got a hypoxic zone in the Gulf of Mexico the size of New Jersey some years. The Mississippi River still delivers to the Gulf of Mexico a dump-truck load of soil every second, 24/7. We have some of the highest phosphorous levels in our surface waters of anywhere in the world . . . . We can do better than that – and I think we well. Having said all of that, this is still the best place in the world to raise kids, and PFI deserves a little bit of credit for that.”