Adding small grains to crop rotations for use as dairy feed sources comes with all the benefits typical of having small grains in a crop rotation – more ground cover year round, reduced weed pressure and dispersed labor throughout the growing season – but it also allows dairy operations to cheaply increase their feed tonnage on the same amount of land. 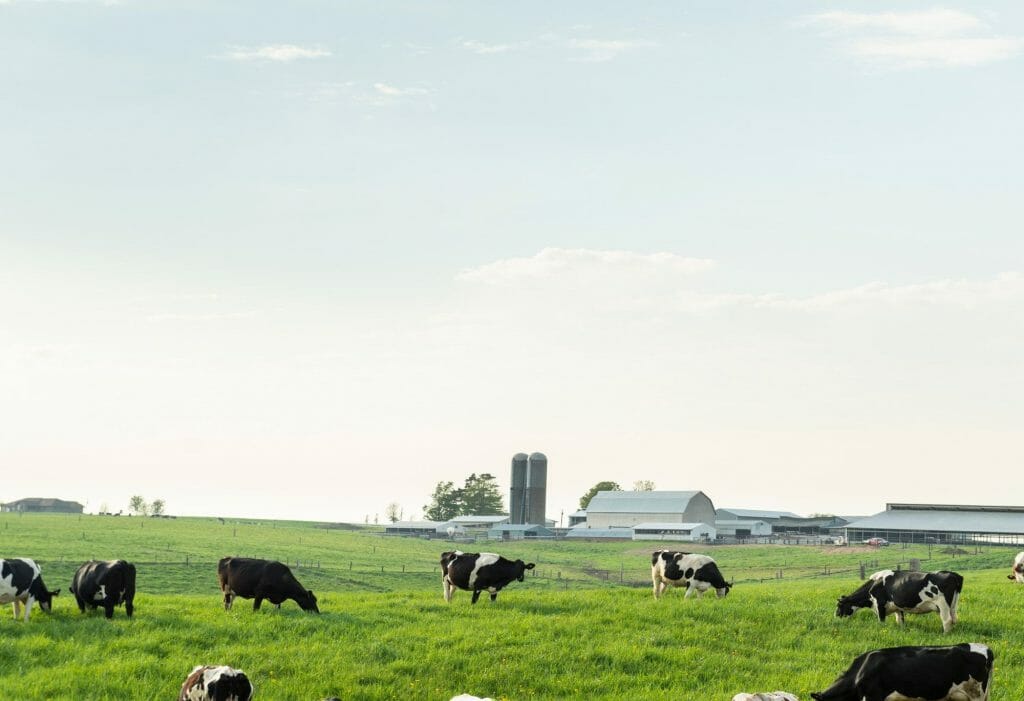 Tranel Family Farm increased their tonnage production by nearly 60% per acre by using winter small-grain crops like rye, winter wheat and triticale followed by summer annuals rotated with corn, all while dropping their feed price from 10 cents to 12 cents per pound of dry matter because of the superior digestibility of the forages.

On our August shared learning call Josh Tranel joined us to share his experience with these feeds and crop rotations that he and his family employ at their 500-cow, organic dairy in southwest Wisconsin. Josh and his family manage 1,800 acres of land, of which roughly 1,400 is in crops and 400 is in pasture.

Making the Switch to Small Grains as Forage

Up until five or six years ago, Josh and his family were primarily using a rotation that included one year of corn silage and four years of alfalfa for forage on their crop acres. “We weren’t really satisfied with rotations of corn silage and alfalfa because it was taking us too long to get back into a corn stage,” Josh explains.

Around that same time they were growing their herd from 100 to 500 cows. They needed the ability to grow more feed on the same number of acres and the longer rotation wasn’t cutting it. The alfalfa itself was also sometimes problematic – Josh noted that their farm has struggled with winter kill in the last few years and there was high weed pressure during the alfalfa seeding year after they cut down the nurse crop. Switching some of their acres to rotations that were shorter, but included a small grain, allowed Josh and his family to grow more corn cheaply and to take advantage of a larger number of growing windows throughout the year. 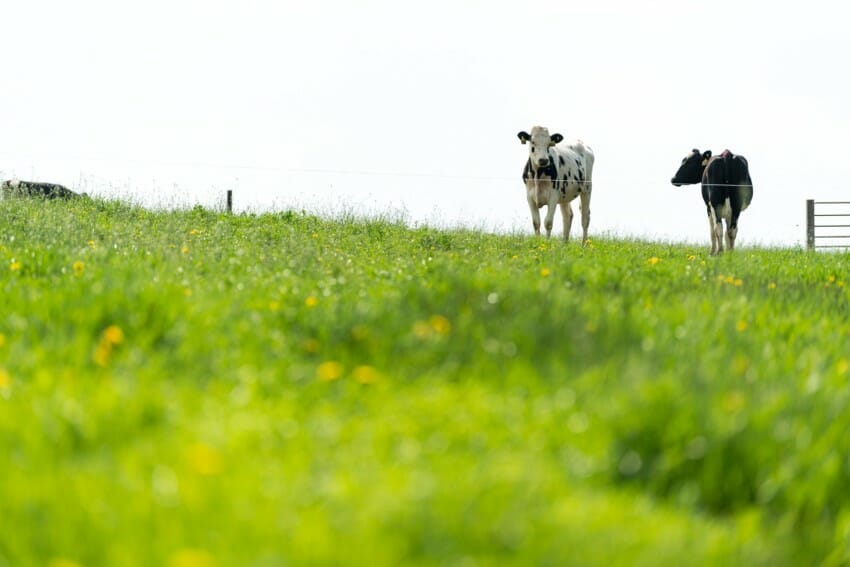 Adding small grains to the rotation also allowed Josh and his family to increase their flexibility, their total dry matter tonnage and simultaneously decrease their risk. “Most of the time [small grain] seeds are pretty cheap,” Josh explains, “it takes some risk out of establishing alfalfa stands and expecting the alfalfa to make it through these winters.”

The Who’s Who of Silage Crops

Josh and his family started their foray into small grains with cereal rye as a cover crop and then began using it for heifer feed. While the rye was high yielding, it has its limitations. “The big problem we didn’t like was that if you missed [the rye harvest window] the feed quality went pretty bad and we couldn’t use it in our dry cow rations,” Josh explains.

So they expanded what small grains they were using, starting by trying each as nurse crops for their spring alfalfa seedings. By using multiple small grain crops, which vary in their strengths and weaknesses, the farm gains the flexibility to plant what makes sense given weather conditions and previous crops, for instance.

Josh and his family still use rye quite a bit since it’s so reliable. “If you get it in the ground it will grow at some point,” says Josh. Its high yield potential and its ability to grow a thick stand and suppress weeds means it won’t be going away from the farm anytime soon. The downside of rye is that it can be hard to kill without heavy tillage or chemicals – which Josh’s organic operation can’t use – and that the quality of the feed can deteriorate quickly.

Oats were the second small grain that Josh and his family started feeding their cattle. “The best thing about the oats is that they have a lot of early season forage growth,” explains Josh. Oats provide a cheap nurse crop and they can serve as great stored forages. Josh notes that if they were further south they would plant more oats in August or September for fall grazing.

Triticale, either winter or spring sown, is Josh’s favorite of the small grains. It has a great yield and feed quality potential – it’s a very digestible forage. The issue is that winter triticale needs to get in the ground early in order to have good growth the next spring. Josh notes that “if you’re not getting your corn silage or your beans out in time it’s probably not the best option compared to rye.” Josh and his family try to seed winter triticale if they can get their corn silage off early enough. They will also use spring triticale as a nurse crop for their spring-seeded alfalfa stands if they don’t want to use oats.

Josh likes winter wheat because “It has a great winter hardiness and it’s easy to kill off for the next crop.” Winter wheat can be grazed or chopped, although in Josh’s case they are usually chopping it. Winter wheat is also slower and later to mature and doesn’t suffer from the same feed quality deterioration that they see in rye. This doesn’t mean it’s without any drawbacks. “It has a little bit lower yield potential,” says Josh, “and it needs to be in early.”

Josh and his family started growing sorghum mixes about five years ago to break up their corn-on-corn rotations. While they were using cover crops in between the yearly corn, they found the weed pressure was getting to be a headache. Sorghum and sorghum-sudan grass mixes planted in mid-summer after a small grain allowed them to maintain high yield tonnage while breaking up the weed cycles. Just this year Josh started experimenting with cover crop cocktail mixes that contain sorghum-sudan grass, Italian ryegrass, and clover so that they’re able to get multiple cuttings and growth through the fall.

As for harvesting these different forages, it’s easiest for Josh and his family to cut, merge and chop everything. They cut all crops to 3 to 4 inches off the ground to avoid getting any wet soil into the feed, and they typically bale their rye and their triticale. “[The sorghum-sudan grass] is a little bit tougher to bale” explains Josh, “the bottom of those stalks the cows don’t like as much, but if it runs through a chopper they have a really hard time sorting it out so they’ll eat it.”

Matching the Silage With the Animal 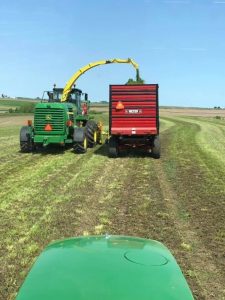 With all these different forage options, it’s important to keep in mind the animal group you’re feeding, since that may change factors like harvest timing. Josh and his family try to harvest most small grains at the boot stage, which works well for feeding their lactating cows. These small grain silages can replace corn silage if they’re mixed with some heavier grain rations. “If you take the grain portion out of a corn silage chop and send that through a feed test it looks very similar to triticale,” Josh notes. For later lactating cows the small grain inclusion rates can be up to 20-25 lbs of dry matter. “Because they are so much more digestible than the alfalfa we can actually get our total pounds of dry matter intake to come down and cheapen up the ration,” explains Josh.

For heifers Josh does harvest some small grains at the milk stage every now and then. If the silages are harvested correctly, then they can make up the entire heifer rations in the winter. If Josh needs to supplement with grain, it’s usually 2-4 lbs inclusion rates. Josh says he religiously avoids spring harvested forages for their dry cows. They bring up too much potassium. They were, however, able to feed their dry cows some wheat silage this year and are pleased with the results.

No matter which small grain you’re feeding as silage, it’s going to have a higher fiber than corn silage or alfalfa. Josh also cautioned about being mindful of ash content with any of these forages. If ash gets too high, they can’t feed the silage to lactating cows or heifers.

Matching the Rotation With the Land

While Josh is pleased with their increased use of small grains and summer annuals on their crop land and in their feed rations, their farm hasn’t done away with alfalfa. Quite the contrary, they vary the crop rotation based on the distance to the farm and the weed pressure. Fields closer to the dairy are usually in a corn—small-grain—summer forage mixture with manure added.

If the weed pressure in those fields gets bad, then they might convert them to alfalfa for a few years. Fields that are further away or on poorer ground may stay in the original five-year corn silage-alfalfa rotation or get more clovers in their summer cover crop mixes to plow under and use as green manure. Again, flexibility and diversity are key to making these rotations work on a variety of fields with varying distances to the farm.

Lastly, for those of you thinking about tillage, the two-year rotation of corn with a small grain and sorghum-sudan grass does take some light tillage every year. However, the alfalfa needs to be moldboard plowed every five years and that can take up to four to five passes. Like many decisions, it’s a balance: more frequent, lighter tillage versus heavier tillage, less often. For conventional operations it’s possible that some of these rotations could be no-till.