Livestock on the Land

By Sarah Krumm and Nick Ohde 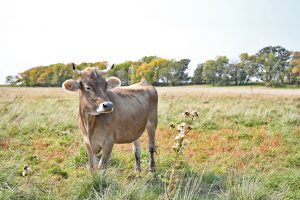 Tica, 4, looks up from a meal on Lost Lake Farm, owned and operated by Kevin and Ranae Dietzel. Tica was born on Gibralter Farm, run by the Gilbert family, who are fellow PFI members and good friends of the Dietzels.

In 2017, we started out on a journey to tell the story of regenerative grazing and its promise for the Iowa landscape. As we talked to more and more PFI farmers about the animals that made up the backbone of their farms, we realized we were onto something bigger – and more complex. High-tensile fences and electro-netting, mob grazing and manure packs, small grains and silvopasture are all part of it. But focusing on these innovative practices obscures the most important part of this story: It’s all about the people.

Our late co-founder Dick Thompson had something to say about this. He said it many times and in many ways, but the premise was the same: When cattle leave the farm, the people leave and the community begins to crumble. While livestock can work wonders for protecting soil, cleaning the water and even providing habitat for the birds and bees, at their core, they reveal things about ourselves and each other.

Meg Schmidt, who farms in southwest Iowa, says livestock teach us many life lessons. “You have to deal with things not going right when it’s most inconvenient,” says Meg, who is one of the farmers we interviewed while making PFI’s forthcoming film and mini-series, “Livestock on the Land.” “You learn to really love something, but then you also have to learn to let it go.” Livestock teach children the values of care, hard work and humility, and those values stick with them whether they stay on the farm or not.

Raising livestock also requires cooperation, whether it’s building fence with your grandpa or calling the neighbors when the cows get out. Anyone who has worked pigs with their elders can tell you it’s not always fun. But nor are many things of value. While livestock can strain relationships with our spouses and families, the stress can also forge deeper bonds. Livestock brings us together.

Those who raise livestock must also be independent. Often, their only company early in the morning or late at night is the animals they tend. That comfort in solitude helps livestock farmers go against the grain, living up to Dick Thompson’s other adage: Get along, but don’t go along. 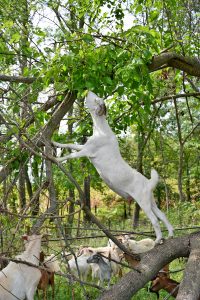 One of Adam’s goats showing her athletic abilities.

But perhaps more than anything, caring for other animals pulls at our heartstrings. The connection between people and farm animals is not so easily quantified. It’s difficult to assign a number to the value of a child caring for a bottle calf or a flock of hens. Livestock pull us to our homes – new and old – here in the Midwest, from places as far away as Colorado and Florida, San Francisco and Long Beach, Laos and Guatemala, and from the city back to the farm.

Here’s a sneak peek into the lives of a few of the farmers we visited while making the forthcoming film, which will premier on the opening night of our 2021 annual conference.

An ecologist and conservationist at heart, Adam Ledvina has built a business from his Chelsea, Iowa, farm that uses goats to manage forests. In many Iowa woodlands, invasive species like honeysuckle and multiflora rose have taken over woodlands, preventing diverse wildflowers and grasses from thriving. Because goats naturally prefer to browse for their food – meaning they like to strip the leaves off of shrubs and even trees within their reach – they can be managed to strategically eliminate invasive species from woodlands. This innovative strategy lets Adam help landowners improve their woodlands, making them better habitat for wildlife and, ultimately, better places to spend time outdoors. 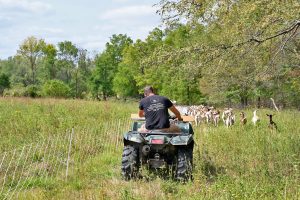 Adam Ledvina moves his goats to a new paddock on his farm near Chelsea, Iowa. 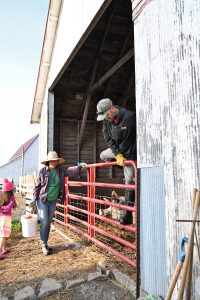 Wendy and John feed and water the pigs, while their daughter Vivienne looks on.

Wendy Johnson met her husband, John Rafkin – a surfer from Long Beach, California – while she was living in Los Angeles, working in the fashion industry. They bonded over raising food and a love for animals, and moved back to her family farm near Charles City, Iowa, about 10 years ago. Together, they have created a farm business – Joia Food Farm – selling healthy food to their community.

Wendy and John raise sheep, pigs, chickens (broilers and layers), turkeys and ducks; and organic corn, soybeans, small grains and pasture with an eye toward conservation. Before landing on enterprises that suit their farm, they experimented with raising just about everything. Since starting the farm, working together on their day-to-day business has strengthened their relationship and convinced John that it was a good idea to move to Iowa – in spite of the winters. 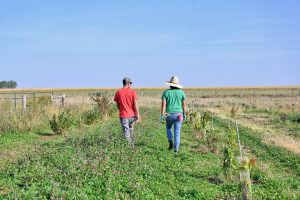 Wendy and John walk through their future orchard and riparian forest. The couple looks forward to being able to harvest fruit and nuts, and to enjoying the wildlife they hope the forest will attract.

After returning to the family farm in 2011, Martha McFarland has gradually taken over management of the Fredericksburg, Iowa, farm from her dad, Dan. The McFarlands raise bison and purebred Polled Hereford breeding stock at Hawkeye Buffalo Ranch. They’ve been in the breeding stock business since the 1950s, while Dan added the bison business in the 1990s. After college, Martha left to see the world, teaching English in China, then Colorado throughout her 20s. Since coming back, Martha has built on the farm foundations laid by her dad, adding the knowledge she gained when living away from the farm. While most of the farm has always been in perennial vegetation, she has looked to incorporate practices like rotational grazing, bale grazing and silvopasture to produce better forage and heal rough spots on the land. 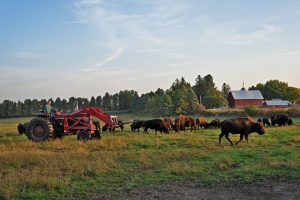 Martha unrolls some hay bales for her bison on an early autumn morning on her farm near Fredericksburg, Iowa.

Kevin Dietzel and his wife Ranae run Lost Lake Farm near Jewell, Iowa. They not only manage a 100% grass-fed dairy herd, they have built an on-farm cheesery where they produce artisan cheese, the majority of which is sold within 60 miles of the farm. Kevin spent time learning the craft of cheesemaking in Europe, where the flavor of the place – terroir – is an important element of food culture, and consumers are willing to pay the farmers and cheesemakers for it. By carefully tying the needs of the cattle to the needs of the land they farm, the flavor of central Iowa is expressed in the cheeses the Dietzels produce. More importantly, this value-added enterprise allows them to farm the high-value farmland near Ranae’s family with a small-sized operation. 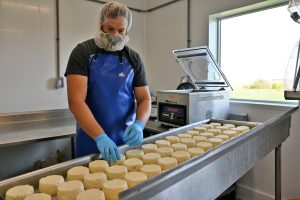 Maytag isn’t the only blue cheese in Iowa! Kevin’s Lost Lake Blue has become a customer favorite. Here, he sorts through wheels that are bound to be injected with the blue cheese mold. 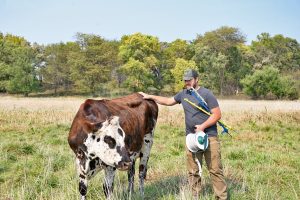 Kevin sets up electric fencing on his pasture, which sits in the now-dry lake bed of Lake Cairo and served as the inspiration for the name of their farm near Jewell, Iowa.

Nick Wallace’s vision for Iowa is inspired by the thriving Keystone, Iowa, main street of the 1950s and ‘60s his dad grew up around. On Saturday nights, Main Street – which included a grocery store, theater, bowling alley, restaurants and a community hall – was bustling with kids and adults, who came into town to see friends and family. Nick is a farmer who lives with his family near Keystone, but he’s an entrepreneur at heart. In the early 2000s, he started a grass-fed beef marketing and distribution company that taught him the ins and outs of the business world, and opened his eyes to large shifts in consumer demand.

Nick is also a fighter who has channeled personal adversity to keep him focused on working toward what he believes in: At just 43 years old, he has already fought through cancer and a snowmobile accident that nearly killed him. Nick’s next business idea is his biggest yet: He aims to help farmers capture more of the agricultural value chain by investing in meat, market farmers, mills and main streets across the state. He calls it 99 Counties, and hopes it can be a healthy path forward for Iowa farmers and communities struggling for a way to stay on the farm. 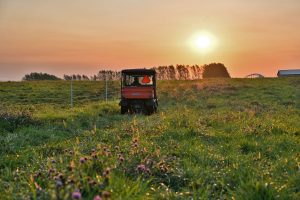 Nick heads back home from doing morning cattle chores. The sun is partially obscured by smoke from California wildfires on this otherwise clear September morning. 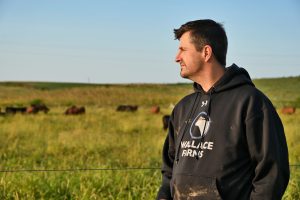 Nick watches his cattle graze on an early autumn morning.

Don’t miss the opportunity to hear and see some of these stories, and more, with your PFI family on the opening night of the PFI conference, Jan. 21, 2021.