Paving the Way for Diversity

In the late 1990s, many pig farmers in Iowa were losing money. Over the preceding decades, the hog industry had become far more efficient and productive than previous generations of farmers had experienced.

The scale of pork production had been increasing, and many farmers couldn’t compete with the low prices and profit margins. Nearly overnight – from 1997 to 1998 – hog prices dropped from $46 per hundred-weight to $17 per hundred-weight. Many smaller farmers simply got out of the business.

“The industry was holding meetings and telling us to get bigger or get out,” says Paul Willis, who raised pigs near Thornton at the time. “It was all about things like pigs per sow per year. If you asked them about eating quality, they would look at you like, ‘What are you talking about?’” Paul noticed that there was a market for free-range chicken, for which consumers were willing to pay a premium. Paul started to pursue this on his own, but found out that people didn’t realize he was raising whole pigs, not just pork chops. “I had to find someone willing to buy the whole animal,” Paul says. 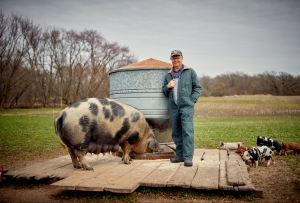 While in California visiting his sister, Paul met up with Peace Corps friend Jeannie McCormack, who had found a good market for her lamb through Bill Niman. Bill was supplying meat to San Francisco Bay-area restaurants. Jeannie arranged for Paul and Bill to have lunch. Over a burger made from Bill’s beef – the best hamburger Paul says he’d ever had – Paul learned about Bill’s cattle operation and small processing and distribution company, Niman Ranch. Bill was lacking a good pork supply and asked Paul to send him a sample. “I went home, took some pork out of the freezer and shipped it to California,” says Paul.

Bill circulated Paul’s pork to his chef clients, including the acclaimed Chez Panisse chef Alice Waters, and it was a hit. “They loved the sample,” Paul says. “I was raising farmers’ hybrid hogs. They were hardy outdoor pigs with a great eating quality.” His pork contrasted with most other pork available on the market at the time, which had moved away from eating quality to efficiency and competing with chicken as “the other white meat.” From there, the pork branch of Niman Ranch – and a new market for small- to mid-scale hog production – was born. Paul shipped 30 pigs in February 1995 to California. In a couple of weeks, they wanted 30 more. Incrementally, demand creeped up and the market required continuous supply. Paul first branched out to his neighbor, Glen Alden. Niman Ranch has a numbering system, and Paul is producer #1. Glen was #2. “Glen did some winter farrowing and summer farrowing,” Paul says. “He was able to fill in when I didn’t have supply.”

“Niman Ranch creates an opportunity for diversified agriculture. It also creates a place where you can get into farming without much startup costs.” – Paul Willis

Rex Thompson of Boone, son of PFI co-founders Dick and Sharon Thompson, was #3. Dan and Lorna Wilson, of Paullina, were #4. In 1998, Niman Ranch Pork Company, LLC, officially formed. Half of the business was owned by farmers. “When you sold a pig, you would invest a penny a pound into the company as equity and Niman Ranch matched it,” Paul explains. By doing this, the company raised operating capital. When farmers retire, they are able to request their money back and receive 100% of what they invested.

Today, there are more than 600 farmers selling to Niman Ranch Pork Company. The premium price the company pays – which has always attracted producers – started at the beginning of Paul and Bill’s relationship. “Bill asked, ‘What do you want for your pigs?’ Nobody had ever asked me that before,” Paul says. Together, they came up with a price that worked for the farmer. During the hog crisis that drove so many out of production, Niman’s prices were able to keep farmers in business. “Many farmers tell me if it wasn’t for Niman Ranch, they certainly wouldn’t be raising hogs, and in many cases they wouldn’t be farming at all,” Paul says.

Paul envisions an Iowa countryside filled with diversity and farmers: “Diversity is healthy. What evolved here is the tallgrass prairie, loaded with species of plants and animals. Monocultures are bad for the soil, for pest pressure and for rural economies. Niman Ranch creates an opportunity for diversified agriculture. It also creates a place where you can get into farming without much startup costs. We need more farmers, which requires viable opportunities to enter into farming.”

“Niman’s vision of raising pigs on pasture is what Dan’s dad had done for generations. Their whole concept meshed with our values of how we wanted to raise animals. We were really connected to their philosophy of treating animals with respect.” – Lorna Wilson

Paul joined PFI in 1995 and used the network to connect with many hog producers. “After I found the market, I had to look for farmers to increase supply,” he says. “Where do you find them? PFI was one of my top sources from the beginning.”

One family Paul connected with through PFI was the Wilsons of Paullina. Dan and Lorna Wilson credit Niman with keeping them in pig production. “We met Paul through PFI in September of ‘98, right at the bottom of the hog market,” Dan says. “Paul called and asked if we had any pigs ready.” Lorna was skeptical at first because the bottom had dropped out of the market and it seemed too good to be true. But the Wilsons pursued the opportunity, sending pork chops to Bill Niman for quality testing. The chops passed snuff and the Wilsons sold Niman 12 pigs. “Niman was paying forty-three-and-a-half cents a pound, when we were getting 8 to 10 cents a pound from our normal market,” Dan says. “We were ecstatic that this was even a possibility.”

“Niman’s vision of raising pigs on pasture is what Dan’s dad had done for generations,” Lorna says. “Their whole concept meshed with our values of how we wanted to raise animals. We were really connected to their philosophy of treating animals with respect.” The Wilsons’ systems was already set up in hoop houses. “We met all the protocols and it was an easy transition,” Dan says. 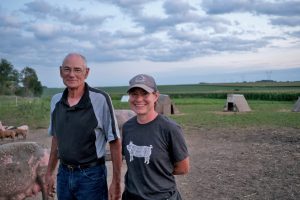 Dan and April Wilson on their farm near Paullina, Iowa. Raising hogs for Niman Ranch has allowed April to return to the farm.

“Without the diversity we have with our livestock and crops, there’s no way we could have four families full-time on this farm.  – Dan Wilson

If Niman hadn’t come into the picture when it did, Lorna says, “We would have just quit producing hogs. Niman’s the reason we were able to stay in.” Additionally, Dan says, “Niman is the only reason that [our daughter] April was able to come back and farm with us.” Five-and-a-half years ago, having the Niman enterprise provided income for April to come back. “Our pork enterprise provides April with a sense of ownership,” Lorna says. “She gets all the communication and makes her own decisions.”

Pigs, of course, are only part of the story. Dan credits the diversity of their farm as a whole in allowing their kids to come back. “Without the diversity we have with our livestock and crops, there’s no way we could have four families full-time on this farm,” he says. “If we were just straight corn and beans on our 720 acres, there wouldn’t be enough income for our kids to come back and farm as well, even with organic crops and prices.”

Diversity is exactly what Paul was envisioning when he started Niman Ranch’s pork division. Reliable markets for a range of crops are key to paving the way for farmers to be able to diversify, and Niman is providing just that. Niman’s average farmer age is 42-43 years old, compared to Iowa’s average farmer age of 59. “I feel that the average age of our farmers is a good indicator of creating health in the rural environment,” Paul says. “You have younger people coming back because there’s an opportunity.”

The Wilsons and Paul both challenge farmers to work toward diversity. Lorna invokes an old adage to explain the philosophy: “Don’t put all of your eggs in one basket. Having multiple enterprises and plans is key to being able to continue to farm, and to bring family members back.” That’s not to says it’s easy. “There are days where your brain is tired from keeping it all afloat,” Dan says, “but diversity works.”

Paul agrees: “Think outside the box a bit, and specialize in things like organic, fruits and vegetables, different kinds of livestock, or even small grains. Diversity provides opportunity. Diversity means you don’t have to have thousands of acres to make a living in agriculture. That’s where I see agriculture heading in the future.”