Tom Wind grew up on his family’s century farm south of Jefferson. The 160-acre farm has been in Tom’s family for about 150 years – it was the first farm his ancestors came to when they were settling down in the area.

This long family connection with the land, and the fact that he has spent so much of his life there, is a source of pride for Tom. “All you have to do is plant a seed and it will grow,” Tom says of Iowa’s fertile farmland. “I’m lucky that my ancestors settled in Iowa 145 years ago, and to have inherited a little of this lush, green, verdant farmland. That puts me in a very exclusive club in the world. I figure I am not in the top 1%, not in the top 0.1%, but in the top 0.03% of people owning something as precious as the best farmland in the world.” 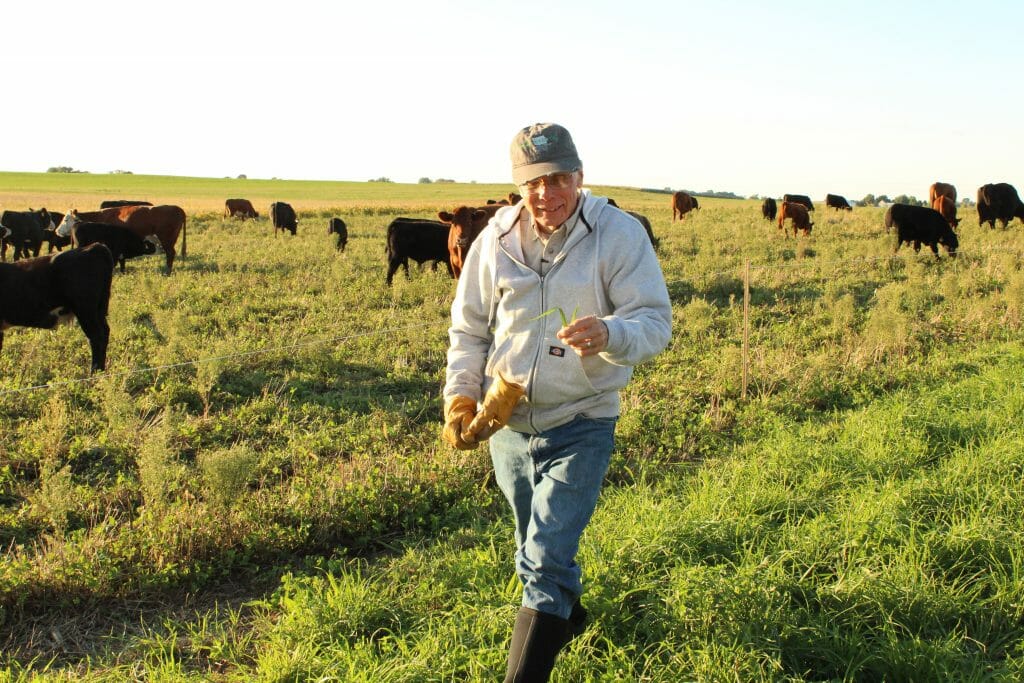 Leaving a Legacy of Healthy Soil

Around 30 years ago, Tom farmed conventionally for six or seven years. After that, he left the farm, worked in the wind industry as an engineer in Iowa and paid little attention to the farm. As he got closer to retirement, he realized he needed to stay healthy and get some exercise and fresh air. About 10 years ago, those concerns led Tom to start the process of reconnecting with his family farm. He started getting more involved with corn and soybean production on the farm, alongside his sister, Janet Dewan.

But as he got more involved, Tom started thinking more about the legacy of land stewardship he’d leave. He had heard many farmers express their wish to leave the land better than they had inherited it, and he felt an obligation to take care of the farm that had been so productive for multiple generations of his family. But he says he started to think more about what it actually meant to leave the land in better shape. 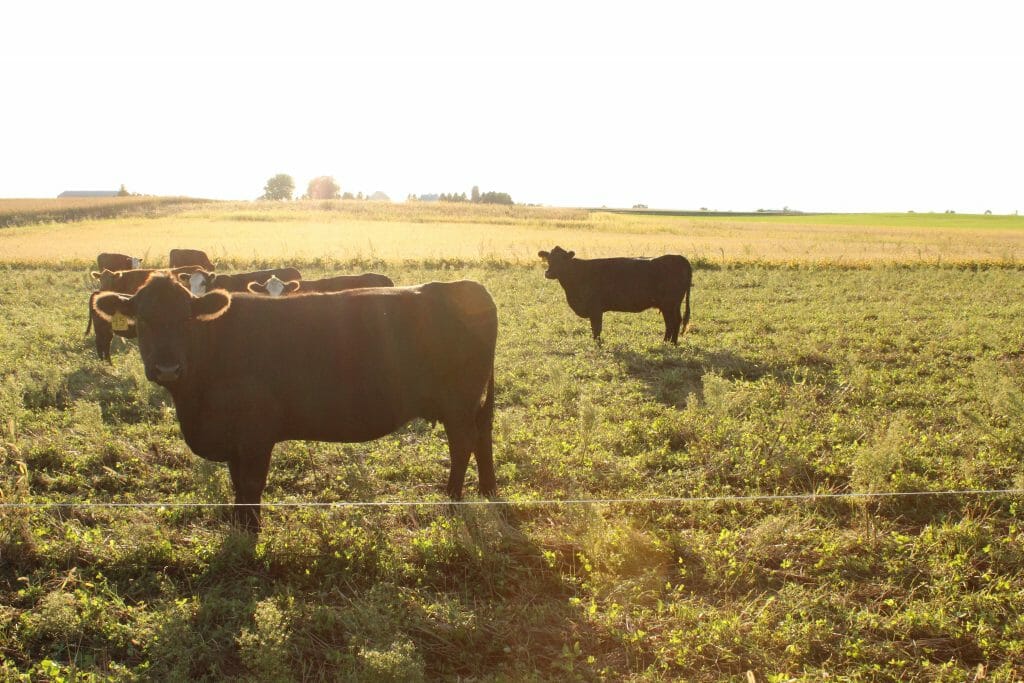 For Tom, the condition of his farm’s soils provided a meaningful gauge, and he started paying more attention to the soils in different areas of his farm. “I noticed that the less productive areas were made of very thin soils, and they produced very little crop,” Tom says. “The soil was poor, exposed and could easily be eroded.” Being a natural tinkerer and eager to experiment, Tom started exploring what he could do in his lifetime that would make a difference in the quality of his farm’s soils.

About seven years ago, Tom started getting involved with Practical Farmers of Iowa. He went to his first PFI conference in 2014, where he attended a session led by Gabe Brown, a renowned integrated crop and livestock farmer from North Dakota widely regarded as an innovator and expert on cover crops and soil health. “Gabe was the first person who said ‘Yes, you can put carbon back into the soil much quicker than a hundred years,’” Tom recalls. “And his secret was incorporating livestock onto the farm.” The advice immediately resonated for Tom. “The problem,” he says, “was that we hadn’t had livestock on the land in probably 50 or 60 years.”

Though Tom didn’t have livestock or expertise in animal husbandry, he knew that one of his neighbors, Jim Funke, had some cattle. About four years ago, Tom approached him with a proposition: What would Jim think about an arrangement where he grazed his cows using cover crops planted on Tom’s land and moved them based on the soil needs of different areas? Jim agreed, and the neighbors have been working together since, closely monitoring the soil.

Tom explains that the five principles of soil health include putting “armor” on the soil – meaning, keeping it covered; having diverse types of plants; having living roots in the soil as long as possible; integrating livestock; and minimizing soil disturbance. To adhere to these principles, Tom and Jim created a plan that would benefit both partners as well as the soil. Tom agreed to plant forage crops for the cows to eat, and Jim agreed to run his cattle over Tom’s land a few times a year. With their sustained presence, the cows would hopefully bring the soil back to life through manure, urine and hoof impact.

During their first year, Tom took his land out of corn and soybean production and instead planted annuals for the cows to eat. “We were really disappointed in the forage that year,” Tom says, “but kept mob grazing a couple times a year.” Tom and Jim have continued this practice for about four years now, and Tom says 2020 has been the first year they have seen a difference in the soil. Both men are excited to see how areas with formerly poor soil are now producing all types of forage. “I realize that it would be easier for everybody just to keep on doing corn and soybeans on that land,” Tom says. “But it wouldn’t be fulfilling the pledge I made to leave this farm better than when I inherited it, when I came on this Earth.”

Tom is not the only one benefiting from the arrangement. Jim needed a place to run his cattle, which Tom’s land provides, and Tom is able to help manage and move the cattle, easing some of the burden on Jim.

“Ever since I’ve had cattle, I’ve always had to rent pastures here and there – and pasture demand is really high,” Jim says. “Everybody that’s got a few cows wants to rent pastures, and it’s hard to keep a pasture for very many years before somebody else either sells the land, or there’s a lot of land that changes every year. Just to stay in one place is really nice. That’s the biggest thing. It seems like we’re going to have a longstanding relationship that’ll work out for both of us.” 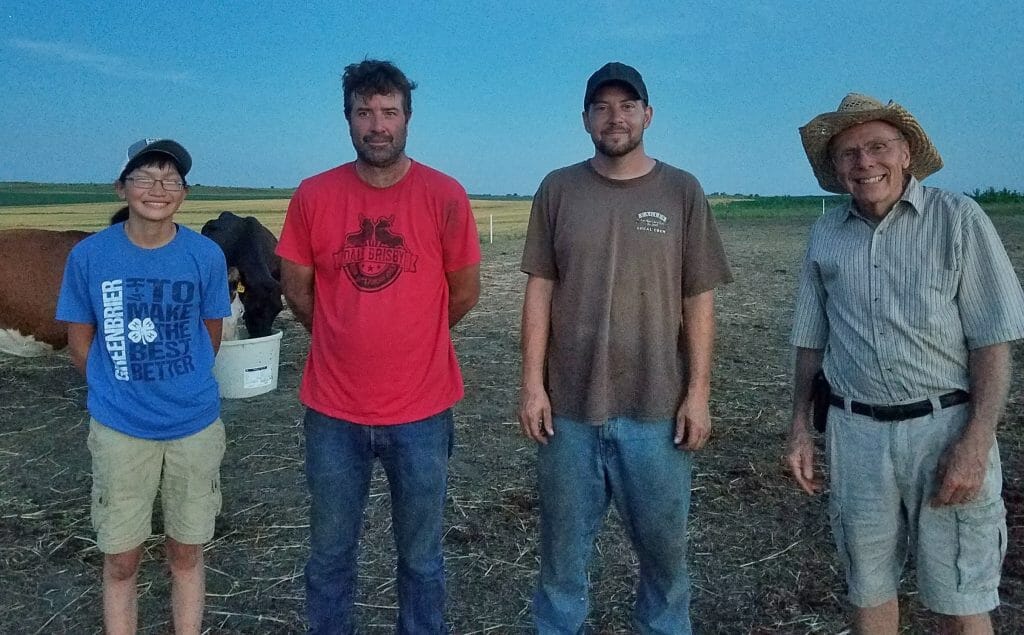 From left to right: Conner Allender, Jim Funcke, Jon Merrill and Tom Wind pose on Tom’s farmland near Jefferson, Iowa. Conner, Jim and Jon are neighbors with whom Tom has been working to integrate cattle, sheep and poultry into his farm’s production system to help improve the quality of the farm’s soils.

Adding a New Generation With Poultry

Tom wanted to integrate other kinds of livestock on his land, too. Last winter, he approached another of his neighbors, Conner Allender. A senior at Greene County High School, Conner raises pastured poultry that Tom thought could further benefit the soil on his farm. She agreed and now keeps 38 chickens in a mobile coop on Tom’s crop ground, moving the poultry to areas recently grazed by Jim’s cattle. Working with Tom has really kick-started her farming career: not only has Conner been able to expand her chicken flock, she teaches her fellow National FFA Organization classmates how to raise layer and production hens.

“It’s been a fun learning experience,” Conner says. “I built a pretty decent egg production business off of it. We sell 10 to 12 dozen eggs right now, and get about three dozen eggs per day. I am hoping within the next few years we will be able to improve Tom’s soil with the poultry, and we should have about a hundred more chickens by the end.” Conner took part, along with Jim, in the virtual PFI field day Tom hosted in June that highlighted how the neighbors started working together. Tom also explained during the field day how he has been working with neighbor Jon Merrill to integrate sheep.

“Ever since I’ve had cattle, I’ve always had to rent pastures here and there – and pasture demand is really high . . . . That’s the biggest thing. It seems like we’re going to have a longstanding relationship that’ll work out for both of us.” – Jim Funke

For Tom, the journey to leave his land better than he inherited it – while keeping active and healthy – has been long but worthwhile. “I am accomplishing my goal of improving my soils. We have a lot of activity around the farm, and I’ve gotten a lot of exercise out of doing this, which is great at my age,” Tom says. “I’ve gotten to know my neighbors better and there is a lot of activity going up and down my driveway.”

He adds: “If I was conventional corn and beans, I would have my tenant here three or four times a year. He would be here on the farm three or four hours, maybe, and gone to the next farm. So [this approach] has brought life to my farm in terms of soil life, plant life and the community. A lot more people come to my farm because of what I am doing here. It has enriched my soils and has also enriched my life.”