As Practical Farmers of Iowa celebrates its 35th anniversary this winter, we remain driven by the same interest in coming together to share information about profitable, environmentally sound methods of farming as when PFI was founded in 1985 by Dick and Sharon Thompson, Larry Kallem, Rick Exner and the first farmers who came together to learn from and support one another.

Yet in 2020, we realize more than ever that PFI is about more than just coming together to share information. We’re wrapping up a year that has been full of hardship, and lacking the face-to-face social interactions that have been such an important aspect of our coming together for the past 35 years. The importance of PFI as a platform to network, socialize and build community was instilled in the organization from the very beginning.

Coming Together at the Thompsons

Long before PFI was conceived, Dick and Sharon Thompson were hosting field days on their 300-acre Boone County farm to showcase their integrated long-term crop rotations, and their cow-calf and farrow-to-finish hog operations. With the help of publicity from Rodale Institute’s New Farm publication, hundreds of people came to the Thompson farm each year. One key individual who found himself at the Thompson farm was Larry Kallem, with the Iowa Institute of Cooperatives. Larry began talking with Dick about starting an organization that could more widely share the Thompsons’ farming methods and coordinate similar efforts on farms across the state.

At the same time, Iowa State University graduate student Rick Exner was keeping bees and conducting his graduate research at the Thompson farm. He and Dick also engaged in regular conversations about different field designs for on-farm research, and about the need for building a network of others doing the same work.

Sharon remembers Dick’s interest in such a network, saying, “He didn’t want to be the whole thing. It needed everybody. He had questions that needed to be answered that he couldn’t alone – and maybe if done in more than one area, would hold more weight with people.” Later in 1984, they began asking around, and encouraged by farmers’ interest, decided to form an organization.

Prior to having an elected board, long-time member Vic Madsen, of Audubon, recalls that Dick and Sharon ran PFI from their kitchen table. “At first Dick and Sharon were PFI,” Vic says. “Dick was president and treasurer, and Sharon was his right hand. When I called Dick in those early days, Sharon would always answer the phone, ask who it was and what I wanted. I teased her a bit about it recently and she asked if I felt I was being screened. We then both had a good laugh.”

Soon a provisional board – including Dick, Sharon, Larry, Rick, ISU graduate student Ricky Voland and Mike Herman, a family friend of the Thompsons – began meeting around the Thompsons’ dining room table to make official plans. Making Practical Farmers of Iowa a reality took the effort of many people coming together, including Larry leading the effort to create bylaws and set up the organization as a nonprofit, and Rick and Ricky founding and producing “the Practical Farmer” newsletter, the publication that has been the voice of PFI members since those earliest years. Even as the fledgling organization was buoyed by many people, the Thompsons helped enshrine and model several of PFI’s values, such as their welcoming spirit and respect for differences of opinion.

“My husband enjoyed people so much,” Sharon says. “He loved being around them and wanted them to feel welcome.” Recalling his time at their farm and those early meetings at the Thompsons’ table, Rick adds, “Dick and Sharon always showed such graciousness and hospitality, which set the tone for the entire organization. Dick loved people. He had social skills till the cows come home. His openness and curiosity fit right in with starting PFI.” 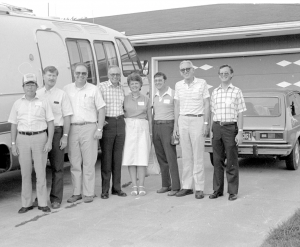 PFI’s co-founders and some of its earliest supporters gather before setting off on the first member recruitment tour in 1985. From left to right: George Moriarty, an advisor with the Iowa Farm Business Association; Larry Kallem; Bill Liebhardt, with Rodale Institute; Dick Thompson; Sharon Thompson; Mike Herman; Wes Buchele, of ISU; and Ricky Voland. Photo taken by Rick Exner

Coming Together Across the State

In the summer of 1985, the members of PFI’s provisional board decided they needed to road-trip around Iowa to promote the young organization and recruit members. “A group of us took [Mike Herman’s] motor home around the state to see if others had interest in an organization like PFI,” Sharon recalls. They published a notice in the May/June 1985 issue of Rodale’s New Farm magazine advertising the July meetings to be held in Denison, Waverly and Iowa City. Interest in learning about cutting costs and boosting profits attracted 200 farmers to the trio of workshops.

At these meetings, Larry stationed himself at a booth to take registrations for the very first members of Practical Farmers of Iowa. At the first annual winter meeting in 1985, five of these members were elected to represent each of the five regions of the state. These board members were encouraged to organize regional activities in the spring, such as field days, to come together and learn about an alternative farm practice and get to know other local members.

Whether it was on the Thompson farm or elsewhere, Dick and Sharon continued to lead by example and help model the values PFI embraced – among them, elevating women as leaders. At the first annual meeting in 1985, for instance, Sharon gave a slide talk on hog production without antibiotics. “I would sometimes do the speaking with the slides,” she says. “It was Dick’s preference for me to be a part of it. So he asked me to, and I would. He thought I had better projection, and that would let him listen and think, and maybe help him think ahead.”

“Dick and Sharon always showed such graciousness and hospitality, which set the tone for the entire organization.” – Rick Exner

Ron Rosmann, a farmer near Harlan who served as one of PFI’s first board members,  reflects, “I remember at the Rodale [field day] presentations, or if [Dick and Sharon] would travel to speak, they would always go together. That was rare.” In her modest fashion, Sharon says, “I filled the role of a supporting wife. I wasn’t the wife who drove a tractor to help with harvest, but I did what I had to do.”

By 1987, PFI had a network of eager members and a system for bringing them together that we still follow today. Thirteen farmers conducted on-farm research that year (read more about PFI’s Cooperators’ Program on page 10), nine of whom also hosted field days that each saw dozens of attendees. The Thompsons capped off the field day season with an on-farm event that attracted 550 people. Rick believes the turnout reflected the hunger farmers had for learning about alternate approaches to farming from the Thompsons and their peers. “When the Frantzens, Rosmanns, Madsens and others would also host field days, you wouldn’t have to drive halfway across the state,” he says, “though a lot of people still did.”

Long-time members like Ron and Maria Rosmann, who have now hosted 24 field days for PFI, learned a lot from the Thompsons, and were inspired by their example of using on-farm research to ground-truth the impacts of farming practices. “I think it all started with the Thompsons,” Ron says. “I remember going to their first field days with Rodale, and I was amazed at their graciousness with just opening up their farm.” As the Rosmanns began hosting field days and attending other PFI members’ on-farm events, it wasn’t just Ron who was eager to come together. “I remember the boys would get so fired up about field days,” he says, referring to his three sons. “They participated in all the field days, just eating it up. They have fond memories of those because it was a family affair.”

Beyond modeling a welcoming attitude, the spirit of information-sharing and their “get along but don’t go along” approach to farming, the Thompsons’ focus on sharing the data collected on their farm, rather than just general observations, was unique and had a lasting impact on PFI. “You would go and observe and you could make informed opinions just from observation,” Ron says. “But it was made more reliable because Dick had the science, the plot work, to give it credibility. All of that had a huge impact on us. I could relate to that, and we tried to do the same.”

Fast forward to the end of 2020, and PFI’s membership has grown to more than 4,500 people. This includes members in 98 of Iowa’s 99 counties, and 41 additional states in the U.S. Our on-farm research program, field day season and annual conference continue to attract more attention to profitable, environmentally-sound methods of farming.

But while many organizations working in agriculture can boast of membership or attendance numbers, what makes Practical Farmers unique is the continuing legacy of Dick and Sharon Thompson’s graciousness, hospitality, openness and curiosity. This legacy is evident in the results of our most recent member survey, in which 76% of respondents reported feeling an increased sense of community through their association with PFI. Even though COVID-19 interfered with our ability to gather on farms this year, we found ways to come together through our virtual field day season – which let us share the spirit of PFI with new people in new places. As we look to 2021, we are inspired by the continued strength and support of the PFI community – and the prospect of coming together on farms once again.