Chris Henning uses precision ag, and close collaboration with her tenant, to take marginal acres out of production

In the 1970s, the U.S. secretary of agriculture at the time, Earl Butz, famously exhorted famers to plant “fencerow to fencerow.” The sentiment at the time, and for decades afterwards, was that more planted acres equals more yield, and thus more profits.

Increasing numbers of farmers are now finding out what PFI farmers have long known – that planting fencerow to fencerow without regard for actual return on investment is not necessarily the best course of action. As new precision agriculture technology and equipment become available, more farmers and landowners are using it to improve decision-making and identify marginal acres. 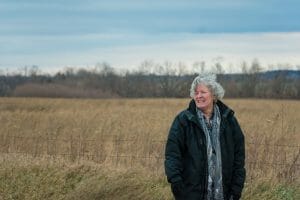 Chris Henning stands by an area of her Greene County, Iowa, farm that she has enrolled in the Conservation Reserve Program. Working closely with her farm tenant, Chris has implemented a range of conservation practices and improved her farm’s yield averages by taking marginal acres out of production.

What they are finding is that small sections of a field, perhaps only an acre or two in size, can be responsible for depressing yield averages across the entire field. Instead of continuing to plant high-value crops in these perennially underperforming areas, many of these farmers and landowners are opting to convert those spots to wildlife habitat. The idea is that by not throwing time, inputs and money at these areas in an often futile effort to make them productive (but never truly profitable), these areas then become excellent opportunities for establishing native habitat and perennial vegetation, providing a whole host of environmental benefits along the way.

Chris Henning is a landowner and PFI member who has embraced the use of precision agriculture on her farms. Her story is a familiar one for many Iowa landowners. A fourth-generation farm kid from Greene County, and the eldest of six daughters, Chris moved away after high school. After nearly 30 years, 17 of which she spent with Meredith Corporation, she moved back home from Des Moines. In 1992, she and her new husband, Max, purchased a farm near Jefferson – just in time for the infamous 1993 floods.

“The flood of 1993 changed my life,” Chris says. “In Jefferson, we had 8 inches of rain in one July afternoon. All of that water from the land upstream came to my farm down the creeks.”

The water roaring through the farm ripped new gullies deep enough to lose tractors over the span of just a few days. She says this was the moment when she got interested in what was happening in the watershed, rather than just what was happening on her farm. “It might have taken me a lot longer to see the connection to the watershed and the impacts downstream if the flood hadn’t happened – if the Des Moines Water Works hadn’t been swamped and my home in Des Moines flooded,” Chris says. “It was affecting my neighbors and my friends – my life [in Des Moines] – where I had just come from.”

“Even taking out 10 acres of the farm that didn’t grow anything has made a huge difference. There’s more wildlife, more diversity, better water quality and the farm’s yield numbers are up.” – Chris Henning

In 2008, Chris’ father died and she began managing the farm she had grown up on, as well as the farmland she and Max had purchased in the early ‘90s. In 2010, Chris took ownership of her share of her parents’ farm. “There were pieces of that big field where the soil was the color of cement,” Chris says. “At that point, I had no agronomy and no soil sampling history on that farm, but I would have told you that the soil was dead.”

Over the first few years Chris owned the farm, she noticed that certain areas were consistently unproductive because of water ponding. “It didn’t matter how much we put in,” Chris says. “The crops were still drowning out.” Working with USDA’s Farm Service Agency, she was able to enroll these areas into the Farmable Wetlands Program (FWP). A subprogram of the Conservation Reserve Program, the FWP is specifically designed to help farmers and landowners like Chris restore wetlands in farm fields. Wetlands restored as part of this program reduce erosion, improve water quality and provide critical habitat for wildlife like pollinators and migratory birds. Furthermore, when they’re installed on marginal cropland acres that would otherwise require extensive tile drainage or inputs (fertilizer, pesticides or herbicides), such restorations can actually improve the return on investment for an entire field.

Chris’ experiences on her farm back this up. She says the combination of improved soil health from implementing field-wide practices like no-till and cover crops, and from removing the newly restored wetlands from production, bumped the average yield numbers up considerably. In turn, the improved return on investment resulted in crop insurance numbers that were much more attractive. “Even taking out 10 acres of the farm that didn’t grow anything has made a huge difference,” Chris says. “There’s more wildlife, more diversity, better water quality and the farm’s yield numbers are up.”

Integral to Chris’ mission to implement more conservation on her farm is her collaborative approach to working with her farm tenant. Chris says she is much more involved in farming decisions than many other landowners because she doesn’t cash-rent, but rather has crop share leases on her farms. Like most crop share arrangements, which are increasingly uncommon in Iowa, she’s directly responsible for half of the cost of inputs going into the farm. This shared financial responsibility encourages her to be more directly involved with the farm – when possible, Chris says she tries to ride along at planting, and she is always in the combine come harvest.

“I get first-hand experience with not only what the monitors and data are showing, but also what the soil and crops look like and what the farm operator thinks of it all,” Chris says.

She is also quick to point out that being more engaged with the farm and her farm operator doesn’t mean the process has been completely seamless, especially as the conservation practices she wanted to implement became more complex. “It is critical that my tenant is open to dialogue and understands and appreciates my dedication to environmental stewardship,” Chris explains. “My farm operator really tries to listen to what I want and need, and I try and listen to what he wants and needs. It’s a two-way street.”

Chris acknowledges that her priorities are driven by her environmental concerns and may always differ slightly from those of her farm operator, who has to make a living from the production of crops. While the health of her soil – as well as knowing the wetland is not being farmed and the farm is not putting chemicals into the water – matter far more to Chris than the return on investment or average yield per acre, she also recognizes the validity of her tenant’s point of view. These different perspectives help both Chris and her farm operator to think more deeply about each other’s needs.

“I have to look at numbers in a way that I don’t usually,” Chris says, “and my tenant has to look at the environmental impacts. In the end, the changes we make, like the wetlands, usually benefit both of us, even though our priorities are always a little different going in.”

“When it came time for the wetland restoration, the local county NRCS and FSA folks were very helpful,” Chris says. “It’s paperwork-intensive, but if you have good people in those offices who can help and a good tech who knows what’s what, then it’s relatively painless. They can help way more than you’d expect.”

Chris says there’s almost always a program that replaces marginal cropland acres with something that’s diverse and has multiple environmental benefits. She encourages farmers and landowners to look for such opportunities on their own farms.

“If we all just took the 10% of our least valuable acres and put them into some sort of conservation effort, we could mitigate so many of the problems we face,” Chris says. “We could benefit wildlife, birds, pollinators, insects. We could mitigate climate change and put carbon back in the soil. We could make our soils better and healthier. We wouldn’t have to give up farming – in fact, we’d even make it more profitable.”

Creating Habitat with the Partners for Fish and Wildlife Program