Nitrogen credits from a legume cover in an extended rotation could enable us to cut nitrogen fertilizer rates by 50 to 100 lbs per acre; with current nitrogen fertilizer prices, that could mean a savings of between $19 and $54 per acre, depending on the source of synthetic fertilizer. However, nitrogen availability from legume cover crops such as clover and alfalfa is nuanced. On our March small grains shared learning call, we heard from PFI Research and Field Crops Director Stefan Gailans on estimating the amount of N available to our corn crop following clover or alfalfa. 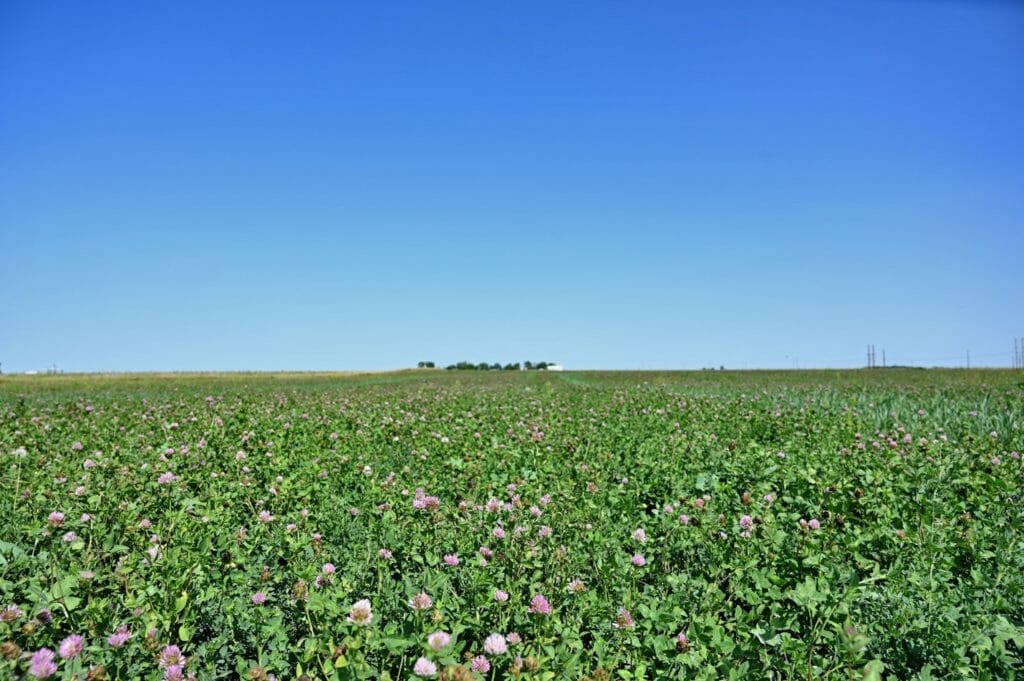 Clover at A & W Farm near Cambridge, IA will be a nitrogen source for the following corn.

So, just how much N can we cut from our typical nitrogen rate if we add a legume cover crop? Or to say it another way: what kind of N credit is my legume cover crop providing? It depends, but studies from Ontario, Michigan, Iowa and Wisconsin have shown that, as noted above, a clover cover or mature alfalfa stand might enable us to reduce N rates to corn by 50 to 100 lbs N/acre.

Nitrogen availability to a corn crop following clover or alfalfa is mostly a function of two factors: 1) nitrogen fixed by the cover and 2) decomposition rate of the cover as influenced by termination timing, whether the cover is incorporated into the soil, and field soil and climate conditions. 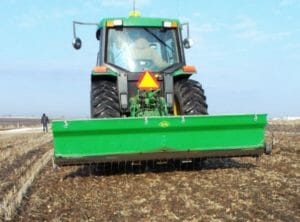 Stefan explained that in most academic studies measuring soil nitrogen content after clover or alfalfa had a minimum of 1000 lbs/acre dry biomass, or at least 12 inches in height of dense clover. We should aim for a high amount of biomass with a consistent stand. For adequate growth, Stefan recommended frost seeding or co-seeding between 12 and 15 pounds red clover per acre early in the year. Using a cultipacker or spike drag after broadcasting the seed will help achieve a consistent stand.

For alfalfa, significant nitrogen accumulation in the soil does not occur until the second year or later; this is because the first year of alfalfa is mostly top-growth.

Inoculated seed is crucial if your field has not had clover or alfalfa for several years, since the N-fixing Bradyrhizobia bacteria specific to clover or alfalfa is not endemic to soils that have been exclusively in corn and soybeans. As a producer on the call explained, “If you’re not sure, it’s better to invest the couple of extra dollars [in inoculum] than to let that go by the wayside and miss out on the nitrogen fixation.”

Stefan notes that in our geography red clover has the greatest N fixation potential for a co-seeded cover, and, if summer seeding after harvest, berseem or crimson clover perform well, but will not contribute as much N as red clover or alfalfa seeded early in spring with the small grain. Seeding only clover is preferable to seeding a mix if your goal with the cover is strictly nitrogen fixation as the clover will not have to compete with other species. 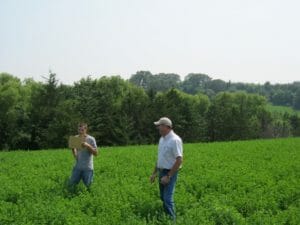 A thick stand of at least second year alfalfa is an excellent source of nitrogen.

Mowing or grazing the clover or alfalfa is likely to have a negligible impact on N levels in the following corn crop, since fixed nitrogen is below ground. Mowing and grazing early in the fall results in the clover coming back strong while chopping off what would become weed seed heads.

Nitrogen availability from clover or alfalfa to the following corn crop depends greatly on the timing of decomposition of the plant material. We have control over a few factors influencing decomposition timing, including whether the legume cover was incorporated into the soil with tillage.

Tillage: Incorporating a legume cover crop into the soil with tillage makes the nitrogen in the aboveground biomass accessible to the microbes in the soil, enabling those microbes to break down the biomass and release N in a plant-available form. Tilling in the cover will likely result in greater N availability to the following crop, but with the caveat that tillage also has drawbacks (i.e. increased potential for soil erosion, altering soil structure).

With chemical termination of a cover – without tillage – the aboveground biomass N is not lost, but will take longer to decompose on the soil surface, so less N will be available to the following crop. However, that surface biomass will eventually decompose and release N, which will increase soil N levels over the long-term. Stefan notes that it may take a few iterations of a legume in the rotation before we build our soil N levels to be able to successfully cut N rates to corn.

While many people are interested in planting corn into green clover or alfalfa, Stefan notes that the antagonism of the legume on the corn seedling can interfere with corn establishment; therefore, the legume cover should be terminated at least seven days before corn planting. If chemically terminating the cover, Tim Sieren recommended a half pint of Banvel plus typical glyphosate rate. This extension article has helpful clover management tips.

Climate: Soil microbes are most active under warm, moist soil conditions, so the legume cover will decompose and release N more quickly in warm, wet springs.

Consider simple experimentation on your own field

Estimating an N credit from legume cover crops is not straightforward, but we can do a few things to increase both N fixation potential and N release by the legume cover. To determine an N credit estimate from legume covers, we can experiment with nitrogen fertilizer and manure rates year to year or in strips on our field. Using a late spring nitrate test with a sampling depth of 12 inches is another helpful tool for determining N rates for sidedress.

ISU Research: Use of Legume Green Manures as Nitrogen Sources for Corn Production