Over the last year, the COVID-19 pandemic has vividly illustrated the importance of locally grown food. Facing unprecedented disruption in food supply logistics along with sharp increases in demand, many groceries and markets struggled to maintain adequate supply, and consumers turned to local, direct-to-consumer farms to fill the gaps.

Schools, in particular, struggled as they sought to continue providing meals to students who needed them over the summer, and then to those learning remotely once the school year resumed. In late summer 2020, using a portion of the money it received from the federal CARES Act, the state of Iowa announced a new grant program designed to help educational institutions gain better access to locally grown food. This Local Produce and Protein Program (LPPP) provided grants to producers, food hubs and schools to build capacity and infrastructure and, in the case of schools, actually purchase local foods. 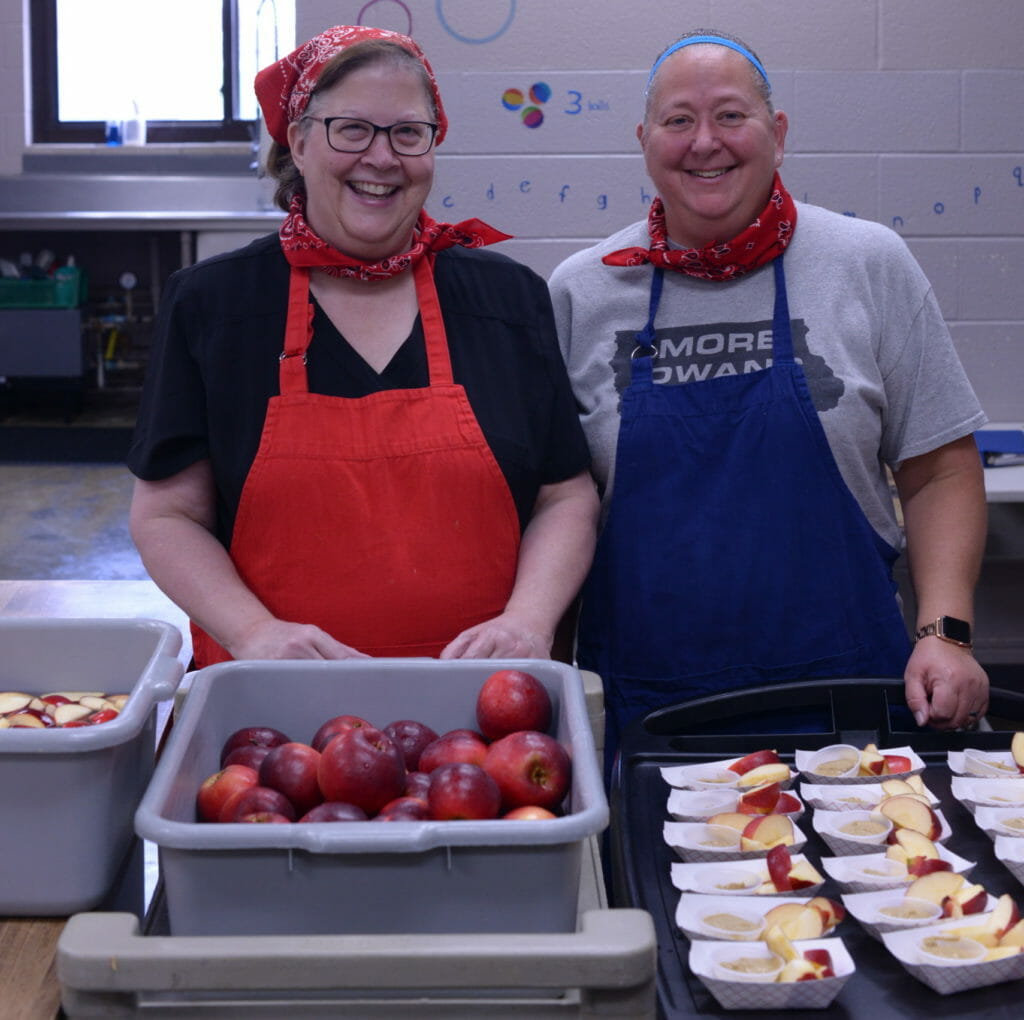 Farm-to-school refers to the sale and consumption of locally grown foods in educational institutions, usually encompassing pre-K through 12th grade and centers of higher education. In Iowa, many vulnerable and low-income families lack access to healthy local food. Childhood obesity and malnutrition are growing problems – Iowa currently ranks 13th in the nation in childhood obesity, according to data from the Robert Wood Johnson Foundation, and many rural communities lack a local grocery store.

The Iowa Farmers Union’s Local Food, Healthy Kids initiative reports that only 63% of census tracts in the state have access to a “healthy food retailer,” 9% below the national average. Against this backdrop, schools provide a unique opportunity to get healthy and nutritious food to the children who need it most. Locally sourced food also tends to be more diverse than standard lunchroom fare.

Jason Grimm is a PFI member, farmer and executive director of the Iowa Valley RC&D (Resource Conservation & Development). He also co-leads the Iowa Food Hub Managers Working Group. Jason worked with food hubs and schools to pursue LPPP grants to increase their ability to purchase local food. He also received an LPPP grant for his own operation that enabled him to better meet rising school demand for locally grown produce. “It’s important to improve the diversity of the lunchroom,” Jason says. “Not just russet potatoes, but purple potatoes. Not just canned beans, but dry beans.” 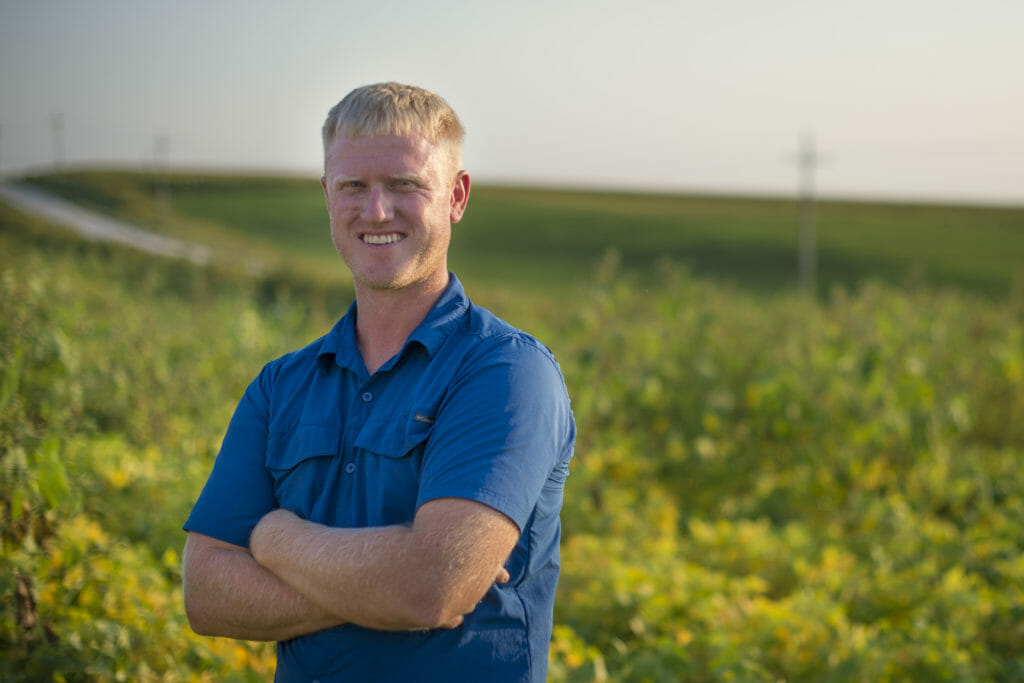 . . . LPPP grant funds enabled schools that had never before purchased local food to take the proverbial plunge and work with local food for the first time.

Farm-to-school initiatives are also good for farmers. Jason explains that for many specialty crop producers, schools can be a valuable market with consistent and significant demand. For farmers growing a diversity of crops, he says schools can buy a lot of different products at different times throughout the year. They can also provide steady demand throughout the year for bulk crops like potatoes. “I can sell potatoes three or four times each fall,” Jason says. “It’s also a great way to get my name and my brand out there by building those relationships with the schools.”

Food hubs can also play a critical role in farm-to-school efforts. These are organizations that serve as buyers and aggregators of local, traceable farm product, and they can help farmers find or develop markets for products, as well as offer logistical support to farmers and food buyers. Jason says that food hub-to-school partnerships can benefit both sides. Because schools might not know what product is available or how to get it, food hubs can help with procuring product and the logistics involved. On the flip side, schools can be a source of steady markets and income in both the spring and fall seasons for food hubs and the farmers they serve. 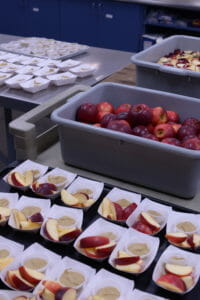 To help spur greater farm-to-school connections, the state of Iowa introduced the Local Produce and Protein Program (LPPP) in 2020. The program provided equipment and infrastructure grants to farmers, food hubs and schools to expand capacity to grow, sell, distribute, prepare or serve local food. The program also provided funds to schools for the direct purchase of local food. The grant program was relatively small – just a few hundred thousand dollars split among farmers, food hubs and schools. But its impacts are swiftly becoming clear.

“Even with the relatively small scale,” Jason says, “purchase and infrastructure grants were used by school districts to purchase local food for the first time.”

Most schools lack funding to purchase local food. Jason says the data that Iowa Valley RC&D and the Iowa Food Hub Managers Working Group are collecting from schools makes it clear that the LPPP grant funds enabled schools that had never before purchased local food to take the proverbial plunge and work with local food for the first time. The long-term impacts are less clear, but the theory is that once schools have made their first local foods purchase, they are more likely to continue purchasing local food. Anecdotal evidence backs that up.

“One food hub worked with six new schools that had no idea that food hubs existed or how to go about purchasing local foods,” Jason says. “That’s a whole new set of relationships that’s going to continue.”

For farmers, the effects were likely much less immediate. Jason points out that, due to the timing of the grants, growers weren’t really able to use the additional funds to make purchases that increased their capacity for the 2020 growing season. However, he says the grant he received and used to purchase new equipment did help offset the risk of a new investment.

“Going forward, having the new equipment is going to allow us to scale up and do more beans and different varieties of beans,” he says. “That should lead to more opportunities for selling to schools and food hubs.”

Next Steps and Challenges for Farm-to-School

Despite the LPPP’s boost to local food in schools, challenges to building effective farm-to-school relationships remain. For example, Jason says more work needs to be done to help schools offset infrastructure and equipment costs. Because preparing and serving fresh, local food requires certain infrastructure and equipment, a lack of funds to upgrade is often a persistent barrier preventing schools from buying local food.

There’s also an education component that needs to be addressed. Jason says that schools sometimes don’t know how to effectively prepare new product. “I’ve worked with local school districts to develop new recipes for different products, like legumes. In particular, I’ve helped one local school district learn how to prepare dry beans. It’s a way to introduce a new product to a school district and build that relationship.”

Farmers, too, will need additional support to offset risks and expand production to meet increased demand from schools. Although schools have the potential to be major markets for local food, farmers usually need to make production decisions well in advance of school purchasing decisions. This mismatch in timing complicates efforts to simultaneously scaling up supply and demand that government programs, like LPPP, could help offset.

State officials seem to recognize the need for state programs benefiting farm-to-school initiatives, and the opportunities they can bring. During the 2021 legislative session, both Governor Kim Reynold’s proposed budget and the Iowa Department of Agriculture and Land Stewardship’s budget request included more permanent funding for a program very similar to LPPP.

For farmers interested in building relationships with their local schools, Jason says a good place to start is with a local food hub. But for those who don’t have access to a food hub, or who are interested in building a personal relationship with the local school, Jason says it’s best to start relatively small, not push too hard and start the conversation as early as possible.

“My recommendation is to contact the school food director with a one-page document detailing the items you grow, sooner rather than later,” he says. “You can’t really start too early. I also wouldn’t start off talking about prices. Talk about quantities, talk about times of year when product would be available and make sure the school knows how to get a hold of you.”

Rising to a Local Foods Challenge