Farming for the Long Haul

A commitment to soil health and mentoring others has defined the farming ethos of Paul Ackley and his late wife, Nancy

In January, Paul Ackley, a diversified crop and livestock farmer from Bedford, Iowa, and his late wife, Nancy, were honored with PFI’s 2021 Sustainable Agriculture Achievement Award.

The award has been granted each year since 1990 to an individual or couple that has shown exemplary commitment to sustainable agriculture, generously shared their knowledge with others and been influential in efforts to foster vibrant communities, diverse farms and healthy food. The award ceremony took place on Jan. 22, during PFI’s 2021 virtual annual conference, “Coming Home.”

Paul operates a diversified farm in southwestern Iowa, raising corn, soybeans, hay, winter wheat and a diverse mix of cover crops, as well as hair sheep and cattle, on about 800 acres. Until her death in December, Nancy was a vital part of the farm operation over the couple’s more than 50 years of farming together, managing the farm’s accounting system; helping to sort hogs, move cattle and plant crops; and attending farm conferences and events with Paul to help take notes and brainstorm ideas for their farm.

“Nancy liked to see things grow and be part of creating something of value,” Paul says. “She could drill soybeans as well as anybody, and rake hay like a champ.” 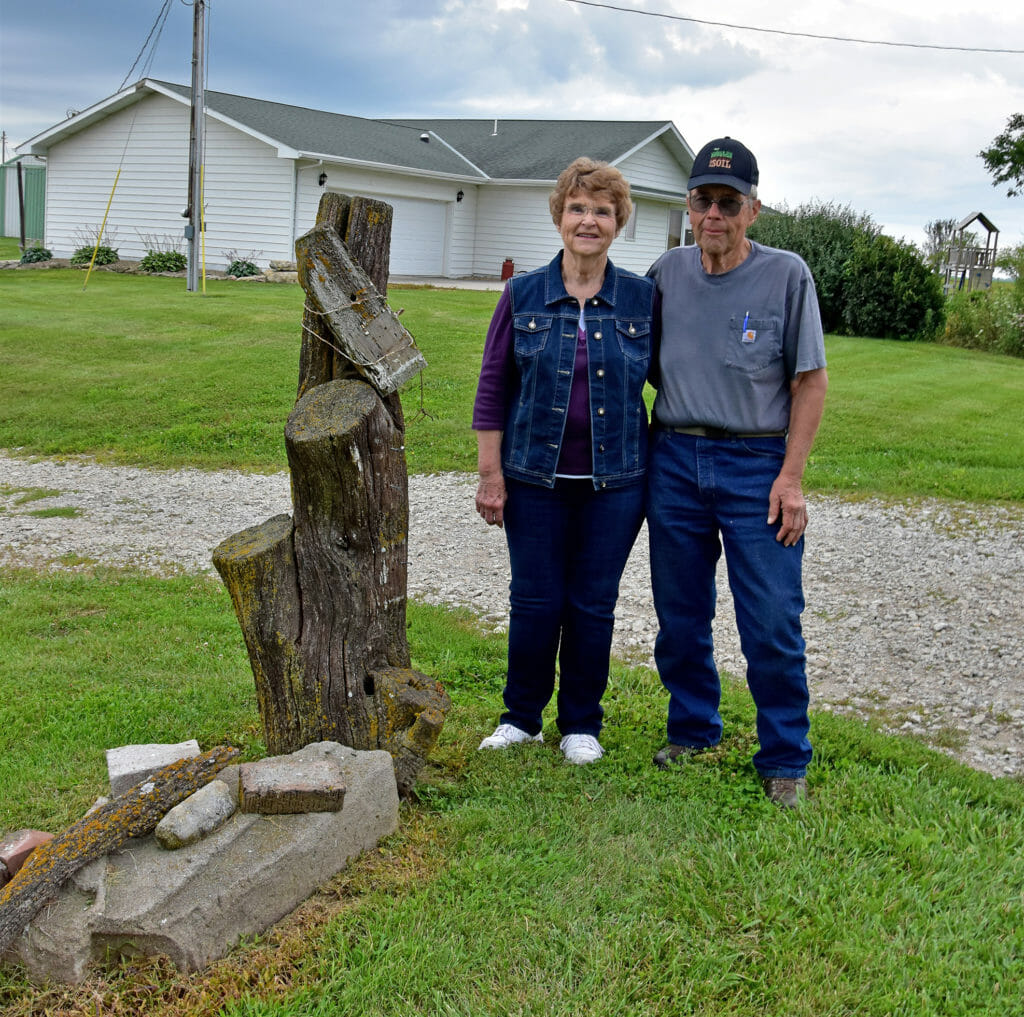 The Ackleys have been members of PFI for more than 15 years – but they have served as sustainable agriculture leaders for decades, modeling thoughtful soil stewardship and regenerative farming practices, and serving as inspiration and mentors to countless farmers over the years. In addition to using cover crops on all their crop acres, they have been completely no-till for 30 years and practice rotational grazing to help nurture soil health. They have also installed terraces, wetlands, grassed waterways and riparian buffers to minimize erosion and provide wildlife habitat.

“Paul was a long-time soil health and regenerative agriculture advocate well before it was a hot topic,” says Colten Catterton of Green Cover Seed, who presented the award to Paul during the virtual award ceremony. “He’s a modest man that never boasts and doesn’t claim to know everything, but rather has an insatiable thirst for knowledge that is contagious.”

A Lifelong Focus on Soil Health

While Paul’s farming practices and philosophies have evolved over time, his concern for soil health is deeply rooted – and has always been a key barometer driving change on the farm. As an only child growing up, he recalls his parents sharing their memories of the devastating effects of the Dust Bowl, and their awareness of the perils to the soil of focusing too heavily on one crop. “My mother would talk about the sky being red with dust, and Dad kept as much ground seeded as possible, because he was very aware of what rainfall could do,” says Paul, who also serves as soil commissioner for the Taylor County Soil and Water Conservation District.

“I don’t think just stopping erosion is enough. We need more life in the soil . . . . We need to re-store some of the wealth, the organic matter we’ve pulled out.” – Paul Ackley

Three months after graduating from Iowa State University in 1967 with a degree in farm operations, he was drafted into the Army, married Nancy and relocated to Kentucky for six months while in the service. But he always knew he wanted to farm, and in 1969, he and Nancy returned home to Bedford. Having grown up on a diversified farm that included small grains and hay, Paul says he and Nancy felt they needed a crop rotation with perennials in it. But he also came of age at a time in the 1950s and ‘60s when many farmers in his community were getting out of farming. The stream of farm sales over the years left an imprint, pitting financial survival against Paul’s instincts to let the condition of his soil guide his actions.

“I remember seeing so many closing-out farm sales during the winter in our local paper from the mid-1950s, when I started reading it, until 1963 when I graduated from high school,” Paul says. “I wanted to be a ‘stayer,’ and so profit and financial survival rose to the top instead of being equal to the other two pillars of farming – that it does no harm to our neighbors, and restores and regenerates our soil resource.”

This initial concern of getting started in farming – and, most importantly, surviving as a farmer for the long-term – led Paul and Nancy to drop perennials from their crop rotation, experiment with continuous corn and start using herbicides and insecticides. But the health of the soil was never far from Paul’s mind, and he carefully observed how the soil responded to the profit-centered changes introduced on the farm. “When we started to drop perennials, I wondered how it was going to work,” Paul says. “It worked all right for a while, and then the soil lost its structure and ability to take rainfall rather quickly. It just didn’t have any life in it.”

These observations would start the process of leading Paul back to the path of holistic soil stewardship – and to a realization that healthy soil was as important to being a “stayer” as making a profit.

In 1972, Paul and Nancy seeded a rye cover crop as bedding for their pastured hogs, and they continued experimenting with a cover crop over the next few years after seeing how “the hills didn’t look right bare after corn was taken off.” In the mid-1980s, they added wheat to their rotation to have straw for their hogs – around the same time they purchased their first no-till planter – and by the late 1980s, they started tinkering again with rye on some of their crop acres.

By 1990, Paul and Nancy had stopped tillage completely, believing it would put an end to erosion. But Paul says that, to his disappointment, he still saw a lot of erosion on his rolling southwest Iowa fields and noticed a lag in how quickly the crops took off in the no-till ground. The big turning point in his understanding of soil health came when he was running a tiling machine through his fields.

“I’d left some grass strips around the hill – cool-season grass perennials,” Paul recalls. “We looked at the top 6-8 inches of soil [in the no-till areas] and saw it looked like cake batter compared to the soil structure in grass strips. There was no pore space, and I understood why – we needed cover crops and roots in the soil to hold that soil in place and get pore space if we didn’t have diversified crop rotations.”

This epiphany led Paul and Nancy to pursue cover crops with a newfound sense of purpose, expanding their cover crop acreage and eventually putting covers on all their crop acres. It also led to a shift in Paul’s understanding of what soil stewardship – and sustainable agriculture – really mean. “I don’t think just stopping erosion is enough,” Paul says. “We need more life in the soil. It’s really 90% biology, but back when I was in college, we were told soil biology was of minimal importance. We need to re-store some of the wealth, the organic matter, we’ve pulled out. I think there’s value to be gained from regenerating the soil, not just accepting a degraded resource.”

In 2010, he and Nancy added wheat back into their crop rotation to keep the soil covered in the winter and spring, and offer a window after wheat harvest in the summer to plant a diverse cover crop mix that adds nutrients back to the soil. The cover crops also supply extra forage for their cattle and sheep, which Paul grazes together and contribute additional fertility to his pastures – and its underlying soil, which Paul see as his most valuable resource.

“The wealth of our nation is really in the soil, and the wealth of my farm,” he says. “It’s not in how many bushels we can ship to Taiwan or China.”

Helping Others, One Mind at a Time

For Paul, the changes he and Nancy have witnessed on their farm – improved soil health, and a regenerative system of farming practices buttressing it – represent the direction he feels agriculture needs to go. But he also believes small changes can lead to outsize benefits. “If we look at the four ecosystem processes – the water cycle, energy flow from sun capture by plants, the nutrient cycle and the community dynamics of plants – they change over time,” Paul says. “But the good thing is, when you begin to work on one of them, it usually has a positive effect on the other three. So you start to become more than just sustainable.”

This is one of the many nuggets of knowledge acquired from their decades in farming that Paul and Nancy have freely shared with other farmers through field days, grazing groups, on-farm research and an enduring spirit of openness to mentoring others.

“Paul and Nancy are both students as well as teachers,” says Mike McDonald, a farmer from Palmyra, Nebraska, who has worked with Paul and Nancy over the years. “They foster a rippling effect as neighbors, including myself, deepening our learning. I am indebted to their help, but more importantly their friendship. They are deserving of this noteworthy award by PFI and we appreciate the opportunity to recognize them.”

Knowing he and Nancy have given a lift to other farmers is a source of great satisfaction for Paul, who thrives on connecting with “one mind at a time” – as is the knowledge that their dedication to soil health over the years helped them stay in farming for the long-haul.

“Nancy knew we were headed in the right direction,” Paul says. “We’d drive around after a rain and controlled erosion with plant roots, and that was very rewarding for her to see.”