We continue to crunch the numbers and it’s safe to say that grazing cover crops pencils out. Practical Farmers has conducted on-farm economic research on this topic since 2015. We have collected data from different scenarios: grazing with gestating cows and cow-calf pairs, finishing steers grazing cover crops adjacent to their feedlot, experimenting with different cover crop mixes and contract grazing of cover crops involving both a cattle and row crop producer. Each unique situation resulted in positive net returns for the farmers.

Each farmer grazed cereal rye between their corn and soybean rotations, and the bulk of grazing took place from November to December and again from April to May. When cows are out grazing during these months, farmers have to feed less hay (or other stored feeds) – and saving money on hay translates to profits.

Across the four farms, profits ranged from $37 to $124 per acre. On average, farmers saved $2.68 per animal unit (1,000 pounds of animal) per day in hay expenses when grazing cover crops. Over the entire cover crop grazing season, farmers saved a total dollar amount ranging from $3,000 to $31,000 in feed expenses.

Wesley Degner, who was new to cover crops at the start of this project, now has six years of experience. “We’re planning to continue grazing cows on cereal rye that we aerial-seed around the Labor Day timeframe each year,” he says. “It makes our life easier in the winter. We have less feed costs and grazing gives the cows exercise before spring calving.” 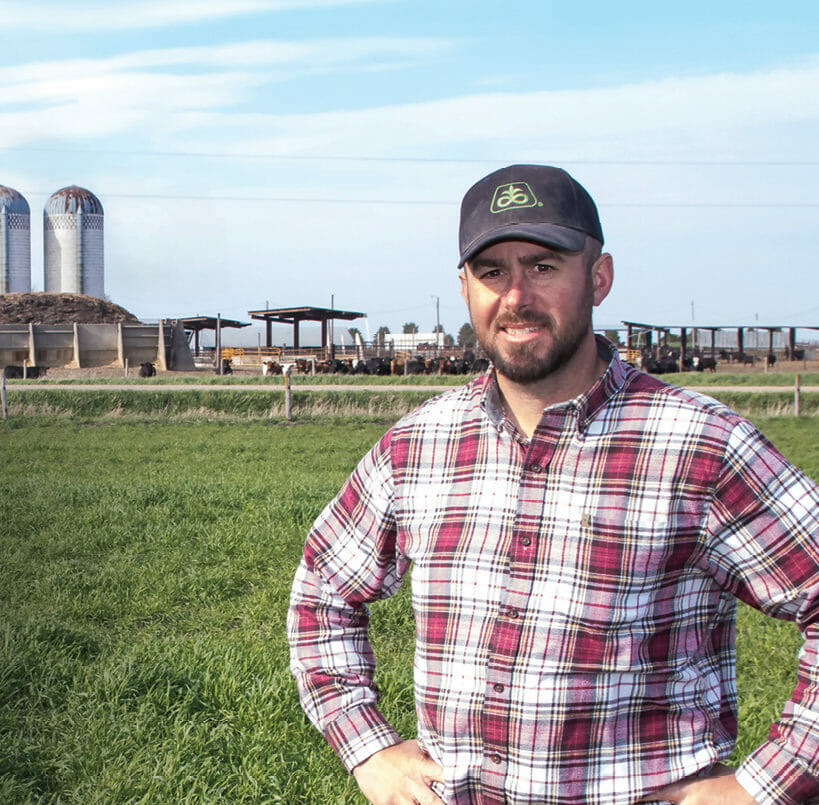 While grazing cover crops is becoming standard practice for cow-calf producers, it has been implemented to a lesser degree in feedlots. In new research, Ben Albright of Lytton showed how a cover crop field adjacent to his feedlot could provide supplemental forage simply by opening a gate and letting finishing cattle graze the field.

The fresh forage allowed Ben to back off the amount of total mixed ration he fed to his steers, saving an estimated $0.05 per animal per day. This added up to an average savings of $46 per acre – or $16 per animal. In total, Ben saved an average of $3,850 in feed each year by giving his cattle access to cover crops, and without sacrificing animal gain or carcass quality. “The numbers show that grazing covers is a no-brainer for cattle producers,” Ben says. 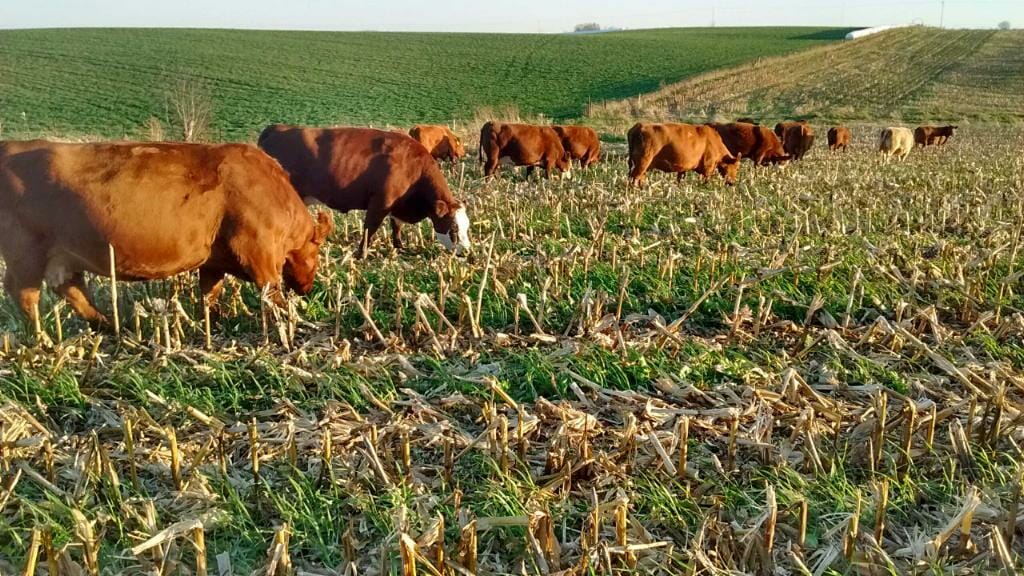 Mark Glawe, who farms near Garber in northeast Iowa, has experimented with planting and grazing different cover crop mixes. In one field following an oat and pea crop, he planted a nine-species mix that included mung beans, crimson clover, winter peas, pearl millet, cereal rye, sorghum-sudan grass, turnip, rapeseed and sunflowers. In other fields he planted cereal rye and oats.

The cost to establish a cover crop totaled $62 per acre for the nine-species mix, and $38 per acre for the rye and oats. “Only four or five species did really good in the nine-species mix,” Mark says, “because they seemed to drown out the less vigorous ones.” He has determined that his preferred mix would include cereal rye for spring grazing, oats for fall grazing, turnips (“because cows love them”), sorghum-sudan grass and pearl millet.

Overall, Mark ended up reaping more profit from his less expensive cover crops due to vigorous growth and large windows of opportunity for spring grazing. Mark’s profits ranged from $41 to $403 per acre. “Out of the last 10 years, 2020-2021 was my best year yet,” he says. “On average, I profit about $50 per acre each year. Usually I don’t get that much spring grazing, but spring 2021 was dry, so we weren’t having to take the cows off because of rain.”

Another perk is that Mark’s profits help subsidize the cost of cover crops in fields he is unable to graze for one reason or another. Cover crops are important on Mark’s farm, which is located on D and E slopes in Iowa’s Driftless region. In the standard hillslope classification system, a slope’s steepness– which influences how quickly water will run off, as well as potential for soil to erode, among other things – is described using the letters A to F, where D slopes are “strongly sloping” (at an angle of 13-18%) and E slopes are “moderately steep” (at an angle of 19-25%). In Clayton County, Mark says his neighbors are catching on. “Last year [the county] had 2,000 acres of cover crops seeded, and two-thirds of those acres were used for grazing,” he says. 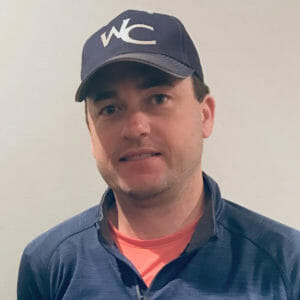 Farmers Nick Smith of Epworth, Iowa, and Tim Daly of Farley, Iowa, have been partnering for at least 10 years. Nick grazes a cover crop medley – which consists of cereal rye, oats and radish – on Tim’s row crop fields. Nick and Tim split the cost of cover crop seed and application, which equates to about $19 per acre for each farmer. The situation works out to be profitable for both parties. Tim receives the cover crop cost-share payments and also benefits from reduced herbicide passes, which saves him money. Nick benefits from the feed value.

Over the last two years, Nick has profited an average of $133 per acre, Tim an average of $27 per acre. Nick and his brother Ted are more than willing to put up temporary fences, move cattle from field to field and haul water through the winter because these things are drastically cheaper than feeding hay.

Learn More: Each of these scenarios is summarized from on-farm research trials. Detailed economic data can be found in the accompanying research reports here.