In 1984, Helen Scuffham, of rural Algona, Iowa, couldn’t find pumpkins locally to buy for her two young sons. So the next year, the family – John and Helen, and sons Matt and Mark – planted some pumpkins in a cattle lot.

They ended up with a couple hundred pumpkins, put an ad in the paper and sold the pumpkins within 10 days. Throughout high school, Matt and Mark led the pumpkin-growing endeavor.

Once the boys went off to Iowa State University, the pumpkin business became part of Scuffham Gardens, run by John and Helen. Pumpkins are heavy and labor-intensive, so the business eventually moved to Scuffham Brothers, LLC, and John’s brother, Rod, joined the effort. “You handle pumpkins more than once,” John says. “We got to the point of handling more than 500,000 pounds of pumpkins each season. We got to the age where pumpkins no longer made sense for us.”

Ready to pass on the business to another family, the Scuffhams asked Beany Bode and Joanne Roepke Bode – their neighbors, and operators of Bode’s Moonlight Gardens – if they were interested in raising pumpkins. Helen says, “They were the only people that we trusted would work hard enough to take it over.” 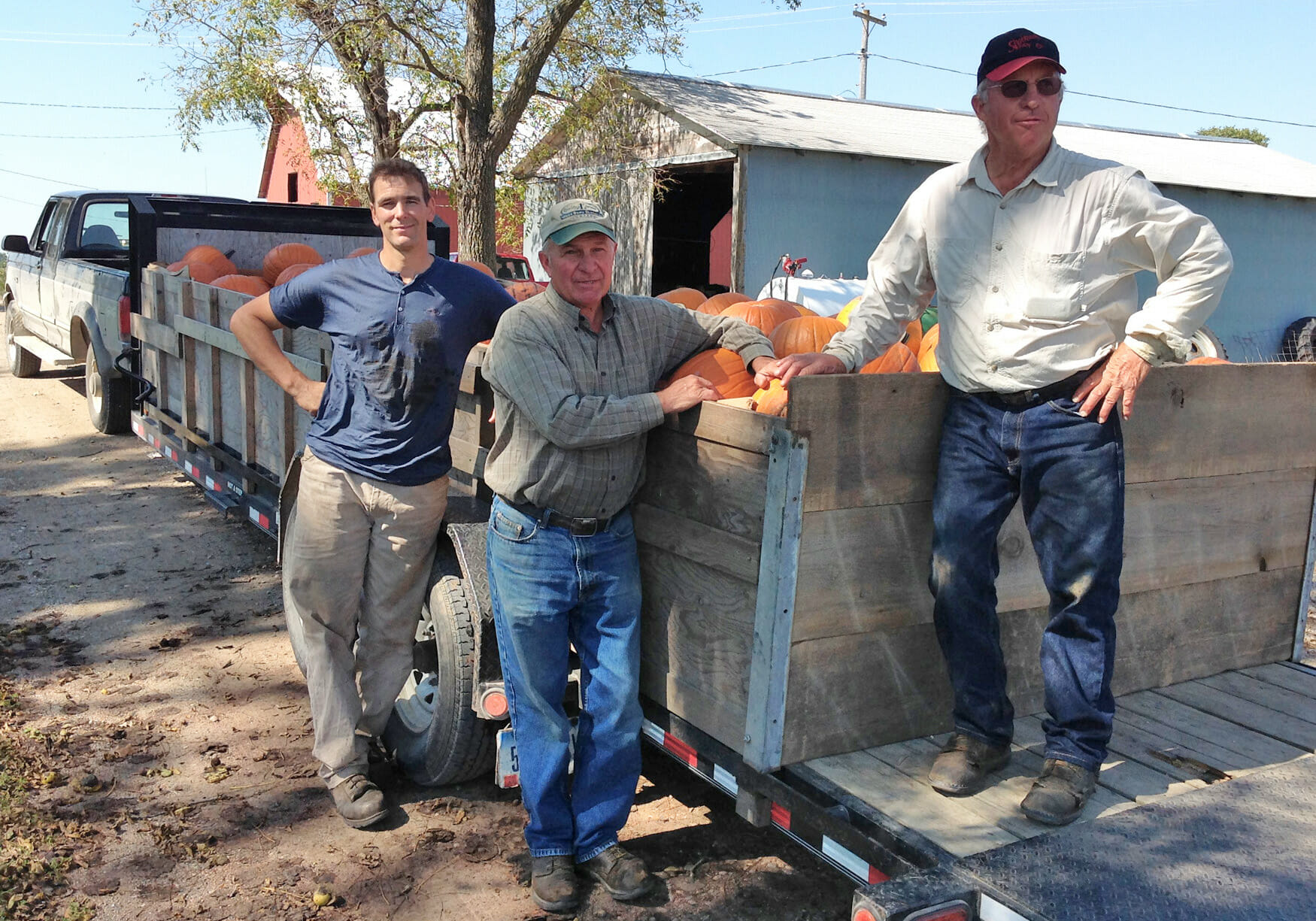 Beany Bode, left, stands with the Schuffham brothers, John and Rod, in 2014, the first year Beany and Joanne grew pumpkins after the the Schuffhams transitioned the wholesale part of their business.

The Bode and Scuffham families had been neighbors for a century, so the Scuffhams had known Beany his whole life. In addition, Joanne and Beany had a booth next to John and Helen at the local farmers market. When the Scuffhams offered the business, Beany was teaching high school biology, ecology and other science classes full-time, and coaching sports, at Bishop Garrigan High School while also raising food and three kids with Joanne on the farm.

Despite their busy schedules, Joanne and Beany realized that taking on the pumpkin business could help the family transition more time to the farm – so they accepted the offer. John and Helen transitioned the wholesale part of the business and kept the retail side. “When we started in the ‘80s, we had to bring pumpkins up to the garage because nobody wanted to go to the patch,” John says. “Now that has flipped. They all want to pick their own pumpkins now.”

“If [customers] didn’t get pumpkins from us, they still had to buy them from somewhere. Why not have them continue to purchase pumpkins from the good earth of Kossuth County…” – Helen Scuffham

Transitioning a business without passing on tangible assets like land and machinery can be complicated, but John says the customer base they had built was the most critical aspect. “The part of the business that had value was the buyers we had created strong relationships with,” John says. So in 2013, the last year the John and Helen grew for the wholesale market, they brought Joanne or Beany along when they dropped off pumpkins and introduced them.

Perhaps Helen and John could have calculated a cost to create market connections for Joanne and Beany, but they just wanted to see the business continue. “If [customers] didn’t get pumpkins from us, they still had to buy them somewhere,” Helen says. “Why not have them continue to purchase pumpkins from the good earth of Kossuth County, when we had people willing to do it, who we knew would do it well?”

John and Helen have been more than willing to serve as mentors, and they support Joanne and Beany’s independence. “They don’t do everything exactly as we did, as they shouldn’t,” Helen says. “It’s not our business now, it’s theirs. But they’re always welcome to visit with us for advice.”

Joanne and Beany have found that advice priceless. “It has been so important to have a mentor,” Beany says. “The first time we grew pumpkins, John and his brother Rod said they would come over and show me how to harvest pumpkins. I thought: What was there to learn? You cut the pumpkin, and it’s harvested.” The brothers told Beany to show up with a big knife. He did, but it was the wrong knife. Once that was remedied, they drove down the fence row together to harvest pumpkins. “They were kicking my butt with how fast they were picking pumpkins and throwing them on the rack.” Beany learned from John and Rod how fast-paced and tiring harvesting pumpkins for wholesale was.

Joanne had a similar lesson in pace. She and her kids were prepping 1,500 mini pumpkins for an order. They were washing each pumpkin thoroughly when John and Helen came over. Joanne says, “We had the wrong brushes, so they went to their place and got the right ones. When they came back, they were shocked with how little we had gotten done. They stayed and showed us how to do it, how fast we’d have to get it done. They stayed until all 1,500 pumpkins were washed.”

“It has been so important to have a mentor.” – Beany Bode

She adds, “We learned by them showing us the way that entire first year. And it’s still great to have someone to call and troubleshoot.”

In 2019, John and Helen decided to hang up their hats in the retail business, so in 2020, Joanne and Beany added a U-pick operation to their 15 acres of pumpkins. Beany and Joanne have succeeded in transitioning more time to the farm – Beany scaled down his teaching hours to part-time, and enjoys using the farm often as an outdoor classroom. Joanne continues to work part-time as the public relations manager for Kossuth Regional Health Center.

John and Helen can take satisfaction that the local pumpkin business they started and nurtured for two decades continues. Plus, they are no longer moving 500,000 pounds of pumpkins a season. John says, “My brother, Helen and I are happy as heck to see them hauling all of those pumpkins.”