A Gift for Growing Small Grains

Pat Murken has been farming with his family near Story City, Iowa, for over 50 years. For nearly 30 of those years, he grew oats, and he largely credits his success to one piece of equipment – a cultipacker. Now he is gifting that same piece of equipment to a beginning farmer, Emery Davis, who is looking to add small grains back on the farm for the first time in over 30 years.

Modernizing a Piece of Machinery 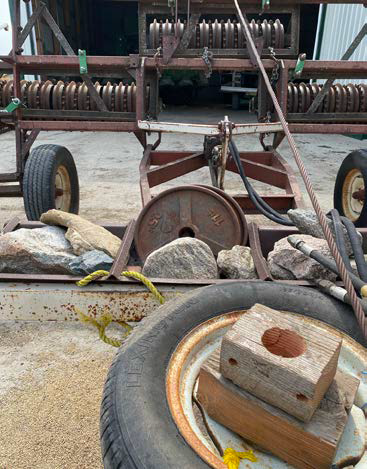 A view of an oak wood wheel bearing on Pat Murken’s cultipacker, which was built before the advent of modern metal bearings. Pat created a template that lets him easily cut new bearings when they need replaced every few years.

Throughout Pat’s years farming, he has implemented practices like cover crops, buffer strips and small grains, and he credits his aunt, Donna, with supporting him. “She was my inspiration,” he says. “She told me to be brave when doing something different.” In the early 1990s, with Donna’s encouragement, Pat decided to add oats to the family farm. He marketed the grain for seed and sold the straw as certified weed-free mulch. “When we added the grain and straw together, the oats had a higher per acre profit than corn,” Pat says. The oats became a staple of the farming operation.

Ten years into oat production, Pat decided to use a cultipacker after seeding the oats in the spring. These are heavy, rolling implements with several ridged wheels that crush small clumps of dirt, remove air pockets and press down small stones. A tractor pulls the cultipacker before or after seeding, gently firming the seedbed and helping ensure all seeds are in good contact with the soil. 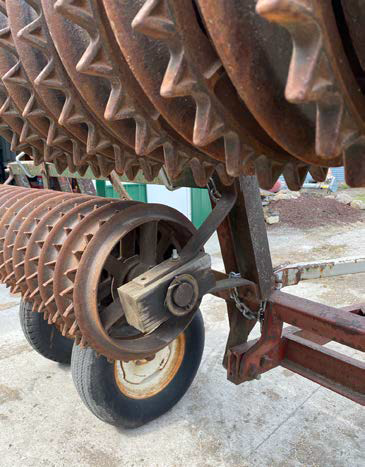 After he started using the cultipacker, Pat says he noticed his oat yields nearly doubled. “It’s the best machine for small grains that I’ve ever had,” he says. “A cultipacker ensures that every seed is touched by soil but is not compacted.” For smaller-seeded plants like oats, this is an important field condition that increases germination rates, and can even boost how many plants eventually emerge.

While modern versions exist, Pat’s cultipacker has a history. “My grandfather purchased the cultipacker from an auction in 1913, and it was originally pulled by six horses,” Pat says. “I bought the machine from my grandfather in the 1960s at a sale for $120. No one else wanted it at the time. Everyone wanted to haul it to the scrapyard.”

But owning an older piece of equipment was no problem for Pat, who works for John Deere and enjoys retrofitting machinery. For instance, his cultipacker was built before the advent of modern metal bearings, which help the wheels rotate on the shaft. So Pat’s bearings are made from wood, which he cuts himself out of oak. Since they have to be replaced every few years, Pat has created a template that lets him make new bearings easily.

“It’s the best machine for the small grains that I’ve ever had. A cultipacker ensures that every seed is touched by soil but is not compacted” – Pat Murken

Because the machine itself is heavy, to ensure it creates a firm seedbed, Pat fashioned a counterbalance out of an old hog trough to keep the cultipacker upright when being moved or stored. He also updated the chassis, added hydraulics and installed regular wheels to easily transport the cultipacker to and from storage to the field. For Pat, who is retiring from farming and no longer growing small grains, the cultipacker has been a labor of love. As he transitions out, he wants to ensure someone new to farming can use the equipment and be as successful growing small grains as he was.

After Emery Davis graduated in college in 2013, he pursued a career in conservation, first working as a biologist for Pheasants Forever and now as a soil health coordinator in Linn County, Iowa, where he helps farmers implement practices like no-till, cover crops and edge-of-field practices. In 2021, he had the opportunity to rent ground on his family’s farm near Crawfordsville, Iowa, for the first time. The family has already applied practices like no-till, cover crops and filter strips on their land, but Emery was curious to further extend their corn-soybean rotation. “We haven’t had small grains on the farm since I’ve been around,” Emery says. “I see a lot of value in small grains to diversify the rotation.”

As Emery began to think about incorporating small grains into the family’s farm, he had questions about how to make things work. Learning about PFI from close friends, he began tapping into the network of farmers, attending field days and learning from others. “As a beginning farmer, I’ve been blown away by the generosity of my family to let me be more involved in the farming operation and the patience of other farmers answering all my questions,“ he says. 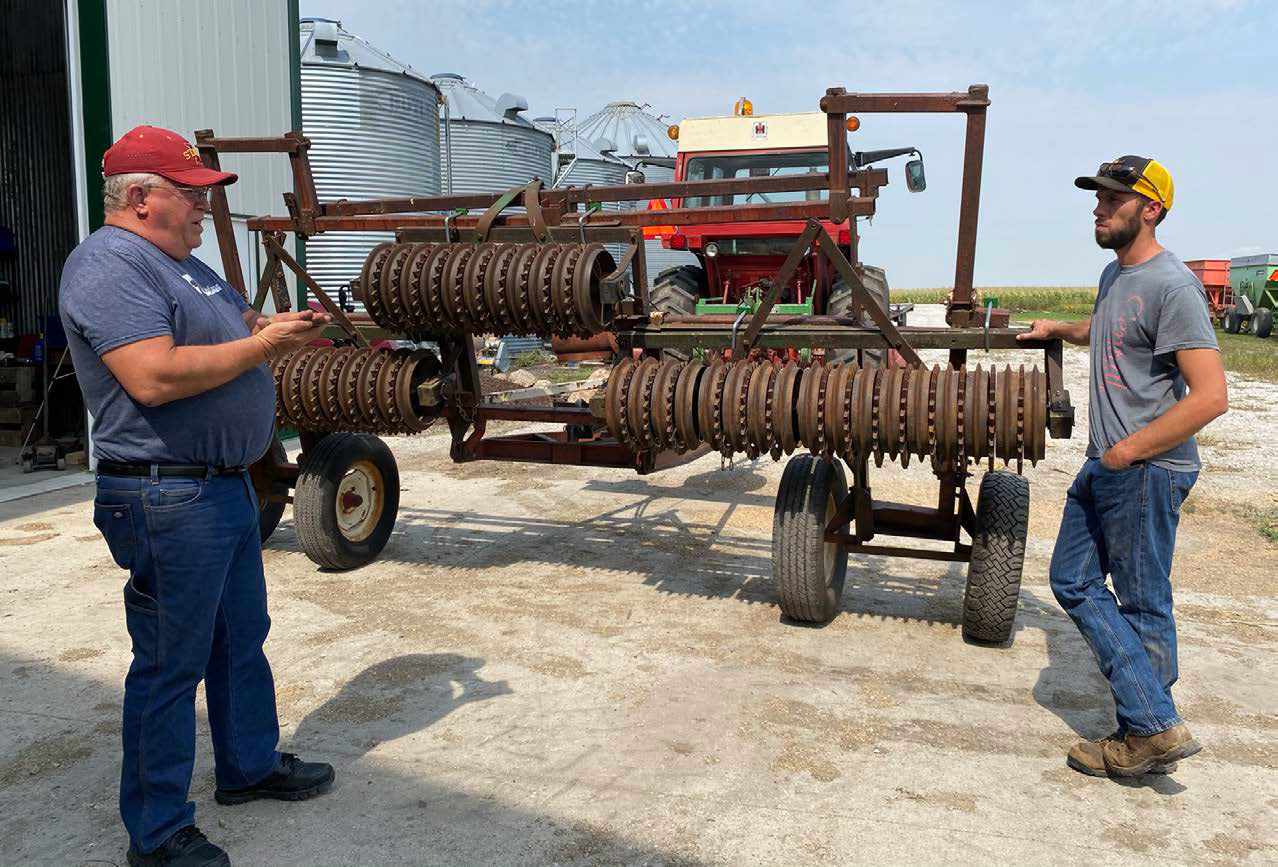 Pat Murken, of Story City, Iowa, explains to Emery Davis, of Crawfordville, Iowa, how to use the cultipacker.

As luck would have it, Pat was looking to gift his cultipacker to a beginning farmer at the same time Emery was ready to take the plunge into growing small grains, and they were able to connect through PFI’s network. The two spoke on the phone at first, talking for an hour-and-a-half about markets, production and profit. “It was just a really positive conversation,” Pat says. They next met on a sunny day in September 2021 on Pat’s farm. Emery not only received the cultipacker and its origin story from Pat, but also lessons on how best to use it. The hand-off was perfectly timed for Emery, who seeded cereal rye a few weeks later to grow for cover crop seed.

Looking ahead, Emery would love to see a third of the family’s farm in small grains. As demand for cover crop seed continues to grow, he sees potential in the market. Plus, he says he likes the benefits of planting a cool-season crop, which grows over the winter and is harvested in July. “A small grain followed by an early-planted cover crop should have big soil health and crop rotation benefits,” Emery says. “I’m excited to try it out myself.”

“We haven’t had small grains on the farm since I’ve been around. I see a lot of value in small grains to diversify the rotation” -Emery Davis

Pat will always credit oats with making his farm profitable for so many years, and he’s thrilled to gift a piece of his farm to the next generation. “It’s so refreshing to have such a young, enthusiastic gentleman take the machine,” he says.

For Emery, this will be the first piece of farm equipment he owns. For Pat, it’s a lasting part of his legacy.

Grazing Rates: What Is a Fair Payment?