Starting From Square One

The seeds of farming and living off the land were planted in DaQuay Campbell’s mind from a young age. Growing up in Cedar Rapids, Iowa, he recalls hearing his grandmother Rosie’s stories of being raised with her siblings on an Arkansas farm.

“They would talk about their life on the farm. That lifestyle seemed to be an important thing to them, and something they would think of fondly,” DaQuay says. “The farm was always this mythical place I would hear about growing up. So land ownership has always, in a way, been a dream of mine.”

Today, DaQuay is completing his first year raising pastured pigs at Black Oak Acres, the farm he started near Mechanicsville, Iowa. In the two years since he started pursuing farming, he has made significant strides towards his farming aspirations – and theon-farm life his grandmother described.

From IT to Farming 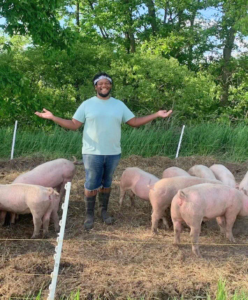 DaQuay Campbell smiling and standing amongst his Hereford-Hampshire pastured pigs at Black Oak Acres, presently based at Echollective Farm & CSA near Mechanicsville, Iowa.

Before embarking on his farm journey, DaQuay had an information technology job helping doctors and nurses resolve medical machinery and equipment issues. The job paid better than any he’d had before, but he didn’t enjoy it. “I really hated the job,” DaQuay says. “I would constantly leave work upset and go home not wanting to talk to anyone, especially after being on the phone most of the day fixing other people’s problems.”

As the oldest of five children in a household experiencing poverty, the responsibility of providing for his younger siblings often fell to him. As he got older, started a family and had to shoulder more responsibility as a young father of four children all under the age of 10, DaQuay says that bringing money home became his main focus and priority. “As a young adult, my thoughts were set on how can I make the most amount of money to escape my current lifestyle and have something that is my own.”

During the winter of 2019, DaQuay began to think of alternatives to his work-life balance. Originally, he was looking for ways to minimize the costs of feeding himself and his family, and he thought homesteading and starting a small farm business could help with that goal. But he realized farming was also a possible solution to his unhappiness at work. Farming in a self-sustaining way, however, required obtaining farming skills and accessing land.

“For someone like me who has no direct access to land or resources, I feel like I do not have the privilege to be a farmer. At times, I feel like I don’t belong. Farming is what I want to do, but it has been a challenge to figure out the right way to get started.”
DaQuay Campbell

“I was Googling farm training programs in Iowa and came across the Labor4Learning program, which is how I first became aware of PFI,” DaQuay says. “While I was on PFI’s website, I saw that there was an upcoming beginning farmer retreat that December. I knew I needed to get myself in front of people who have land to try and navigate potential opportunities.”

He decided to attend the retreat, and by chance, happened to sit across from Molly Schintler, who runs Echollective Farm & CSA with her farm partner, Derek Roller. It was a serendipitous encounter because DaQuay had seen an advertisement on PFI’s website for a position at Echollective through Labor4Learning that really interested him, and he had been thinking of applying. The two started chatting and DaQuay explained his background, interests and aspirations. “As I was giving her my spiel, she lights up and says, ‘you have to meet Derek,’” DaQuay says. “Three months later, I was out there working on the farm as their Labor4Learning trainee.”

Beginning farmers routinely use PFI resources and programs to receive the support needed to start their farm journey. Labor4Learning, which offers paid on-the-job training with our experienced farmer members, is one of PFI’s main beginning farmer programs.

DaQuay started working at Echollective in April 2020 and his farm responsibilities ranged widely. He helped put up a greenhouse, mulched garlic, prepared vegetable beds and helped pack, market and deliver veggies to the farm’s CSA customers, among other tasks. Echollective is mainly a diversified vegetable operation, but DaQuay also had a chance to gain experience working with livestock, his main passion – particularly pastured pigs.

Derek and Molly had been interested in having chickens on the farm but, prioritizing their other farm enterprises, didn’t have the time to raise them. DaQuay saw an opportunity to gain experience raising livestock on a larger scale. During his time at Echollective, he took on the challenge of raising 120 laying hens and adding the eggs to the farm’s CSA share. 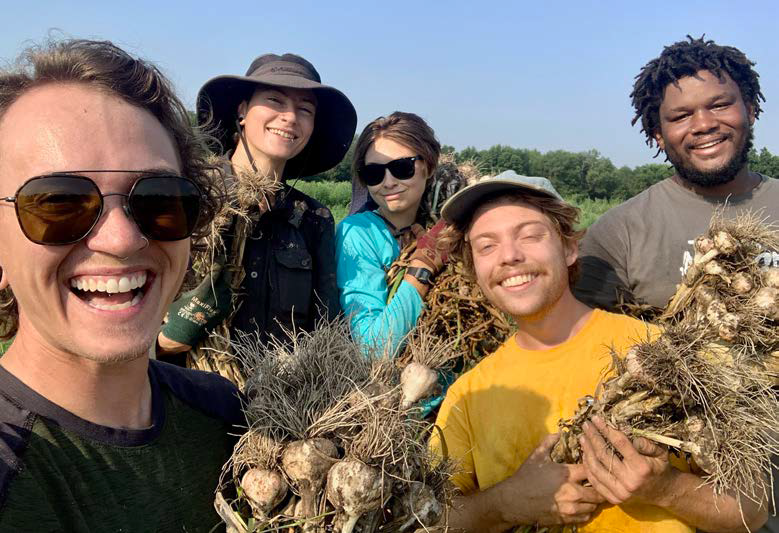 “There had been talk of wanting to have chickens on the farm, but there just wasn’t enough time for anyone to manage them,” DaQuay says. “Starting with chickens was beneficial for me because I was really intimidated by pigs, due to their destructive power.”

“Now after raising chickens and meeting other pig farmers, I know more about some of the ways to raise pigs with proper management. As someone with no prior experience raising livestock, being able to experiment with the laying hens on the farm allowed me to figure out if livestock was a doable fit for me.”

After working as a Labor4Learning trainee, DaQuay returned to Echollective for the 2021 season as a farm assistant. In exchange for two whole hogs, Molly and Derek offered DaQuay access to 1 acre of the farm for seven months to raise a small herd of 14 Hereford-Hampshire pigs. With that land access arrangement in place, DaQuay launched his farm business, Black Oak Acres, using regenerative practices such as rotational grazing and overseeding to encourage soil and animal health.

DaQuay’s interest in livestock stems from a general love for animals, formative encounters during hunting forays and his experience of food insecurity at home. DaQuay knew first-hand what it was like to not have much to eat at home. “Part of my interest in raising livestock comes from me wanting to have a rich, sustainable food source for myself and my family,” DaQuay says.

After participating in the Labor4Learning program in 2020 and raising pigs on his own in 2021, DaQuay feels that farming is now a legitimate dream. Connecting with PFI helped him gain more clarity about what’s involved with starting a farm – for instance, that he won’t be able to farm full-time right away. “The reality is that in order for me to become a farmer and make a living off the land, I’ll need to work an off-farm job and access additional capital while also searching for the right land opportunity,” DaQuay says. 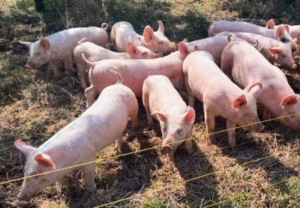 In 2019, PFI conducted a beginning and aspiring farmer survey, which offered deeper insights about who these farmers are and the obstacles they face. From those surveyed, three main obstacles emerged: access to land, business development and start-up costs. Half of respondents said they will not inherit or purchase family land, and 60% will need to rent or purchase farmland to start or grow their farm businesses.

For many beginning farmers, access to land is tenuous or completely out of reach – and for aspiring and beginning Black, Indigenous, Latino and other farmers of color, the hurdles to land access can be even steeper. Those seeking land need to figure out how to pay for it, which can involve navigating complex systems, knowing about programs or groups that can help, understanding how to convince banks to lend them money or even having the right personal connections.

“As difficult as farming is, it is 1,000 times more difficult for someone who has no cultural context or connection to farming,” DaQuay says. “For someone like me who has no direct access to land or resources, I feel like I do not have the privilege to be a farmer. At times, I feel like I don’t belong. Farming is what I want to do, but it has been a challenge to figure out the right way to get started.”

“The farm was always this mythical place I would hear about growing up. So land ownership has always, in a way, been a dream of mine.”
DaQuay Campbell

Land seekers need to know how to craft a business plan that reflects their unique vision and farm goals – and usually need to have a strong plan before they can access money for land. Then, once they’ve secured land to farm, they often need to pay for needed farm structures, machinery and other infrastructure to build a profitable and lasting business.

“Growing up, we are sold this idea that we all started at square one in life, and I don’t believe that is true,” DaQuay says. “I would say I started in the negatives. When I started farming I began to ask myself: How can I both provide a living for myself and my family that doesn’t consume my soul, but feeds it instead?”

Creating Something Bigger Than the Struggle

Through PFI’s beginning farmer programs, DaQuay has also found a vital source of support during a journey he says has felt especially arduous. “I haven’t really talked about just how hard it has been to be a dad, a worker and a farmer who’s learning all at the same time, and to be in a world that is completely foreign to me – it is a culture shock.” 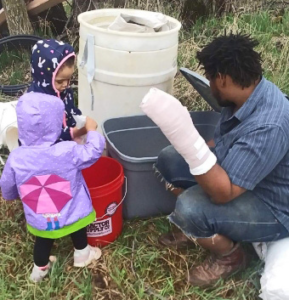 DaQuay with his daughters Aliza and Aurelia.

Before working at Echollective, DaQuay says he had never seen garlic in its natural form, and never eaten a radish or kale. “I would never have had the opportunity to even come this far without PFI, without the Labor4Learning program or without Derek and Molly. Being able to work at Echollective was an extremely crucial part of me being able to start my own farm journey.” He encourages those aspiring to farm to be flexible and patient, and to realize there will be hard days where doubts will seem especially heavy.

“On one particular day where I just wanted to quit everything, Derek shared something with me saying, ‘Now you have the experience and you have to cash in on that knowledge.’ Be receptive and forgiving with yourself because mistakes are going to be made,” DaQuay says. “Be flexible in your vision and understand that things might not shake out exactly how you thought they would in your head. But that doesn’t mean that they can’t shake out in the end.”

Despite the difficulties, DaQuay feels empowered having been able to expose his four children – Adrian, 9, Anna, 7, Aliza, 3 and Aurelia, 2 – to farming. “I want to instill in them the understanding that they can make a difference,” he says, “that they can create something that is undeniably positive and bigger than the struggle.”

We Are Each Other's Harvest