Farmers from Aurelia, Avoca and Reinbeck, Iowa, were re-elected to PFI’s board during January elections 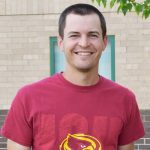 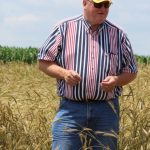 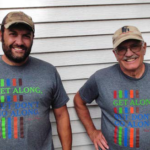 AMES, Iowa (Feb. 18, 2022) — Three farmers serving on Practical Farmers of Iowa’s board of directors were re-elected in January to serve another term on PFI’s 12-person board of directors, which consists of 10 farmers and two non-farmers.

Nathan Anderson, of Aurelia, Iowa, David Rosmann of Avoca, Iowa, and Jack Boyer, of Reinbeck, Iowa, will each serve another three years on PFI’s board. Together with the other farmers on the board, they will help to ensure farmer priorities continue to guide and ground Practical Farmers’ work.

Nathan Anderson operates Bobolink Prairie Farms with his wife, Sarah, sons Fletcher and Finn, and other family members in Cherokee County, raising row crops, small gains and hay and managing a cow-calf herd and cattle finishing operation. Nathan was elected to his third term, and also serves as vice president of the board.

“I’m really privileged to serve as a board member,” Nathan says. “It is the most exciting thing I have done in my farming career and I’m very thankful for the opportunity to represent northwest Iowa as part of a farmer-led organization.”

Jack Boyer farms with his wife, Marion, in Tama and Grundy counties, raising corn, soybeans and seed corn. Jack also serves as a commissioner for the Tama County Soil and Water Conservation District, and has been widely recognized for his commitment to soil health and to using practices like cover crops and data from on-farm research to guide his decision-making in ways that strengthen his farm while protecting the environment.

“I’m an advocate for cover crops and PFI’s on-farm research program, which I think brings a lot of service to the state and beyond,” Jack says. “I look forward to continuing to work with PFI and helping represent PFI in the conversations I have with farmers about cover crops.”

David Rosmann operates Rosmann Family Farms with his wife Becky, daughters Maggie and Ellie, and other family members in Shelby County. The organic farm includes cattle, hogs, row crops, pasture, hay, popcorn and several small-grain varieties. David was elected to his third, and final, term on the board.

“Practical Farmers of Iowa has been a part of my life for a long time, and it’s been quite an honor to have been on the board with PFI for several years,” David says. “There’s a lot of great ideas and pretty large passion for this organization, and I’m excited for what the future of PFI can bring.”

Practical Farmers board members serve in many capacities, from ensuring PFI is fiscally sound and our programs remain effective and farmer-focused, to providing leadership, advice and direction to staff.

These individuals are among the hundreds of Practical Farmers of Iowa members who serve in leadership roles within the organization, working in ways as diverse as hosting field days, conducting on-farm research, speaking with the media, serving on committees, volunteering at events, mentoring beginning farmers – and more.