Our Role on the Landscape

Jane Shey is no stranger to complex conversations and long-term goals involving agriculture. For over 30 years, she has worked in federal and global ag policy, research and consulting. But after returning to Iowa at the onset of the COVID-19 pandemic, she is more earnestly working on a complex agricultural project closer to home: cultivating her role as advisor to her mother on their family’s farm.

Returning to the Land

Jane grew up on the family farm near Algona, Iowa, where they raised crops including hay, oats, beans and corn, along with cattle and horses for 4-H. Once Jane left for college, her path back to the farm was non-linear, but never strayed far from agriculture. 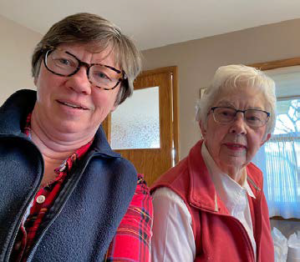 After attending nearby Briar Cliff University in Sioux City, Iowa, she studied in Belgium and worked as a consultant to industry trade associations, the U.S. Department of Agriculture and the U.S. Agency for International Development. From her policy background, she is most proud of her role in helping to get money to farmers during the 1980s farm crisis and in drafting the Farmers Bill of Rights.

Jane returned to the family farm after the death of her father, Jerry Shey, in 2019. While she’s still active in policy consulting, she also helps her mother, Jean Shey, manage about 1,600 acres, of which Jean is the majority owner. In this role, Jane works with the farm’s five tenants to implement soil health and conservation practices. A large part of this is building relationships with the tenants. “I’m still trying to learn and understand where they’re coming from,” Jane says.

Starting Where They Are

So far, two tenants use cover crops, which is a priority for Jane – she wants the land covered to protect the soil and prevent further topsoil erosion. Like many farmers getting started with cover crops, Jane’s tenants primarily use cereal rye. Because cover crops are uncommon in her area, Jane says the practice attracted the attention of some locals. “It wasn’t the pretty black rows everyone is used to,” she says. By mid-summer, however, Jane heard the tone change as people saw the quality of her soybeans. “Maybe it’s an advantage I have, moving back here after being gone for 30 years. I don’t really care what anyone thinks, so my goal is to be the talk of the coffee shop.”

“There has got to be a back-and-forth between the landowner and the tenant about each other’s goals, how they can come together and how we can help each other reach our goals.” – Jane Shey

This year, they’re also trying a new strategy: planting soybeans into living rye, a practice known as planting “green.” When possible, Jane also works with her tenants to adopt other practices. “One tenant is using cover crops, no-till, strip till – and I am working with him on relay cropping soybeans,” Jane says. The tenant crop-shares a 10-acre experimental plot with Jane, and together they plan to test the relay cropping this year. In the future, they also plan to test adding oats to the rotation. Cover crops are few and far between in northwest Iowa, so having one tenant as a resource with whom to work out the details is not lost on Jane. 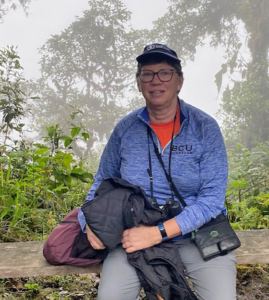 A view of Jane Shey

“There’s a lot of things I would like to try, but I don’t have any equipment,” Jane says. “So I have to work with my tenants and see what their comfort level is.”

Part of her approach to working with tenants is fostering a more reciprocal relationship. Jane says she is happy to share her ideas with the farmers and partner with them – both financially and in shared learning – to build confidence in her ideas. “PFI is a resource I turn to for cover crop-specific information I can use to inform my decisions,” she says, noting that she often shares PFI materials with her farmers and provides background knowledge on new practices when possible. “I try to not only say I hope we can do this, but I am also trying to give them resources to figure out new practices like cover crops or no-till for themselves.”

To make her farmland stewardship goals a reality, Jane knows she shares responsibility with her tenants. “Landowners have to be willing to bear some of the risk,” Jane says. The newest tenant has started to incorporate a rye cover crop onto a portion of the 160 acres he rents. He and Jane worked together to create a plan that included cover crops while reducing the financial risk.

The agreement stated that Jane would pay for the cover crop seed and application on 80 acres. On the remaining 80 acres, the young farmer would use conventional methods he was familiar with. “We paid for the application and the seed, and in my mind that’s the way to say that we’re going to share some risk with you,” Jane says. “He cash-rents the land, so all other expenses are his.” 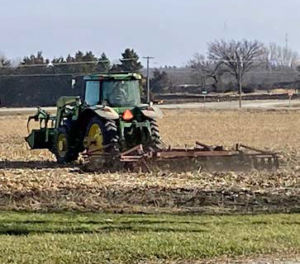 One of Jane Shey’s farm tenants seeds cover crops, which are a priority for Jane to protect the soil and prevent further topsoil erosion

The farmer received the added benefit of getting a $5 per acre discount off his crop insurance as a part of a state cover crop incentive program. Jane believes that setting a new tenant up with cost-share resources will help ensure cover crops are feasible for him to do on his own in the near future. She also believes that crafting attainable goals with the farmers allows for tangible change to happen on the land. “For 2022, I hope to encourage this farmer to get oats on the full 160 acres he farms in August,” Jane says, “so he achieves a good stand before the frost kills it.”

On the surface, exchanges between landowners and tenants are business transactions, but for Jane they are also opportunities for a partnership.

She says: “There has got to be a back-and-forth between the landowner and the tenant about each other’s goals, how they come together and how we can help each other reach our goals.” Although not common now, as more landowners adopt this approach, a new normal may be on the horizon.

Jane also sees her role as that of land steward. She recalls the crop and wildlife diversity that existed on her farm when she was a child – “butterflies of every kind, meadowlarks, riding horses through pasture.” These memories fuel her hopes of restoring soil health and biodiversity through on-farm practices – and this goal is the primary aim of her land management.

“When I was growing up, we had pasture, hay, oats, beans and corn, and now it’s just a corn-bean rotation,” she says. “If you spent time to think about or write down what you don’t see anymore, you realize what we have lost by giving up that biodiversity.”

She also thinks it’s possible for landowners to adopt conservation practices in a financially feasible way. She encourages landowners to view the topsoil as an investment account, and to approach soil as an asset that landowners could be more involved in preserving and adding value to.

“I think there is a way that landowners can protect and improve the soil and make it work financially, without taking everything out of the soil,” she says. “If you had an investment account that dropped 5% every year, in a couple of years you would be switching your advisers.”

For instance, to help finance efforts to bring back some of that diversity, Jane takes advantage of federal conservation programs. Currently, of the 1,600 acres she manages with her mother, 300 acres are in various Natural Resources Conservation Service programs. Restoring crop diversity is another focus. In addition to expanding use of cover crops, bringing oats back into the farm’s rotation is one of Jane’s goals. A small-grain rotation that includes oats and clover keeps more roots in the ground through the winter and creates more opportunity for different cover crop strategies.

Jane has no shortage of ideas. From her diverse experiences and exposure to many types of agriculture, she is interested in how rotational grazing, grass-fed beef, pastured poultry, pollinator habitat and crops like edible beans might work on the farm. Ultimately, Jane’s views are shaped by her understanding that she’s only a temporary steward of the land.

“It’s not about ownership,” she says. “It’s about trying to do something different and steer away from following the status quo. It’s about building relationships, figuring out who you can work with – and knowing you only occupy the space for a while.”