At River Root Farm near Decorah, Iowa, Mike Bollinger and Katie Prochaska have made some changes in recent years.

When they established River Root Farm, Mike and Katie grew “one of everything in the seed catalog” on their small, diversified market farm. Their goals changed when they started a family, however. They shifted their focus to raising only those crops they could grow in higher volume, with a higher price point and better profit margins, thus improving overall profits. 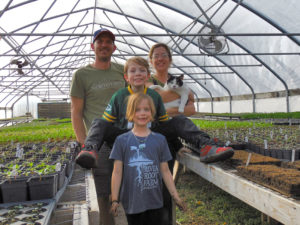 “We have transitioned into wholesale production, so we need to use our high tunnel space to focus on volume production of the five things we grow: baby kale, baby arugula, baby Asian greens, lettuce mix, and spinach,” Mike says. “But if we grow one crop as deep as we can into the winter, it would be spinach. It can withstand really cold temperatures and not degrade.”

Dan Fillius, commercial vegetable specialist with Iowa State University Extension and Outreach, adds that winter spinach is uniquely sweet and says this, and the reason why it’s so winter-hardy, has to do with its biology. “The plants use sugar concentration in cells as a natural antifreeze,” he says. “So when spinach freezes, the cold weather brings out more sugars and a sweeter flavor.”

River Root salad greens are packed into five-ounce clam shells and sold in bulk to area cooperatives and restaurants. Mike says, “We saw the market opportunity for greens to be in growing unique things in our region and replacing crops shipped in from California and Arizona.”

And they’re getting pretty close. In 2021, Mike and Katie grew and marketed spinach 50 of 52 weeks, and a loyal customer base seeks out their product. “When we didn’t have spinach those two weeks,” Mike says, “we had produce managers calling us because customers were calling them to plan their shopping around when our spinach would be in stock.”

Mike projects he and Katie could as much as triple their current high tunnel capacity and still only nick the Midwest market demand for winter-grown spinach. With 26,000 square feet of current space in their high tunnels, that is an eye-opening statement.

At Lee’s Greens near Nevada, Iowa, Lee Matteson has had a similar experience with his winter spinach production. Spinach is frequently the most popular option in his winter salad greens CSA, which he offers from November to March, along with wholesale and a la carte sales. This creates an off-season market that keeps cash flow consistent through the winter months. 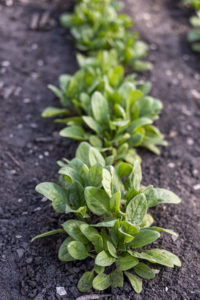 Winter spinach in the spring

For the 2022 winter season, Lee is planning an overall increase in the amount of spinach he produces. Of his six heated houses he uses through the course of the year, he plans to shut three down following harvest of the last fall crops. Two heated houses will house hydroponic production of lettuce, kale and other salad greens, and one house will be used entirely for in-ground spinach production. That one will be unheated, both to save on energy costs and to produce a “crunchier, flavorful crop.”

“If I cover the spinach with cloth, like Reemay, it provides just enough protection – an additional four to five degrees – to get the crop through the winter,” Lee says. “I can plant in September and get five or six harvests from one planting of spinach. You have to time the harvests right, but it regrows time after time.”

“Spinach can go through several freezes,” he adds. “It’s just so tolerant. We could definitely sell more spinach. We haven’t hit a ceiling in that market yet.”

Time It Well, and Handle With Care

Timing is a key factor throughout the production cycle of any fall crop, starting with the timing of seeding. This is true of any fall crop, but for spinach – which, with luck and good management, will be in production through multiple cuttings over four to five months – it is especially important to plant seeds at the right time. At River Root Farm, spinach gets direct-seeded on Sept. 10.

“The margin of time is incredibly thin during this period,” Mike says. “Missing planting dates by more than a couple of days can result in a significantly delayed crop, which can mean missing the market opportunity presented by Thanksgiving sales in the fall.”

Careful handling while harvesting is another critical factor. Though spinach is quite durable to temperature variations, the leaves require a gentle touch and deft cuts. Mike and Katie do much of the harvesting by hand with knives. They find more quality control employed at harvest results in a better-packaged product. They have also found that making cleaner cuts results in better regrowth and contributes to the long-term production viability of the crops. 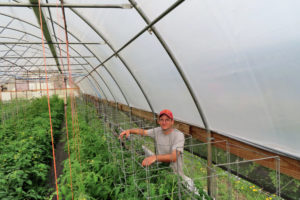 While harvest at Lee’s Greens works a bit differently, Lee and his team take just as much care in their process. Lee prefers cutting the whole spinach rosette, rather than individual leaves. He finds that timing the harvest at the right stage encourages faster regrowth.

“If you harvest too late, it will regrow more slowly,” Lee says. “Actually, [spinach] grows back faster than lettuce and other crops that can’t handle the frost. It yields better poundage overall, and I find customers like the mix of sizes in their orders.”

When asked why growing spinach in winter is so special, Dan gets excited. “It’s distinct to have a crop that feels out of sync with the outside world,” he says. “Plus, the flavor is incredible! The stems are like candy. It captures the imagination.”

Dan spent years as a commercial vegetable farmer in Michigan, Minnesota and Iowa before leveraging his extensive knowledge about farm management, production, season extension and all things veggie to support Iowa’s commercial vegetable industry through his role at ISU. His vision for what is possible with a crop like winter spinach is intriguing.

“The dream is to have a customer base that is as enthusiastic about winter spinach as they are about the first sweet corn,” he says. But Dan’s vision extends beyond spinach. He sees potential for targeting other unique markets, and believes season extension offers farmers and consumers alike the opportunity to completely rethink seasonal production – along with the potential to change lifestyles. Winter spinach is just the beginning.

“There’s a case to be made that greens – perhaps particularly spinach – can generate more dollars per square foot than even tomatoes,” Dan says. “So don’t make them an afterthought. Make them a real focus.”

In advocating for winter spinach, Dan sees opportunity for not only a strong market but also for work-life balance. “You can work less hard,” he says. “I’ve even seen farms in other parts of the country flipping their production seasons by going all-in on winter greens production and taking summers off.”

Mike and Katie knew that growing their business in a way that sustained their operation along with their lifestyle and mental health meant they had to take a different approach.

Says Mike: “We found that with the shift to fewer crops and focus on wholesale, growing all through the winter can ultimately reduce the pressure placed on summer production by distributing production, sales and marketing throughout the year.”

And while other crops may also become sweeter with cold exposure, spinach reigns as a customer favorite. Hardier than lettuces yet more tender than kale, winter spinach is durable, versatile and compelling, with a sugar-rich flavor that can’t be beat.

Yet growing winter spinach is a practice in cognitive dissonance; it feels somehow upside down to plant during harvest season, harvest when snow flies and deliver fresh, bright leaves during the coldest days of the year.

But those attributes are also what make winter spinach production special. It means tapping into a unique market, developing a dedicated following of customers and expanding what is possible in the vegetable farming lifestyle.

For the farmers who grow it, winter spinach lands in the sweet spot.

Getting Started with Greenhouse Production