Journey of a Beginning Farmer

About Stennie Nelson and Tuuli Farm 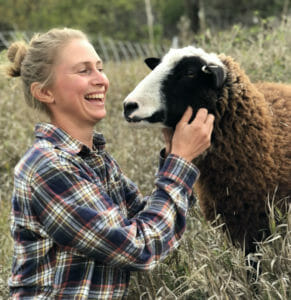 Stennie Nelson leases 30 acres in Turin, Iowa, where she raises sheep and continues to try to create a diversified landscape that not only is beneficial to the sheep, but also to wildlife on the land, as well as the land itself.

She graduated from Iowa State University for landscape architecture, and learned how people use the landscape, think about the landscape, and how humans make decisions about how we manage the land and what that means for our impact on all the layers of the landscape, from hydrology to ecology.

Stennie worked in habitat restoration for three years in California right out of college, but she missed working directly with animals. After she left that job, she worked in a number of states as a seasonal farm intern, gaining farming experience.

“It has been a 10-year journey of going back and forth between conservation nonprofit jobs and hands-on farming work. I like to do the work. I like to have my hands in it. I like to be experimenting.”

When she was a kid she would show dairy heifers at the County Fair through a 4-H program for town kids and started to grow a passion for livestock at a young age. She didn’t know what would become of it or how it would play out, but that’s a big part of why she pursued those farm internships and eventually led to her owning sheep during her time in Vermont.

In Vermont is where she came up with the name of her farm.

“Wild Carrot Farm and Fairwinds Farms are two farms that shared the land where I was incubating my fledgling sheep business. I wanted to connect the names to create a name for my farm. I had joked about “Wild Winds Farm” but I brainstormed more names. I had been an exchange student in Finland on a dairy farm – my first experience actually living on a farm – and I found out that Tuuli means wind in Finnish.”

After living in Vermont for four years, she decided to move back to Iowa and brought the name Tuuli Farm and her flock of sheep with her.

Stennie says that the name of her farm fits well with her current location being in the Loess Hills of Iowa, which were formed by the wind after the glaciers melted. At Tuuli Farm, Stennie sells yarn from her flock’s wool, grassfed lamb and lambskins directly to her costumers or through One Farm Market.

Moving Back to Iowa

Stennie moved back to Iowa in June of 2021, and says that even though she had a great network in Vermont, getting back to the Midwest was important to her.

“I was living in Vermont and had a few options to stay, but it wasn’t quite what I was looking for. I really was looking to be closer to family and back on the prairie.”

She said she attends the PFI conferences because it was a fun way to learn about what else was happening in farming, and to start to understand that there is a lot more than corn and soybeans happening in Iowa.

At the Practical Farmers of Iowa virtual conference in January of 2021, she was able to find an opportunity to move back to the Midwest.

“This landowner posted something during a shepherd presentation about having this acreage for lease in the Loess Hills, so I started corresponding with him, and through the help of some close friends, I was able to take that opportunity to move back to Iowa.

Stennie was familiar with certain conservation programs due to her background in conservation. “I wanted to figure out which could support me in doing what I wanted to do here on this land.”

Along with that she says the possibility of grazing animals in such a way that allows all the other wildlife that live here to thrive as well is a big part of the reason she got the sheep. She really enjoys the grazing management.

“I enjoy seeing and observing what ruminants are eating and how to estimate what they’re going to eat in a day, or in a couple days. That kind of problem solving is a very active ongoing (sometimes relentless and daunting) thing.”

She says that there is money available to help farmers do conservation and that it was just about which programs would work for her to help her get started.

Being a Beginning Farmer and the Use of EQIP

EQIP helped Stennie increase her capacity and buy more fencing called ElectroNet. She can fence in more areas than she could before. She says it can help a farmer or landowner pay for what you’re already doing, and it can give them a little nudge to help do the thing you’re thinking about doing.

“There is this whole fencing section of equip with the goal to help incentivize people to rotationally graze, not just set stock.”

Stennie said she has seen great rates for beginning and minority farmers.

“[Our district conservationist] has been helpful. It can be kind of daunting because there’s a lot of different program options and understanding how it all works and depending on your DC, I think it could be difficult sometimes maybe to get through the beginning stages, but she’s been helpful at answering questions and explaining all the parts and pieces of the process.”

It was helpful for her to be able to talk through her production goals regarding the sheep and what this land needs in general. Then taking the next steps with her DC to figure out how EQIP could help her reach those goals.

“There is a huge manual of options that can be part of the EQIP program, and that’s exciting—maybe something you didn’t know about would be a really good fit on the land.” For example, “cost-share for portable electric fence, other practices I have in my EQIP are brush removal and forage-seeding for pasture renovation – both to improve grazing quality with an eye towards also benefiting the habitat in general.”

She said what got her excited about the program was that she could get a payment for something she wanted to do anyway. It helped incentivize her to actually follow through and that she could receive payments for things like time, equipment, supplies or whatever else she needed.

“I spoke to the landowner first and when I was starting this ball rolling he was worried about some aspects of it and wanted to make sure he understood what the long-term responsibility would be. We setup a meeting with the DC, my landlord and me. We looked at the maps and talked about the practices we wanted. Any questions he had, he was able to get answers in that meeting.”

She says the more questions you ask the better, and making sure you are clear about what your responsibilities are and that you’re on the same page all along the way.

Stennie mentioned that EQIP typically pays after the work is completed, so there can be cash flow challenges.

“There are upfront costs, and since it’s a cost-share program, it won’t necessarily cover 100% of the cost. It is important to still budget for yourself.”

Because of potential cash flow challenges, she asks questions like: what works for me to pay up front? What is the actual cost of my ElectroNet (or practice) and is that fully covered? How much am I going to have to pay for it, and how much can I afford to pay versus what they’re able to pay towards it?

“I think it’s the timing of the payments that can be a challenge because it is really helpful funding, but if you can’t get the cash beforehand, it can be a little bit of a challenge.”

She also says knowing what you are signing up for, reading the terms, and understanding the timing of the payments are important. She points out that producers interested in EQIP should keep an open mind when going into the process.

“It can be challenging to think about your projects ahead of time,” she mentions, but my DC really helped me out with that.”

She says figuring out timing and being kept in the loop when waiting for approval, being told that her DC hadn’t heard anything yet, was still beneficial.

“I also think too like the willingness to pick up the phone and just make the call, like if you haven’t heard for a while just call. My dad would always say, ‘just go stop by, that’s the best way; they can’t avoid you.’ ”

Stennie says that the fact that she’s renting her land with just an annual lease is also a big challenge. “You won’t see the true benefit for years, so I might not see the benefit of these practices on this land. It can be hard to weigh what makes sense to do for my business on land that I may not have long-term access to.”

“I might be here that long or longer,” she says. “But if I’m not, I’d rather leave the land better than I found it.”

Stennie knows that even if some practices won’t directly impact her business, the economic bottom line in terms of increasing some grazing ground here, or the production of good forage at least is good for the land.

Some of her favorite things she has learned is that she sees how resilient the sheep are.

“It sounds a little bit cheesy, but just their friendship. Whenever I am feeling really daunted, I have always valued having individual relationships with my animals as much as possible because this was about me and the sheep and this land. How can I have two feet on the ground? That kind of connection for me with my animals, with the land, and with the customers, how do I stay grounded in that when the learning curve feels too steep.”

Stennie also mentions that some of the hardships she has faced is that farming can feel isolating. She says, “we’re all just working towards similar bigger goals, but still we’re all in these far-flung places.”

She says you should stay connected with the people you connect with and always be willing to make that call. “I still call one of my Vermont mentors,” she says.

A few other tips she has is trusting in your own knowledge that you do already have, being willing to try something yourself without someone else’s permission, and with that always having a “sounding board” to help you think through an idea or a project.

“Learning to lean into the confidence of just making decisions and doing things, being more into experimental mode of just seeing what happens, there probably isn’t a right answer, but just trying to figure things out and go with it.”

Stennie is not only a beginning farmer, but being a women farmer has also brought some challenges. She said she can feel self-conscious about the knowledge she has and whether she knows enough but she said she is always willing to ask questions.

“I do a lot of research I think that’s partly just what makes a good farmer in general. That might be somewhat gendered in terms of how I’m afraid people might perceive me, but I think part of that for me is not having grown up on a farm, so I do have a ton of questions, like I don’t know how a lot of these systems work, and I don’t know what is “normal,” so coming from a beginners mind I try to just stay curious and have an open mind.”

Connect With Stennie on Social Media:

What Do Practical Farmers of Iowa Farmers Have in Common? Commitment, Context, Carbon and Community

It Takes a Village to Raise a Beginning Farmer

Finding a Path Through Livestock and Mentors